How it all began 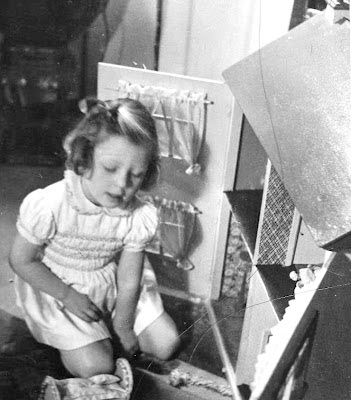 I suppose it began with the Christmas just before my fourth birthday, nearly seventy years ago.   Although it was just after the war had ended, and there were few toys in the shops, my father commissioned someone to make me a dolls house - standard design, front opening, four rooms inside including a proper staircase and fully furnished, with soft furnishings made by my mother.
It was my favourite toy and I was devastated when it disappeared just before my eighth birthday. 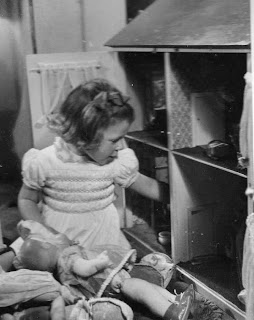 It came back in a new incarnation, repainted,  with the roof gone, two extra rooms at the top, balconies and a fabulous roof garden.  I was thrilled and the house always had pride of place in my bedroom

Years passed, I left home, became estranged from my mother for a while, and when we became friends again I was horrified to discover she had given the house away to the granddaughter of a friend.   I tried frantically to locate it but by then it had passed into other hands and I never found it.

I suppose you could say that I have been looking for it ever since and when my own daughter was four I decided that it was time to find a house for her.   Nothing in the shops pleased me so I advertised in the local paper for a large old dolls house, condition immaterial.   I ended up with four large old dolls houses, none of which went to my daughter - she ended up with a very plain one, as close to my childhood dolls house as I could find (though I always felt the roof was on the wrong way round) - and that's where the collection started, forty years ago.   At the last count, which was some time ago, it appeared that I own about thirty houses and forty more miniature items such as shops, market stalls, creations in unusual containers and a substantial library of dolls house books and magazines.

At the moment I can't actually check the numbers because most of the collection, with the exception of a few particularly cherished houses, has been in storage in the garage for over ten years. This blog aims to chart the journey as it comes to life again and moves to a small museum in a village in the Czech Republic where I now make my home for part of each year.