As we enter Easter Week 2022 I return, as promised, with Sylvanian Spring Part Two - we have been outdoors in the Sylvanian village so now it is time to take a peek inside the houses and other buildings to see what is going on.
I have in the meantime travelled a long way in the real world and am spending a few weeks in England prior to making my way back to Bavorov in early May to finalise getting Small Worlds ready for the summer season. We hope, if nothing gets in the way - but who can predict that nowadays? - to open on Saturday 18th June, with normal weekly opening hours following on from then.
This will be a word-light, photo-heavy post, showcasing Butterfly's work setting the scene, telling the stories, and taking the photos whilst I sat and admired her endeavours.
She painstakingly explained to me that in order to reverse the scene accurately, the buildings had to appear from left to right, rather than from right to left as in Part One.  (Or vice versa - I am the first to admit that the reversing of shapes and patterns is a total mystery to me, even when carefully demonstrated!) 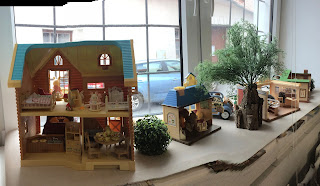 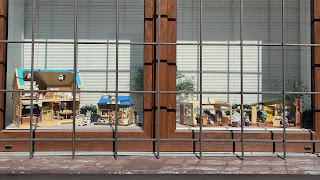 So starting on the far right when looking into the window we have the water mill, which houses the baker's shop, known for its delicious Danish pastries.  (Although we call them Danish pastries, the Scandinavians call them Wienerbrød/Wienerbröd = Viennese bread). 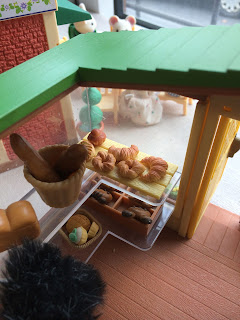 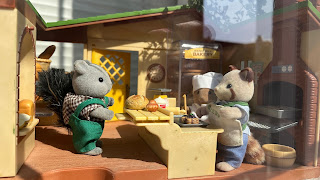 No Wienerbrød for Grey Squirrel today though, just a plain loaf and a roll to match.
Tucked neatly between the baker's and the café handily next door are the café tables, not a seat to be had as usual, especially when the sun is shining.... 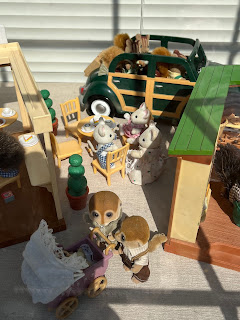 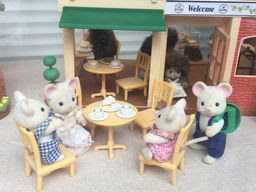 Meanwhile the proud parents of Mimsie Meercat are considering whether to wait for a space or head home having bought some pastries from either baker or café to go with their coffee. 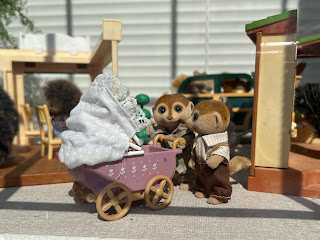 The café next door - buying much of its wares from The Water Mill - is busy.   The Hedgehogs are choosing their morning treats and little Master Hedgehog, in despair at not being able to see properly, has climbed up for a better view. 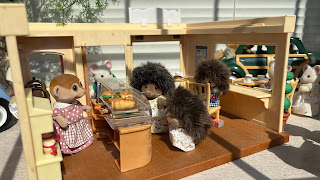 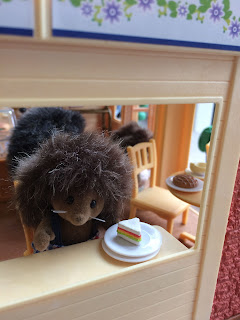 Moving along the street we come to the sort of shop no tiny village should be without - the Dollshouse Emporium!
In the summer, the owner prefers to mount a display outside, leaving a rather empty shop, but in the spring it is safer to keep the houses safely indoors, away from the April showers..... 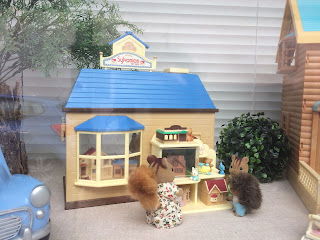 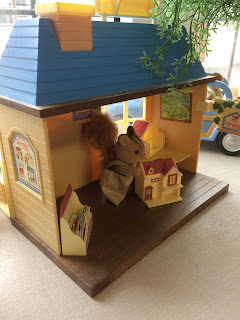 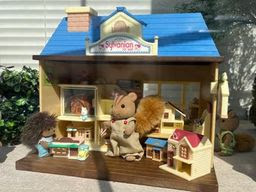 And finally we reach Rabbit Range, an imposing house with much space - which is sorely needed since after all these are rabbits and we know all about their breeding skills! 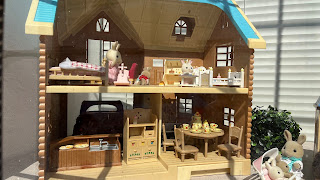 Despite the house's size, as you can see, it has been necessary to convert part of the garage to gain enough space for the ever-increasing family.... 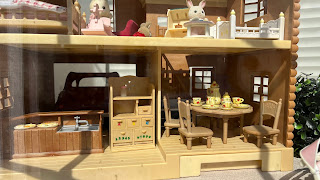 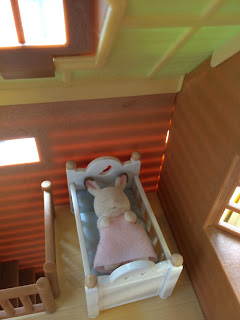 Mrs Rabbit really can't afford to take her eyes off her brood for a moment - look, there's one heading for the stairs while she's waving to Mr Rabbit outside.... 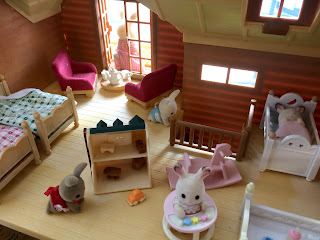 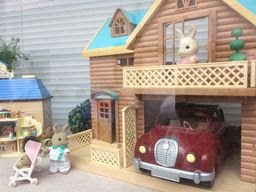 And by the time she gets in - oh no! There's two of them - let's hope she is just in time! 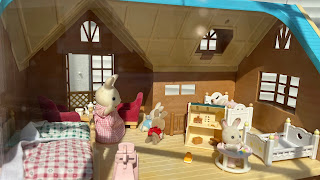 So that brings me to the end of the update into springtime goings on in Sylvanialand and it just remains for me to thank Butterfly for all her hard work and to wish you all a very Happy Easter! 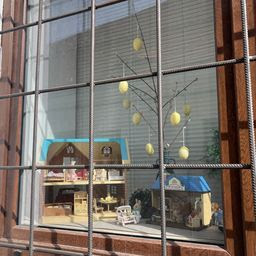 Well - just one more thing. I hate to end a festive occasion without some music but seriously - did this ever catch on?
PS I recently gave a talk about Small Worlds to a group called the Collectors' Studio. It was done on Zoom and can be found now on YouTube. There is a written list of associated links I am happy to send anyone interested.
Posted by Cestina at 17:24 10 comments: