Going Dutch - or anyone for coffee? Part 1

It's appropriate that the first house (if you don't count my granddaughter's which I am about to release from the museum) which I prepare for display in the Czech Republic should be linked to coffee.

When my father arrived in wartime England from Czechoslovakia he joined a coffee merchant's office and  soon he set up his own company, which is still in the family.   I kept well out of it, life in the City never appealed to me and so I took a very different route from my brother.   But I still enjoy the bonus of a monthly delivery of Pure Colombian coffee - as do my friends!

So when on a visit to Dordrecht in Holland many years ago I saw a perfectly preserved 18th century coffee shop on the market square, I was immediately tempted to try to reproduce it as faithfully as I could.

This is one of the houses that was not banished to the garage ten or so years ago and it was therefore an obvious one to bring to Bavorov in the back of the car this year. Firstly it was accessible, unlike all those covered in dustsheets and cobwebs, and it was in a reasonable state so suitable for a quick restoration.

The coffee shop is downstairs, and upstairs is a music room, also late 18th/early 19th century in style.   The shop is full of tiny containers of coffee and many pots and coffee machines so I emptied it into a series of shoe boxes (market stalls have provided most of our packing cases so far for the big move!) and carefully swathed the delicate grand piano in tissue paper before packing it into yet another shoe box.

It's just as well that I did empty the house since when we came to pack the car we discovered it had to go in on its side......

I've enjoyed revisiting it because it's reminded me of all the things that I did to create it, so many years ago.

The house was built, some time in the 1990s, from a plan that I found in a Dutch dolls house magazine.  The builder, Norman Randall, was the newly retired husband of a CAB colleague.   She was wondering out loud what she could suggest for him to fill the time hanging heavy on his hands.   A blessed inspiration made me ask if he enjoyed woodworking.   Not only did he enjoy it, but he launched himself into dolls house making with great enthusiasm and ended up making several houses for me.    Both he and Sheila became avid miniaturists, joining the local Herts group.   There will be more about Norman's skills and Sheila's amazing miniature knitting abilities in a later blog.

Norman handed over a bare wooden shell and I was then left with the interior and exterior decorating.   I was determined to find a way of reproducing brickwork rather than resorting to brick paper.   I am fairly sure that the method I finally settled on came from the wonderful book, Decorative Dolls' Houses, by the founder of the Kensington Dolls House Festival, Caroline Hamilton.   If you only have one dolls house book, this is the one I would recommend - she gives so many brilliant tips for how to achieve the effects that you want. 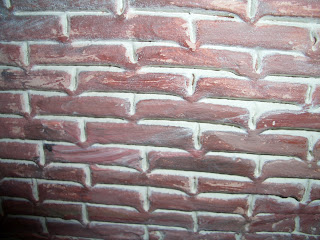 Getting a brick effect on the walls would have been much easier had the house still been in pieces so that the walls could have been flat on the table, because the method involves mixing up a strange concoction of white paint, powdered polyfilla and white glue. This then has to be applied to the walls very fast so that it doesn't dry before you can mark out the bricks.  It's also tricky to get the right consistency so that  it doesn't slide down as fast as you get it on. 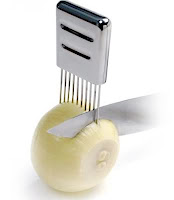 across the walls at once - and then I marked out the bricks individually with vertical lines.   Then you mix up some brick colour, trying to keep a sort of swirly effect rather than a one-colour mix, and carefully sponge it over the surface so that the white "grouting" still shows through. Very, very messy! 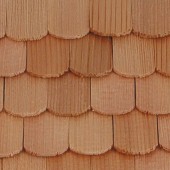 But I was pleased with the effect and so then turned my attention to the roof.   Some years earlier I had stocked up with wooden shingles which had been languishing in a bag at the bottom of a cupboard for use "one day".

Cue for a short digression:
Dolls house and miniature making is a terrible "one day" hobby - "One day I will make that shop I have been planning for years", "One day it might be fun to make a Japanese house" (it was - great fun), "One day I will think of a use for all those empty party poppers"... Actually I did manage that too as you can see in the photo of the bar in a wine box I made for a friend. 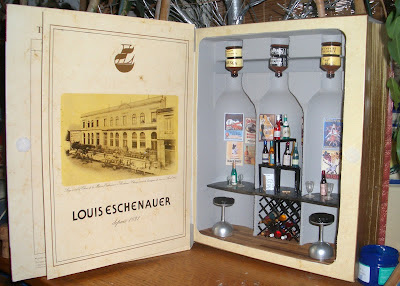 He was proudly showing me the box and without thinking I said "Oh,that's perfect for a miniature setting! "  So he took me up on it.  I think by the time he got it (that "one day" syndrome again!) he had forgotten he had ever owned a wine box....

But back to Holland...

The wooden shingles clearly couldn't be used straight out of the bag.   The colours had to change.   I went and stared at some roofs in my road and realised that tiles weather to different colours so that I definitely should not just stain them all one colour.   I can't actually remember how I got round the problem - I certainly didn't stain each tile individually. 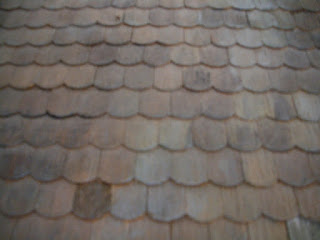 I know that I glued them on first and then stained them.   The gluing is very fiddly, you start with the bottom row and work upwards, carefully overlapping them.   This was the end result and once again, I was quite pleased with the effect.

The last bit of the exterior that had to be tackled, apart from painting the very tiny window bars dark green on the outside and blue on the inside to match the interior decor, was the decorative gable.   I maybe couldn't quite rise to this: 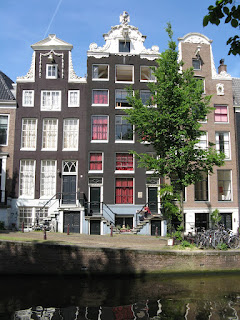 but I thought I would have a go.....I wonder if anyone reading this remembers Liden whitewood furniture?   One used to be able to buy plastic curlicues and other ornamental bits to stick onto drawer and cupboard units to make them more interesting.   I had found some in a shop dealing in bankrupt stock and had immediately transfixed  them with a miniaturist's eye.   Everything is grist to the mill (I feel another blog post coming on....)

I dug them out from yet another cupboard, along with a similar ornamentation in metal.   No idea where that came from.  I suppose it might have been intended as a belt buckle.   I then bought some sampler pots of stone paint, which is slightly gritty, and mixed up a pleasing colour.   I painted all the exterior that wasn't brickwork with this concoction, after first gluing the plastic and metal thingies into appropriate positions.   The date I formed using a tube of polyfilla.  It ended up like this: 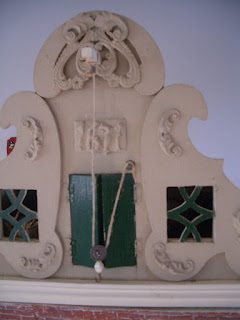 If you've stayed the course so far you finally get a view of the exterior of the finished house. 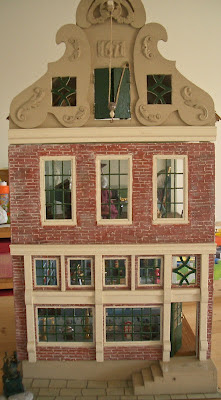 The next post will delve into what went on inside.   And maybe by the time I write it I will have seen the room the town council are thinking of for my museum. I'm very excited.....

Hope you are still with me on the journey!