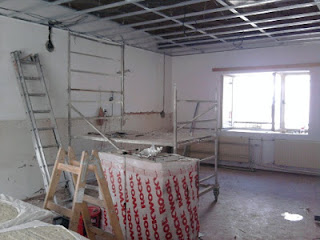 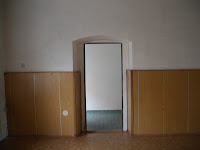 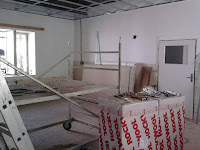 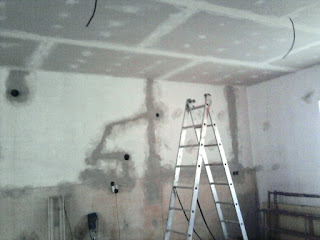 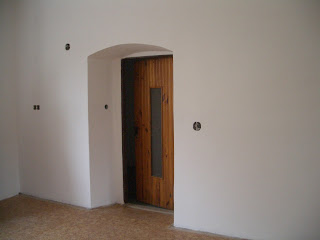 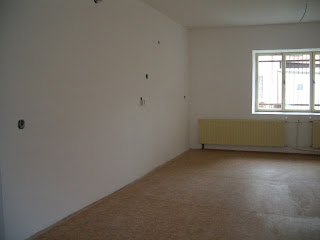 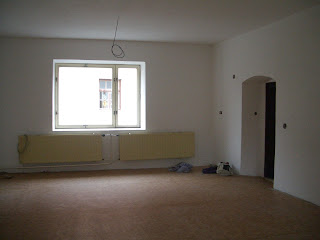 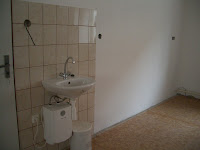 I have been very silent over the past weeks haven't I?  I see with horror that my last post was almost a month ago.   I have had an excuse (well several excuses actually). The first one, as some of you will know, is that we have had a second Giant Book Sale which has involved much shifting, shelving and pricing of books, stepping over cartons, mountaineering past bookshelves hauled from other parts of the house.....None of this could have happened without the indefatigable help of the amazing Jo who has been untiring in her efforts - thanks Jo!   (And thank you too for preventing murder between self and daughter on occasion.)

Warm thanks to everyone else who has helped with the book sale or who came to buy - I met a number of lovely people who share my hobby of collecting Girls Own books - school stories and other books written for girls. 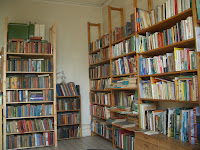 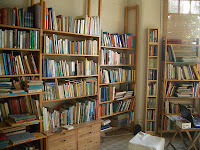 Our "bastelroom" looked like this and that's just down two walls.   The bay window is now also framed with books and so is the fourth wall.   The books are staying shelved until we actually move out of the house, probably early in the New Year, so if anyone wants to come and browse, do please make contact.

Some of you may be wondering what a "bastelroom" is so cue digression.

"Basteln" is a useful German word meaning "to do handicrafts", to "make something with one's hands" or even "to tinker".  When we first moved into our house about forty years ago one of the room's incarnations was as a kind of hobby room and the name has stuck.   This led to a confusing scene at daughter's primary school when she had to describe the rooms in her house and wrote about the "bustle room".  Teacher was deeply puzzled by its function....

I have recently discovered that "fröbeln", based on the name of the educationalist Friedrich Fröbel, is used in a similar sense, which pleases me greatly. 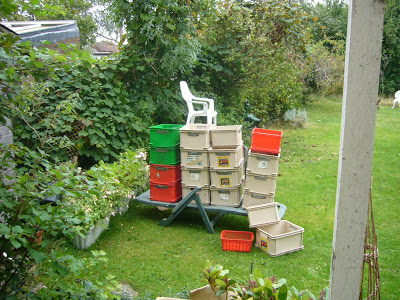 Alongside this feverish activity went a constant sorting of the contents of the many uniboxes (good heavens, they are still sold) which had made their way up from the garage over the past weeks.   Hurling each empty, dusty box into the garden to wash in the rain was a great feeling of achievement.   Too much chaos for son who then tidied them all up.

After reeling in horror at four quotations for the removal of the houses to the Czech Republic (one from Her Majesty's removal firm, no less - which left me wondering just what she needs to have removed?   A sudden decision to send a favourite piece of furniture from Buckingham Palace to Balmoral perhaps?) it has been decided to hire a Box Luton van which a friend will drive across at the end of the month.   Now we are just crossing our fingers that everything will fit in. 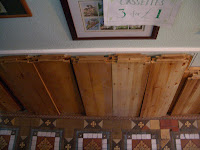 One advantage of my already heading across - at the moment I am staying at the airlock between my two very different lives, the house of one of my oldest and very best friends near Bonn in Germany - is that I can take proper measurements of the museum room and decide whether we can accommodate all of the larger display units or not.   There are four large upright oak cupboards (old BBC filing cabinets I think) which I plan to use on their sides as base counters for the display, plus quite a lot of shelving (seen above in a state of collapse) which is not intended for the museum but for my house there.    A couple of oak desks, also ex-BBC which will be the working surface in the museum for new house constructions are also poised to leave, and of course the many dolls houses, either bubble-wrapped or in giant cartons. 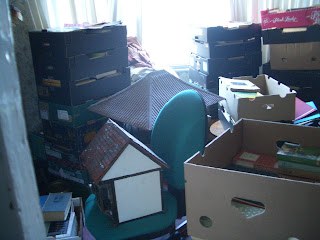 Just before the book sale our front room looked like this - note the fruit boxes filled with many books still to be shelved for the sale.


It then went through a stage of looking like this....... 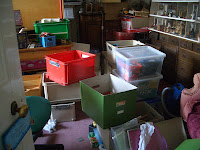 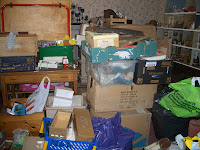 And by the time I left on Monday night the room looked equally full but now with a degree of order out of chaos as the houses gather prior to departure on 30th October.

The sticky task of finally readying them for 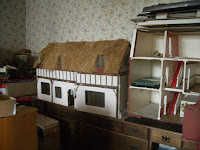 the van - boxing up some of the remaining smaller houses and bubble-wrapping the remainder will fall to my ever-helpful son and daughter, as will the loading of the van.   They are both delighted that I won't be around to interfere.......I'm quite happy too!   And eternally grateful to them for their unswerving support in this enterprise.

Thanks to everyone who is still reading at this point.   As I said, I am now en route for Bavorov and will be moving on tomorrow night, arriving there, all being well, on Friday evening.   I will then have to contain my soul in patience as I assume I won't be able to get the keys for the museum room until Monday.   After that I promise another blog post with photos of what I hope is a transformed room.

Now to think about a name for the museum that works in both Czech and English - all suggestions will be gratefully received!