A Merry Christmas, one and all!

Time for the last post of 2013, such an exciting year for me on the dolls house front.   I know many of you have followed this journey on my blog but if you want to read it in a less protracted form you can also find it in the on-line magazine on the website of Dollshouses Past and Present.  Part One is here and Part Two here.

The third part will appear in February, all being well.   There's lots of fascinating stuff for miniaturists on the website and a great deal of expertise to be found there too.

And so to the last item in the window display.  I apologise for the quality of the photo - if any expert photographers reading this can enlighten me about taking photos through glass without getting so many reflections, I would be very grateful. 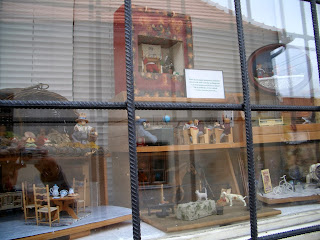 Perched right on top of the central breadbins you can spot a large paper bag intended for packing Christmas presents.  I remember that one year I had resolved never to wrap another present, so I'd bought a large quantity of bags of various sizes. When the dolls house group - the Herts Miniaturists - that I was a member of at that time decided that we were going to create Christmas scenes in a paper bag, I was spoilt for choice.

Cue slight digression:  the group was very much into putting room settings into unusual containers just then. It was one of our members, Norman Randall, who made several of my dolls houses for me, who first came up with the idea.   He produced a kitchen in an old enamel saucepan and then sent off photos of it to the Home Miniaturist magazine. (A little bird tells me that this creation is on its way to Small Worlds - thank you Sheila!)

His room-in-a-saucepan sparked a nation-wide competition and suddenly all the dolls house groups were thinking up unusual containers to put scenes into.   I particularly remember a large packet of washing powder with a launderette inside. The final winner of the competition was the plaster cast of a broken leg with a hospital scene inserted into it!

I think this was the same year that the Herts Miniaturists suggested "Christmas Past" as a theme for a room setting and since this blog post will be very short of photos if I only cover the Father Christmas-in-a-Bag - no photos of the process for example, because it all happened so many years ago - that I have decided to first give you a bonus scene that isn't in the window display.


Blog followers will be familiar with the photo that appears beside the "About Me" paragraph of my blog.   It is taken from a series of photos taken the Christmas Day I got my very first dolls house. Based on these, I was able to recreate our living room that day and attach the room setting to a photo frame, in the same way as I described in my last post.   This time it was a double frame, showing the original photos on one side and the miniature room on the other. 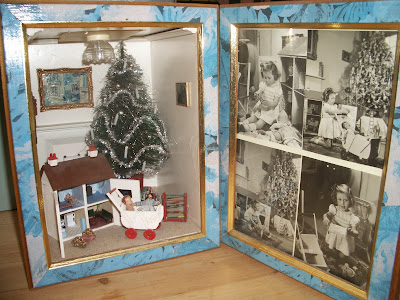 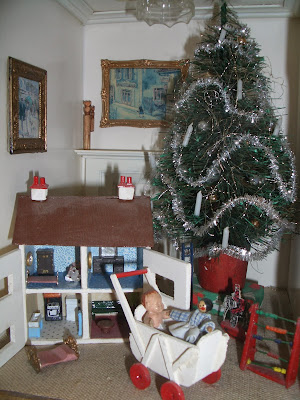 Everything that is in the original photos, I managed to reproduce in miniature.   Butterfly tells me she made the pram.   I believe her of course. The abacus caused a great deal of swearing, as did the tiny furniture in the house......

So back to Santa in the paper bag - it's once again very easy to do.   You cut a hole in the bag at the height you want and then build a structure to insert inside. You can use either stiff card, as (judging by the corrugations I can see) I did here, or better still, foamboard. 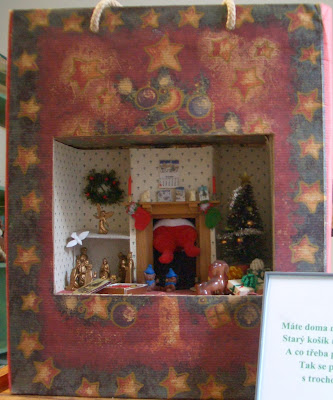 Foamboard, or Foamcore is polystyrene foam sandwiched between two sheets of card and it's brilliant stuff for crafting.  As is polystyrene of course - just a reminder, since it's Christmas, of the wonderful Christmas creches I featured at the end of this post last year.   All of them carved out of polystyrene.... 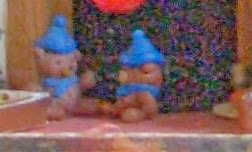 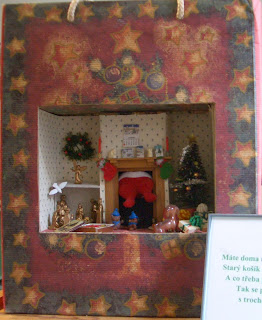 Poor Santa seems to have got himself into a slight pickle.   I rather think he's stuck.   Watching with interest at the foot of the chimney are two very early productions by Butterfly, tiny teddies made whilst she was recovering from her "A" level examinations. 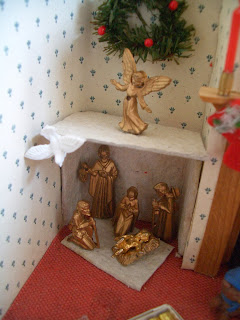 The only addition I have made to this very ancient scene is the Christmas creche in one corner......


I leave you with a close-up of the whole scene and the hope that Father Christmas makes it safely down your chimney on Tuesday night....... 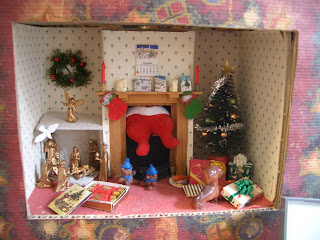 Thank you for continuing to follow this story.   I wish you all the very best for a joyous Christmas and a peaceful and happy New Year.   See you again in 2014..... 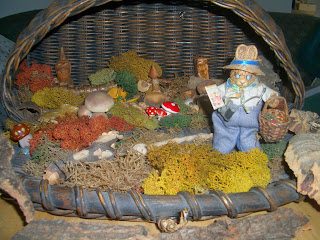 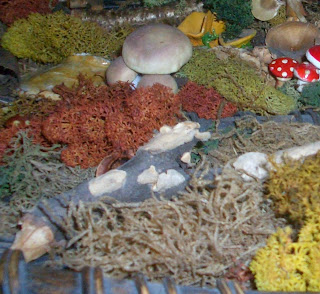 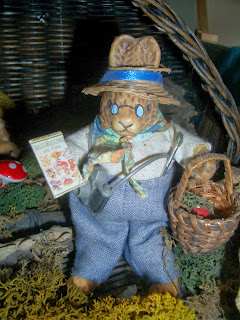 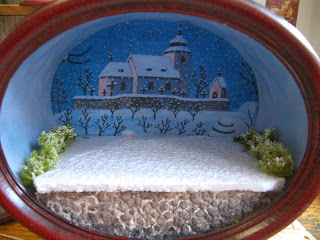 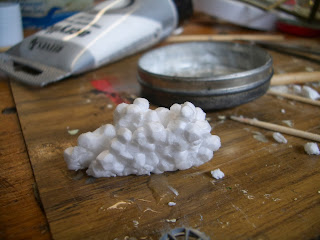 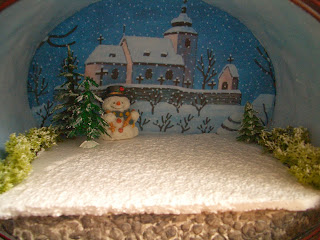 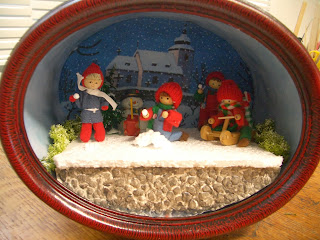