"Christmas is coming, the geese are getting fat..." as the old rhyme has it. So in early October, before leaving the Czech Republic for winter in the UK, I started to think about a new display window which I could set up in October but which would also be festive enough for the Christmas season.

My thoughts turned to that good old English tradition of pantomime, and from there to theatre, and entertainment in general.   Did I have enough material in my stash to create a world of entertainment without too much difficulty?

A search revealed that yes, indeed I did - I could cover drama, music, dance, puppetry, and that was before I even started hunting properly.... 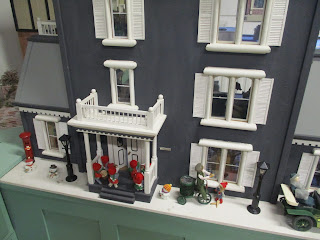 Some of Small Worlds was already set up for Christmas since, I am not quite sure why, I had never got around to removing the traditional Christmas scenes from the Walmer Victorian dollshouse.  You can enjoy them here.  Only the carol singers had returned home during the summer,  and my granddaughter kindly replaced them for me during her October visit.... 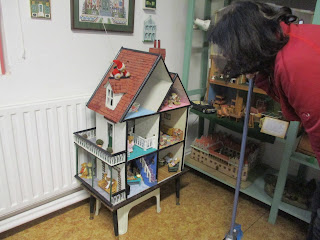 And Santa is back on the roof of  the Bear House which had been a feature of the Christmas window last year, and is now on permanent display in Small Worlds (without last year's seasonal decorations).  You can see it in detail here.

The first thing I put together for the new window display was a puppet show....... 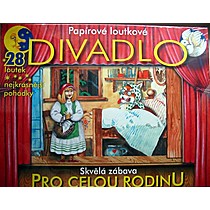 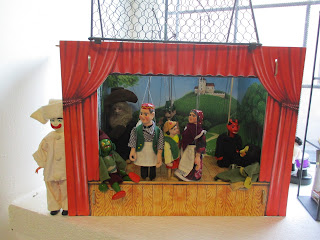 ..... easily done as I was able to use a Czech cardboard theatre kit which, with the addition of a metal roof (previously used as a railway station) to suspend the puppets from, and a traditional set of Czech puppets, was quickly ready to put in the window. 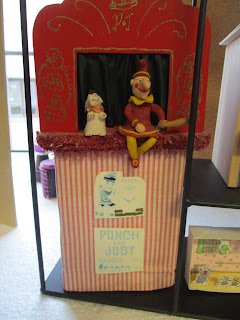 The string puppets are all ready to perform and now it's time to show off some glove puppets. This little Punch and Judy booth was made around 30 years ago for a fairground display set up by the Herts Miniaturist group I used to belong to - Punch was made by a fairly young Butterfly.

Cue digression: recently Butterfly and I went to see the film Judy and Punch, a somewhat unusual take on the tale of Punch and Judy, a true origin story in fact. It has some moments of real horror but we nevertheless thoroughly enjoyed it. A fable for our times....keep an eye out for it.

After setting up what a baby Butterfly (is that a chrysalis or a caterpillar perhaps?) used to call the Bump-a-Julie show, I found a tiny puppet theatre in my collection, bought last year in a UK charity shop. 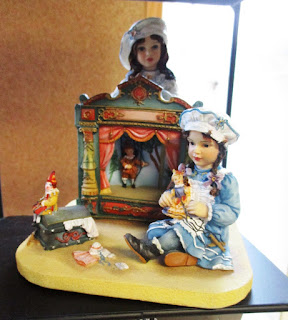 Pinocchio was headless so Butterfly had to create one for him.   Though on further inspection it is probably a Harlequin or Punch rather than a lying Pinocchio. (British political in-joke). 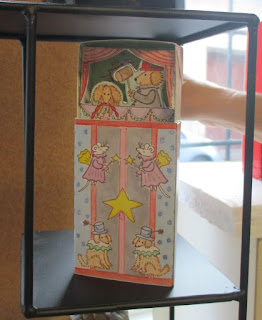 The tiniest puppet theatre I located was in a book called Little Boxes.  It is in matchbox form and size. 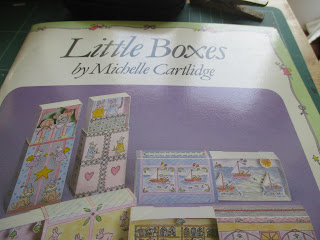 From the same book, came the minutest dance scene imaginable. 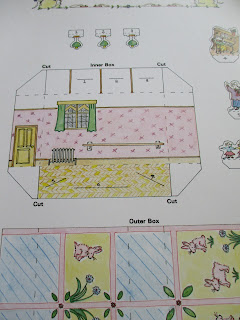 Cutting out is not one of my skills and there was quite a lot of it involved in some of the models. 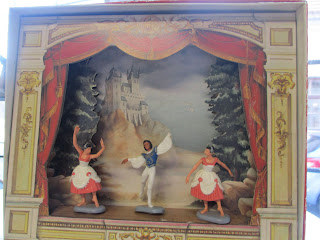 In another paper theatre there is a performance by almost the only complete dancers left from Butterfly's childhood set of Britains ballerinas.  Very sadly the box they were carefully housed in got dropped and the plastic must be incredibly brittle as many limbs just shattered into pieces.   I have them all and if there is a miniaturist out there who has any advice on the best glue to repair them I would love to hear about it. 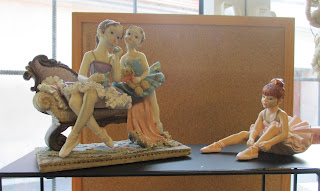 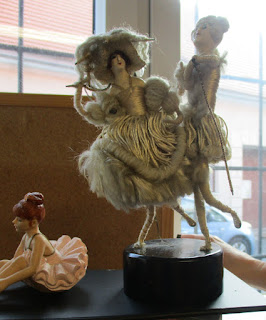 Some porcelain dancers also joined the troupe and were complemented by a somewhat exotic couple who remind me of characters in the slightly out of place dance scenes found in one of my favourite programmes, the New Year's Day concert from Vienna. 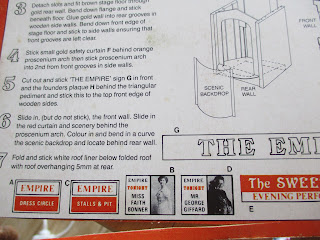 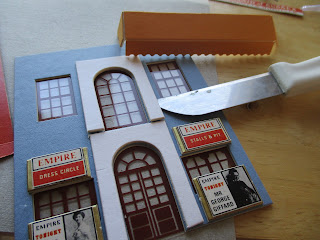 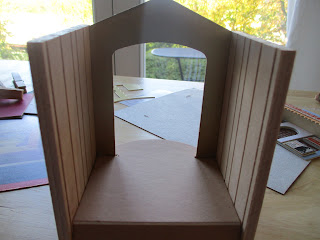 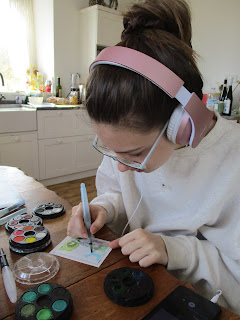 As I said, such work is not my forte and so I called upon my granddaughter for help in painting the scenery for The Empire Theatre. 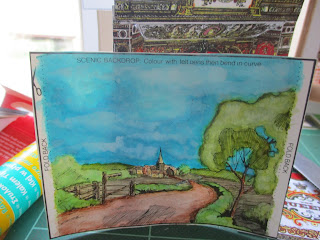 Annoyingly once all the scenery is in place and the curtain is down one can't really see into either of the theatres properly to admire her work. 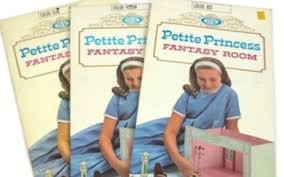 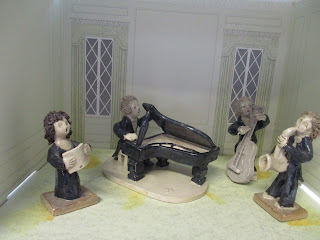 A vintage Petite Princess room provided the perfect venue for the slightly quirky quartet of ceramic musicians that I could not resist acquiring from a charity shop in the UK last year.  Just as I was preparing to display them I realised that the double bass player had mislaid his instrument.   A miniature cello from the stash proved too large so a somewhat rough wooden guitar was hastily painted with stone paint to match the rest of the group so that he could join in the fun. 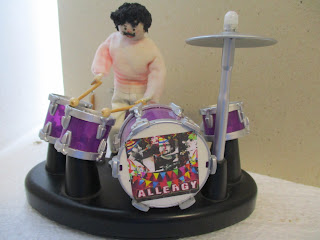 More music takes the stage as an homage to my son who is the drummer in Allergy, a popular band playing mainly in Hertfordshire and the south-east. 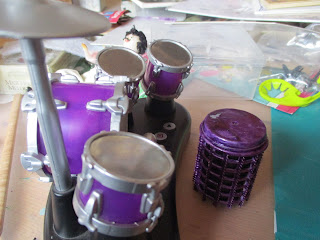 The drummer's seat required a little work to match the drum kit but an old photo container, half a hair curler and some glossy purple nail varnish did the trick.  Granddaughter again.... 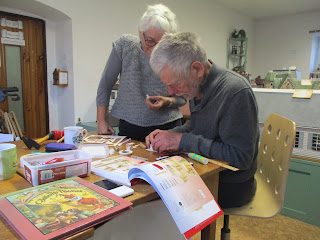 No display of the theatrical world could be complete without a nod to Shakespeare, particularly in view of Butterfly's other life. So the versatile Colin was once again in demand, constructing the tiniest Globe theatre you can imagine at very high speed - a change from Ollie the Osprey!  It sits on a board about two inches square (5cm)and is taken from the book Paper London, given to me by Lynda. 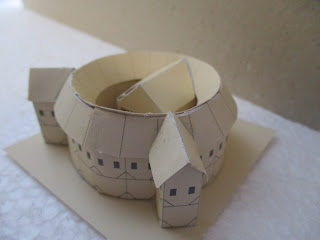 Last, but by no means least, the "big" theatre - and compared to much of the rest in the window it really is big - about 46cm (18ins) wide. It has appeared in Small Worlds before when I described restyling yet another charity shop find.

As usual, the window is set up with one corner reserved for a "reveal" much closer to Christmas.   So all there is to be seen for now is a theatre with the curtains firmly closed although there are probably rehearsals going on behind the scenes. 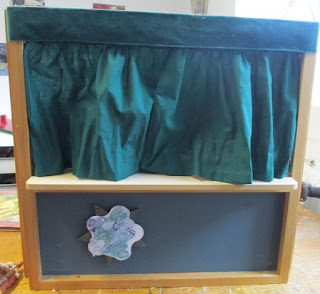 Opening night will be on Saturday 21st December, just in time for Christmas, so I hope you will come back then to enjoy curtain up! 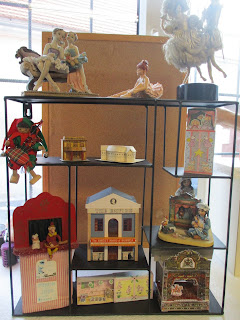 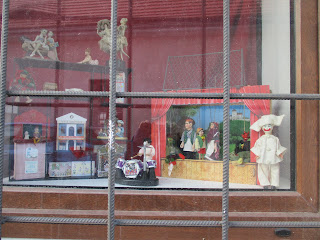 And finally, to help you through your last seasonal preparations, we must not forget that most accessible of all forms of entertainment, the cinema!