I start this post with some trepidation.   Not only is it over two weeks later than I promised it, but I fear it is going to raise some hackles.   In fact it almost raises my hackles because I have done something I never thought I would - I have fallen for a host of little creatures that are totally out of scale, not only with each other, but with their surroundings as well.

Long-time readers of this blog might remember a very early post on the subject of scale when I was rather scathing about the Sylvanian Families.   Well, strangely it was another of my passions - this time for reading mystery stories - that led me to look rather more carefully at the actual animals.   The protagonist's daughter in a book I read recently collected them, and the descriptions were so enticing I decided to take a closer look.   My granddaughter was with me at the time I was trawling the internet, and she pointed out how cute the meerkats were.   I felt the same about the hedgehogs.

I am fairly sure that the only families I set out to acquire were these two..... 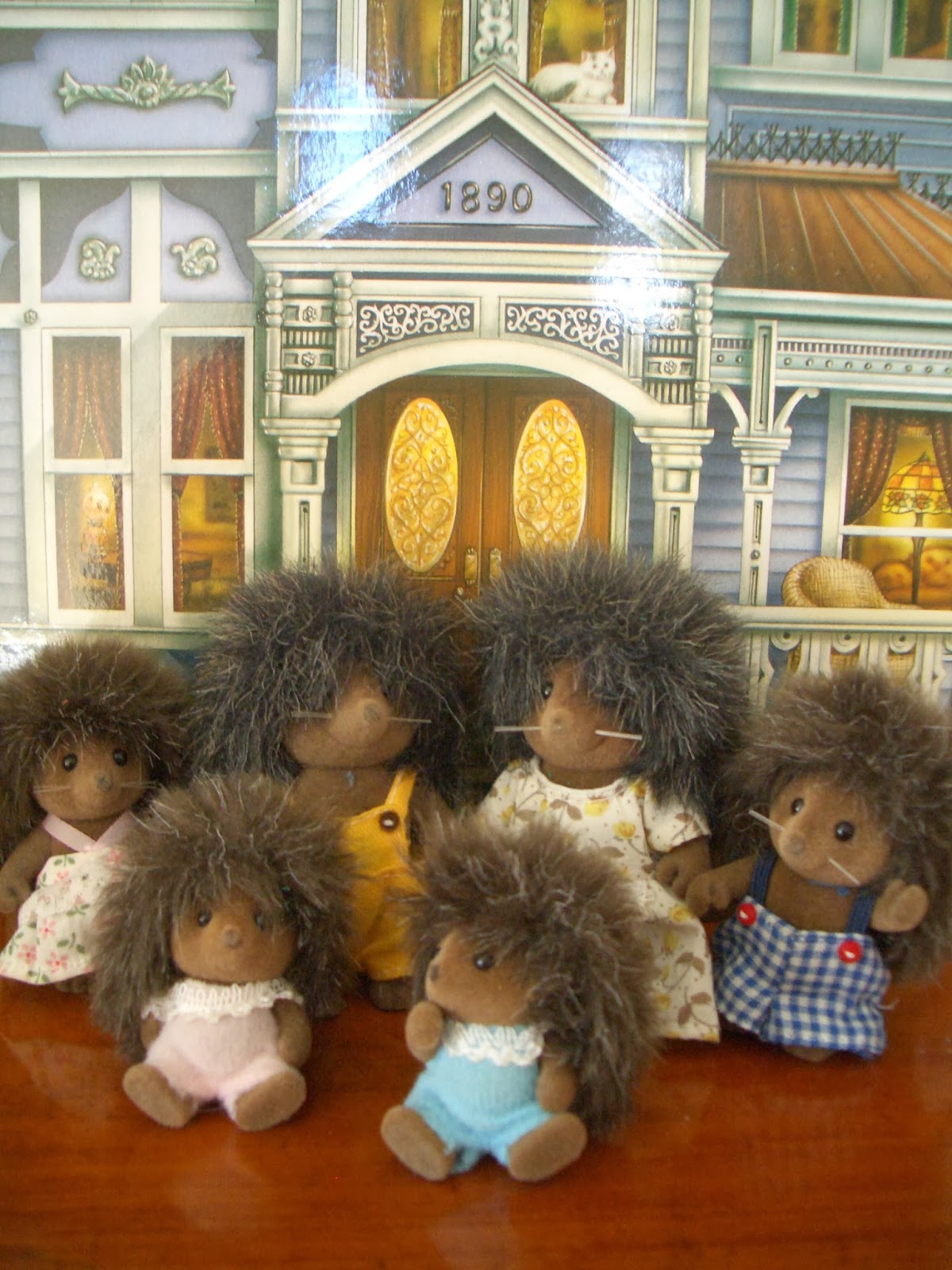 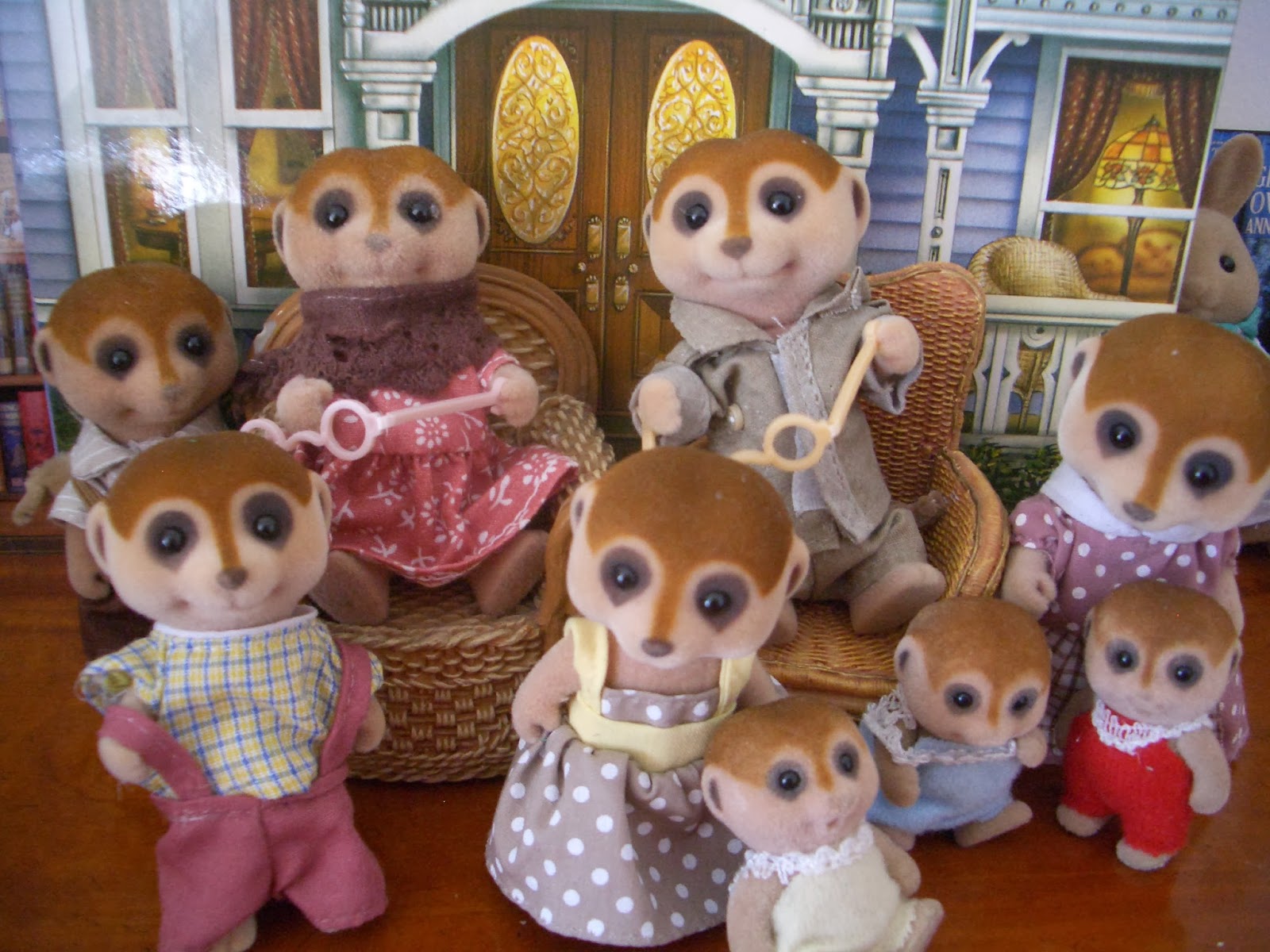 So how, pray, did this lot also get in on the act? 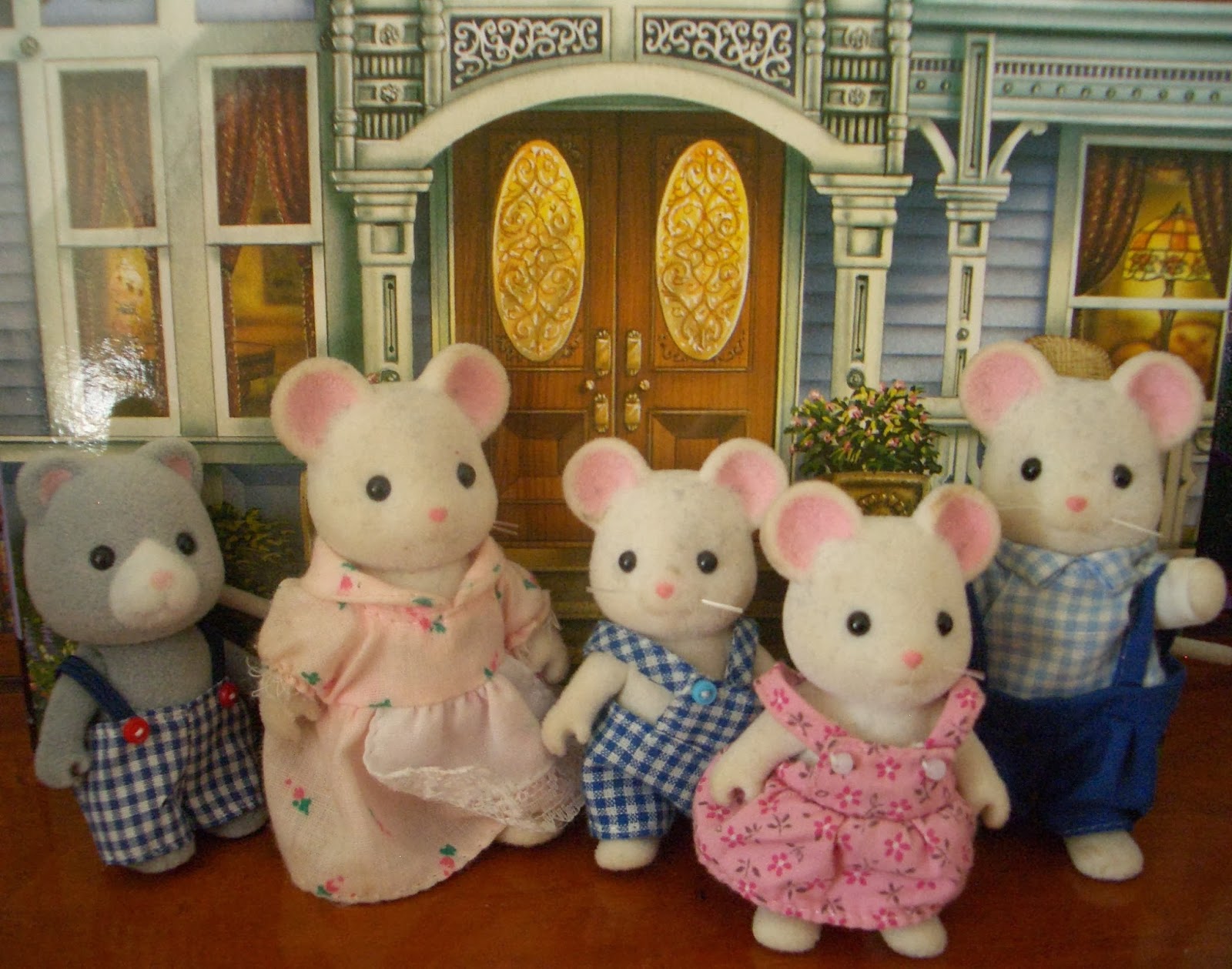 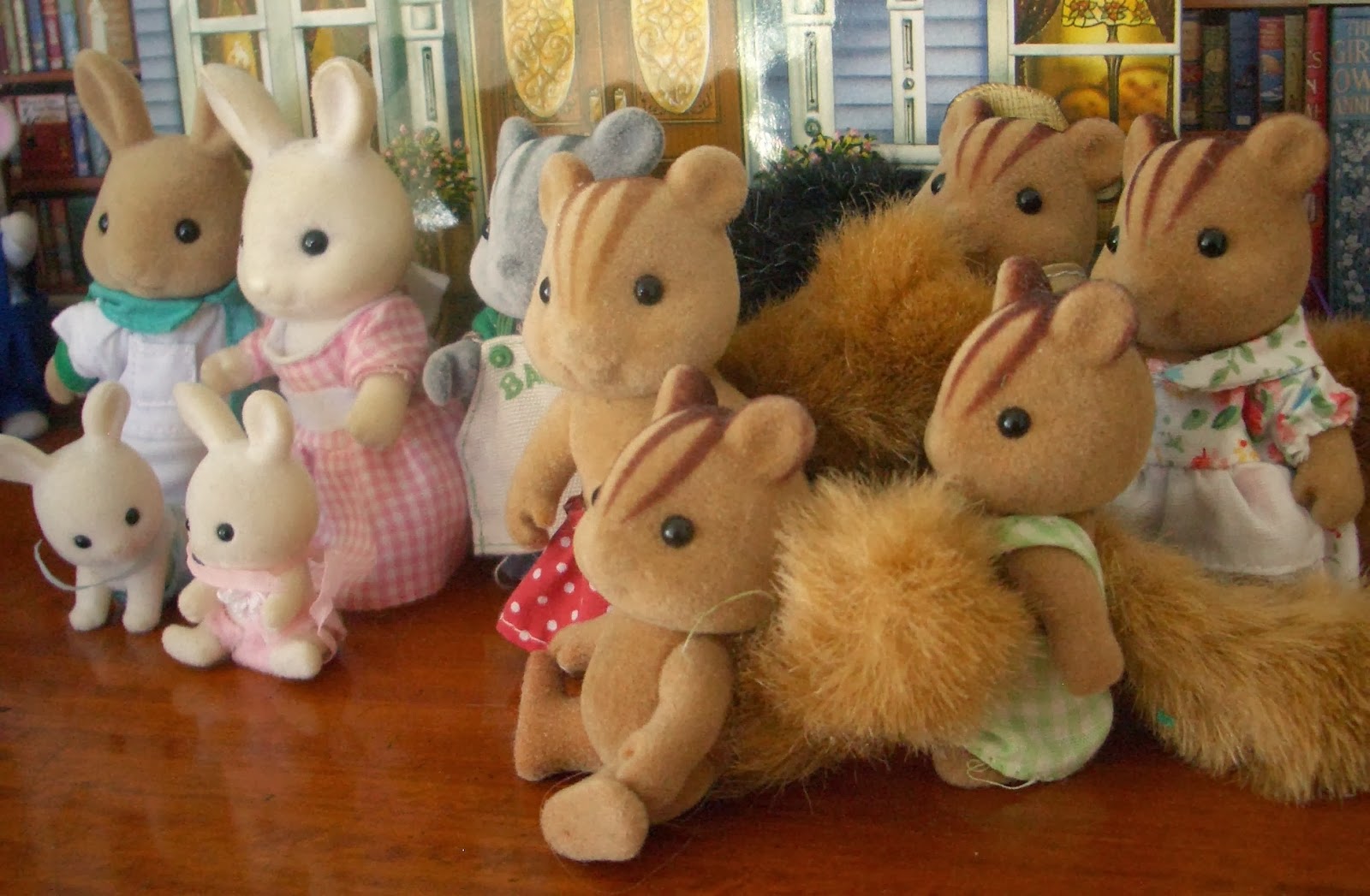 And someone must be hiding because I can only see 28 in the photos but there were 30 when I counted them in for the photo session.....

I am actually quite impressed with these little figures - scale aside of course.... in the third photo that's supposed to be a bear in with the mice.   They are very well made, arms and legs move, you can sit them down (tails permitting), pose them, and all the clothes come off.

I did, of course, also invest in a couple of houses for them - well, one small house and two shops actually.   I mean, how could a dolls house collector resist this one? 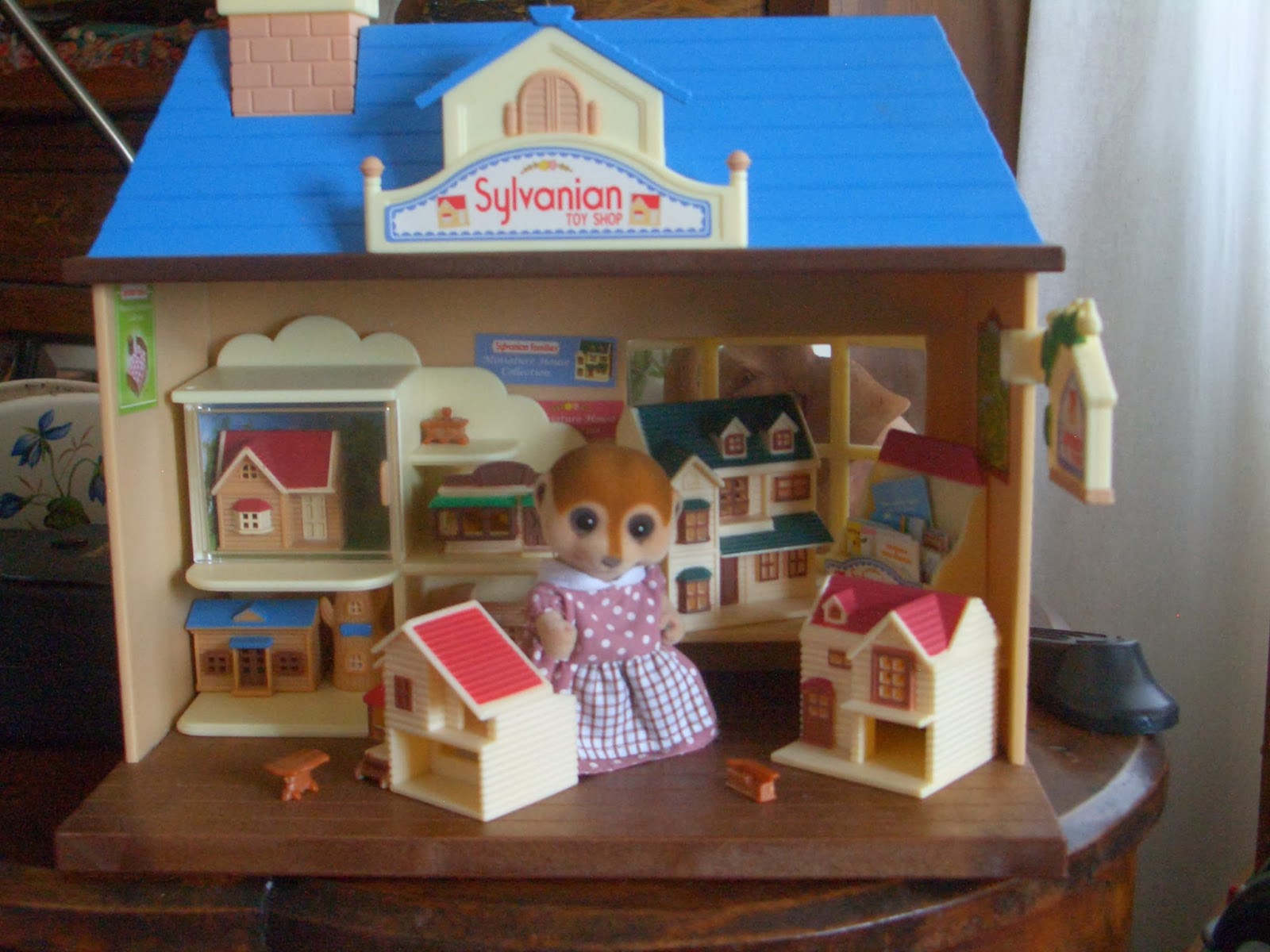 It was pure coincidence, however, that a very different sort of house came along at the same time as this host of animals.   For nearly forty years I have craved one of the Triang Art Deco houses which were made in relatively small numbers in the 1930s. Whenever I located one, on ebay or elsewhere, they were way above my price range.   I had more or less reconciled myself to continuing with my standard patter in Small Worlds;  I show off my group of Triang houses, seen here with some others, 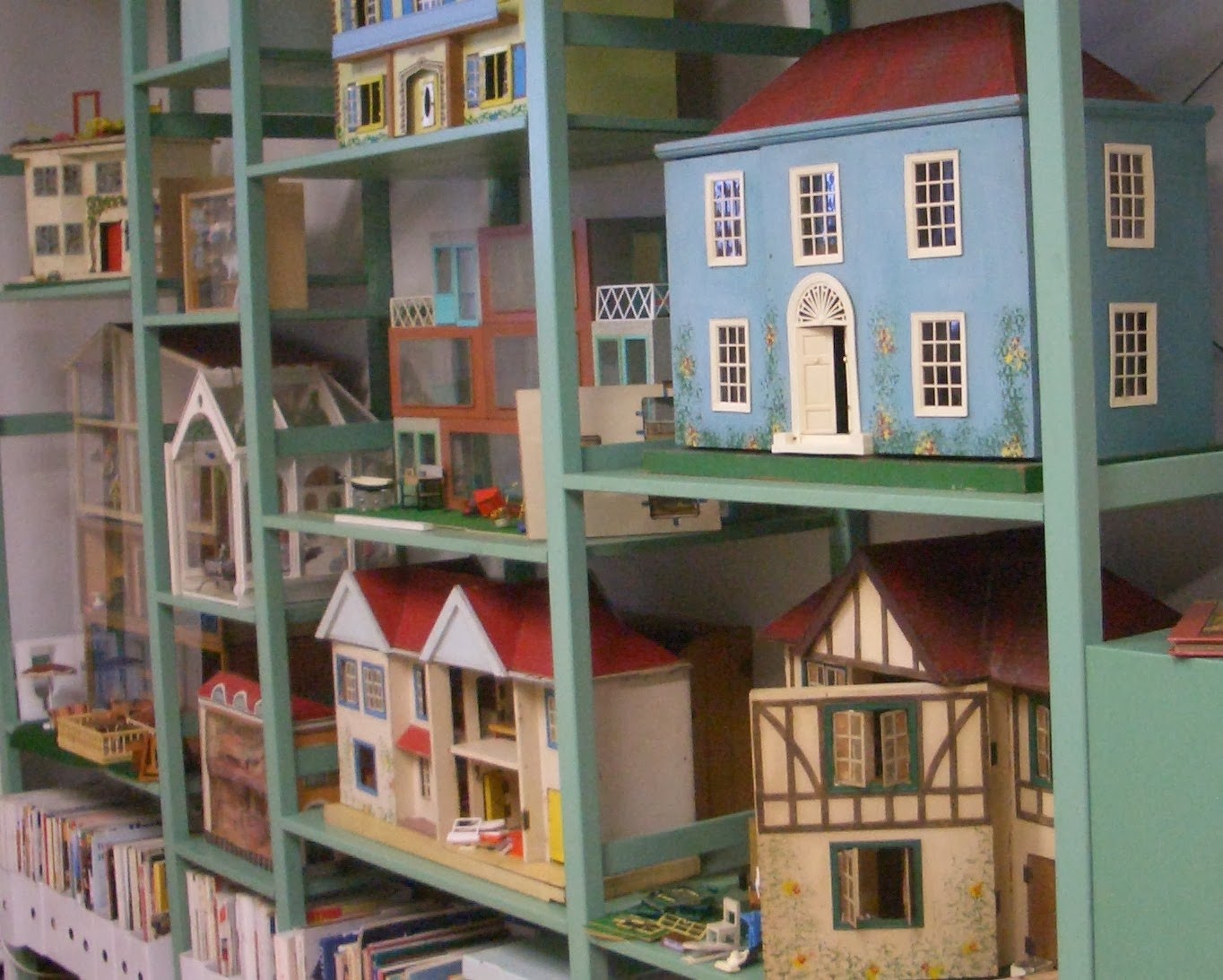 and then open up the replica of a 1930s Triang catalogue, pointing out the Art Deco houses and saying "... I wish I had one of these".

But, wonder of wonders, not long before Christmas one of them turned up on ebay and because it had been renovated rather than restored, it was not really of interest to the purist collectors    And it was collection only, which always reduces the numbers of people interested - remember my Essex Haul?  So I was delighted to get it at a very reasonable price.

My brother kindly arranged to have it picked up from the seller, who lived near to him, and I first saw it "in the flesh" just after Christmas.   To begin with I was so astounded by the quality of the renovation that I thought it was a modern house, built to the same plan as the Triang.   There were a few things about it that didn't seem quite right, although the work was all beautifully done.   But once I had got it home and my daughter and I could examine it properly, it was clear that it was an original, but substantially made over, in particular inside.   It came complete with furniture. 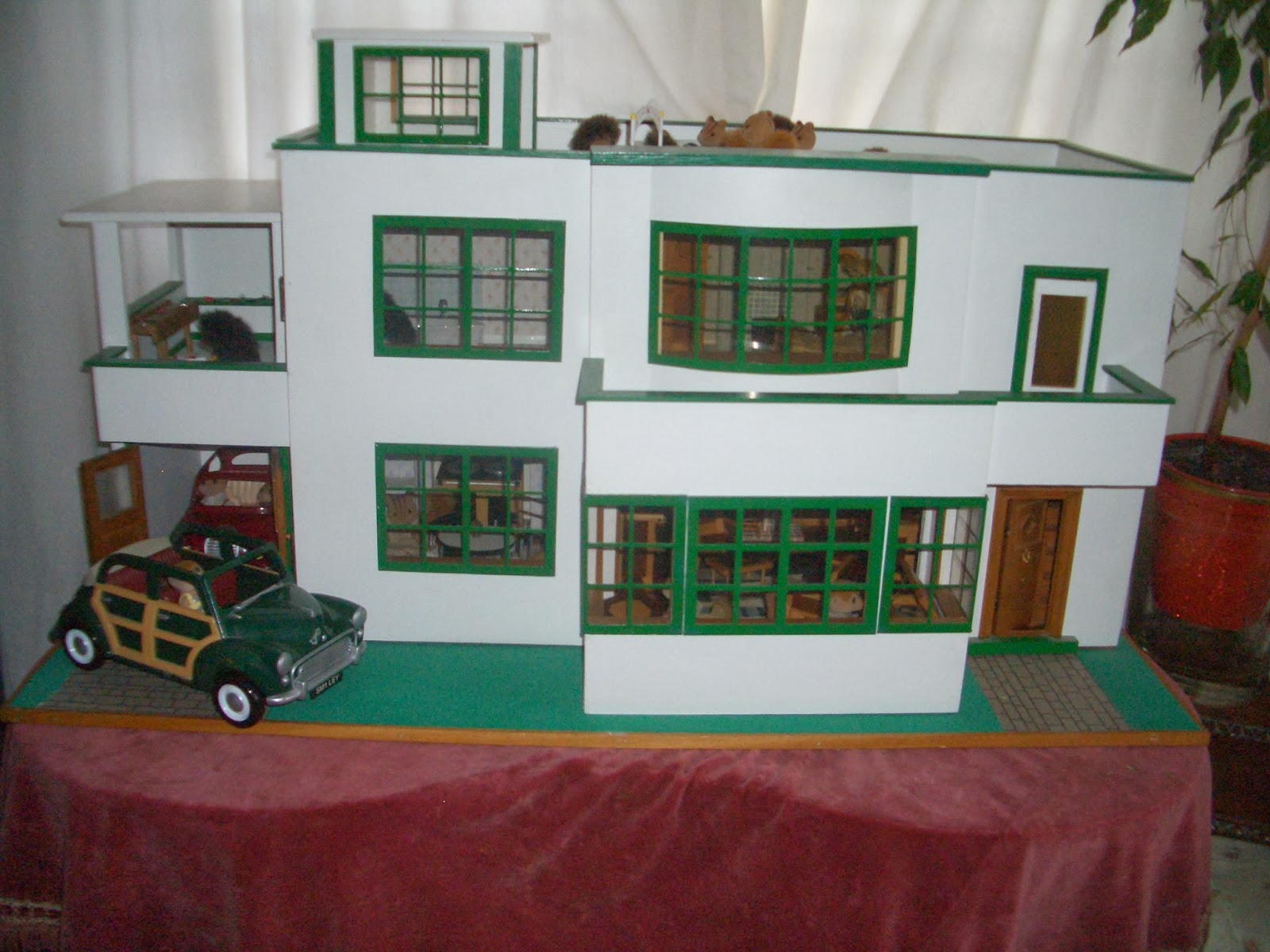 I wanted to find out a bit more about the house and contacted the seller, expressing my delight in it.   He replied:

"Glad you are pleased with the dolls house. It was my wife's in the early 1950's and then was relegated to various attics and finally our damp garage where it remained for the next 20 years or so. Originally it was painted cream but with the years it suffered from neglect. A very dear friend of mine enjoyed model making etc as a relaxation and was very clever at coping with small items. He happened to see the battered dolls house and asked to take it away to refurb. He made all the small pieces of furniture and the individual parquet flooring and generally upgraded the house to its present colours and standard. He started putting in lighting but decided that it was something I should do (which I never did of course). Unfortunately he is not with us anymore but you now have the product of his fine skills. We have 2 granddaughters who, although they have played with the house and furnishings on visits, probably found their electronic toys much more exciting than a wooden old dolls house. As their parents did not wish to take over the house it went on ebay hoping to find someone to give it some tlc. There are several existing art deco sun houses in this area and I believe they were inspired by a Daily Mail Home exhibition modern movement in the mid 1930's. There is one fairly close to us painted white with green windows and this may have prompted my friend to copy the colour scheme".


Since I am not a purist collector, and in any case have enough houses that still need substantial restoration, I am greatly relieved that any work that needs to be done on this one can wait indefinitely.   I've always said that working with dolls houses and miniatures is a 'one day hobby', as in "One day I shall make the Shakespearian theatre, create an Edwardian Department Store, make an Olde Englishe Pub....".

So one day I shall redo the bathroom in this Art Deco house, and possibly remove the green painted balustrade round the roof and balcony which is not part of the original Triang, but not for the moment.

The second thing that struck me was the sheer size of it.   I had thought it was going to be the same scale as my other Triangs, about 1/16th, but this was clearly much bigger than they were.   Someone on the very useful website Dolls Houses Past and Present  was able to enlighten me and I now know Triang made these houses in two sizes.   Quite how we are going to get it into Small Worlds I don't know! 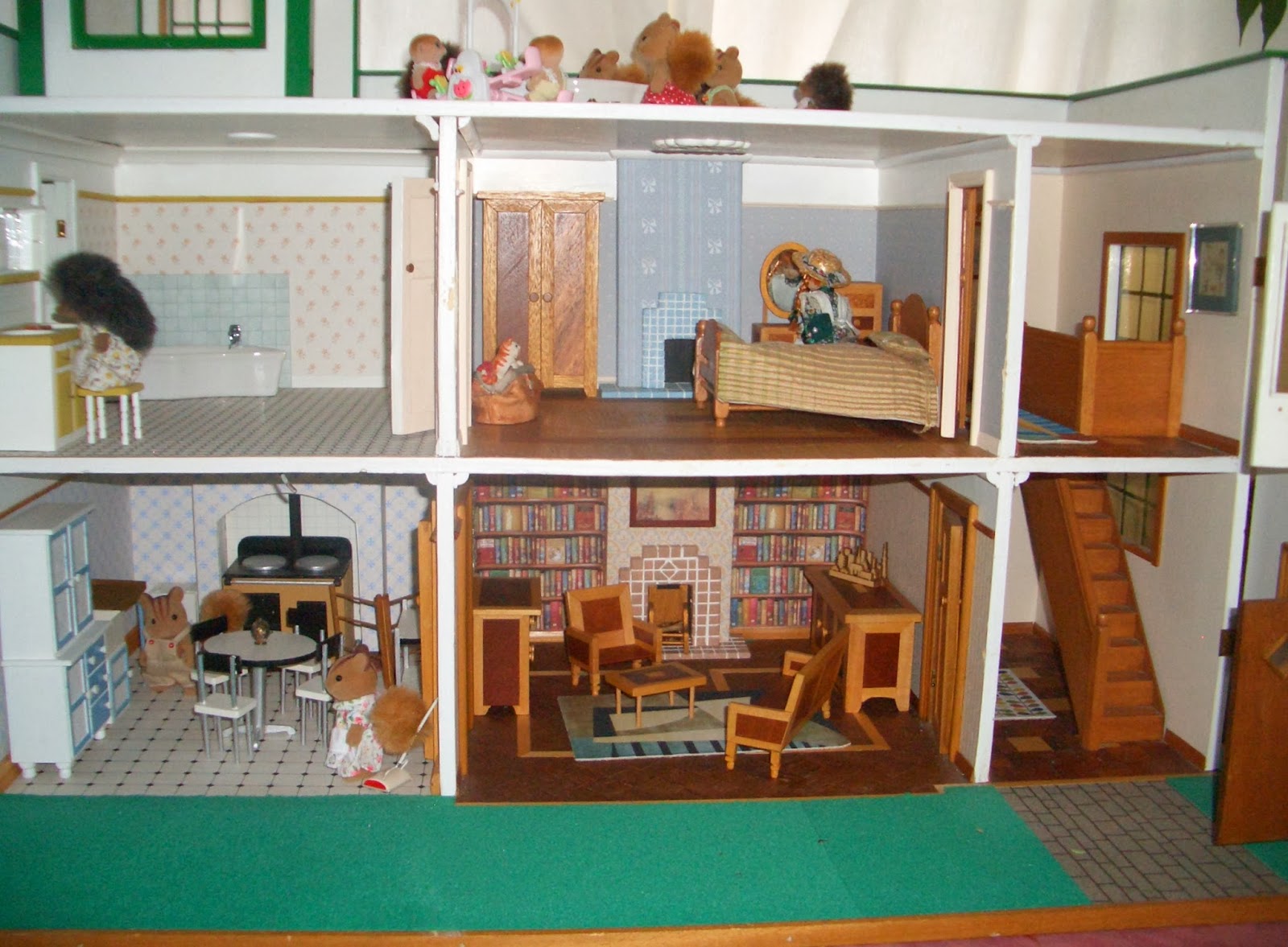 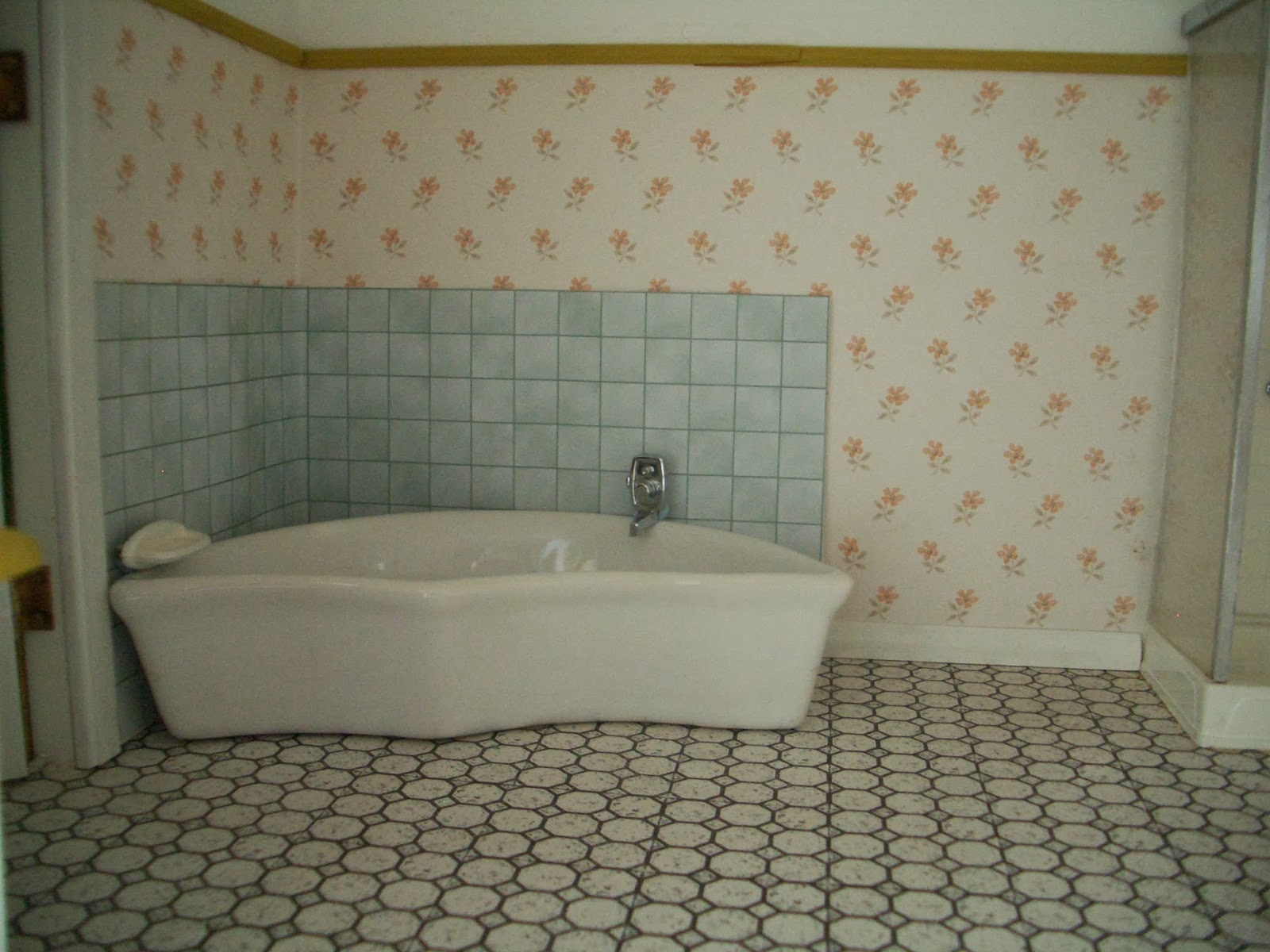 We have actually started on the bathroom - I pulled out the tiny bath that was there and replaced it with a charity shop find - one of a set of dishes for serving dips. 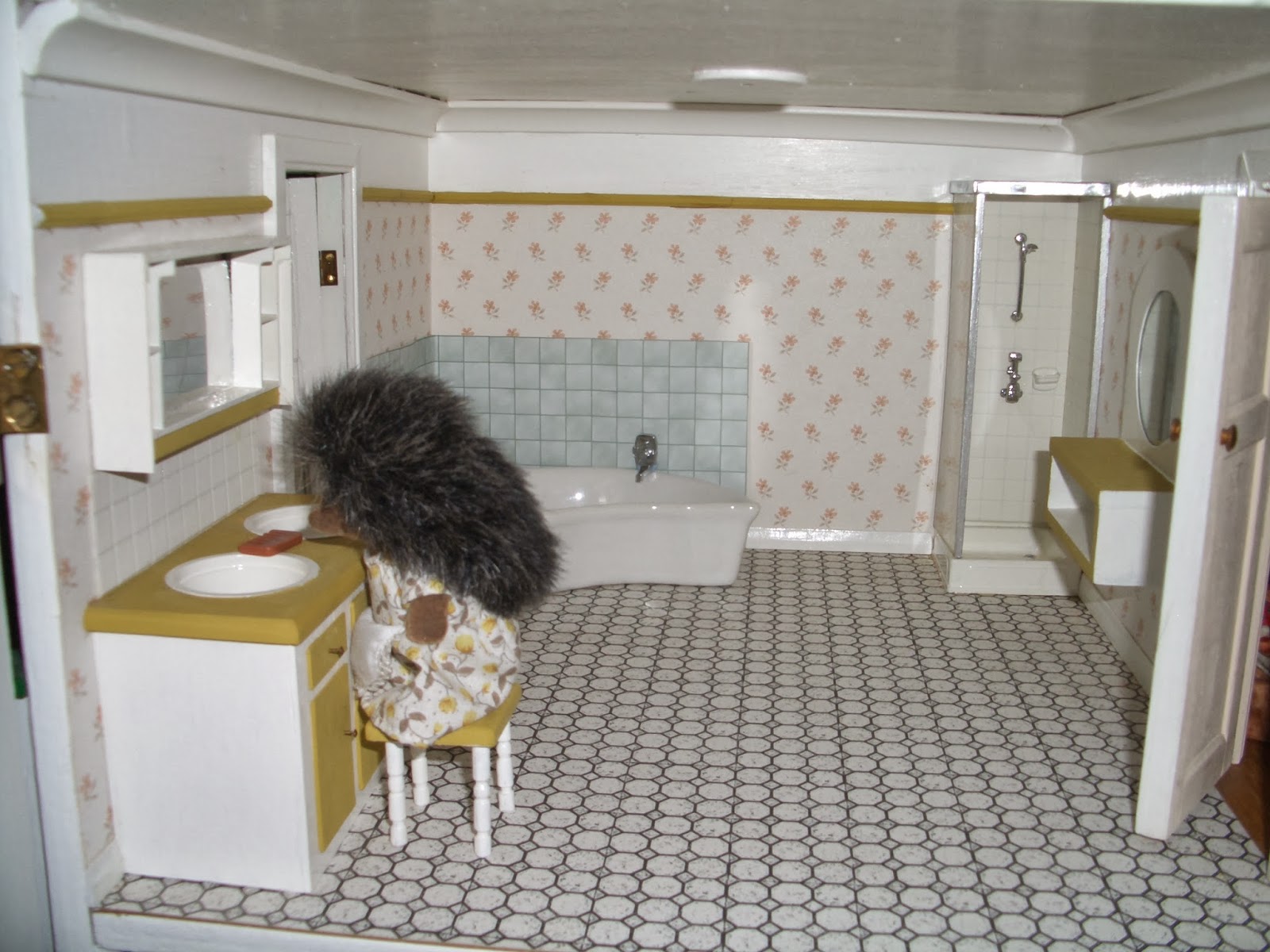 But the whole room will eventually need to be redecorated in true Art Deco style - once Mama Hedgehog has finished combing her hair perhaps, which could take a while.


The centre dish of the same dip set is doing sterling duty as a paddling pool on the roof, with yet a third about to become a flower bed up there. 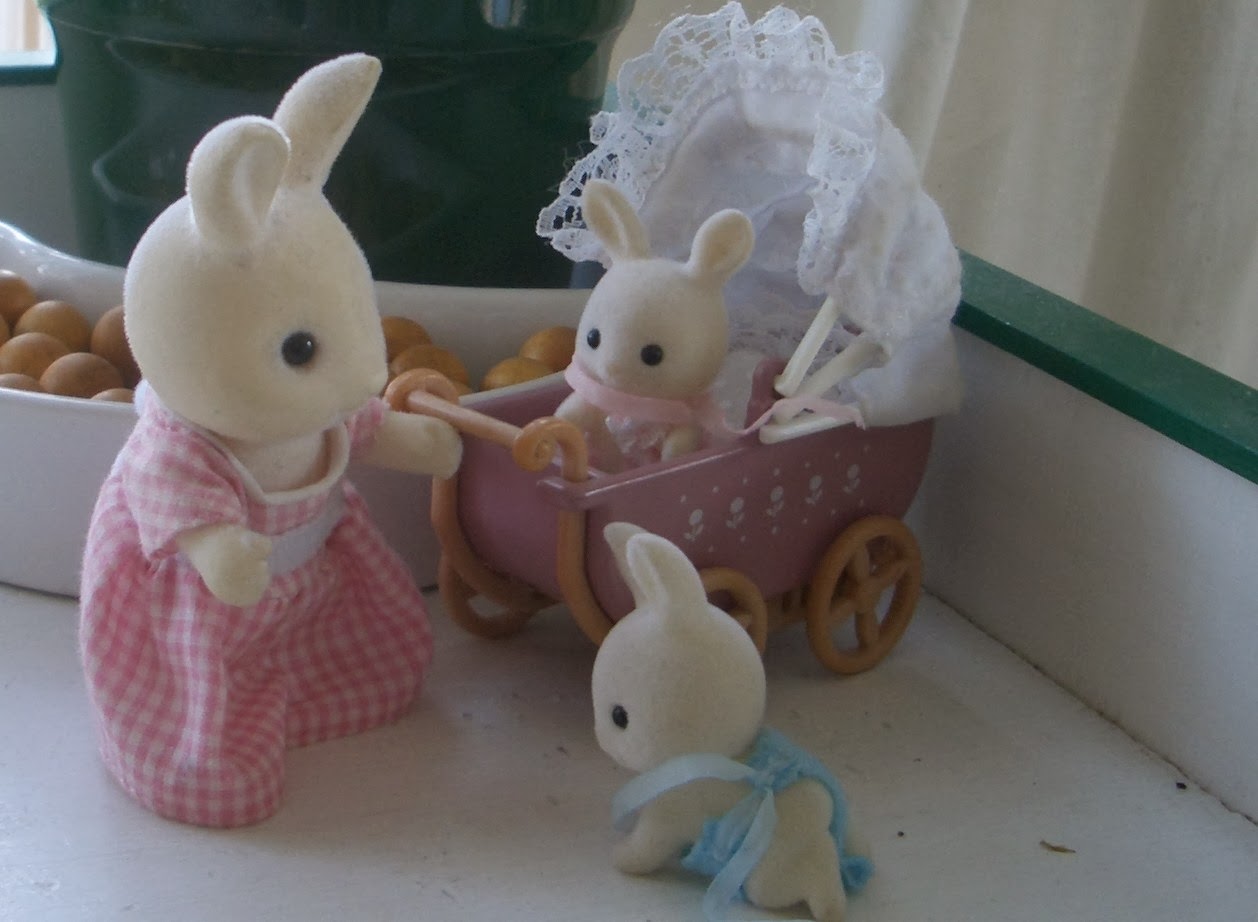 However, wholesale residence by a troupe of animals is not my long-term intention for this house.   When the house moves to Small Worlds in April this year, the families will remain in England and move into their much more modest accommodation (though I am still trying to source a reasonably priced Sylvanian caravan to reduce the pressure of over-crowding when that happens).

I should like the Triang to be peopled with elegant souls from the 1930s.   In particular, I am on the lookout for some bathing beauties to grace what will eventually be a much larger pool on the roof. Something along the lines of the swimming terrace at the prewar Barrandov Film Studios in Prague perhaps - or a pool like this one, but up on the roof.

I currently have bathing beauties on an ebay search but so far nothing just right - or affordable - has surfaced. 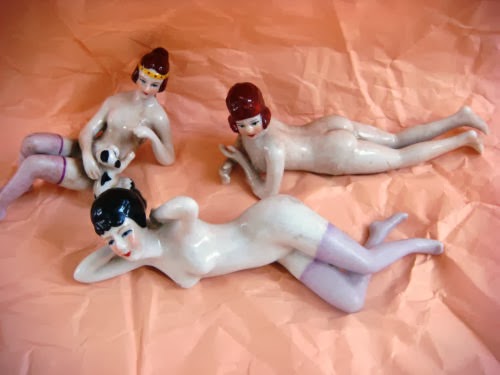 Nothing quite as risqué as these perhaps.......

Though I fear this young lady is a little too demure... 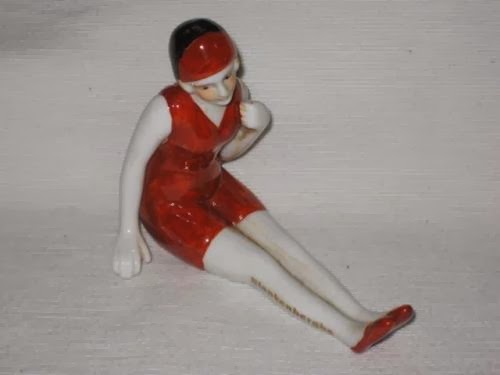 I will now round off this picture heavy post with some more scenes of Sylvanians settled happily in their very stylish home, blissfully unaware of what awaits them in the near future. 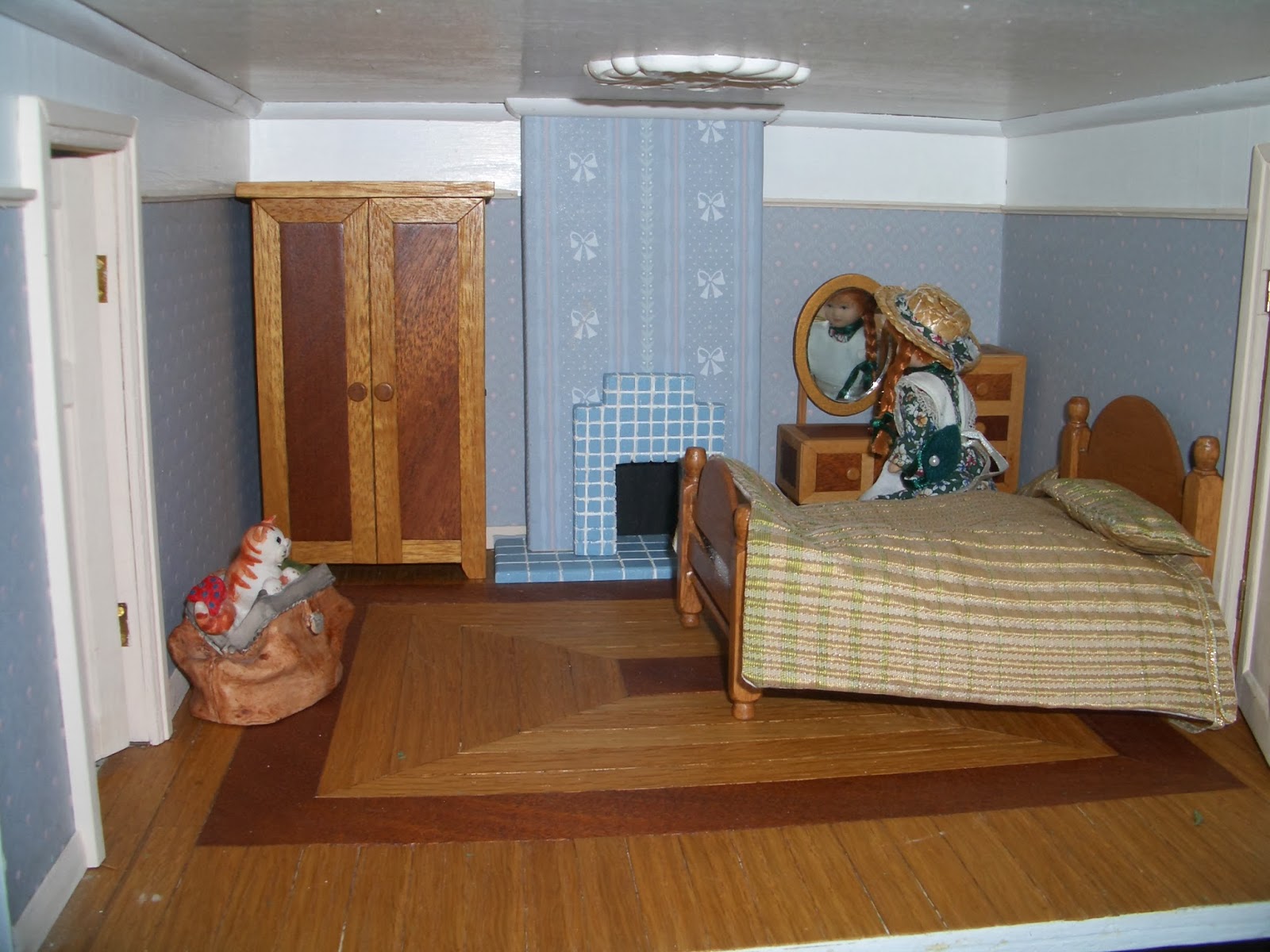 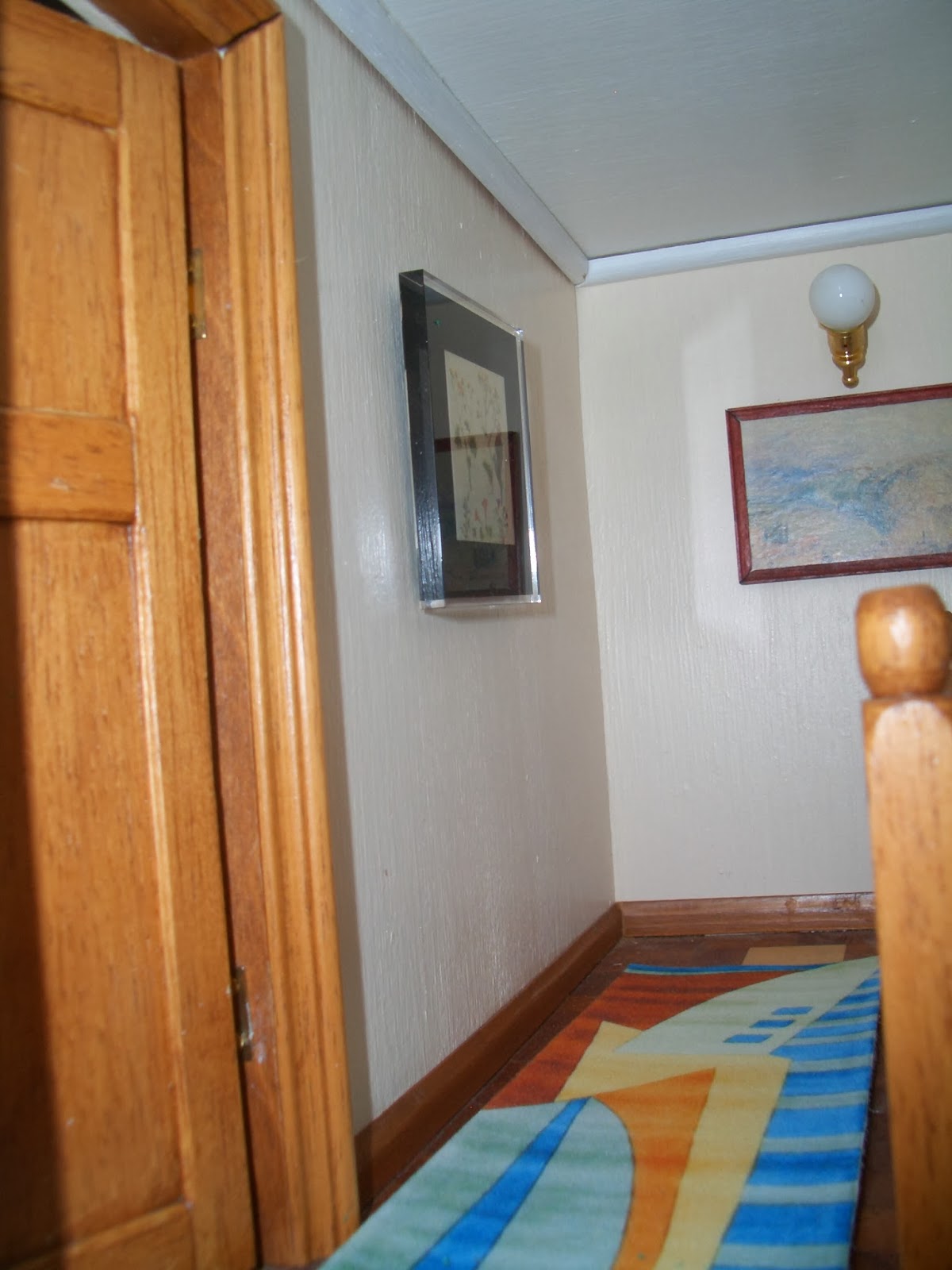 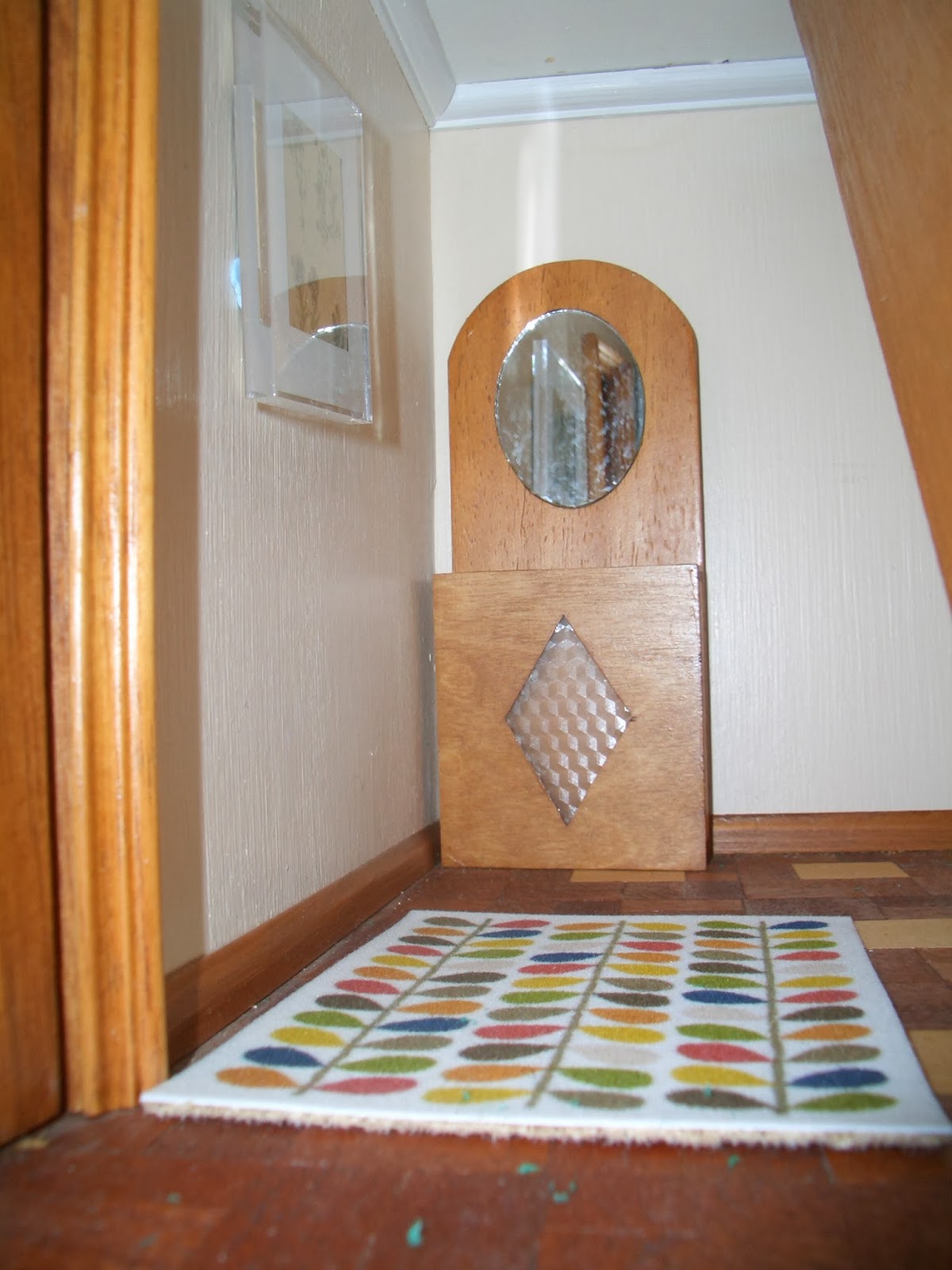 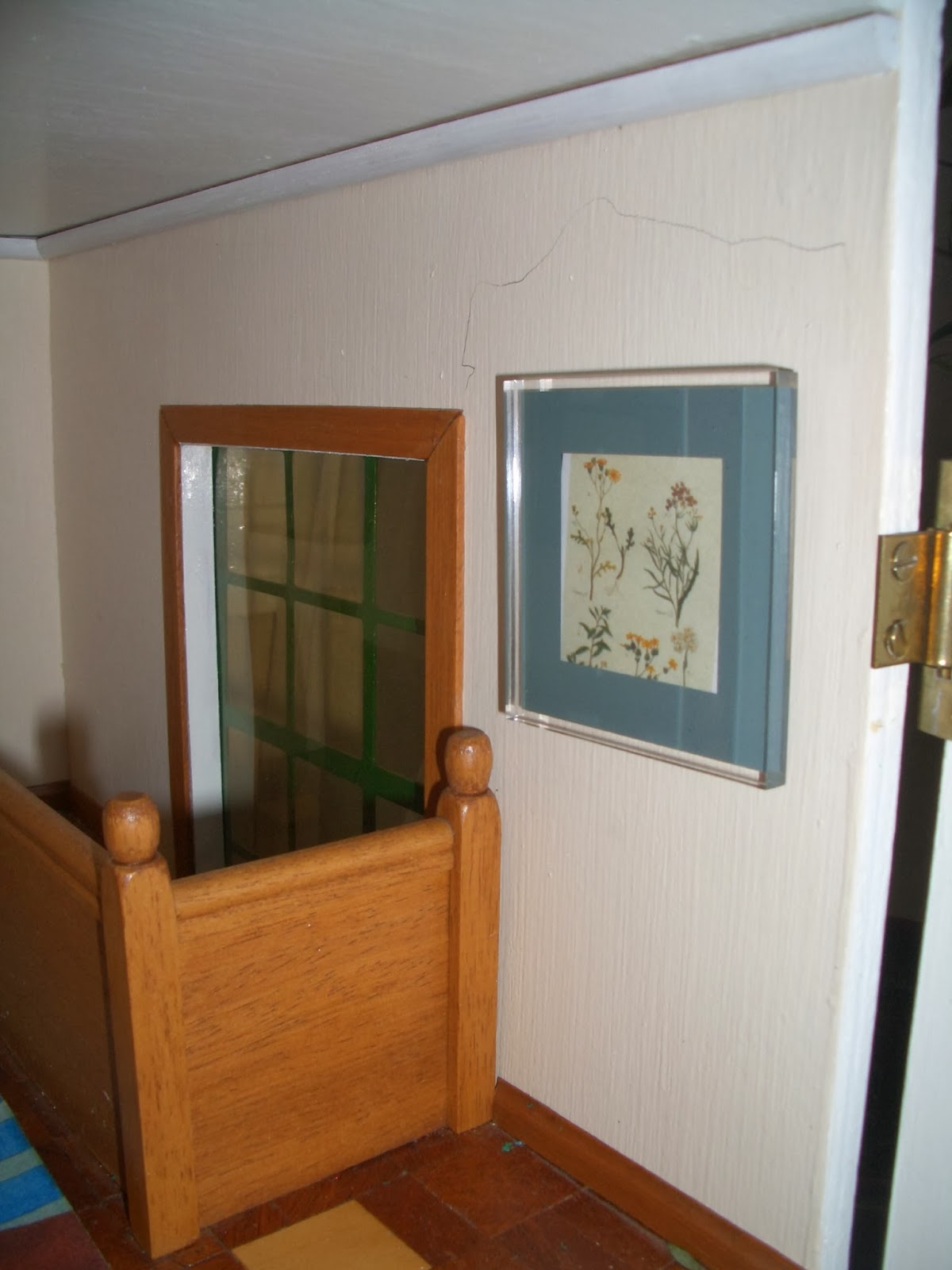 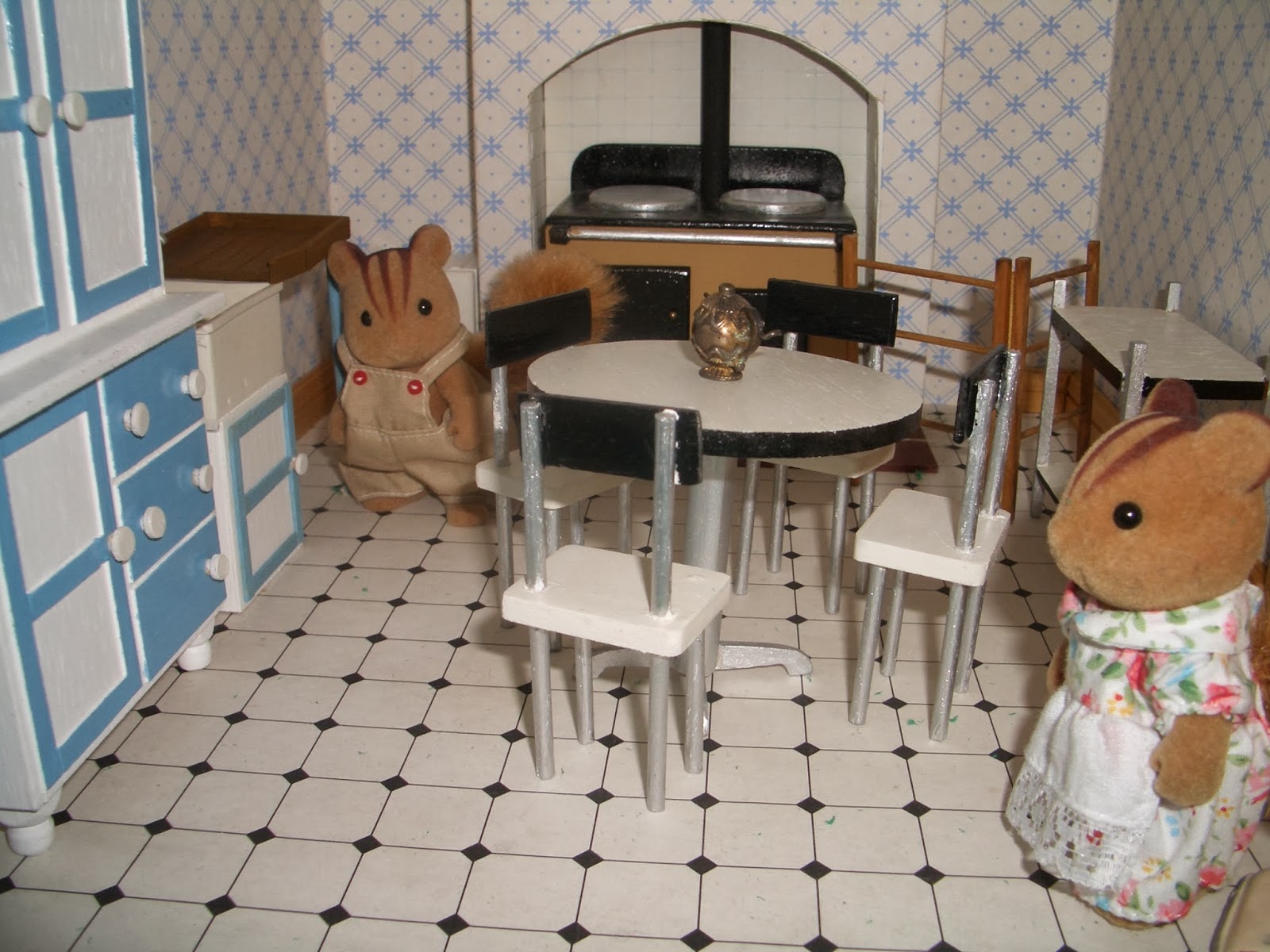 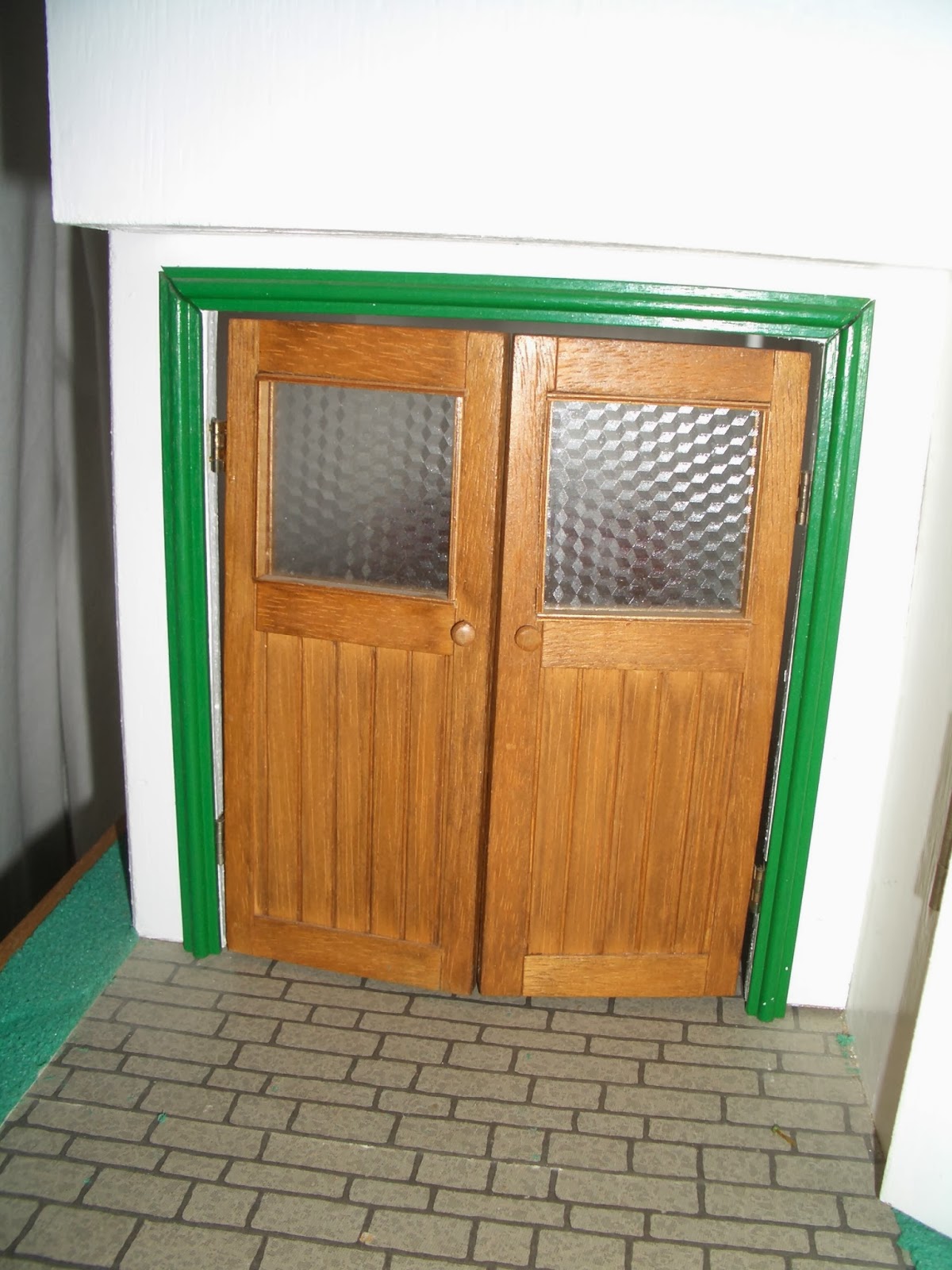 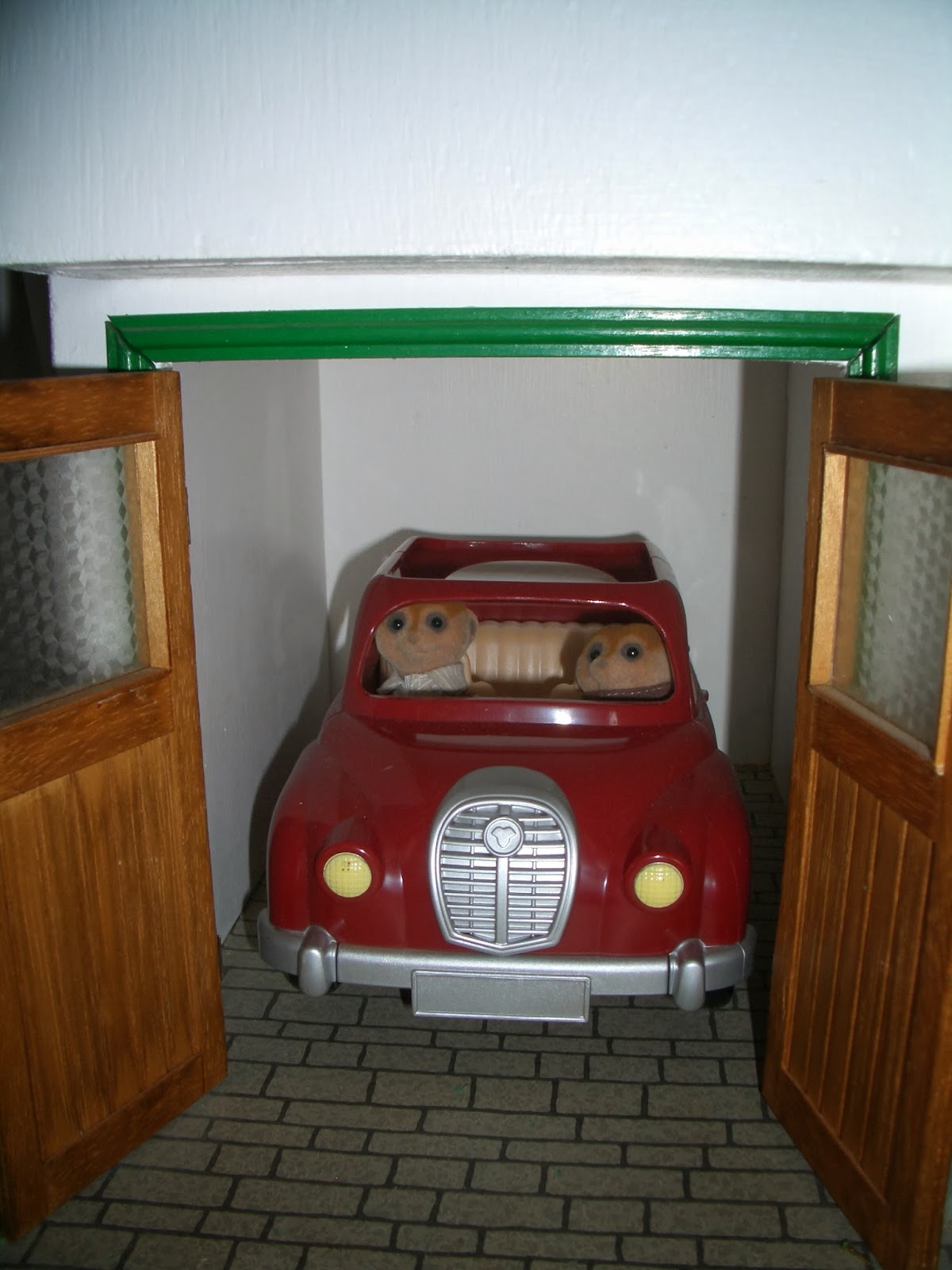 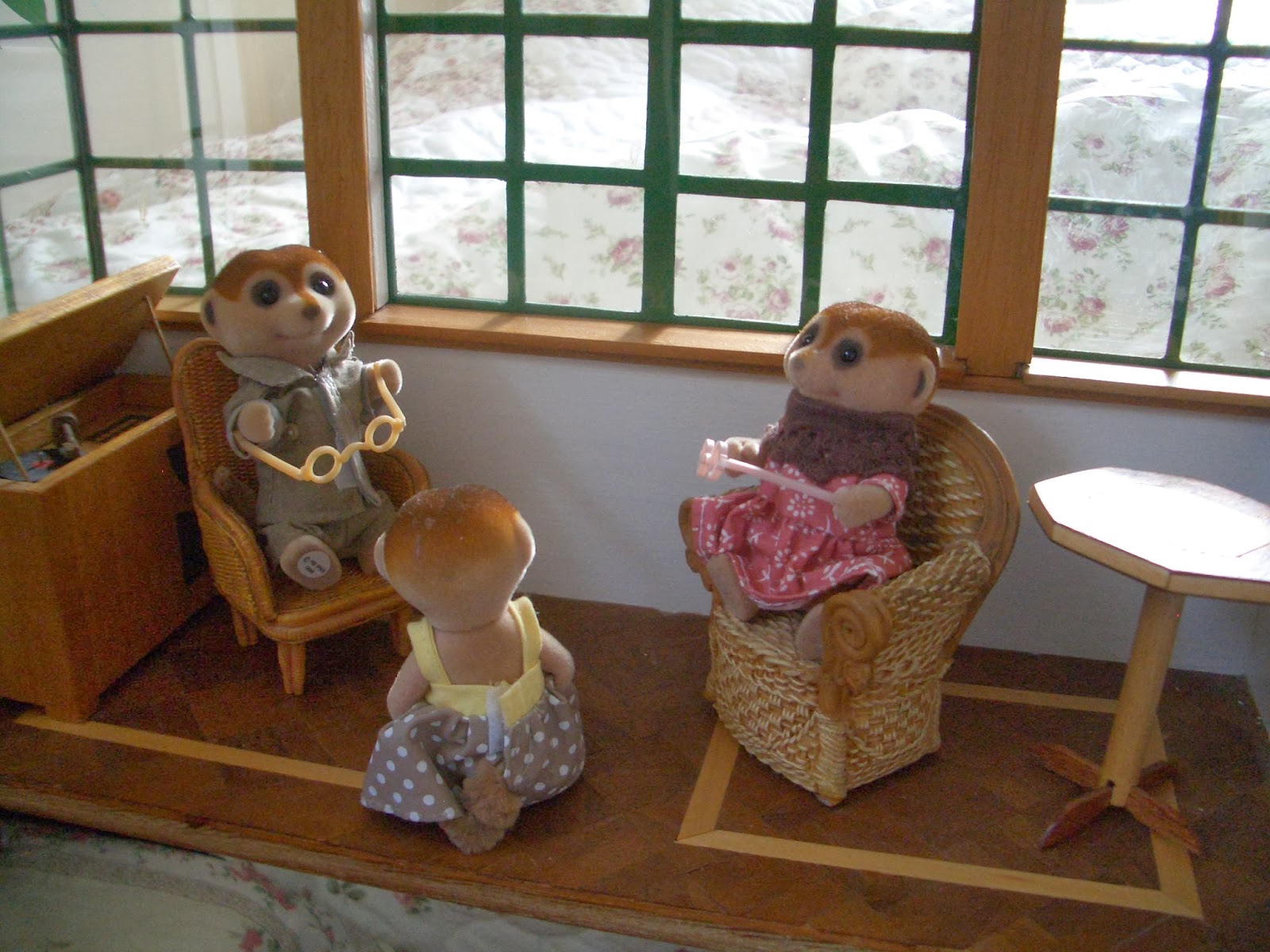 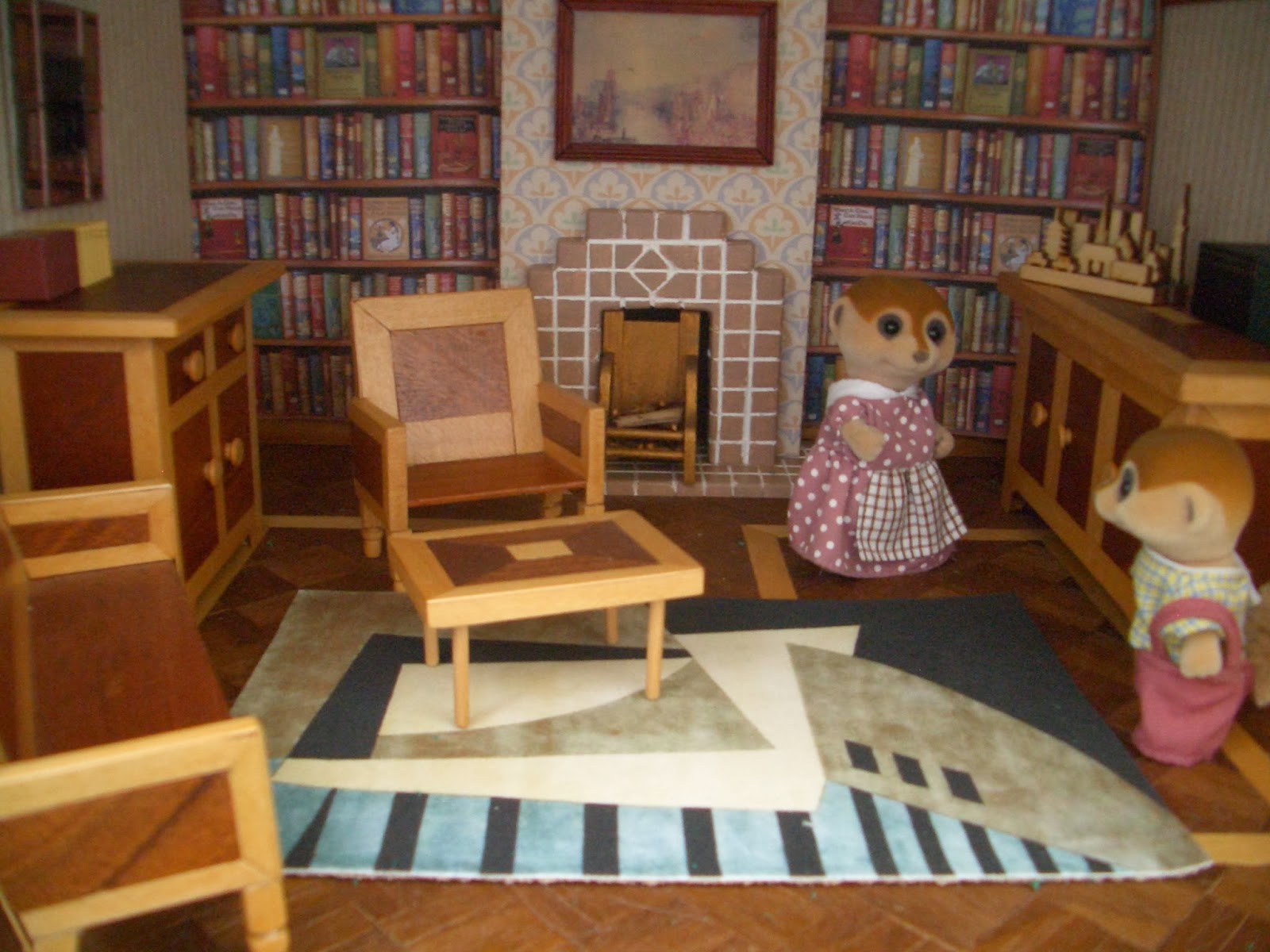 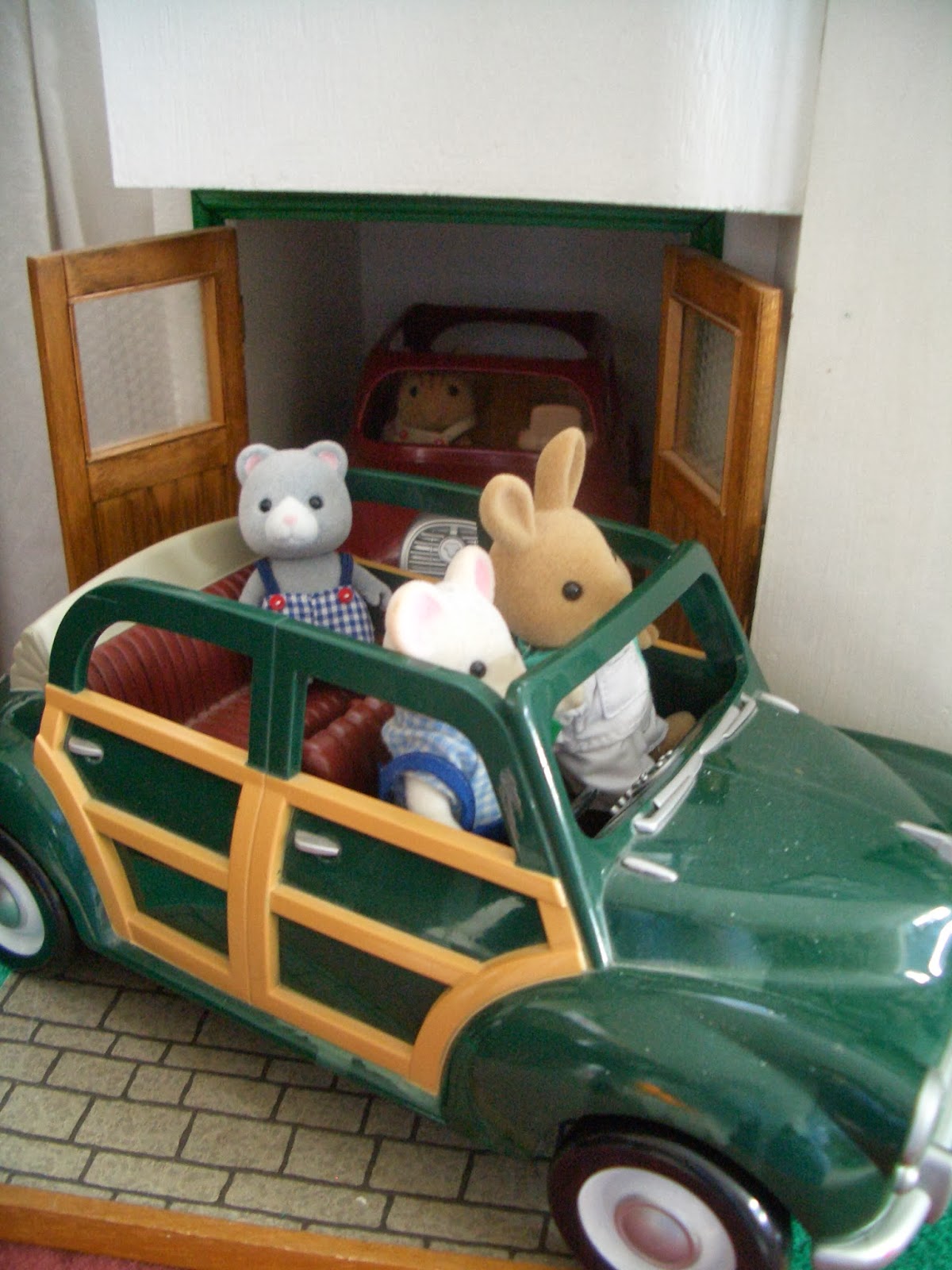 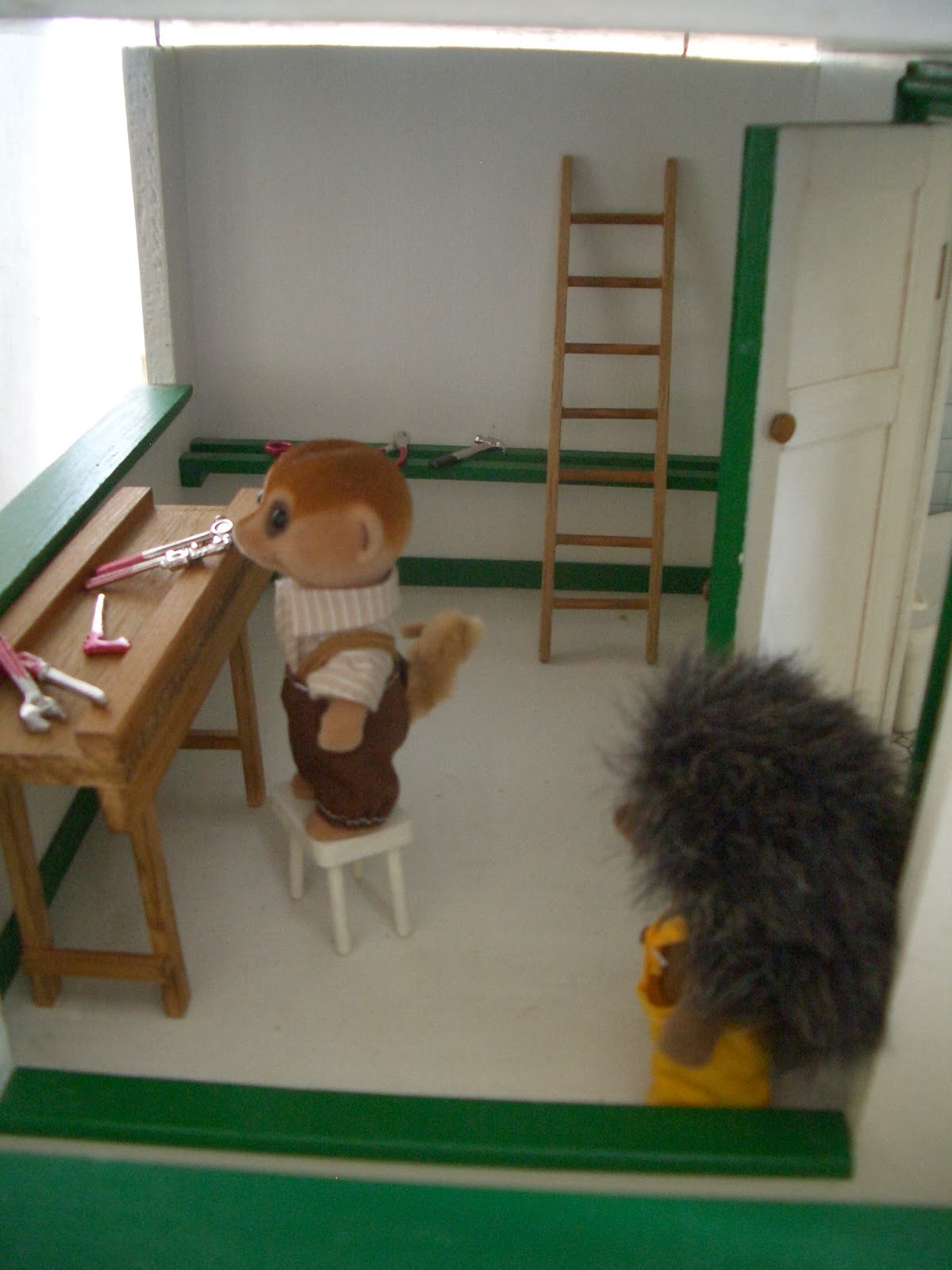 The sharper eyed amongst you will have spotted a stranger in the bedroom - Anne of Green Gables has managed to sneak in for a quick peek in the mirror.   And blog readers from the Chalet School Bulletin Board should note that I have kept my promise to reveal one of Tom's houses, complete with car(s) and library.....(Apologies to other readers - an in-joke.)

The modern picture frames on the landing are from a set of three called KVEK from our favourite Swedish furniture store - they even serve the mini-world!

And last but not least, older British readers will probably have identified the source of the title of this blogpost - but for old times sake here is a link to what was a cult programme in its time - the less said the better about the modern remake.

Thank you for following me once again.   I hope to post before we set off for Small Worlds at Easter - it seems quite a way off, but I know that the time will whizz past so I make no promises.

In fact, perhaps I should wish you all a very Happy Easter, just in case!