For my two grandchildren...

This post is sheer self-indulgence.   I was trying to gear myself up to write the next short article for the magazine "Dolls House and Miniature Scene" and thought it would be easier to get into writing mode via my own blog.   But as followers will know, I already signed off with Easter wishes in my last post, because I thought I would not have time or subject matter for another before getting back to Small Worlds after Easter.

So what to write about?  It seems that the little families in the last post appealed to quite a number of readers.   What better than to continue their story whilst they are still spread out on my current bedroom floor?

The story however really starts in another place and, as all good tales should, it begins with "Once upon a time....."

Once upon a time, in our former house, that is the full-size one we moved out of last October, my grandchildren had the privilege and pleasure of a whole room to themselves, known as The Town Room.   "Why that?" I hear you ask?   Well, for the best of reasons - it was a room with a whole town layout, a Playmobil (in our family more usually known as Playpeople) town.   Even though my own children had owned a large collection of early Playpeople - Cowboys and Indians, circus folk, a small hospital, knights in armour - when my granddaughter, at the age of four or so, kept explaining she would like "a town", it took us a while to work out that it was Playpeople she meant.

All the fault of a visit to friends in Germany about a year earlier, who had produced some of the lovely half-timbered houses - not quite as stunning as this customised one - and she had remembered them well enough to know that she too would like "a town".

As you may imagine, I can never resist a collecting challenge.   So over a period of a few months, which then morphed into years,  I carefully searched ebay, particularly in Germany, for suitable candidates for the town.   It wasn't long before there was enough for a town big enough to delight anyone, let alone a small child.

And we were fortunate to have a spare "spareroom" to house it and all its wonders.


A particular delight was the hospital - much larger than the one my children had owned, and complete with an intensive care unit, a clown to entertain the children's ward and a very unpleasant receptionist...... 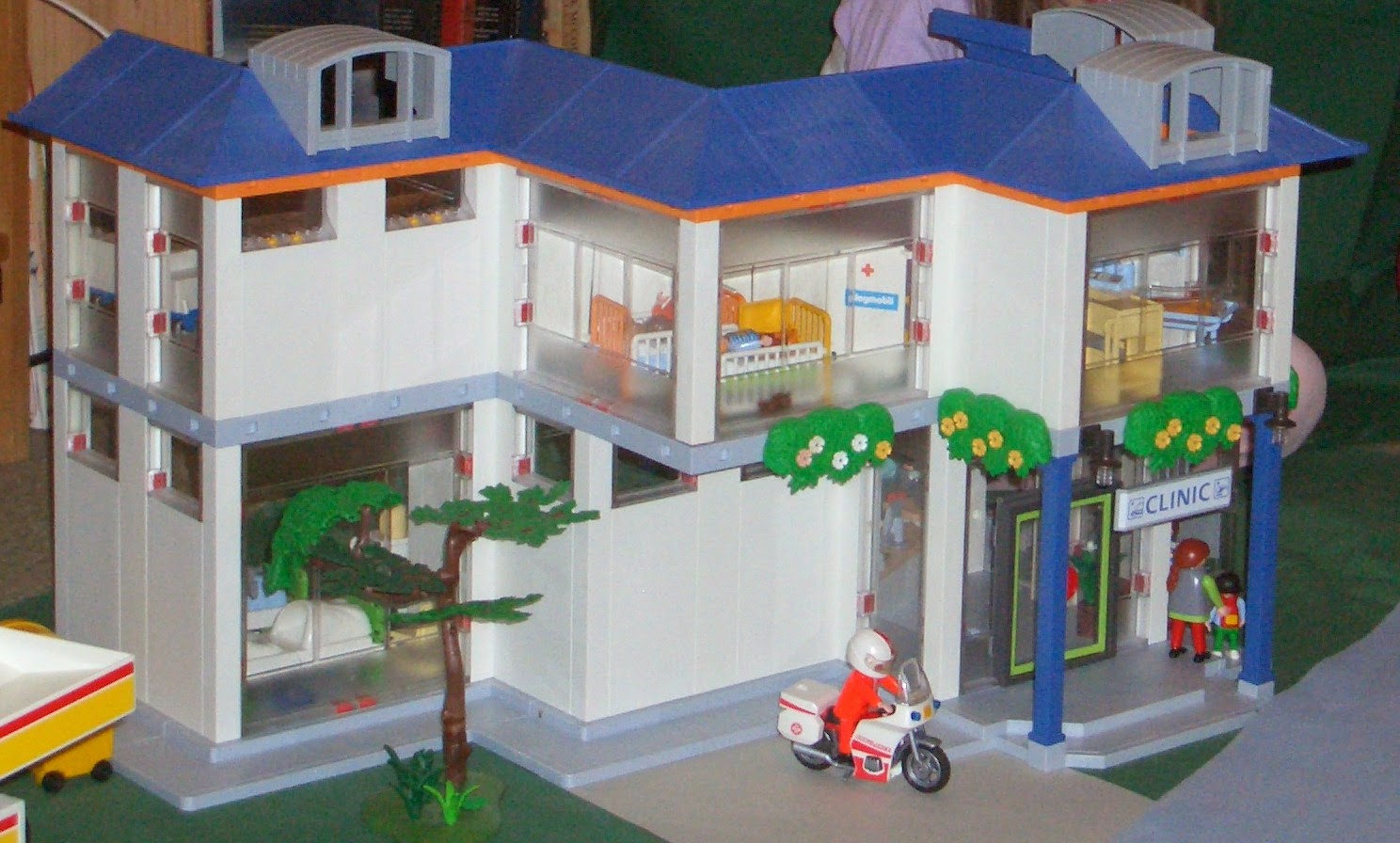 The splendid fire station boasts one of the few artefacts allowed into this modern town by Butterfly, who fiercely guards the Playpeople of her childhood.   But on the roof you can see the vintage helicopter, faithfully serving the needs of the townspeople.   Given my granddaughter's penchant for perching people up on the highest roofs in her early days in the town, it's just as well there was a rescue helicopter! After some years my grandson too was allowed to join in the play and the town grew rather overcrowded, with a lagoon complete with treasure island and a pirate ship, men at work digging up the road, and a wedding feast around the clocktower on the roundabout. 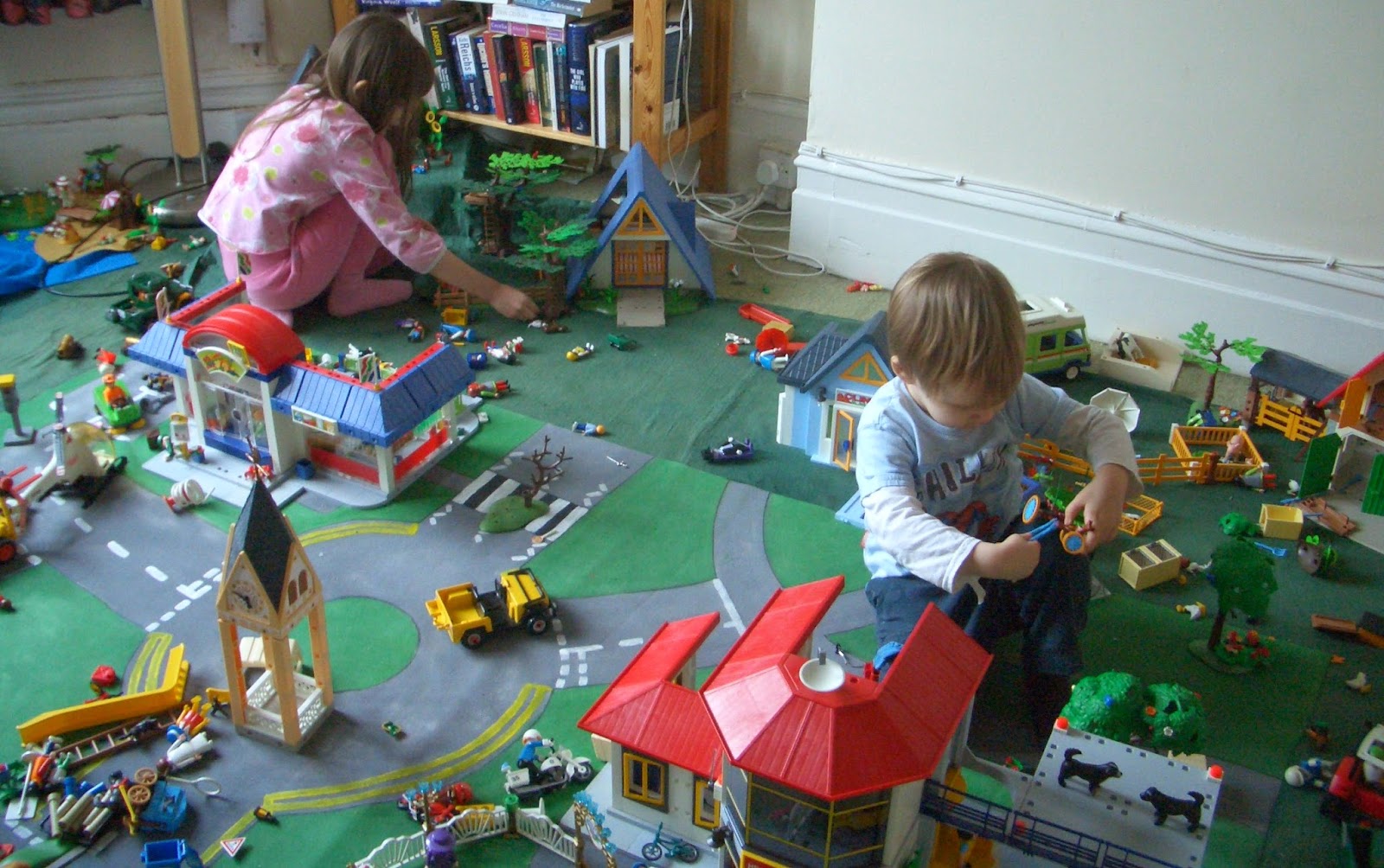 Sadly, once we moved in October, there was no space in our new home for a whole town layout and after many years and countless hours of play, (and much muttering by Butterfly to whom it fell to periodically restore the town to order) it is now resting in ten carefully labelled plastic crates in a corner of our tiny third bedroom, guarded by the pirate ships. 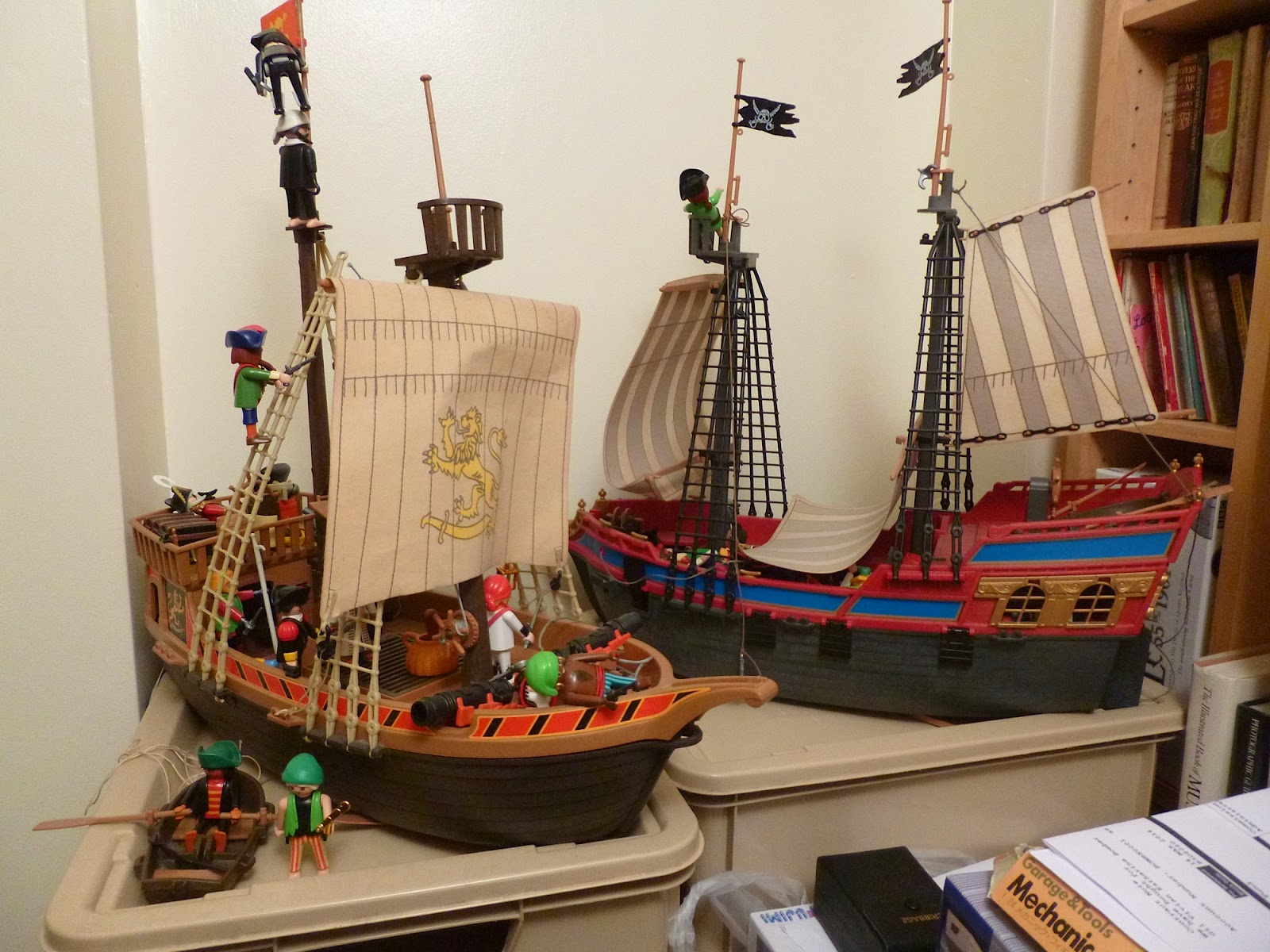 The plan is that parts of it can be set up in my bedroom and then packed away again at the end of a day's play, but so far this hasn't happened - and in the meantime there has been an invasion.   But more of that in the next post.......
I am pleased to say that one element has survived outside the crates and that is the Playmobil Dollshouse that now has pride of place in my granddaughter's bedroom - it always stood on a table at the edge of the town since, despite everything being made to the same scale, it rather dwarfed the rest of the buildings.   Although it is made of plastic, everything is so carefully thought out that it has always pleased me greatly. 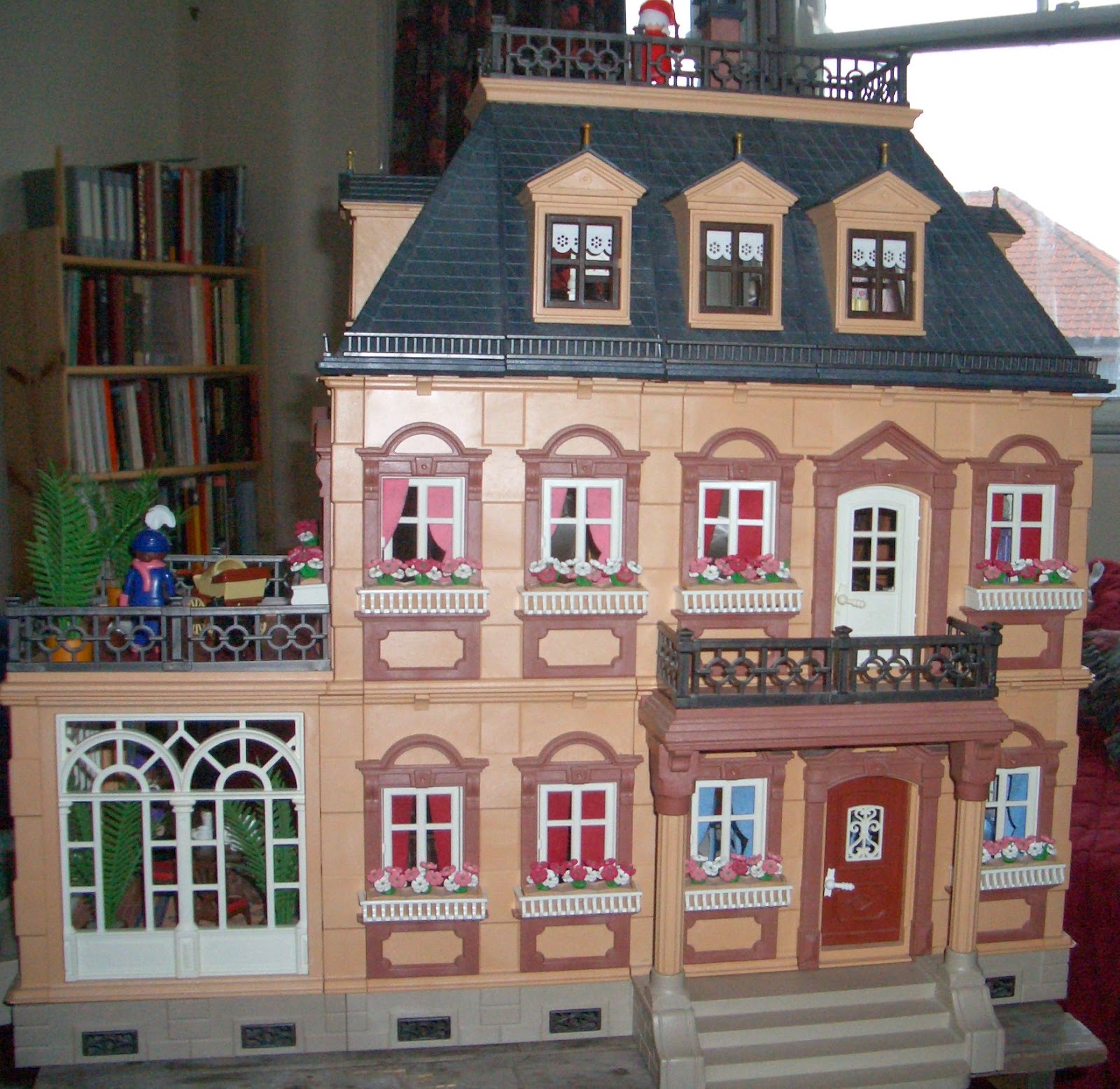 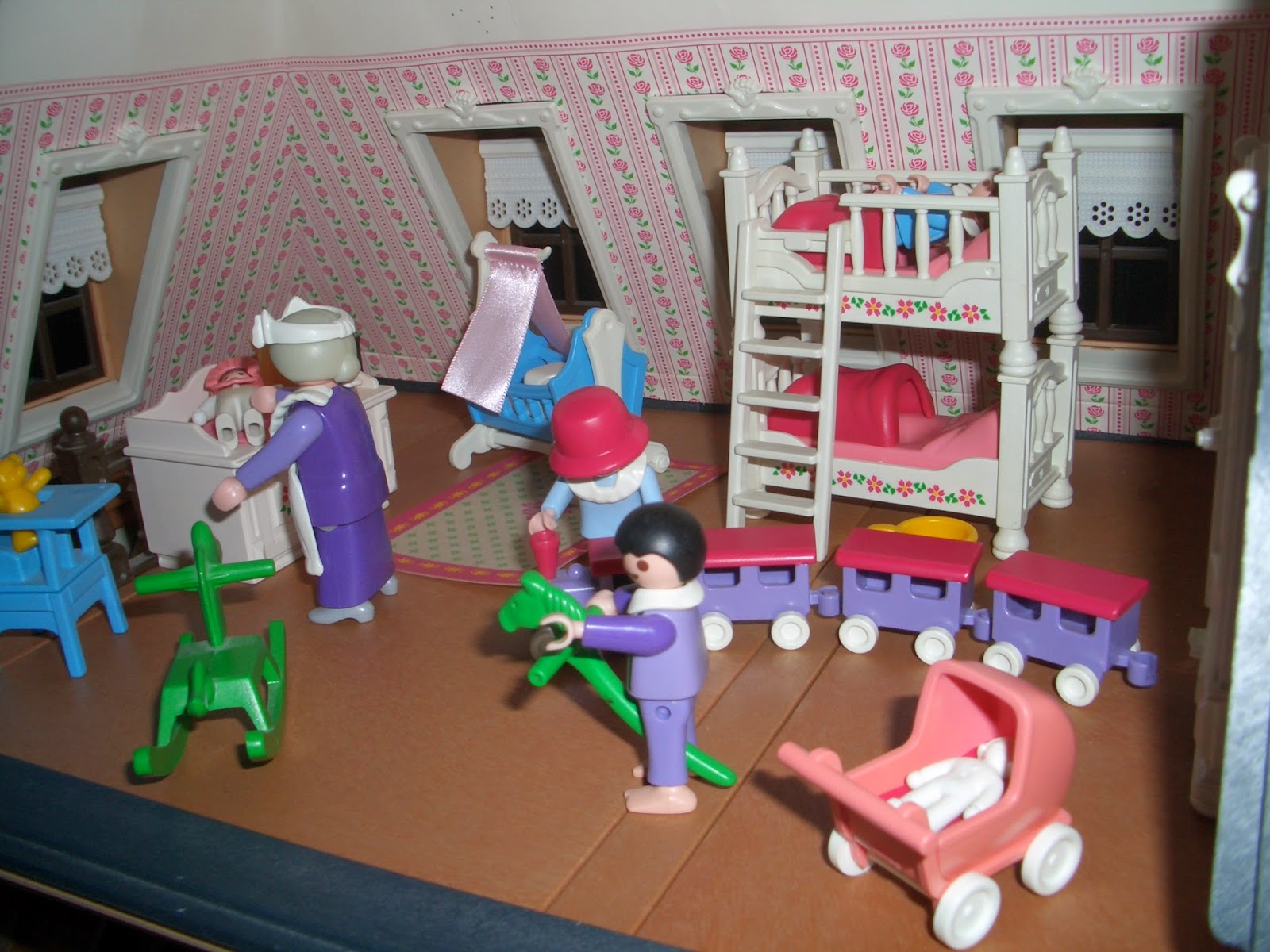 Peace reigns in the nursery under Nanny's benevolent eye... 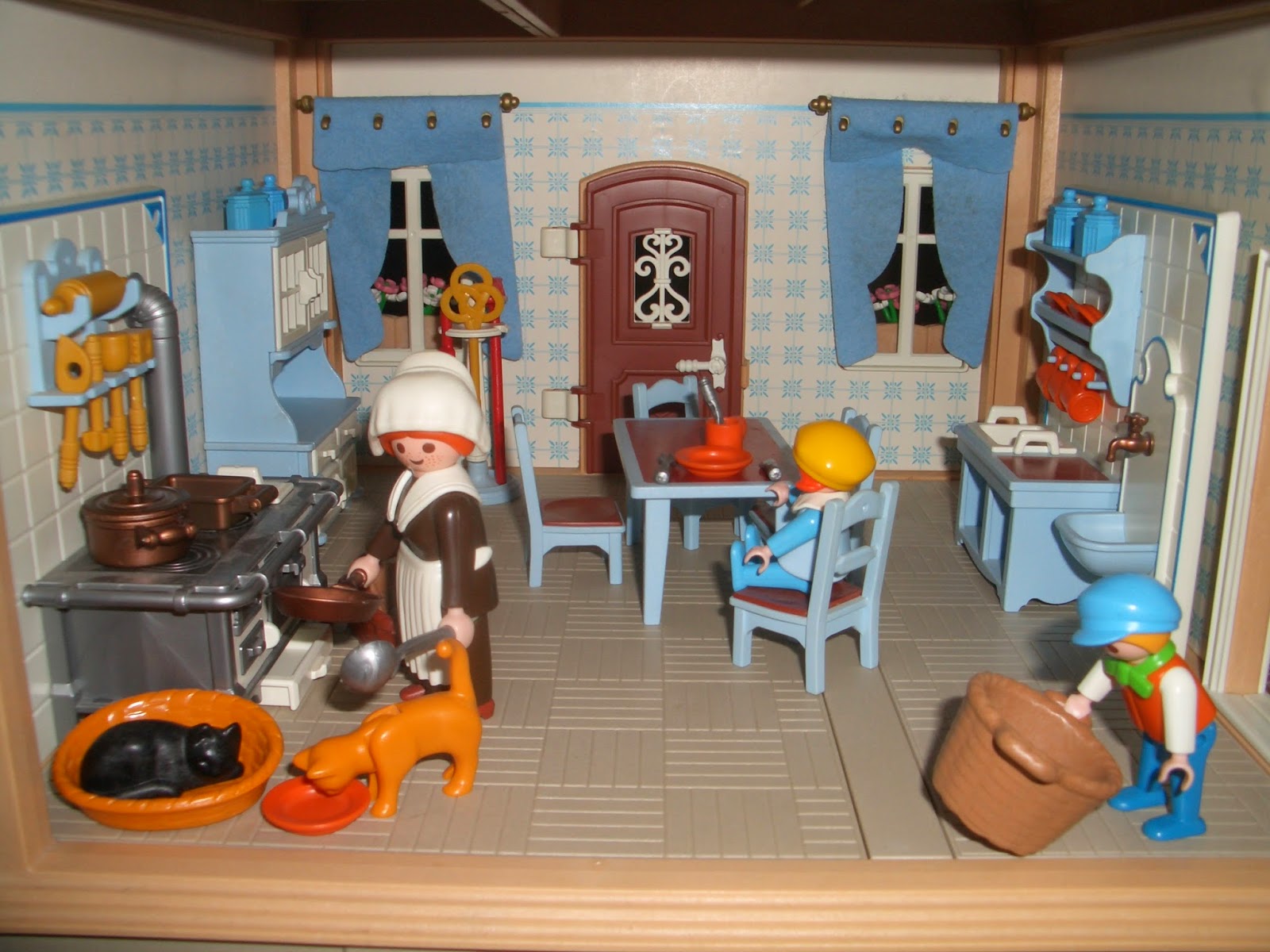 Even the animals are catered for in Cook's well-run kitchen... 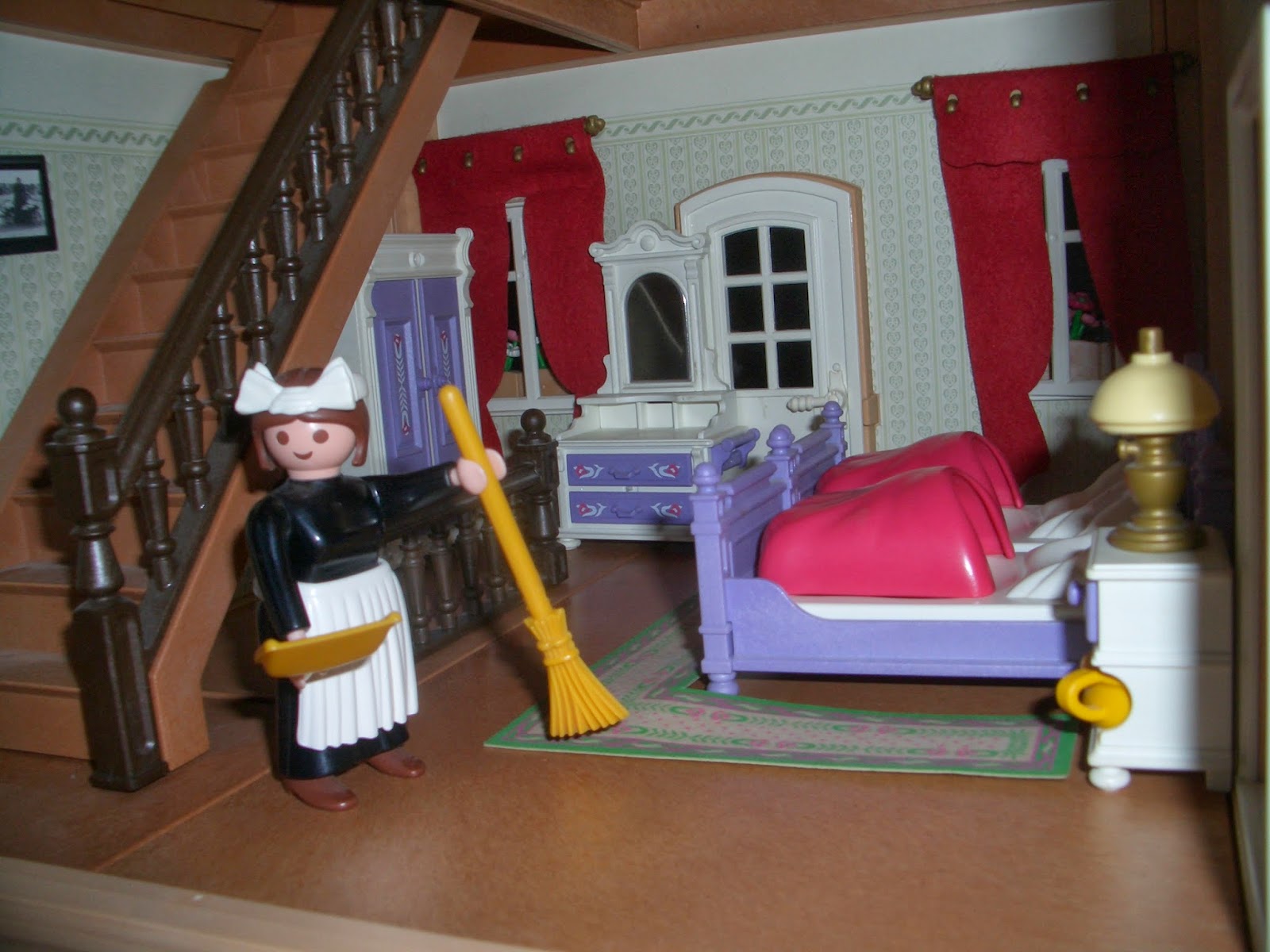 A happy maid is a hard-working maid.... 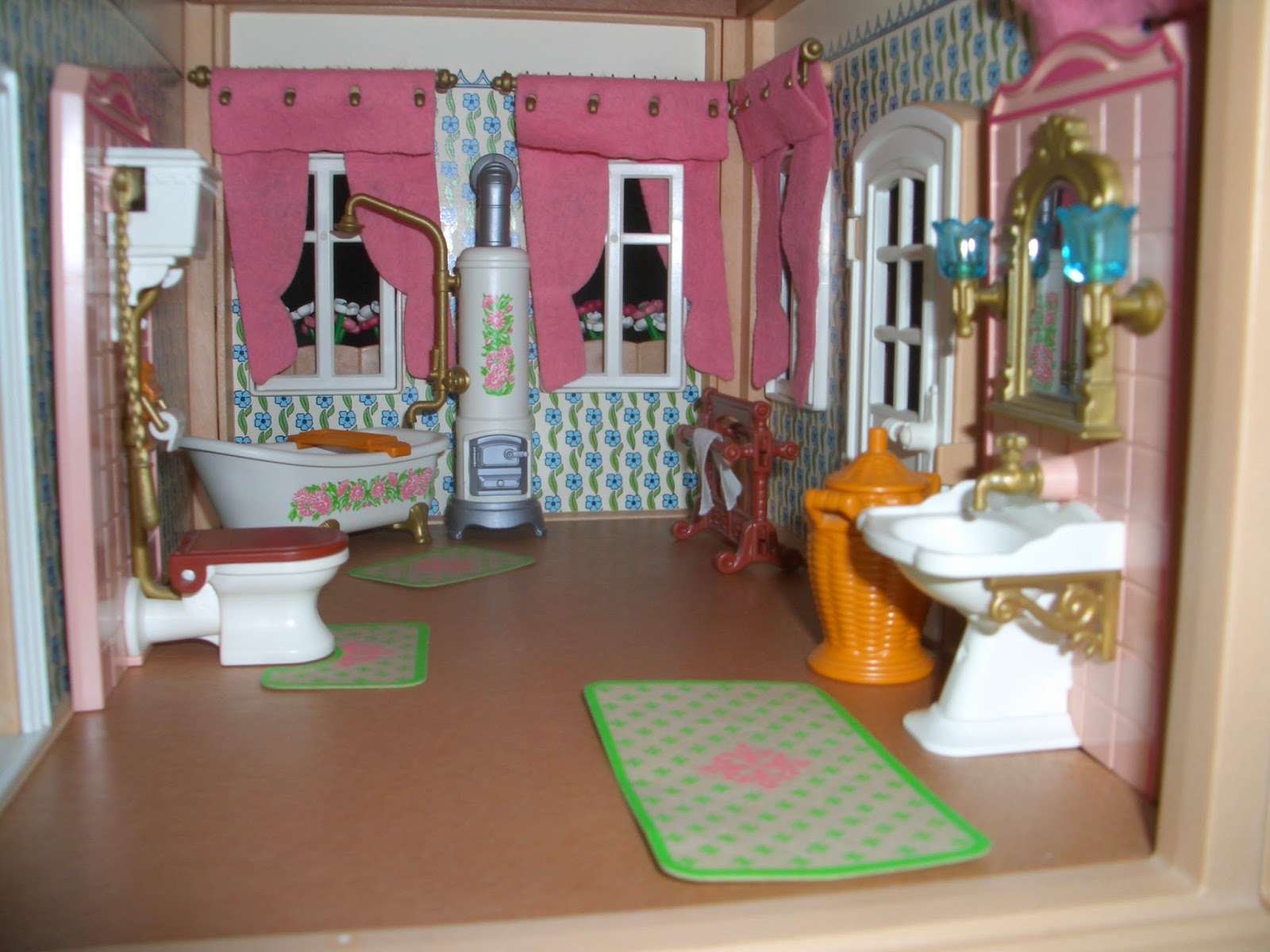 Who wouldn't enjoy taking a bath in this bower of roses? 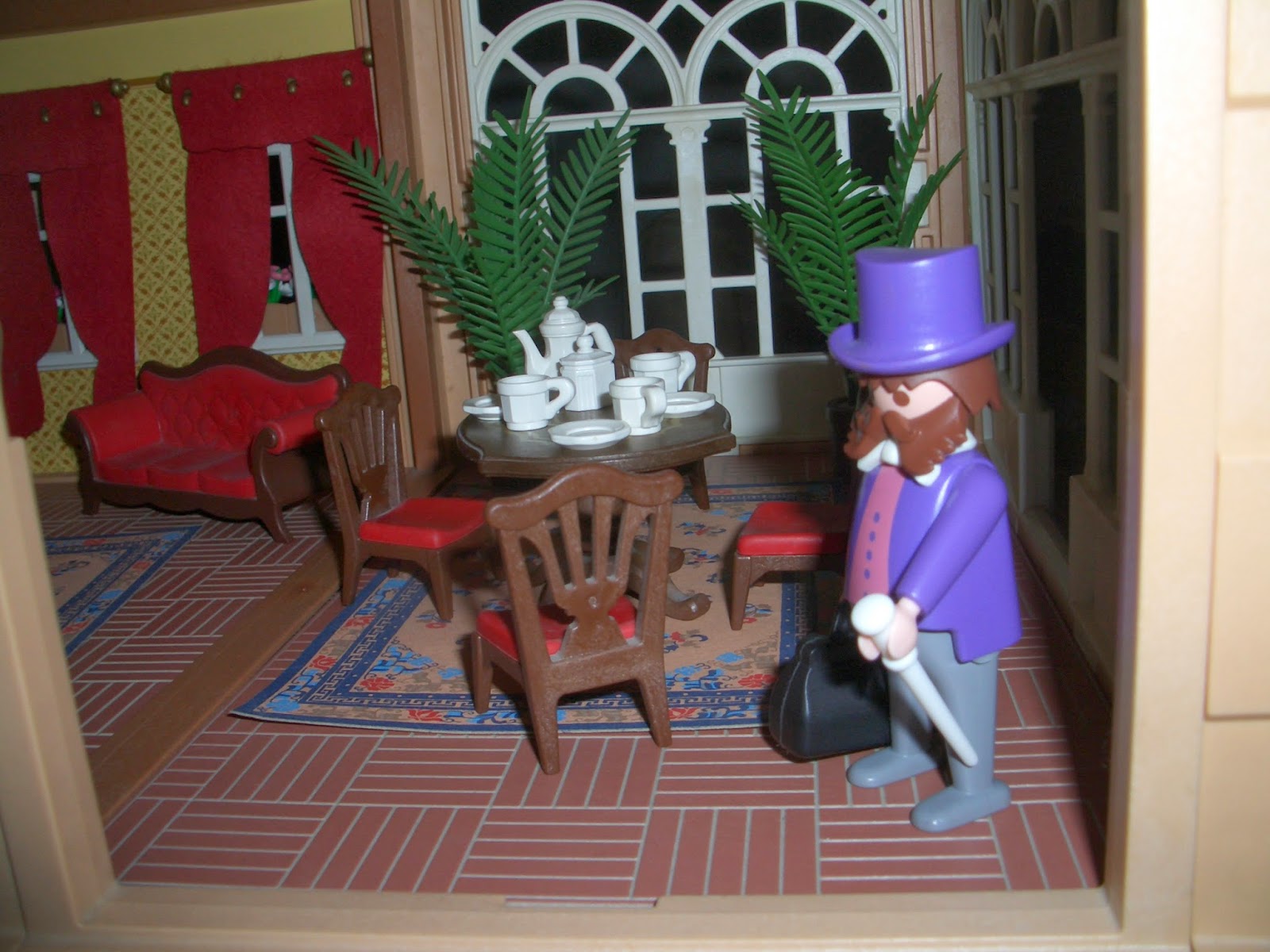 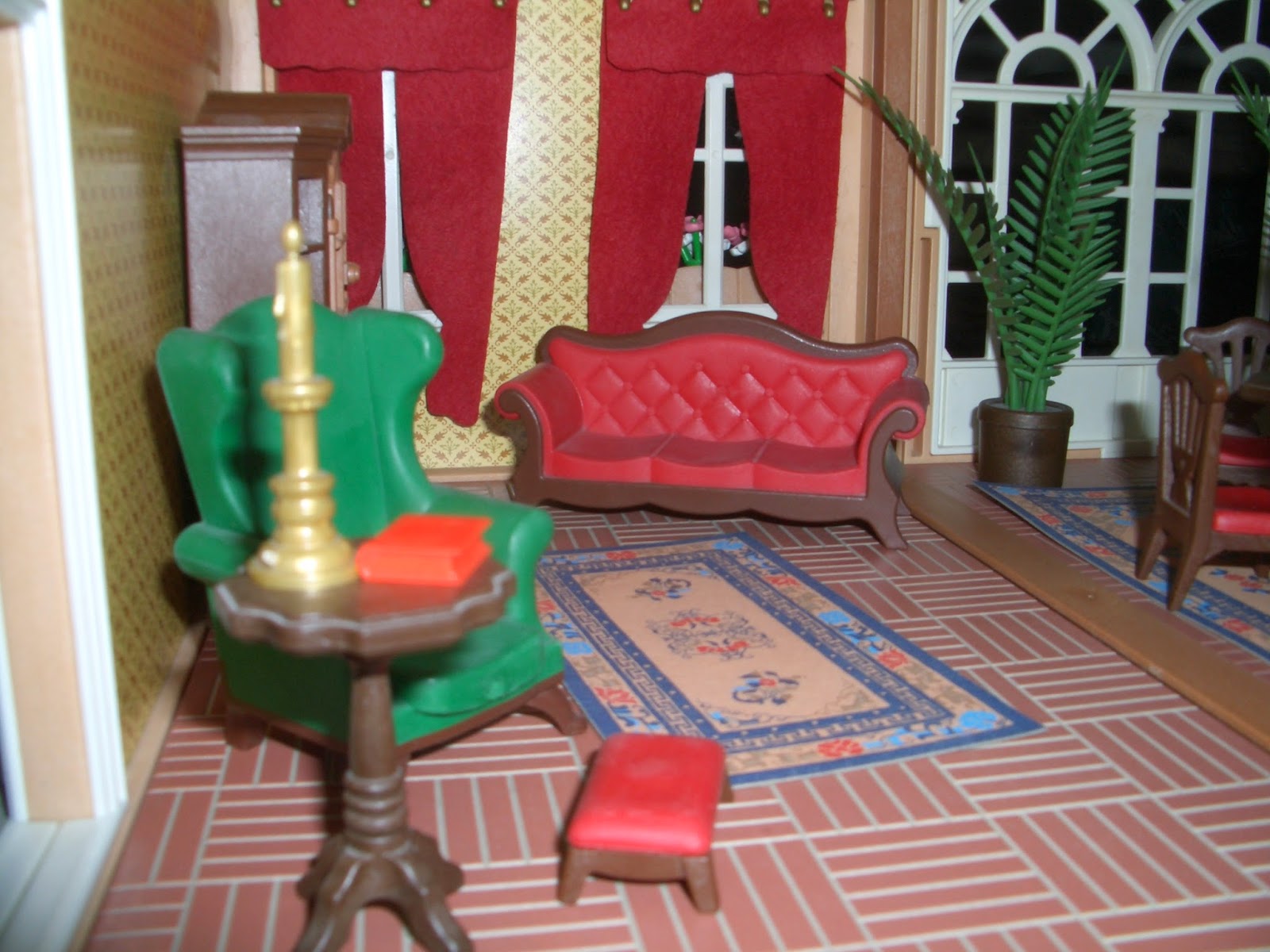 Papa is home from work


and of course his chair and book are ready and waiting for him as usual. 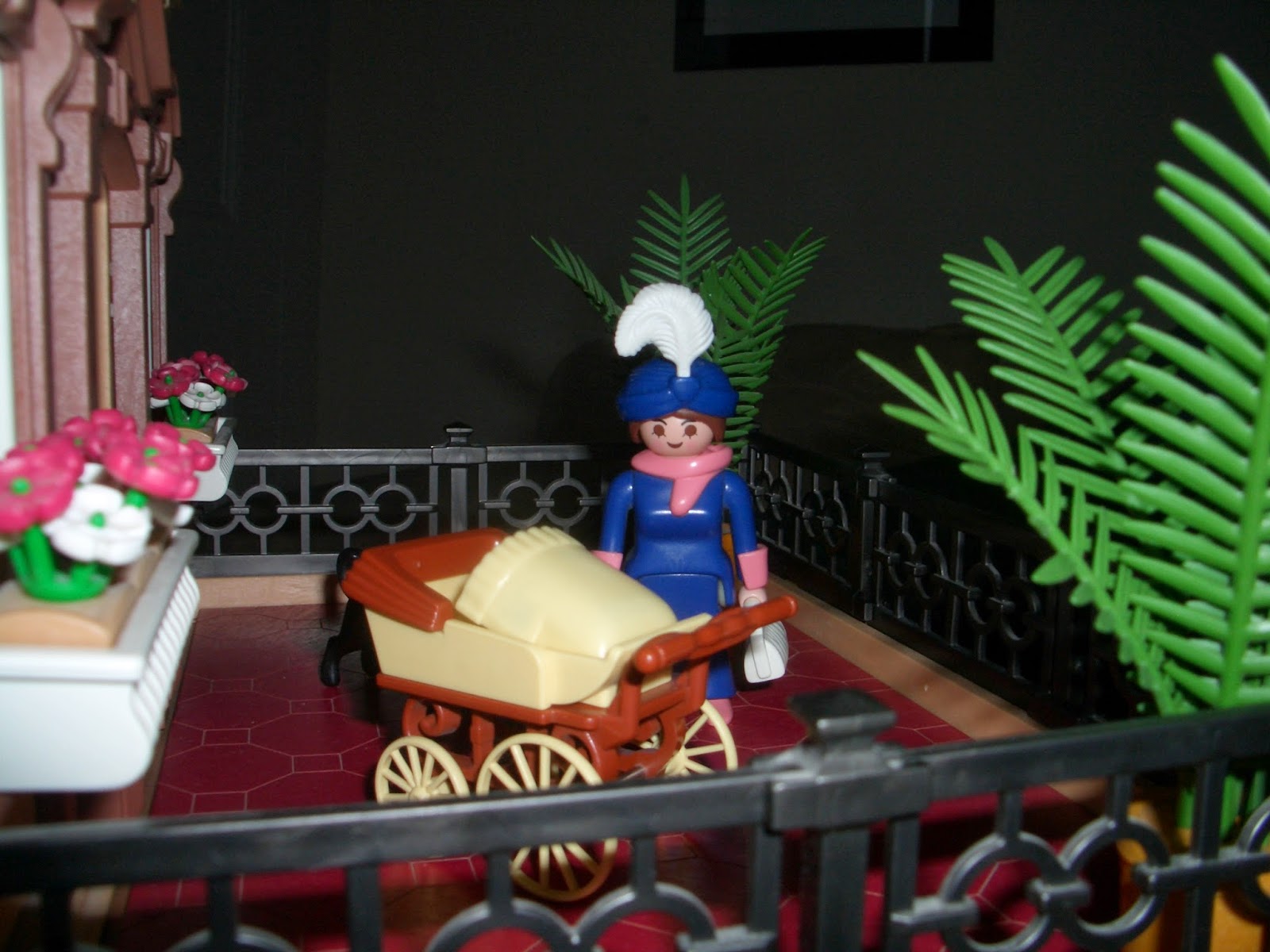 Sadly Mama is  not there to welcome him since she is giving Nanny a helping hand by babysitting on the roof terrace.

When I started this post I had no intention of it being this long and so picture heavy.  So the tale will not end today after all and I shall get another post out of it before Easter.  I'll take my Easter wishes back for the moment!

Please take careful note of the roundabout and the roads around it because it is due to make another appearance in the next post - watch this space and in the meantime thank you for following this diversion from the real world of dollhouses.......
Posted by Cestina at 23:29