Going Dutch or anyone for coffee? Final part 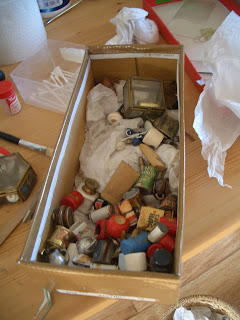 When  I unpacked the Dutch House on arrival in the Czech Republic I was faced with several packets of cereal (the Czechs are only slowly catching up with the idea that cereal made of oats is a good, healthy idea) and a number of shoe boxes jammed into the two rooms .  The most daunting one looked like this - in other words I had simply hurled everything off the shelves in the coffee shop when packing it up and now I faced the task of replacing it all bit by bit.

Actually I quite enjoyed it - I had forgotten what I had collected and placed in the shop over the years in the way of tea and coffee pots, machines, and other coffee related items and even more I had forgotten what had gone into the making of various "commercial"  items.

The coffee pots and grinders were easy enough to fish out, clean and place somewhere suitable.   Well, that was the case until I reached two lots of things made of real silver.   I tried to clean them with ordinary cleaning materials, using a soft toothbrush as I had been for all the nooks and crannies of the empty house, but they still looked fairly grubby.   I was deeply regretting the fact that I had left many bottles of silver polish with my friend in Germany en route from the UK - it's her regular order.


I certainly didn't want to buy a whole bottle for the tiniest tray set I had ever seen.

But one coffee pot was to go in the window of the shop so clearly could not remain tarnished and the tray set was annoying me.....So I let google be my friend and looked for a solution.   Toothpaste.....I was very sceptical but headed for the bathroom and lo it is true!   Toothpaste works very well on silver. 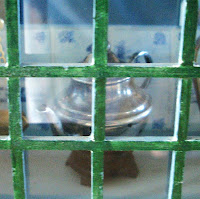 If you can spot the tiny tray set in the upper photo you can see the difference between the cleaned tea pot and the jug and sugar basin which are so small that I could not really hold them to get toothpaste on and off without damaging them.

After locating all the "hardware" in suitable positions, ready to be glued down at the end of the process, I turned my attention to the tins and jars of coffee.   I remember raiding various catalogues for labels - the house was made before the days of the internet and in-house printers. Cue digression:  If one wants to make small labels or books nowadays it is very easy - source the thing you want on-line, copy it into a Word document, shrink it to the size you want and  print it all out once you have a page full of book covers, labels or whatever.

That's of course providing you can get the flaming printer to work... excuse the language! 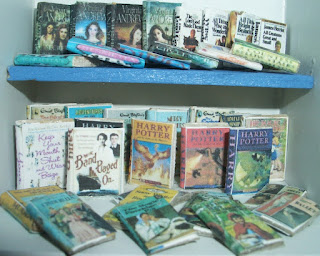 It's how I made the "Your Life in Books" present for my daughter-in-law last summer that you can see in the photos.

When I made most of my houses, however, it was a matter of sourcing the picture you wanted at approximately the right size and then taking it to a copy shop where they had shrinking and magnifying photocopiers and reducing it even further.   It was an expensive process because it was often a matter of trial and error before one got the correct size.

Most of the tins and jars were rescued from Barbie shopping trolleys or other miniature shops and then relabelled.   But I came across some adaptations I had done from everyday household items - the ever-useful toothpaste tube top for example, now an Espresso jar. 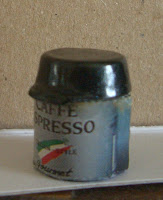 And because I hate lipstick I was very pleased with how I was able to recycle some vintage wand-like tubes of lipstick.


Once everything had been cleaned and dusted, and a few of the labels reglued, I put it all back on the shelves with a spot of Prittstick under each item so that the house could be safely transported to the town museum without a minor landslide occurring in the shop.

There were a few more things to sort out but since my daughter is here in the Czech Republic at the moment, busily crafting away with a well-equipped range of materials to hand, I thought I would ask her to make these for me.

The most important item was an advertising hoarding to cover up the fact that there was now a redundant window in the wall that had to be removed for museum display purposes.   It will now be leaning against the back of the house instead of attached to the side.   You can read all about how she solved the challenges right here - the rest of her blog is also well worth exploring.   Diky moc Alison! 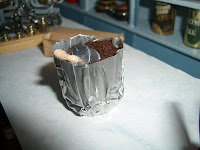 All that was left for me was to get the scent of coffee into the shop (which was done by using the failed attempt at creating a silver vase for the music room out of the metal base of a nightlight)  and to make the pulley which I had rashly mentioned in the already translated blurb for the museum.

Since I had only the vaguest idea of how a pulley worked I sat through a tedious You Tube video three or four times until I was quite sure I had grasped the principle correctly and then looked around the house for something to make it with.   I found a small packet of press studs left over from when we bought my three year old grandson some new jeans last year and they looked very promising.   I then cast around for something to use as rope.   I settled on the laces that I used to keep my specs round my neck, instead of permanently lost. I had got the mechanism partly rigged with a great deal of swearing and cursing when daughter appeared and said it was completely out of scale and anyway shouldn't be made of nylon.   Perfectly correct but I wished she had interrupted before I had ruined 3 perfectly good sets of specs laces.  Anyway, in the end I was pleased with the pulley and no one need know that the rope doesn't actually reach the ground so any sacks lowered by it would come to a messy end! 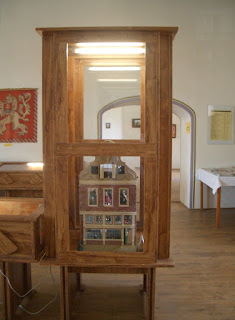 So the house was ready to move to the museum where it is now enthroned in a glass case and probably longing to be released into a museum of my own.....next week I should be meeting with the council again to have further discussions about the room I hope they will be willing to have decorated for me.   I will report back in due course.

In the meantime I am moving on to working on a 24th scale house so watch this space....... 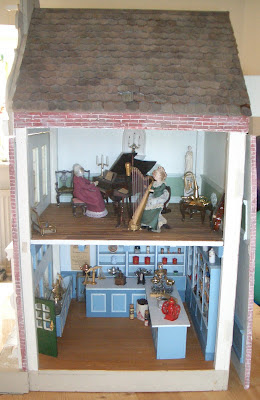 Oh - and the people in the music room?   Well, they had stowed away in one of the shoe boxes.   They actually live in the big Walmer dolls house I mentioned in a previous post - Grandmother and a visiting friend, Mrs Francis (so-called because she looks exactly like a friend of my mother's who was no friend of mine!).   They must have had an urge to travel since there was no intention of them coming over to the Czech Republic.   But since they are here I thought that they would be more comfortable in the dignified surroundings of the music room, with coffee always freely on tap,  rather than in my granddaughter's more modern and rather over-crowded house.......