A short post today to thank all those who sent positive thoughts for the meeting with the Town Council earlier today.

Those of you who have been faithfully following this tale from the beginning will remember that, although I am happy to pay rent and the running costs of the museum, the room I have been offered, though well-sited and a good size, is in  dire need of redecoration and rewiring.    These costs I really cannot afford to carry myself.

A friend, Mirka,  came from České Budějovice in case I needed help with my Czech. We carefully prepared the arguments we thought I might need to persuade the Council that a dolls house museum would be a tourist attraction, and therefore of value to Bavorov.  My friend Jana, who had previously done all the negotiating with the Mayor, left for Bielorussia this morning.


Earlier in the day the Mayor had called round to check I was coming to the meeting.   He caught me still unprepared for visitors - the Czech day starts at least two hours earlier than an English one. 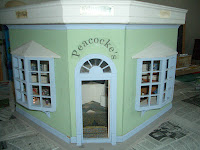 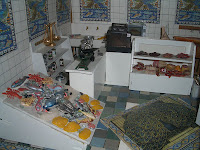 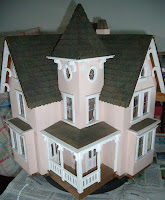 However, nothing daunted,  I gathered up my butcher's-cum-fishmonger's shop which I had hastily tidied over the weekend, and my little, unfurnished and very grubby Fairfield, to give the Council an idea of what would be in the Museum, bearing in mind that although doll collecting is a known hobby in the Czech Republic, dolls houses barely exist here.

For good measure, and given the Czech passion for mushroom collecting - on arriving for a weekend visit one does not enquire about the weather but greets one's host with "Jsou houby?" ("Are there mushrooms?") - I decided to add Peter the Mycological Rabbit to the mix.  He is housed in a sort of fishing basket from Ikea. 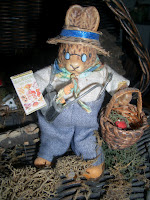 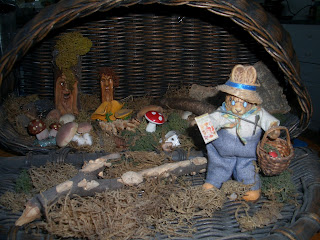 When we arrived I decided that "Town Council" was a misnomer and that this was probably the Inner Cabinet, or the Finance and General Purposes Committee.   The Mayor, three others, and the Clerk who is very enthusiastic about the project, but of course has no say over financial matters.   We sat down and held forth briefly, me in my best ungrammatical Czech, but it then turned out that Jana and the Clerk had done their work well.   Everyone already knew that the room as it stood was no good, they had had a preliminary meeting and agreed that they would redecorate as I wished.   I then threw in the electrics which caused a slight hiccup but they agreed to finance that as well.

A meeting is now scheduled with the Mayor and the head of technical services on Wednesday morning, at the room, to take things forward.   I blenched at the idea of 8.30 so we settled for 9am.....watch this space. 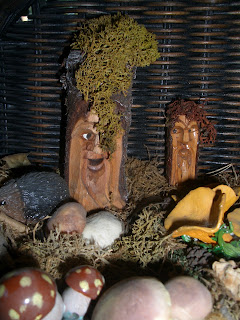 The Czech wood spirits were clearly with me!
Posted by Cestina at 21:08