...is the very obvious title for this blogpost, words taken from a well-known German nursery rhyme. As those who have read my Christmas blogs before will know, I like to have some appropriately seasonal music along with the writing.   Sadly this particular song is deeply uninspiring.

In fact lanterns do not seem to have inspired much in the way of song. There's this - which I have never thought of as a lantern song, but the pictures belie that - apologies for the earworm.....

(In the olden days, before Ghastly New Blogger, you would have had here a pretty picture leading you to the video - now it requires many hours of work to achieve this so the link-clicking is left to you. My apologies)

So why Laterne anyway?  In this strangest of years, despite in theory having had much time on my hands both in the UK up to August and then over here in the Czech Republic where I am comfortably ensconced for now, I have been deeply uninspired to create anything for Small Worlds.   The museum was open from mid-June, thanks to the efforts of friends over here who got things going and the museum staffed, so that I was able to take over when I arrived in August.   In terms of visitors it has been a stunning year, probably because many people stayed in the country rather than holidaying abroad, but in terms of creation and blogposts, zilch from me.

But delightful as the summer window, installed by Ondrej and Jana, was, my pride would not allow me to leave it in situ over Christmas.

However, there was a problem in the workrooms of no space to work in - when they removed last year's Christmas window I told them to just deposit stuff wherever there was a hole, and they did. Added to which health problems meant that when I had left in October 2019 I had barely managed to produce that window, let alone clear up after myself. 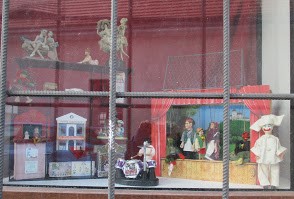 And my legs are even less cooperative now.  So I desperately needed something this year that I could create with minimum movement, effort, and space.

And then a light dawned.  We own many lanterns - we love candles in all shapes and sizes, and even more so when inside a pretty lantern. And what is the inside of a lantern but a tiny space into which one can insert a miniature scene? Sorted! 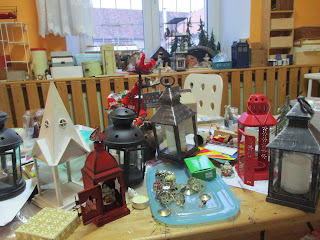 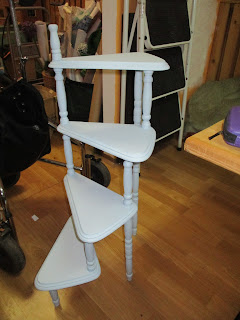 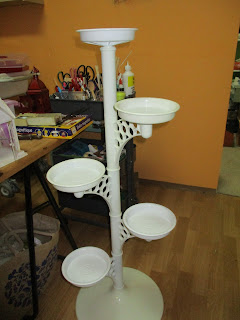 Add to the lanterns two flea-market stands and a vast collection of Christmas objects, including the amazing children who have featured in every display over many years (click here for proof of their versatility), it must be possible to produce a window display. 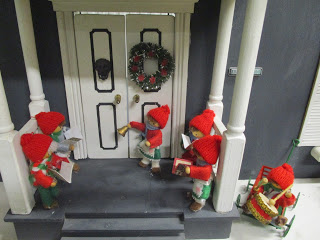 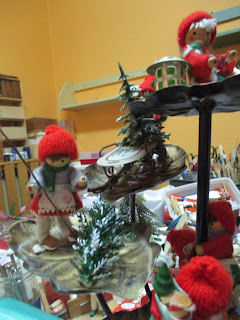 And Butterfly, though here, is occupied with her own projects but she would surely put in the window with me, something my legs will not allow me to do alone at present.

And lo! So it came to pass.  I have no intention of struggling with new, unfamiliar and uncooperative,  Ghastly New Blogger (henceforth to be known as GNB) so most of the rest of this post will be photos without text - the processes are self-explanatory.  It comes, as ever, with warm good wishes for a peaceful Christmas and many hopes for a somewhat more normal 2021. 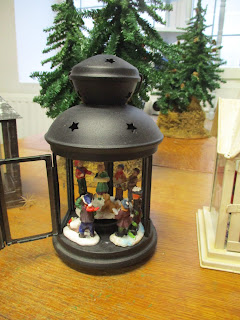 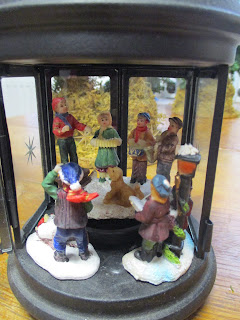 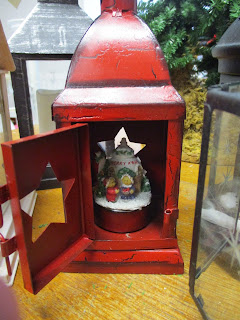 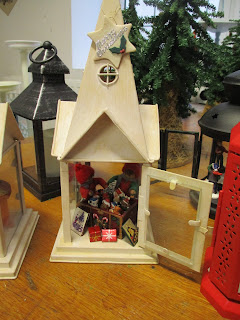 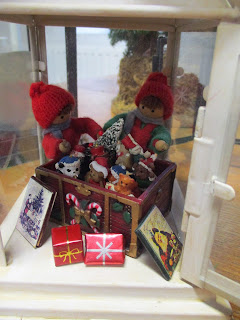 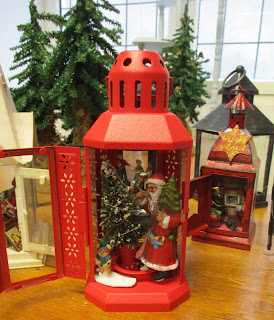 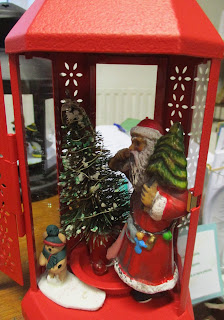 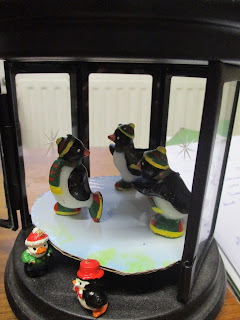 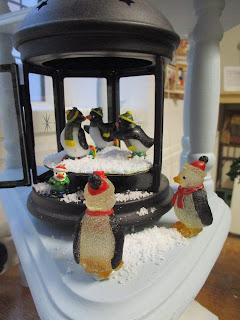 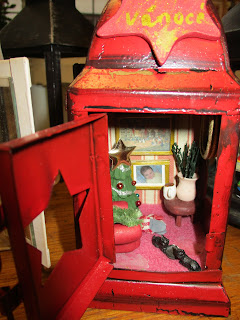 This little room has been "borrowed" from a box created by my daughter-in-law, Laura, some seventeen years ago and features my lovely grand-daughter, Anya,  as she then was - at that time catless!
And the children take centre-stage on their very own stand - some strange sort of water-lily feature, another flea-market find..... 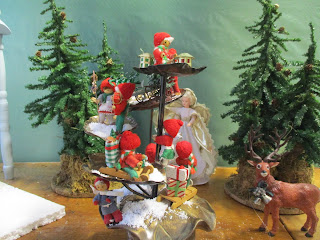 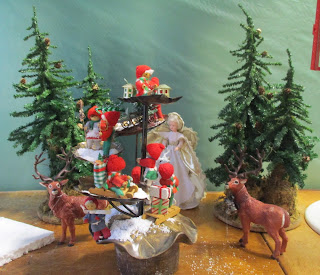 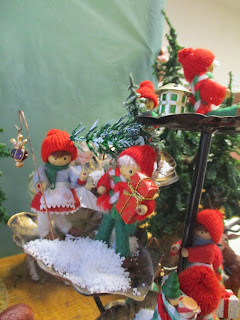 And so to the window display in position - as usual apologies that the photos are not super-clear, window glass and reflections are not helpful when trying to take pictures from outside, but at least Butterfly does better than I do. 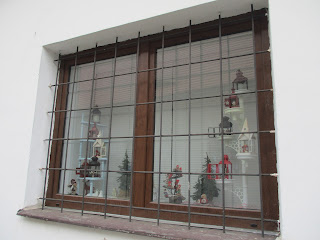 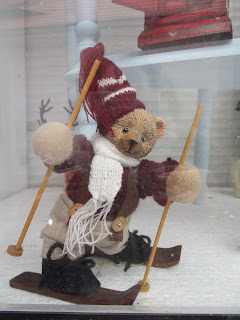 Is he at the top of the ski-jump or shouting "Let me out!"? 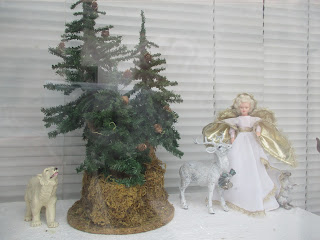 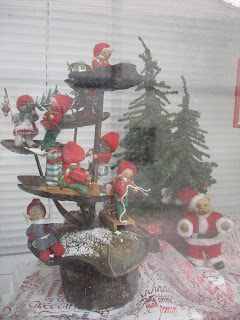 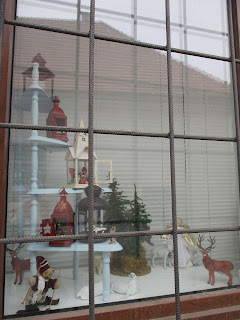 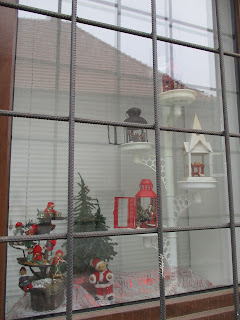 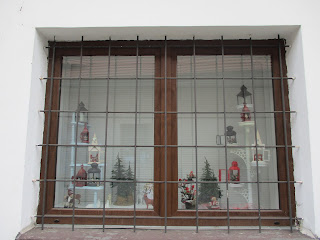 I hope you have enjoyed these glimpses by lantern-light and I sign off with the traditional Christmas greeting and a light (!) musical fantasia. (I managed to upload one video.)
All good wishes for the festive season and the coming year! 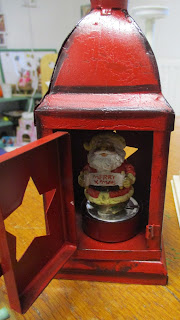 #newbloggersucks
Posted by Cestina at 15:44