Once again I have been fairly silent during the summer in the Czech Republic, not because nothing has been happening in Small Worlds, but rather because quite a lot has and I have been battling bits of my body to let me get on and enjoy it!

The main problem, apart from arthritic knees, has been in my left hand which seems to have lost the ability to feel things properly. This not only makes moving the tiny items in Small Worlds difficult - I had no idea how much I use my left hand to take things in and out of houses, let alone when doing a lot of the fiddly work (piplačka in Czech) - but it has had a terrible effect on my typing, mainly by inserting the letter "g" all over the place in an irritatingly random manner.

However, since the time for me to return to the UK is rapidly approaching, I thought I should try to tackle at least the first of the two posts I mentioned in my last blogpost about Rose's 102nd birthday present (she loved it by the way)

In the spring of 2016 I had a phone call from a friend in England, Pat Klijn, the creator of the lovely collage cards I sell on her behalf in Small Worlds and elsewhere... 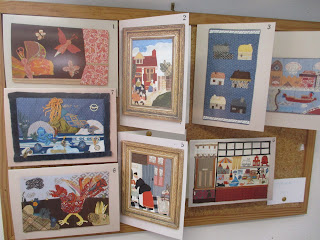 ....and co-author of two books about about her locality... 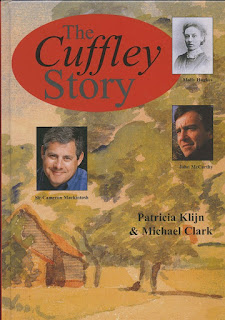 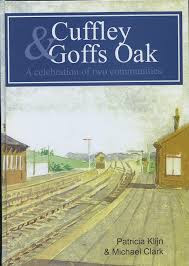 ....to say that a friend of hers had rung to ask whether she was interested in the component parts of a dolls house.  (Pat has a small collection herself.)

She wasn't, but rang me to see if I might be. It turned out that the parts could be built into a scale model of one of the Francis Street miners' cottages featured in the Beamish Open Air museum. Her friend's mother had visited Beamish and fallen in love with the cottages; she had commissioned someone to draw up plans and make one.  However she had sadly died before the project had got any further than the wood being cut out and the pieces had lain in her loft for some time. 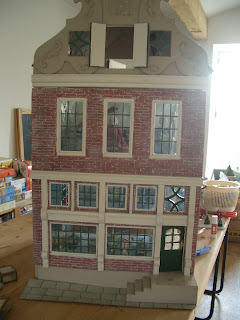 I went to take a look and was very certain I did not want to tackle the construction - I am more than happy to take on exterior and interior decoration - see the Dutch House for example - but I have no interest in woodwork per se. 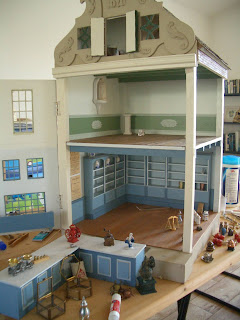 But I do know a man who does!   I lost no time in contacting Colin Rose, he of the osprey construction, and creator of the South Bohemian farmhouse (both visible in the first post this summer) to see if he might be interested.  And he was!

He lives in Huddersfield and I in Hertfordshire so we had to arrange a transfer - we met in the Old White Hart in Lyddington , a pub I can highly recommend. 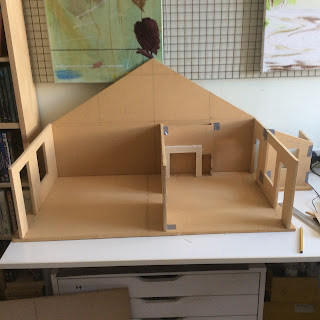 " I met with Colin last week halfway between here and Huddersfield and we
exchanged the cottage for my car seat.   As you can see, he has already started on it. And there is much emailing to and fro about windows and stairs and how the hell he constructs the whole thing so that one can see inside sensibly!

I will keep you posted and you can pass it on to your friend."

The rest of this post consists mostly of snippets of emails and the photos that Colin sent me during the construction process - I just hope I can get them in the right order!  The first photos arrived pretty soon after the transfer.....

Then there was a gap of several months before the next photos appeared. There had, however, been a fair amount of emailing between us about sourcing doors, windows, a staircase and various other things.   But in the end Colin decided to construct everything himself, including the working sash windows.... 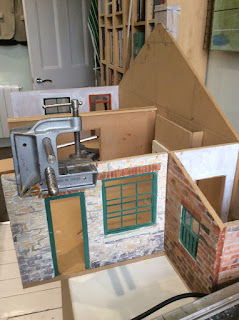 And that was the last I heard until the completed house (not in flat pack format!) arrived in my workrooms in Bavorov.   I am not sure if that was in 2017 but I rather think it did not appear until 2018.

Either way, it sat in a corner of the first workroom whilst I tried various items of furniture in it without any very clear idea of getting down to tackling the interior properly - no rush I thought.  I could not have been more wrong and you can learn all about that in part 2 of Heigh Ho!, coming shortly.

By the way, why Heigh Ho! as the title? Well two reasons - first of all I cannot think of mining without tghe (look, gthere are some stray "g's" appearing - I tgook all tghe others out) earworm of the song of the mining dwarfs in Disney's Snow White, and secondly because, on a despairing note and pronounced a little differently, it's been frequently on my lips this summer when contemplating the political mess in which the UK now finds itself....!

In other news, Small Worlds was delighted to once again receive a visit from a group of students from several different countries who were based for a week at the local school... 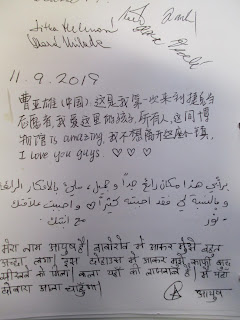 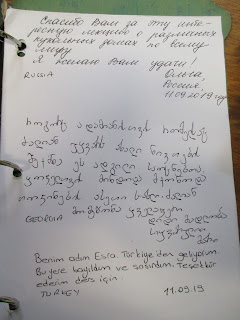 They were, in no particular order, from Georgia, India, Russia, Jordan, Turkey and China.

I look forward to seeing you all again soon for part two of the saga of the Francis Street miner's cottage.  In the meantime heartfelt thanks, once again, to Colin for his hard work on behalf of Small Worlds.  And thank you to Pat for thinking of me!