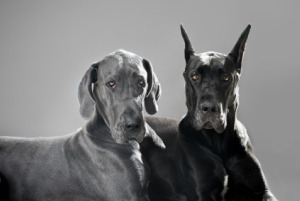 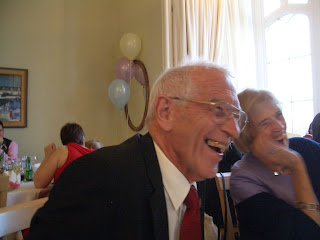 Old friends, and my brother's in-laws.   They are both now in their nineties and Butterfly and I decided that, since they could no longer come to England to see us all, it was time for us to visit Denmark again, a country where we have spent several happy holidays in the past.   So in early February we headed there and had an excellent short break.

Whilst there I was reminded that some twenty odd years earlier, on the occasion of Knud's 70th birthday, I had made him one of my "special presents". 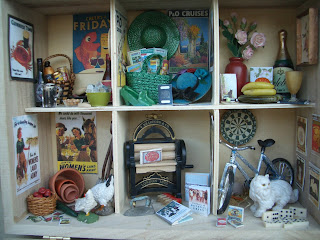 Many of the specials I have made over the years have been to celebrate new arrivals to the world, but a few have gone to particularly valued friends, such as the life in a box made in 2016 for my then 99 year old friend Rose.

To put Knud's life in a box was a huge challenge. A true Renaissance man, highly skilled in so many different fields - music, art, sports - that it was hard to know where to begin.

But as always I started by seeking out a suitable container, half the battle when trying to create this sort of gift.  Knud as a young man was so able an artist, musician and sportsman that he could choose which of the three to make his career choice, and which his hobbies.   He opted for a career in adult music teaching, his main instrument being the violin.

So it was an old violin case that I sought out and divided into five floors, each storey representing part of the story of Knud. 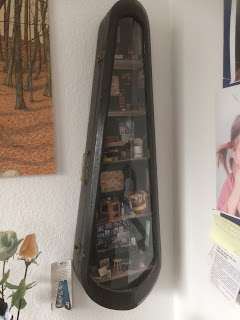 (There are no photos on this occasion of the making of the gift which happened way back in 1995. All the photos bar the first and last - not including the hounds - were taken by Butterfly on her phone whilst we were on our Danish break.  Foolishly neither of us had thought of travelling prepared to write a blog post following our visit.   It was not until we saw our gifts in situ that we thought of asking permission, freely granted, to blog about them.   I say "our gifts" because neither of them could have come about without Butterfly's active participation - for example all the "reproduction"art works in the first gift are by her.) 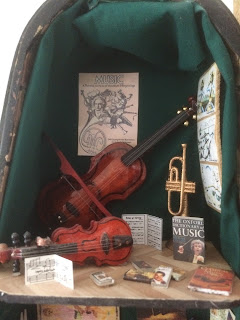 The top floor has the music - the instruments that Knud or his children played, the kind of music he enjoyed, and indeed still enjoys. Regrettably, I seem to have overlooked placing a conductor's baton in there, a reminder of the many choirs and orchestras he has led in his life.

On the side wall is a nod to the British illustrator, cartoonist and pun-maker par excellence, Simon Drew, since Knud himself was no mean published cartoonist, supporting himself through university by selling political sketches and cartoons to the local paper. 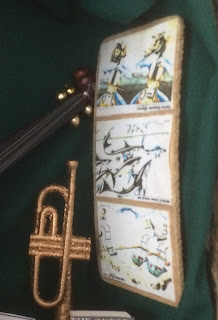 I have this fantasy that the two of them once met, which may indeed be true during one of Knud's many holidays in England, but even if they didn't, I am sure they would have enjoyed each other's company since they share the same dry, deadpan sense of humour.

Cue digression:  A monthly subscription to a regular delivery of Simon's cards kept me sane and laughing for many years and I have since bequeathed the several albums I accumulated to my niece, Knud's granddaughter.   Clearly a sense of humour can be inherited!  Actually, having just looked at his website, I think I shall put a new subscription onto my next Christmas wishlist.   Simon can still lift my spirits on the darkest day.

The next floor down shows the range of sports that Knud was involved in over the years. 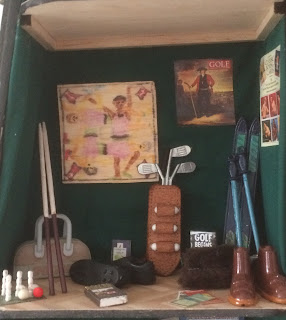 The hiking boots are particularly significant - he walked part of Hadrian's Wall with his grandson not that many years ago....

The golf clubs are a reminder of the fact that Knud was the founder member of the local golf course, instrumental in setting it up.   There sadly wasn't space for a vaulting horse to represent his skill as a gymnast, honed during his time as a conscript in the Danish army.

We own the original of the wooden painting of the athletes on the back wall but infuriatingly it is at present in storage and so, unlike for all the other artworks to be found in the violin case,  I have no photo of it. 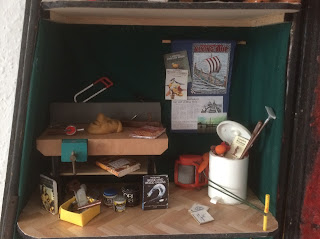 On the next floor down, comes what is to me possibly the most significant of the rooms depicted - the workshop where Knud's wonderful carvings and art works were created. 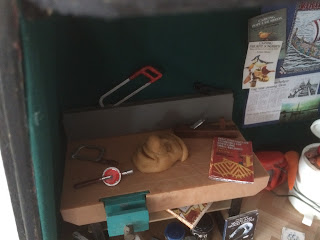 You can spot one in the process of being carved right now .... 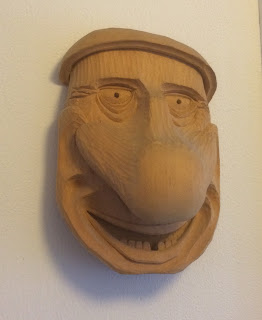 ....and here is the full-sized finished creation.... 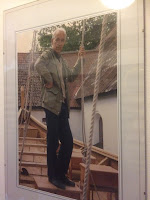 On the corner of the workbench is a book called "Basic Construction Techniques for Houses and Small Buildings" - a nod to the fact that Knud built two extensions to the family home with his own fair hands. 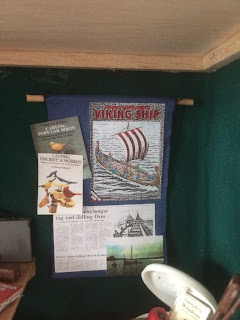 On the wall behind the workbench is a newspaper cutting about the Viking ship, the Jelling Orm, built in 1985 by a team of volunteers inspired and led by Knud.  It still rides the calm waters of Lake Fårup in the summer months, but with a horde of tourists on board, rather than Vikings! 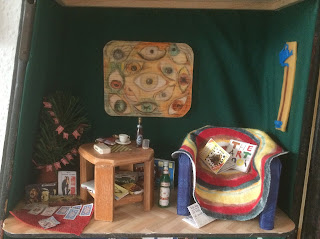 Down another floor and we have a living room, the chair graced by a throw, the full-size version of which was crocheted by his daughter Mette, who many of you will know from her writings in the magazine Dolls House and Miniature Scene.

Her current column takes a tongue-in-cheek look at "clubbing" (the miniaturist's kind of course) and her earlier ones covered the subject of tiny antiques with a role to play in dolls houses.  And not forgetting of course her work in the early days of Small Worlds.
Signs of a relaxing evening abound in this room - a bottle of beer, a glass of Akvavit, the ever-essential cup of coffee which is sitting on .... 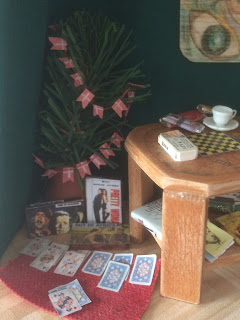 ......a specially designed games table (as made by Knud of course) complete with chess board and a Danish version of Monopoly, some cards and naturally some favourite films and music.


On the walls are two more works of art, one depicting the eyes of many friends, relatives, and others.... 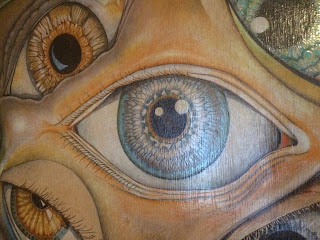 The full-size version is fully five feet across - a truly in-depth view.  Was it really Shakespeare who said "The eyes are the window to your soul"?

Butterfly was one of those who sat for this many years ago - her eye takes centre-stage... 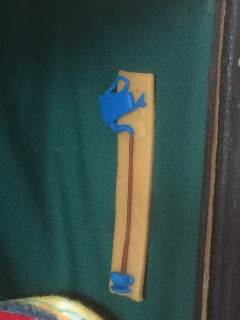 And then of course there is the ever-essential cup of coffee, both small.....

....and large!  Almost a four foot drop from pot to cup.  A barista with a steady hand poured this one!

The little games table is also still around in real life... 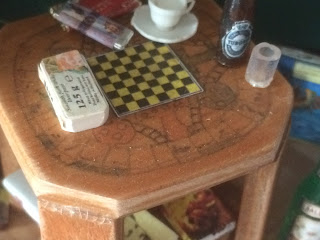 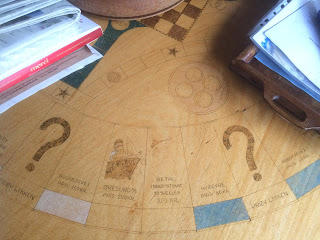 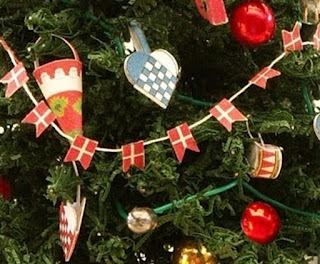 And in case anyone is wondering why there are Danish flags all over the plant in the corner, it is meant to represent a Christmas tree.   Danish flags are commonly to be found amongst the many home-made decorations at Christmas time.   My brother was very touched when he married into this Danish family to find a string of lovingly made Union Jacks also adorning their tree on his first Christmas with them. 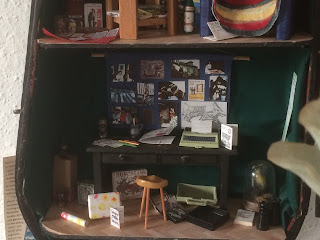 The ground floor shows Knud's desk, a wall hanging of family photos, showing key events, and some examples of cartoons, and games designed by him.... 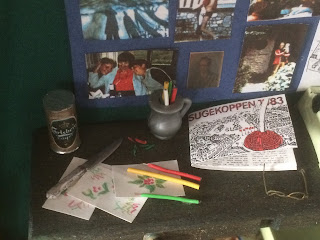 Tucked on one corner is  the logo design for the 1988 6th International Coffee Congress in Brighton, which made its way on to all the conference goodies such as folders, badges and even t shirts and umbrellas (the latter now somewhat faded). 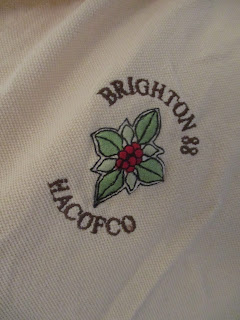 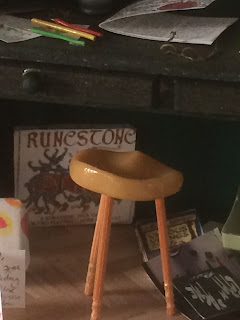 We hunted in vain for the fullsize version of the stool which we think he also made.

So in lieu of that, in no particular order, here are some other full-size creations - though with so many wonderfully witty things to choose from, it was hard to know which favourites to select! 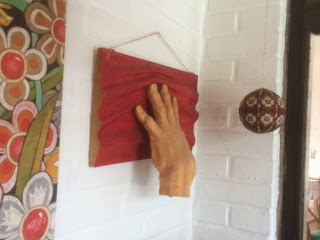 The final photos are of the gift being presented to a truly remarkable man way back in 1995, and a view of it today on the wall above his desk - Knud's insertion of a see-through front was a definite improvement on the original! 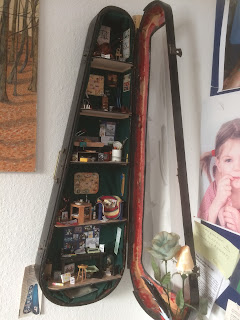 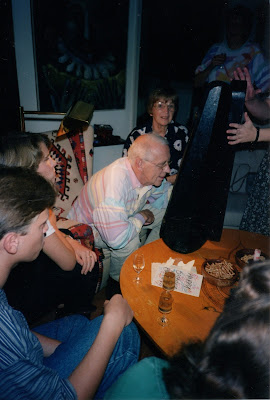 After he had opened the present and all the oohs and aahs had ended, my sister-in-law turned to me with a grin and said "My mother is 70 next year......"

That's why this blog post has a Part Two - if you have enjoyed Part One then I  hope you will join me for the sequel to the Viking saga sometime next week.....

PS Remember that you can click on any of the photos to enlarge them and view them as a slideshow...