It seems a very long time since I sat down to write a fresh blog post.   As I have said before, when I am in England I find it extremely hard to connect with Small Worlds and what goes on there.   Especially if I have forgotten to take enough photos to see me through the winter.....

But that excuse has now evaporated since I have been back in the Czech Republic for nearly two weeks and in fact Small Worlds has been open for just one morning, to coincide with the local Farmers' Market on 23rd May.


Although the market was less well attended than usual this year, we had a number of highly interested visitors in the museum - it is always a sheer delight when adults engage fully with what they have expected to be just "something for the children".  And I think I may have also found another seamstress prepared to tackle tiny dresses.   The Gosthwaites fashion buyer will be delighted!

As soon as we closed the doors at noon (we had opened at 8am -things start early here) the friend who was helping me and I unloaded the stuff I had brought over from England.   I spend much of the winter months trawling the local charity shops to find new items for Small Worlds.   There are very few similar opportunities in the Czech Republic since charity shops barely exist.   And nor, of course, are there many dolls house items - the hobby is almost unknown here. 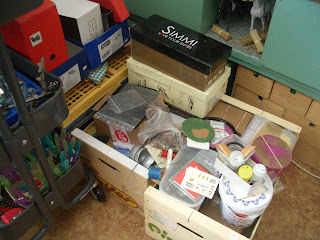 But I am getting ahead of myself - I arrived back here on the Wednesday night before the scheduled Saturday opening and during the drive from Germany I had been racking my brains about a new window display that I could set up as quickly as possible.   People had been looking at the same display since the end of last October.... 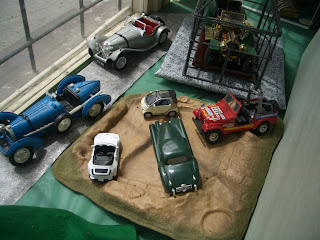 No brainwaves whilst I was en route but as soon as I arrived in Small Worlds, my friend in Bonn's prophecy that I would think of something once I was there, came true.   "Cars" I thought - I have many, they are easy to shove in the window and will also serve the dual purpose of showing that there is more to Small Worlds than just dolls houses. 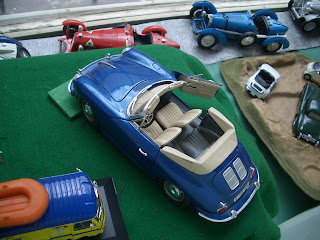 No sooner said than done - not my best display, and I shall change it soon - but it has attracted quite a lot of attention, particularly from men and boys whose noses are glued to the window amidst loud discussions about what cars they are looking at. 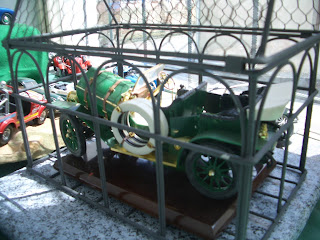 One other task before I got to the boxes - I have been lucky enough to be given a dinky little set of drawers by "the doll people", Anna and Jiři Šlesinger, who you have already met several times on my blog.   I now stay with them at their lovely home in Bavaria on my way down and back up again.  It's stuffed full with amazing dolls, nearly all made by Anna - you can see some of them here at an exhibition she held three years ago in Lanškroun. 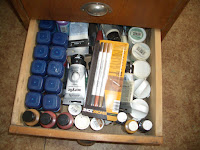 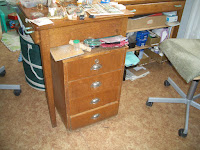 I was very much hoping that the drawers would slide under one of the working tables to replace some of the untidy shelves there and sure enough, the fit was as if made to measure.   Butterfly would be delighted to see the way paints, glues and other necessary items are now neatly stowed away - she is so good at creating order out of chaos! 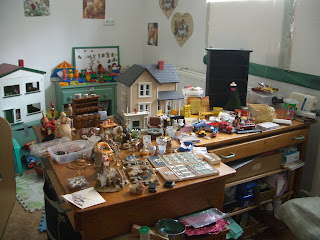 When I finally got to the boxes I decided to unpack the whole lot and spread it out so that I could take photos before trying to find a home for everything.   Eventually you should be able to spot where some of the things turn up in Small Worlds....

So here's a closer look so that you can recognise them - 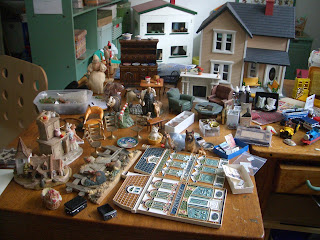 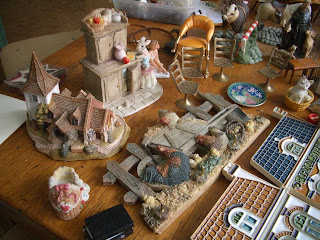 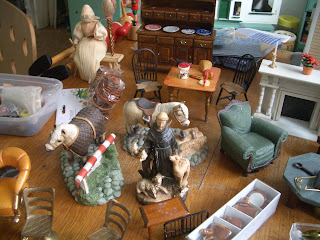 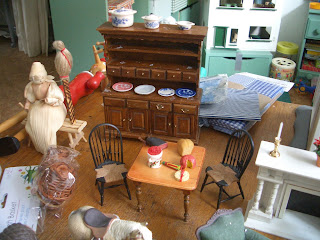 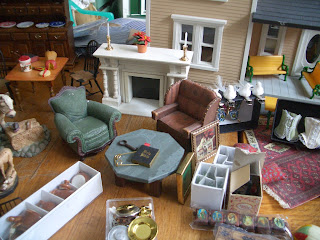 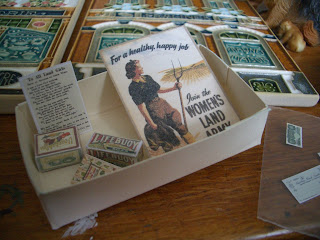 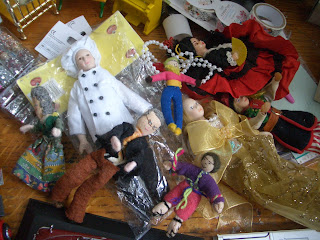 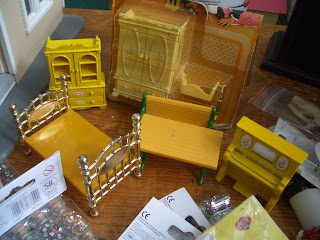 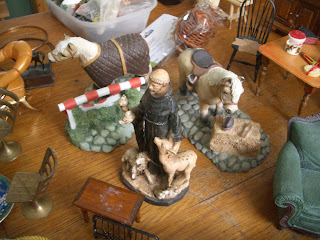 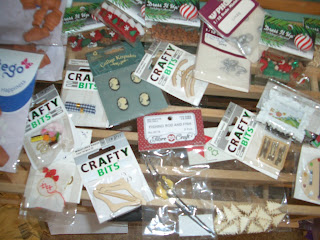 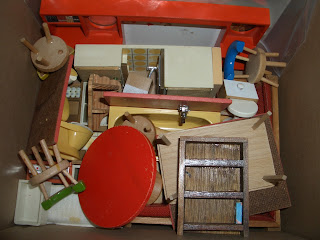 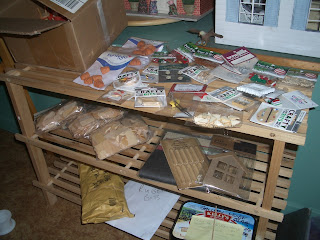 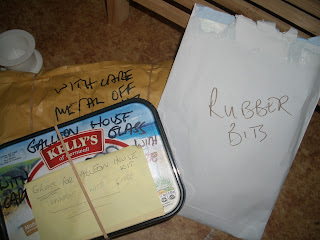 The chef and the wonderful set of kitchen table and chairs were both gifts from followers of Butterfly's blog - many, many thanks Chrissie and Sandy.  The table and chairs have already found a home, though it may only be temporary 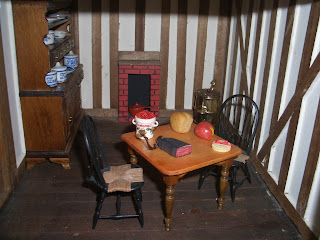 Needless to say, when I began putting things away I got side-tracked and found myself setting a scene instead of shoving things in drawers.

It occurred to me that one of my many breadbins had just the right wall paper to give a home to the elderly couple who have been sitting comfortably in their Raine's Take a Seat chairs on my bedroom bookshelf all winter.  (I love this series of chairs and it irks me dreadfully that most of the ebay hits for it are in the US, and thus out of my reach because of the postage costs. These two came back with Butterfly after her sojourn in New York last year) 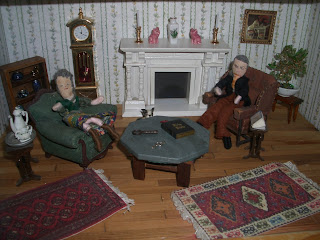 Since Darby and Joan have been out in the world for months it seemed a little churlish to now banish them to a drawer!  By the way, does anyone recognise their maker? They emerged from the box of Lundby furniture I acquired somewhere.

I ended up stealing so much from a very ancient roombox made out of foamboard that I decided to retire it completely and replace it with this new scene.   I think they look very contented in their luxurious abode..... 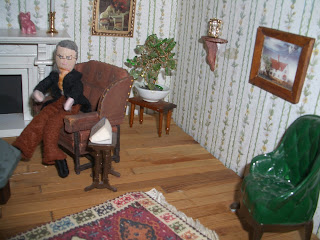 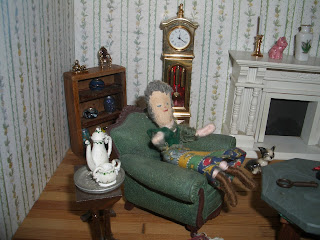 I think that's about it for this time - just two more new additions, both from the animal world.  They  came from the best flea market I have ever visited - a giant event on the banks of the Rhine in Bonn.   The setting is amazing and it is so large that we only managed just over half.   I can't wait for the next one in October! 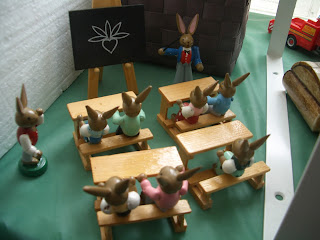 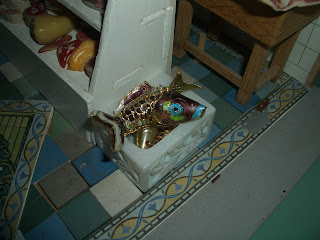 So on that fishy note I will sign off for now and return to getting Small Worlds ready for Saturday 13th June when it opens properly for the summer season - its third!   Thank you for following the journey so far and I look forward to seeing you all again soon - very soon, I promise.