That Old House in Paris....Chapter One


....all will at last be revealed!    I am sorry it has taken so long but some essential items were missing until this week and I really didn't want to post until it was completed. 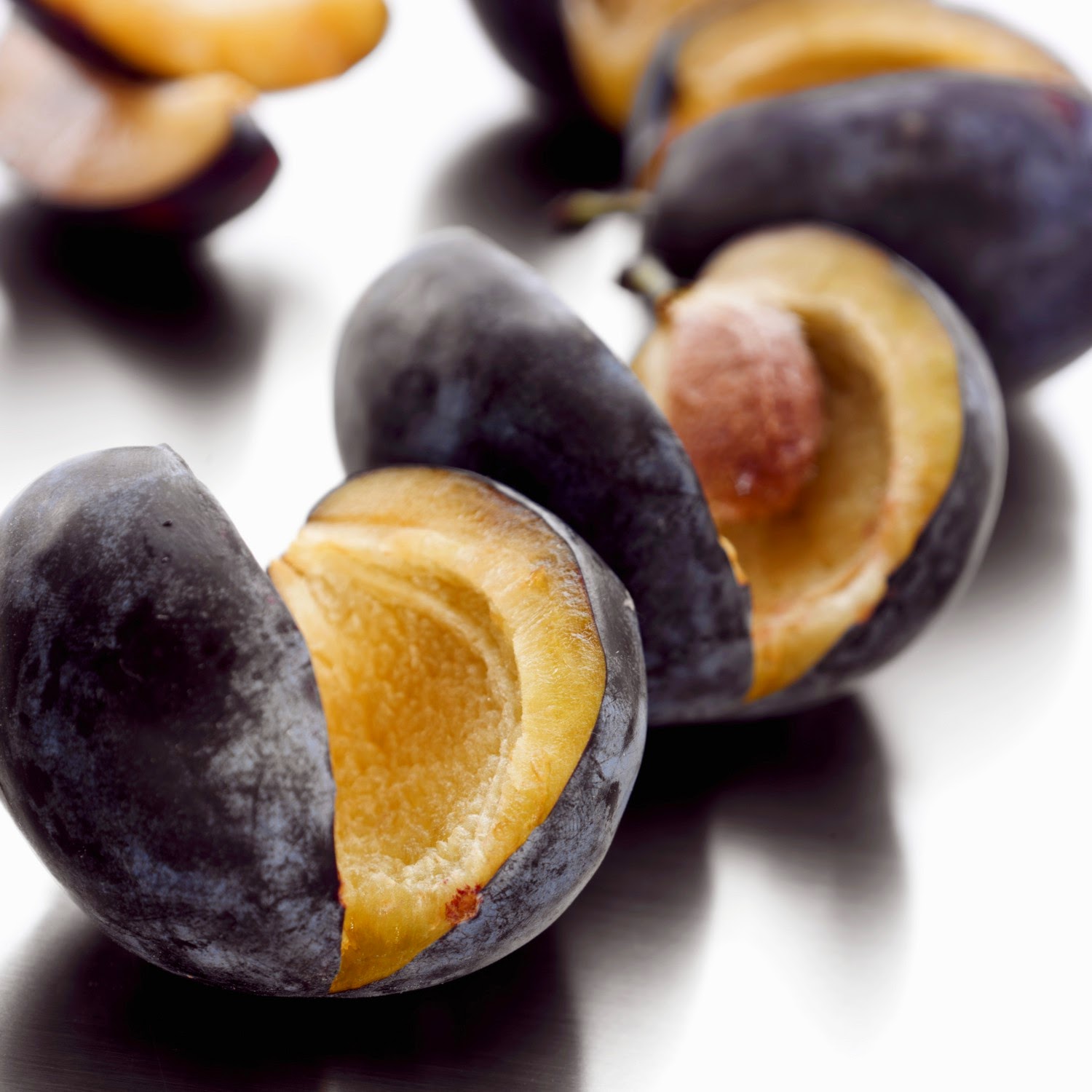 (Cue digression: I now owe you even more apologies for the long delay between posts.   This one was 2/3rds ready when my family -sans Butterfly who is in New York -descended for a week's stay and all thoughts of finishing it vanished amidst games of Rummikub, Racing Demon and trips "into the nature" as Czechs will insist on translating "the countryside".   Not to mention some stunning miniature jewellery-making by my daughter-in-law, Laura of Laurart, which will eventually make its appearance on her blog, and then in Gosthwaites of Aberystwyth, and many pots of delicious jam produced by her and my son from the heavy haul of Switzen plums on my seven trees.   These plums are just as good for making slivovice and povidel as jam by the way.....)


Some of you will remember that many moons ago I asked for ideas for House Number Four of the Essex Haul of six houses.   I myself came up with the idea of a school and this led to a huge flight of fantasy from friend and faithful follower Andrea.   It is with some regret (and trepidation, because she keeps a very sharp eye on the doings in Small Worlds) that I have to confess that I have not been able to fulfil her drabble vision......

But I hope you will enjoy what has developed as much as visitors to the museum clearly do.

Two favourite books of mine inspired what has happened to House Number Four.   I can't remember when I first read either of them but since Madeline by Ludwig Bemelmans, was published in 1939 and  Bemelmans was a favourite author of my father's who came from a not-dissimilar background, my guess is that I was given it within the first five years of my life, so about 1947. 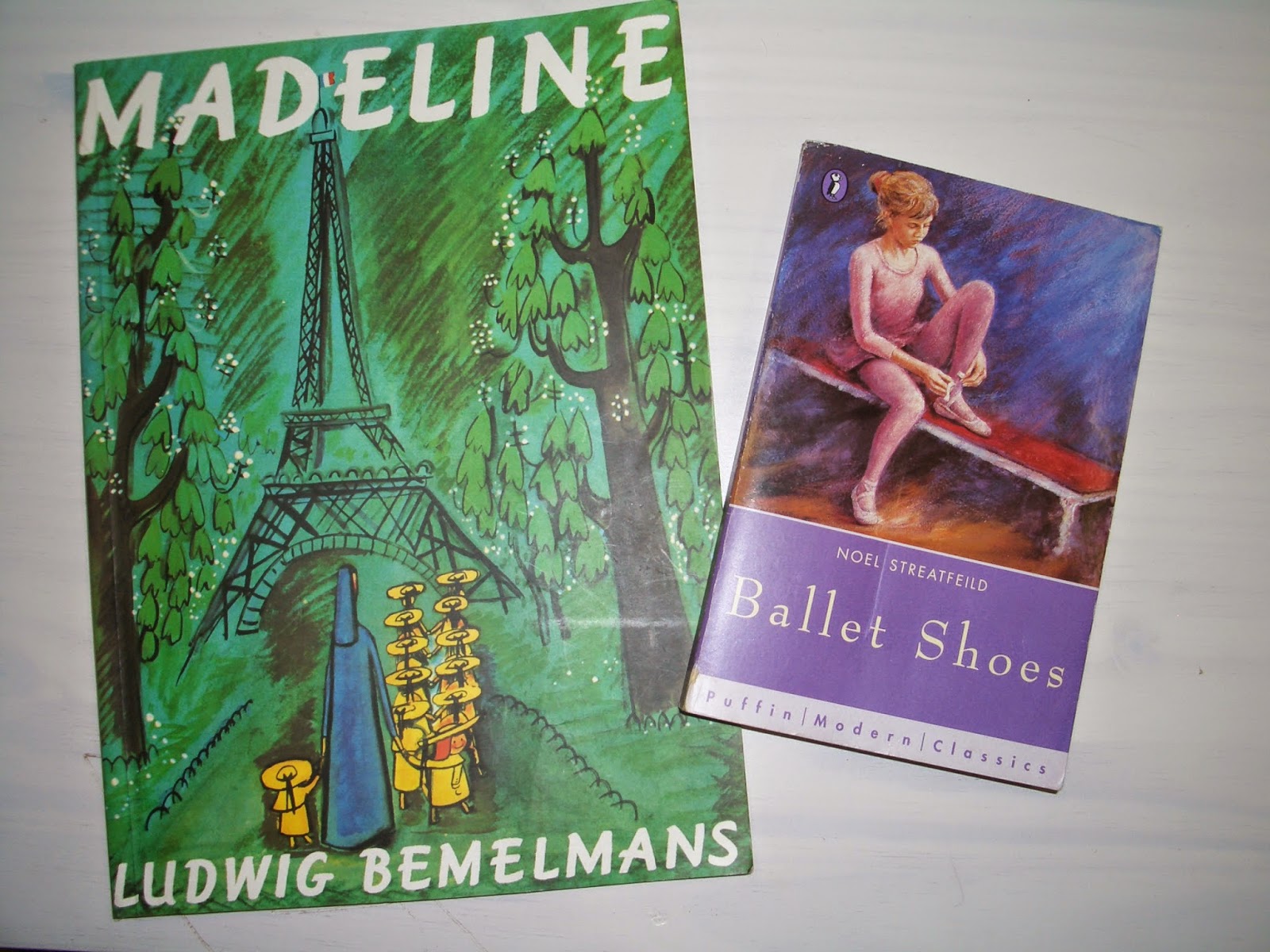 The second book, Ballet Shoes by Noel Streatfeild, was published three years before that and I cannot remember a time when I wasn't familiar with the story of the three orphans, Pauline, Petrova and Posy Fossil, who ended up at the Children's Academy of Dancing and Stage Training owned by the fearsome Madame Fidolia.

Since House Number Four already bore a startling resemblance to the Old House in Paris, and with Andrea's drabble at the back of my mind, the decision about what to do with it came almost perfectly formed.

I actually started working on the house not long after we arrived back in the Czech Republic at the end of April - whilst Butterfly was tackling the Tudor Inn and the "Diva Dum" in fact.   (She works a good deal faster than I do......). 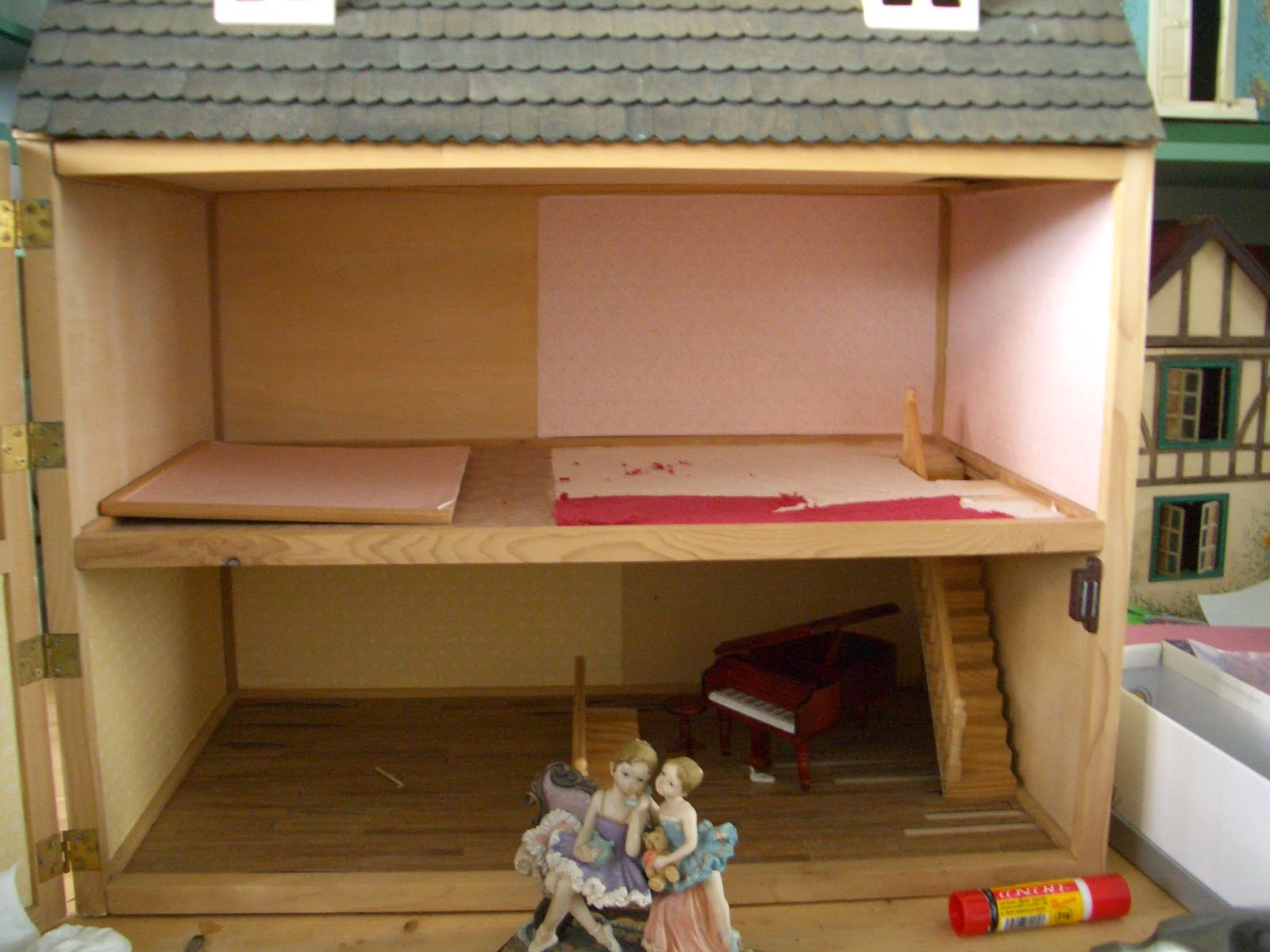 The outside was plain cream, very boring, 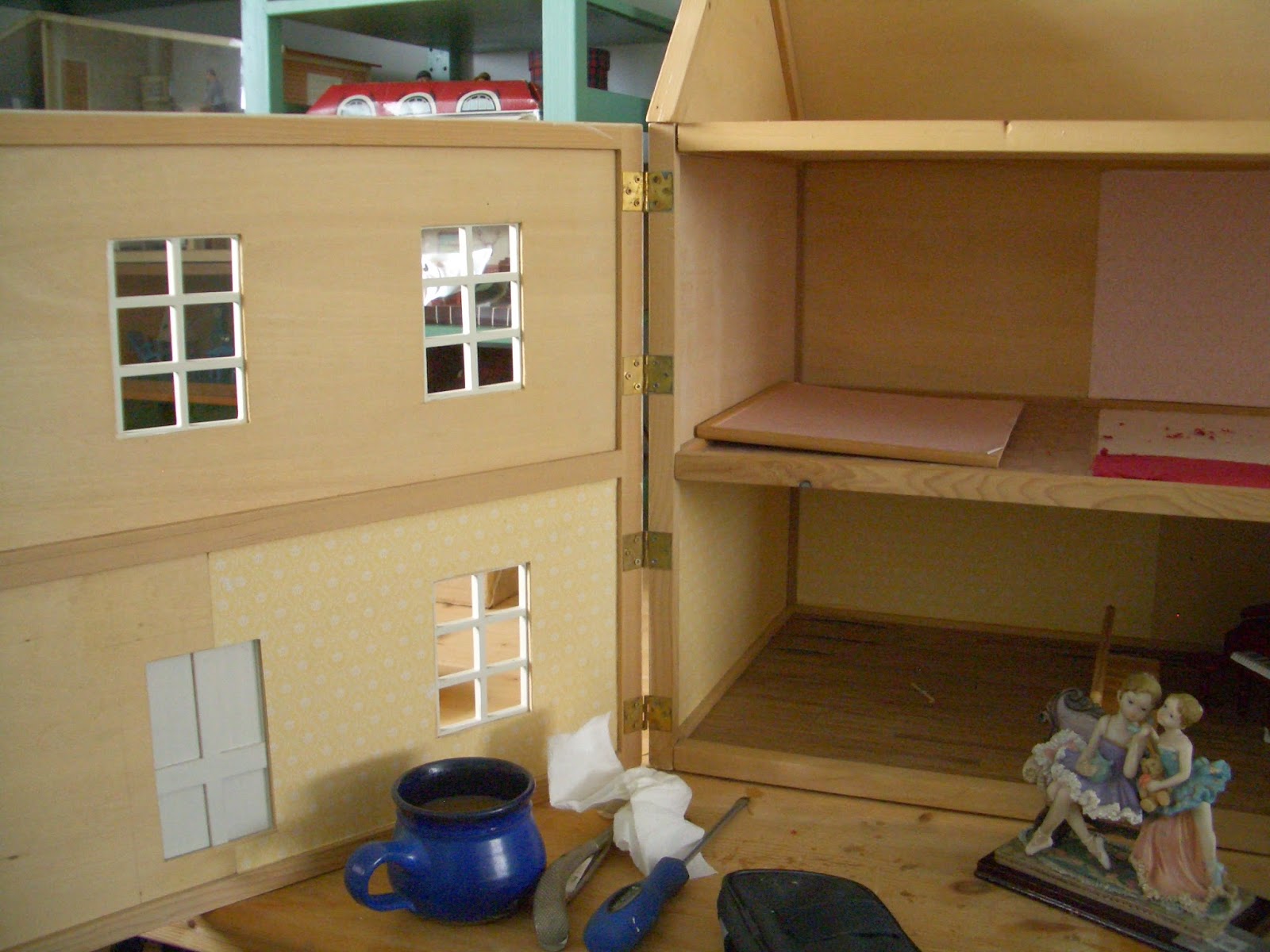 One of my least favourite jobs is scraping off bits of stuck-down carpet, but at least this one was not moth-eaten as was the one in my Lundby house which I had to tackle last year.... 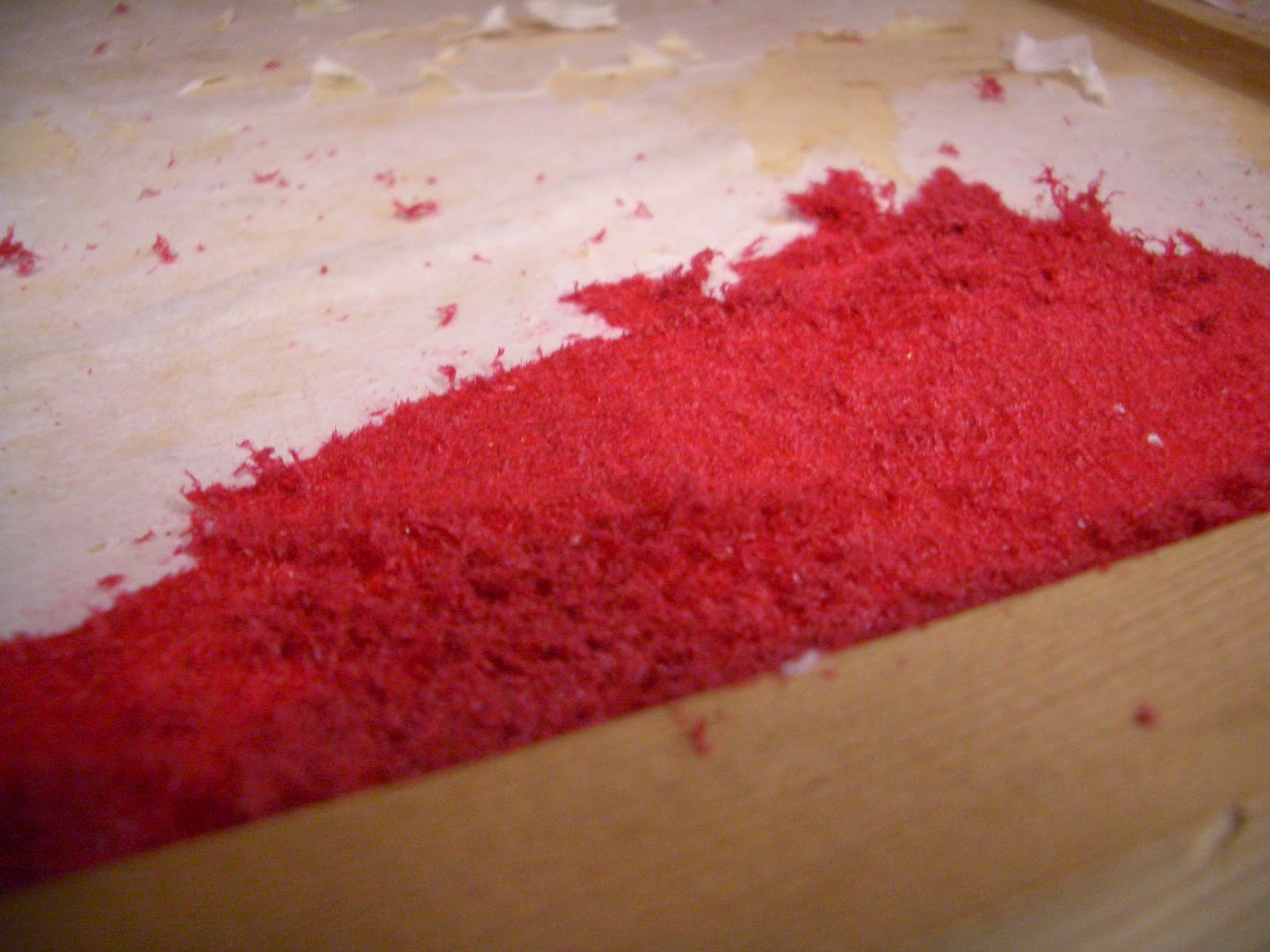 The wooden flooring, which I wanted to keep in the downstairs studio, was very patchy so I spent some time cutting little pieces of wood to fill the gaps, and sticking down the rest so that the young ballerinas would not trip and hurt themselves 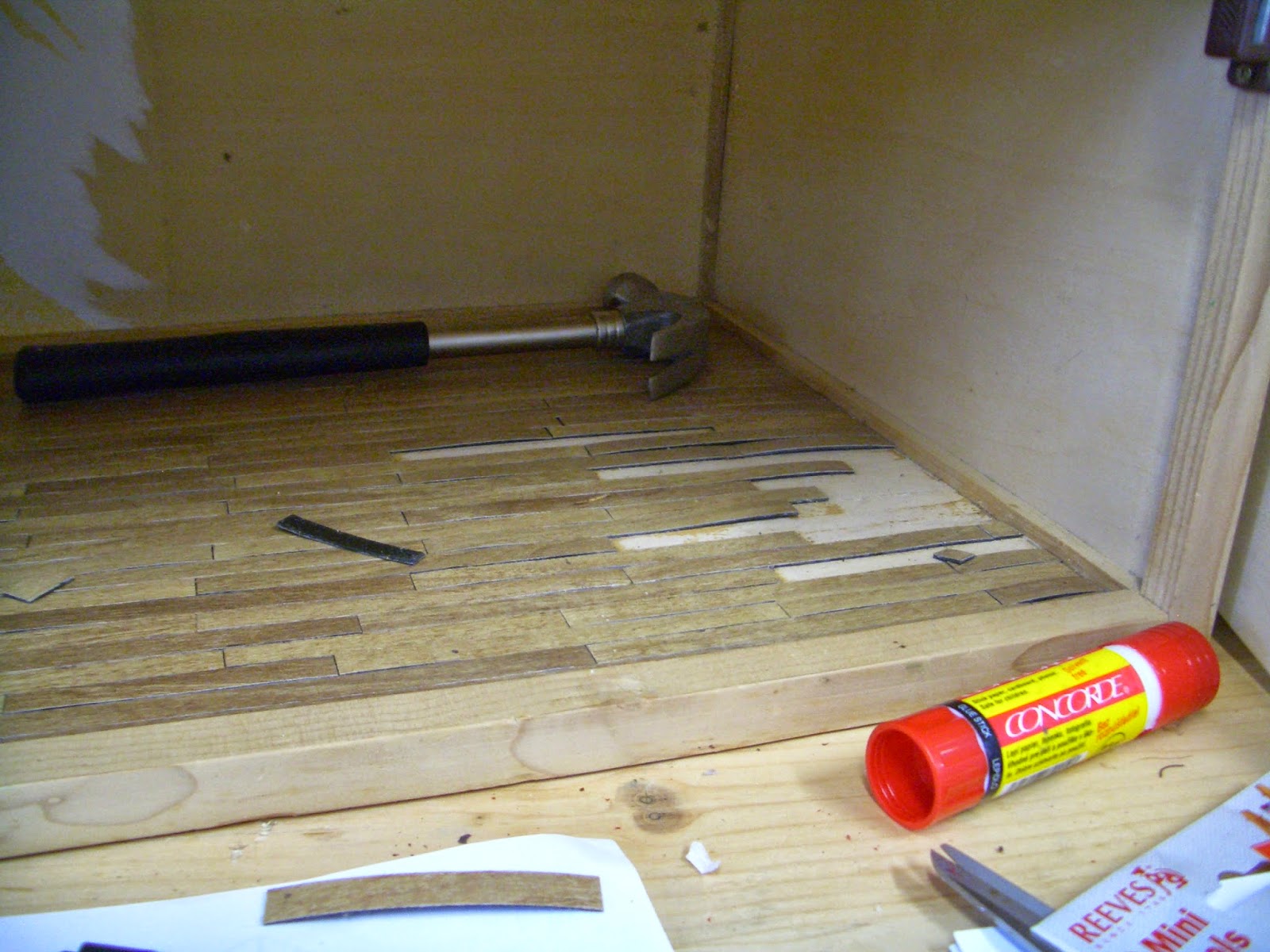 I stripped off most of the wallpaper and considered what the other rooms should be.   I settled on a dormitory in the roof space, and a study for Madame Fidolia plus a classroom on the first floor.

Fortunately this house has a working staircase to both floors - I hadn't realised until this summer how important this is to small boys.   They almost without fail check whether a house has stairs to all the floors - something sadly lacking in many dolls houses.   This causes them great dissatisfaction whereas it doesn't seem to bother the little girls nearly as much. 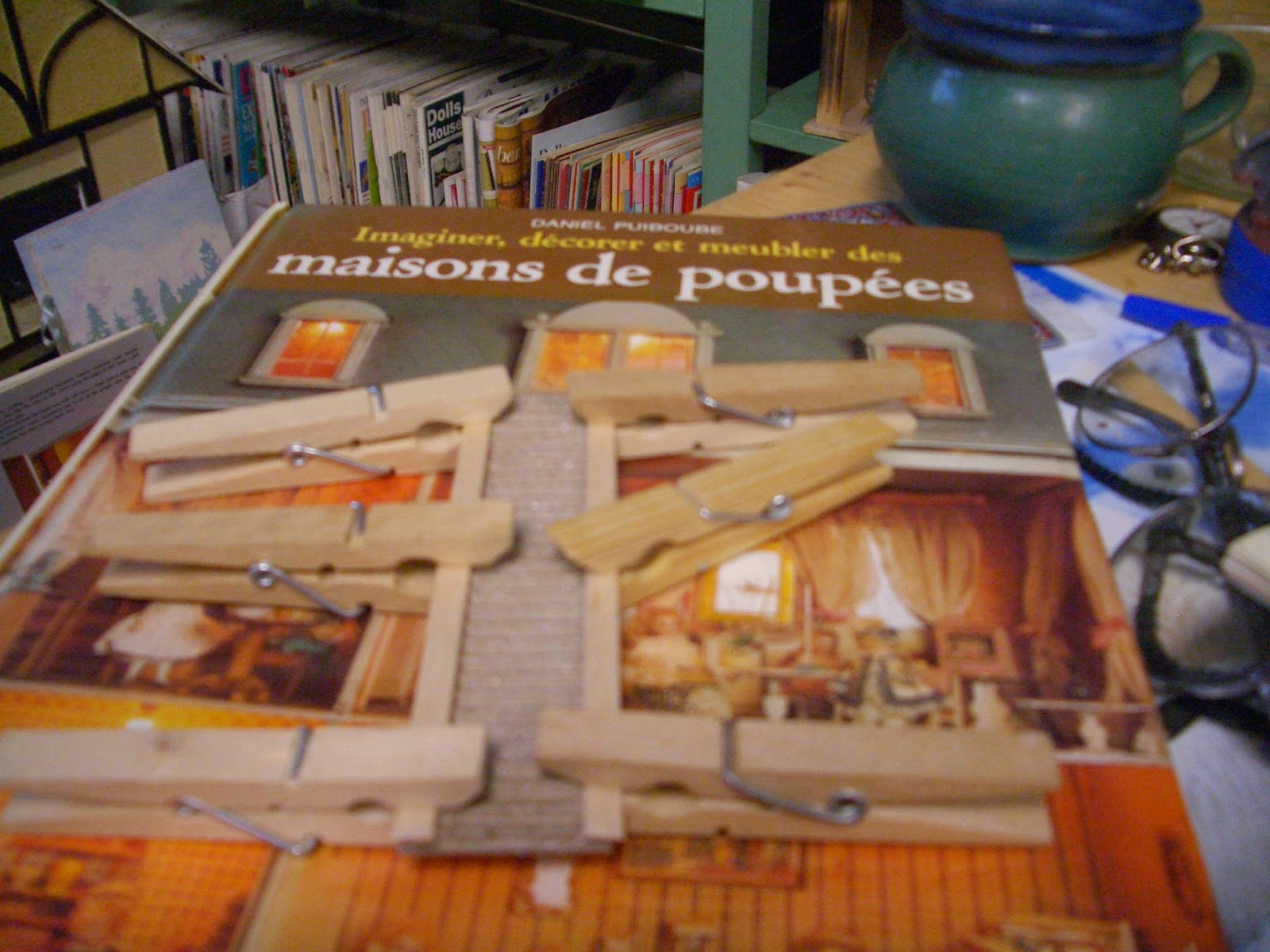 This staircase is helpfully removable so that one can easily get at all the walls meaning that stripping and repapering went quite quickly.   But that Old House in Paris still seemed to be lacking something on the outside.   Although the Madeline one has no shutters I was inspired to add some by a feature in a French dolls house book. Butterfly showed me how to make them out of corrugated card, one of her favourite materials.... 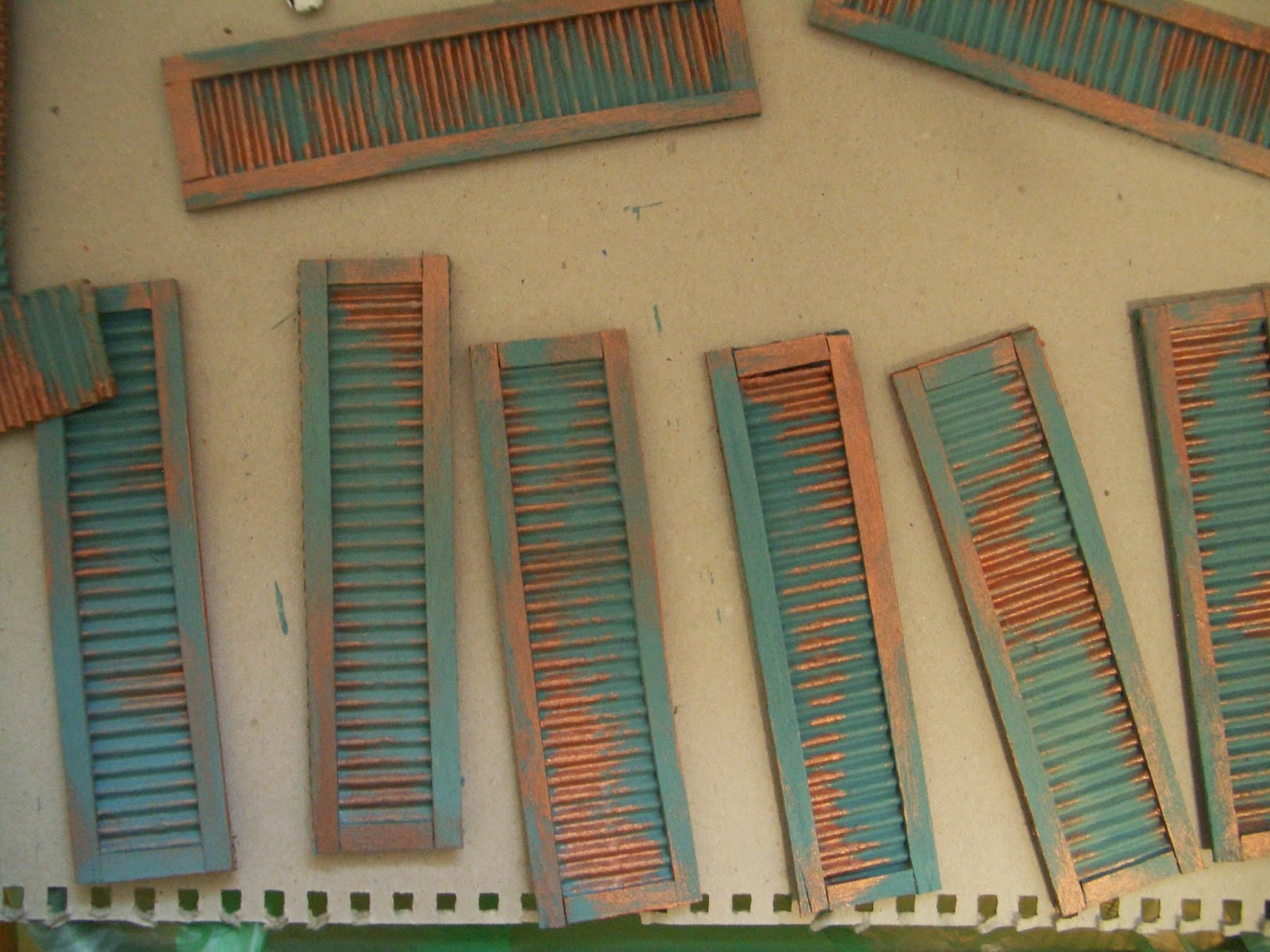 ....and then she worked her colour magic on them (for details of how she achieved the final weathered look take a peek at her Gallimaufry post).


The outside also benefited from her skills with a hot glue gun (the trails of hot glue were rushed to the Diva Dum to form cobwebs in the attic....) and vines grew up the outside of the Old House.   (Apparently it is not possible to comfortably translate this genus of vine into Czech which has resulted in the Czech label calling it ivy. And of course some visitor has noticed the discrepancy!) 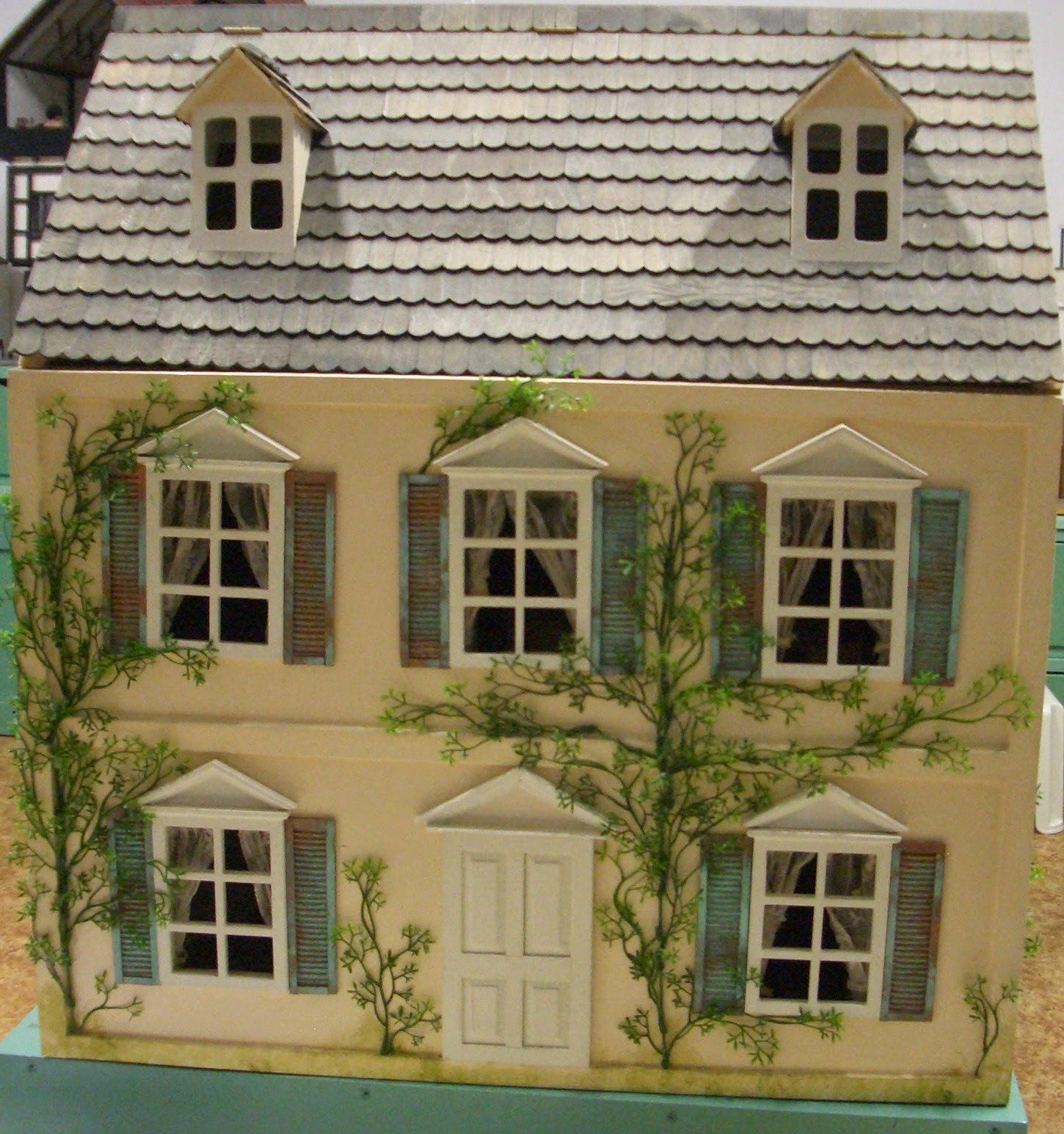 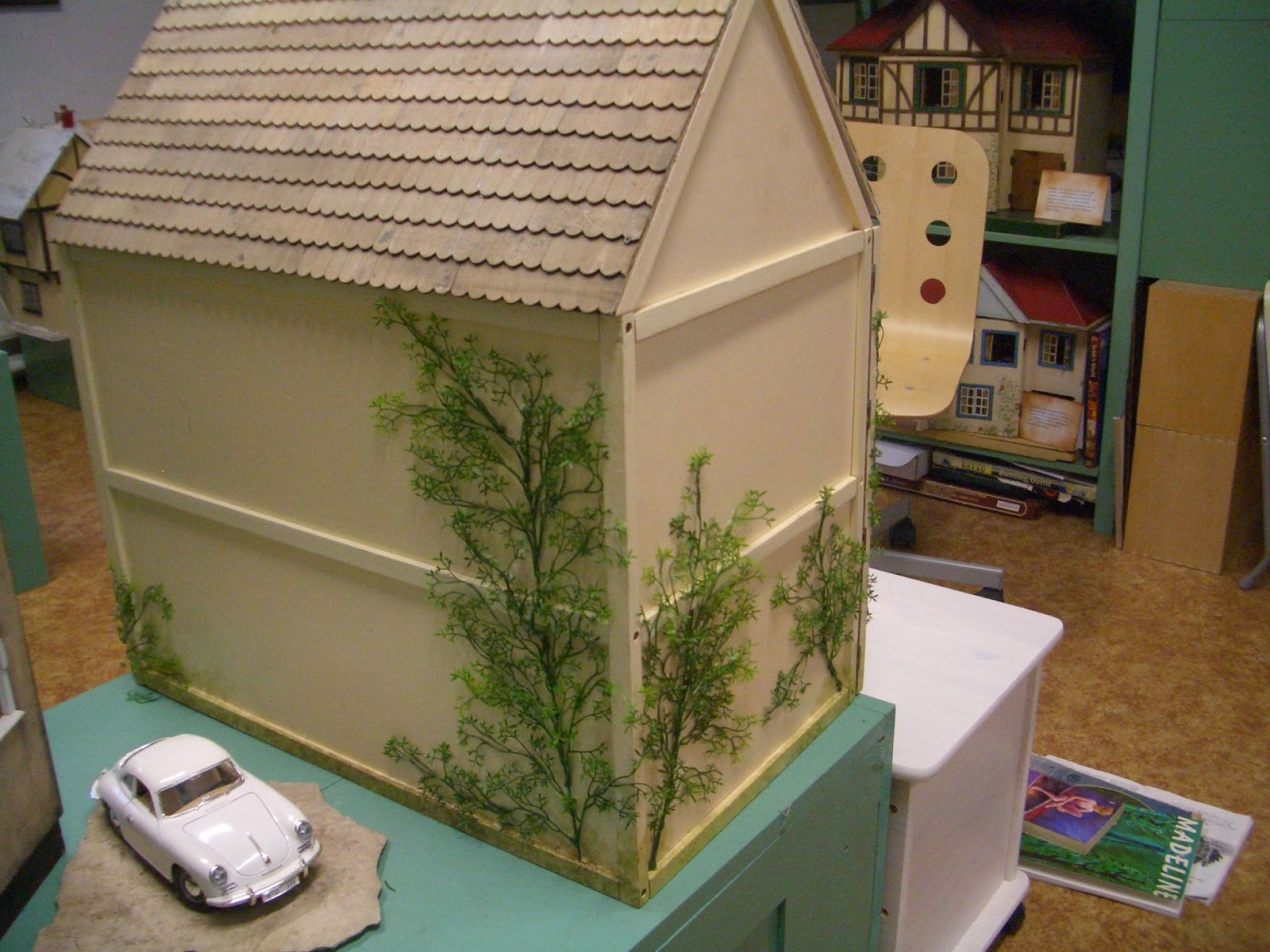 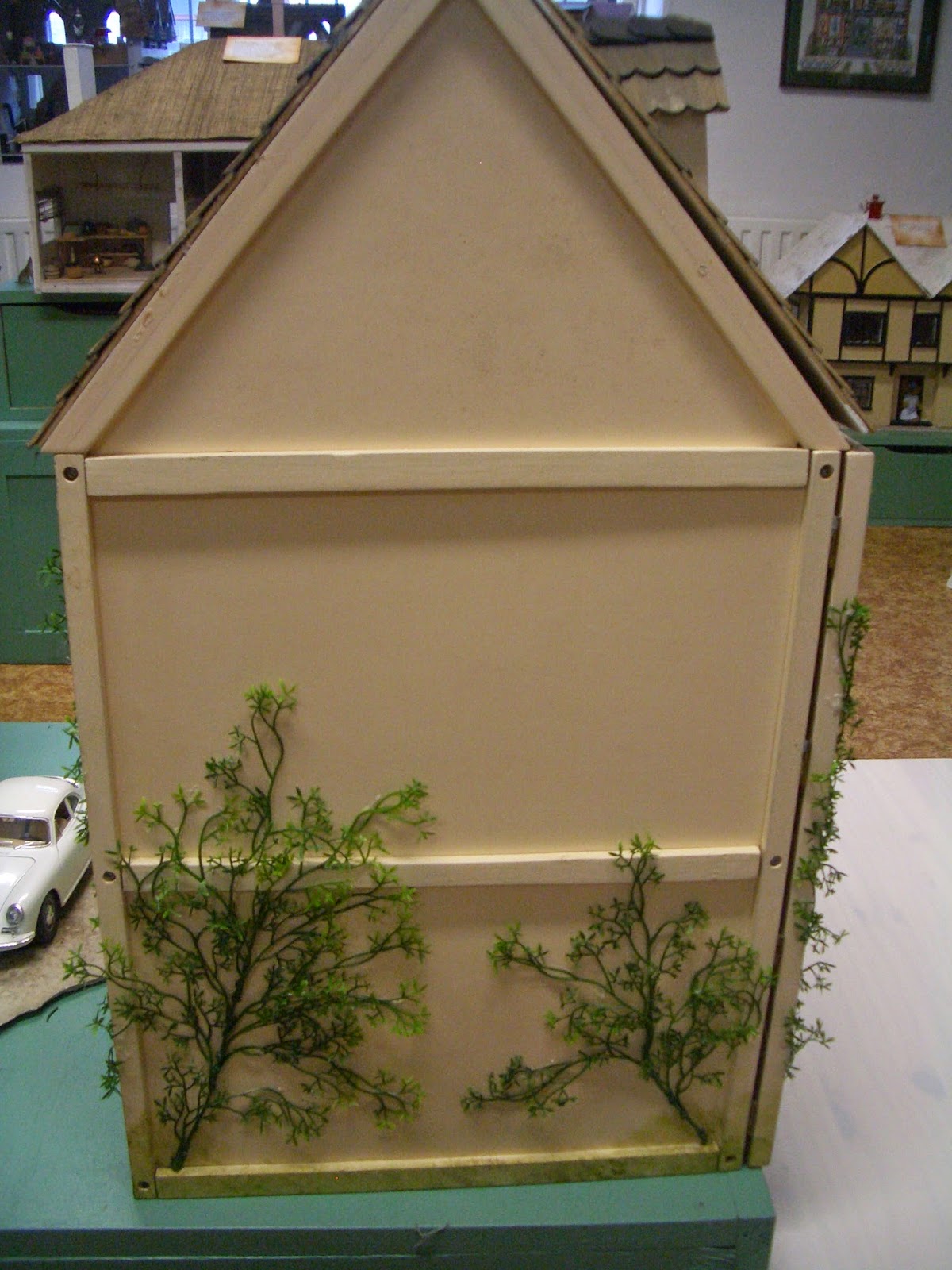 Butterfly, never one to do things easily, also covered the sides and back with said vine/ivy. Given that the house is in Paris, the car should be a vintage Citroen, which I am still hunting for......


I have just reviewed the photos of all the inside work and am quailing slightly at how much more there is to show and tell you.   So I am taking the cowardly way out and making you wait a little longer for the internal reveal - I should really be in Small Worlds by now anyway rather than sitting comfortably by my laptop.   I will post Chapter One now and then peacefully put Chapter Two together over the weekend - so watch this space!

Thank you for following thus far.....