...so little time to do it.   In fact it is not just a matter of time, but energy.   Each day I leave home saying to myself "Tonight I will write a blogpost".   Each evening I return and the last thing I want to do is think about Small Worlds, much as I enjoy my time there.

So today is an experiment;  I have brought my laptop to Small Worlds, where I cannot connect to the internet, so am not in danger of being distracted.   I am hoping for few visitors so that I can actually get on with some writing.   Yesterday was bedlam here – around 30 people to show round, almost too many for my legs to be happy with since I try to accompany as many as possible around the houses.   However today is very quiet and since the skies have just opened, I think most people will stay indoors rather than risk a drenching.

There has been much activity recently, so much in fact that I don't quite know where to start.   I realise the Old House in Paris has not yet appeared – it is now almost complete and will be with you soon, I promise.   But in the meantime Small Worlds has been receiving ever more wonderful presents – ah I forgot that you don't yet know about the inhabitants of the Old House, do you?  Other than a peep at some toes in the last photo of the previous post.

You will perhaps remember Butterfly's work on the department store lift? 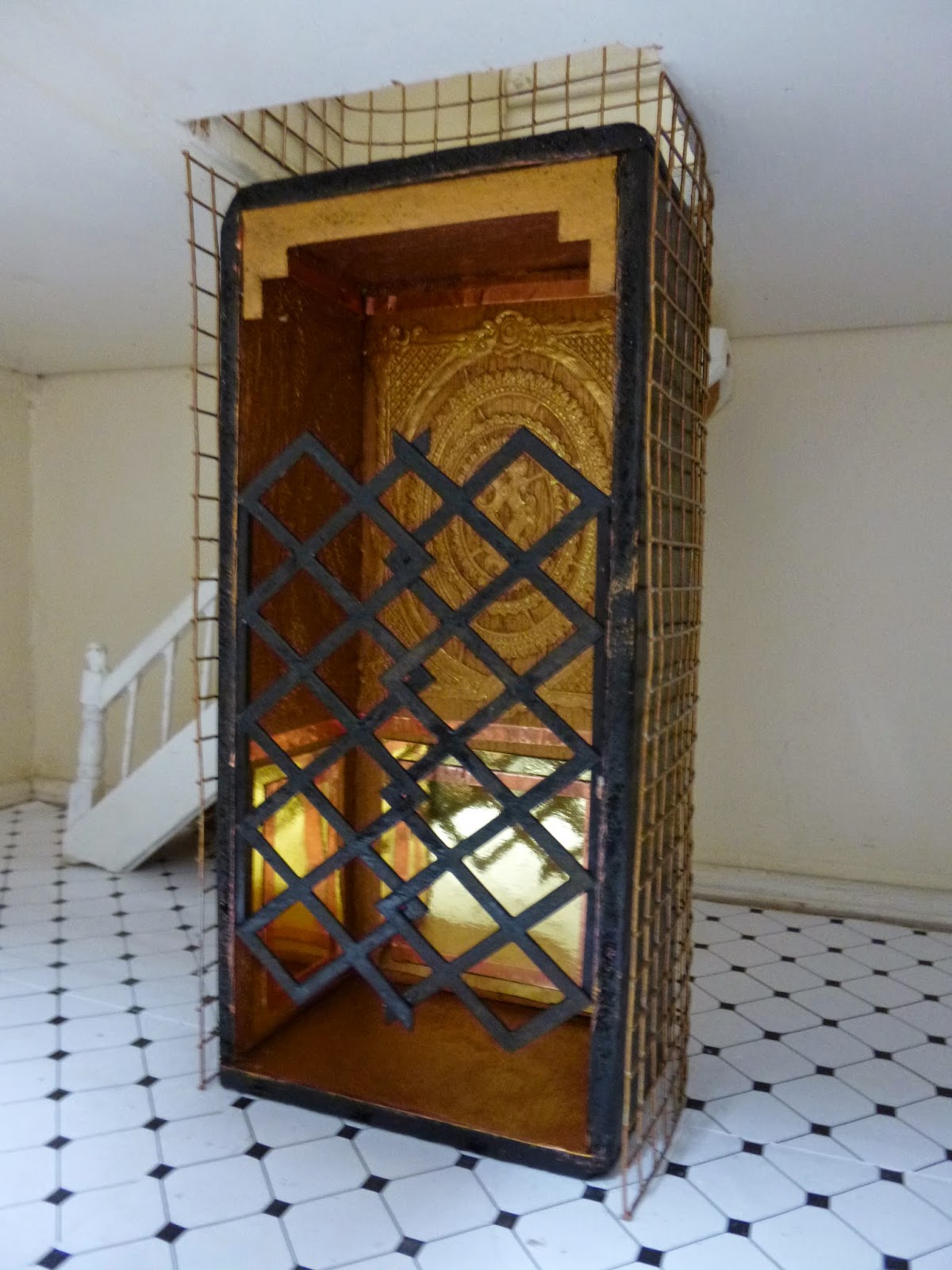 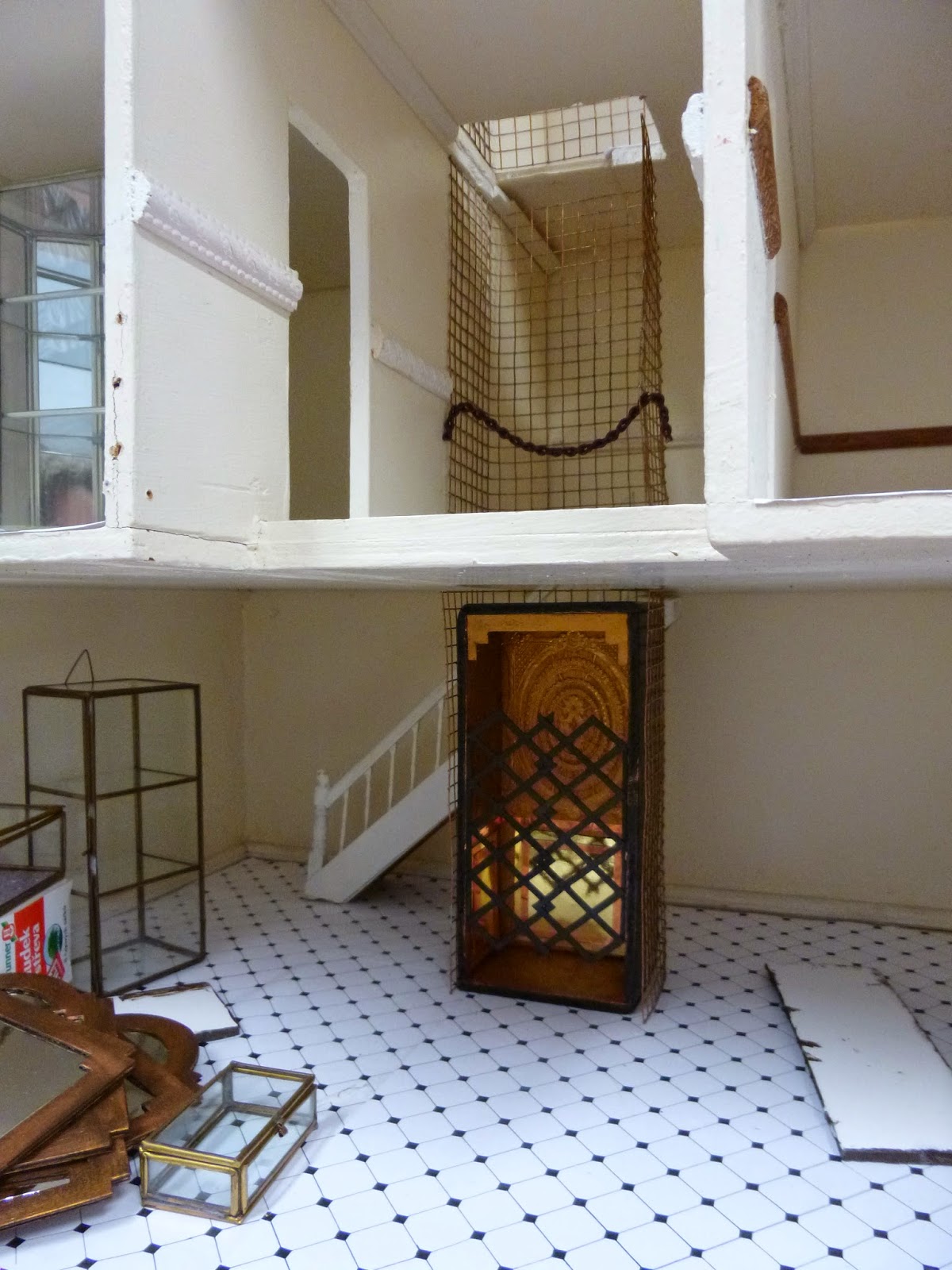 I am busy now making counters and other display units via a cunning plan involving soup, teabag and match boxes plus some wood veneer which I was given in vast quantities last year by someone in the village. 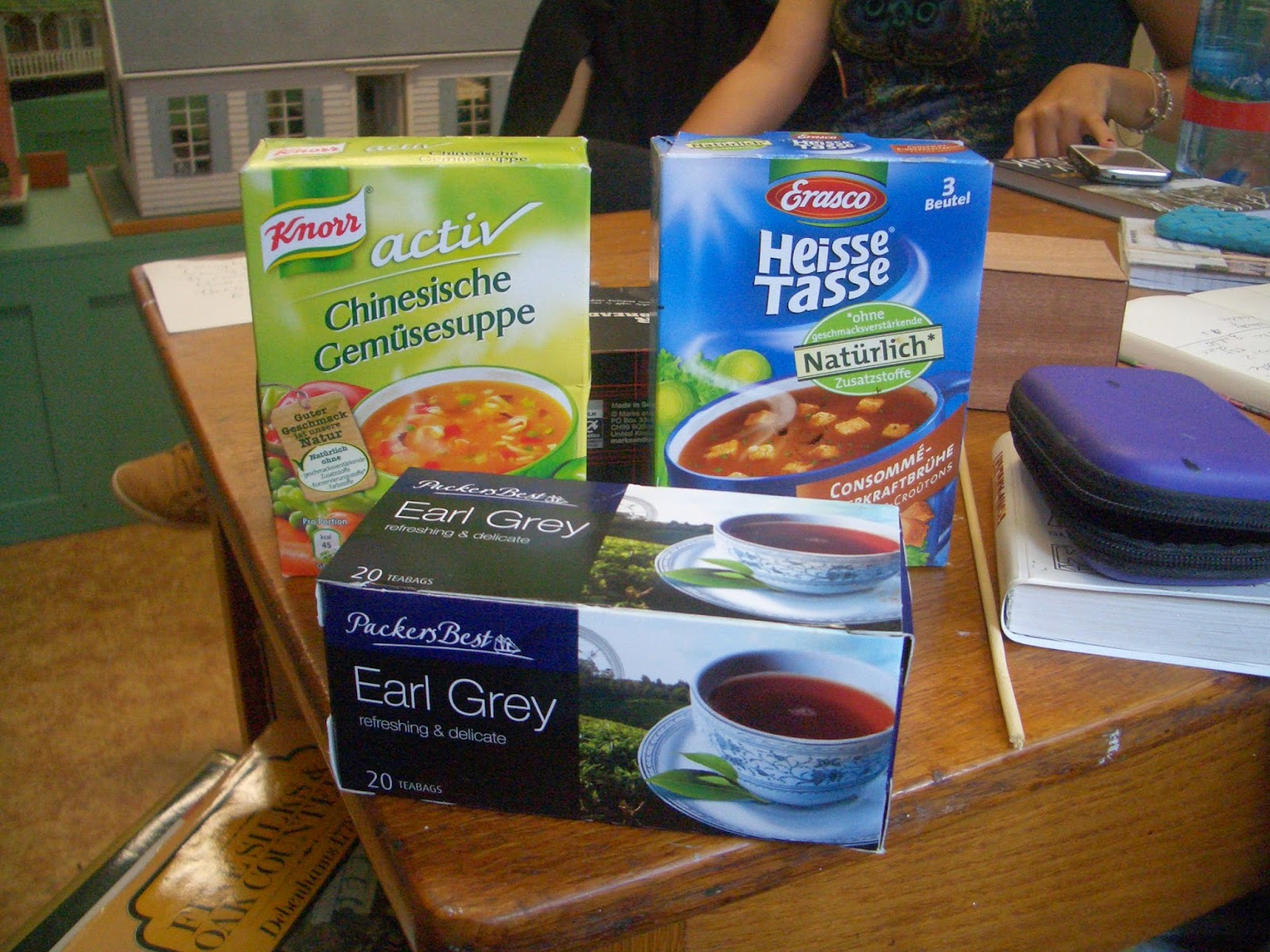 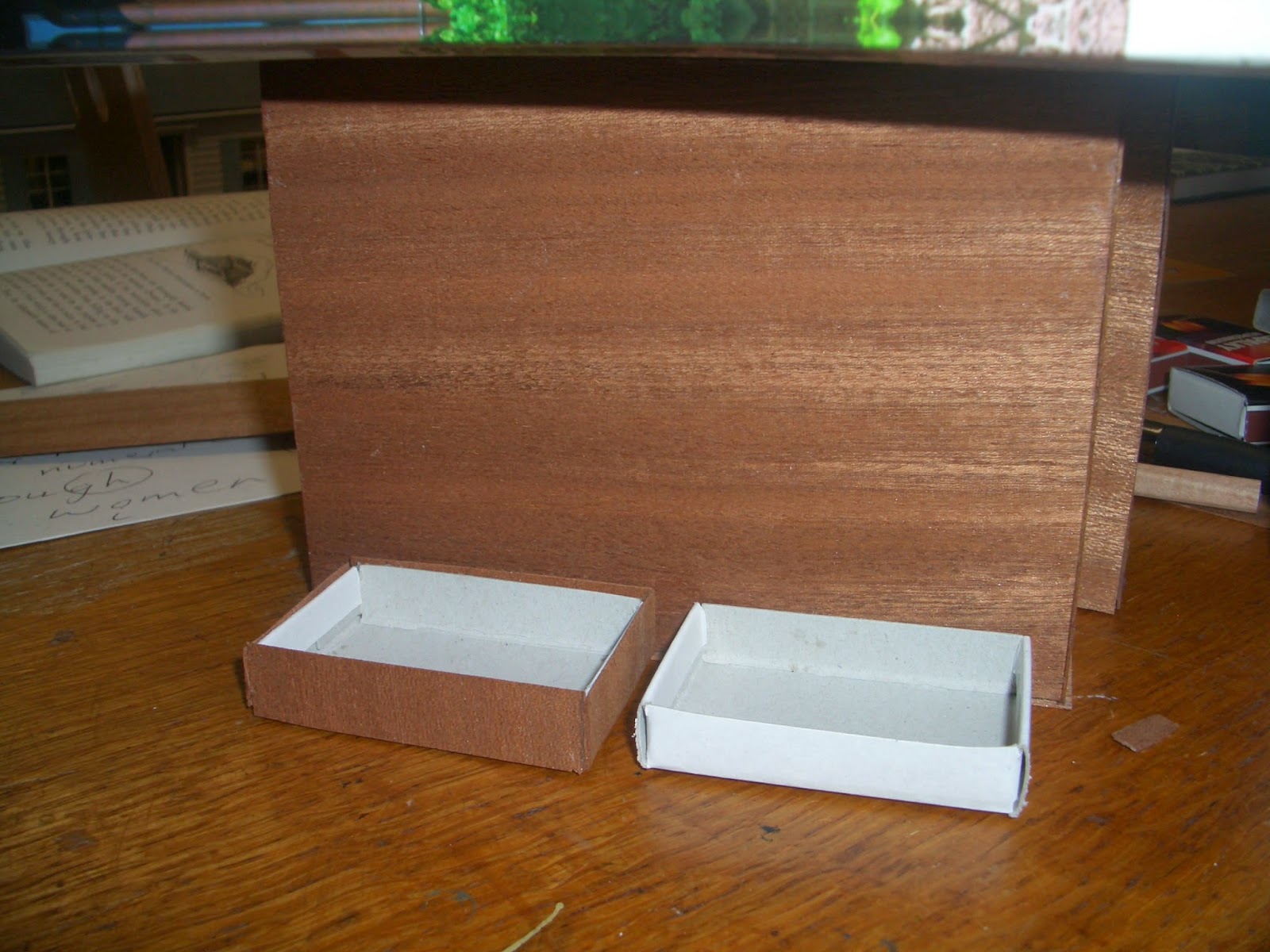 The Grand Opening of Gosthwaites of  Aberystwyth (a name truly designed to tickle the Czech tongue) is planned for the end of August so I am also sourcing goods for the many departments. 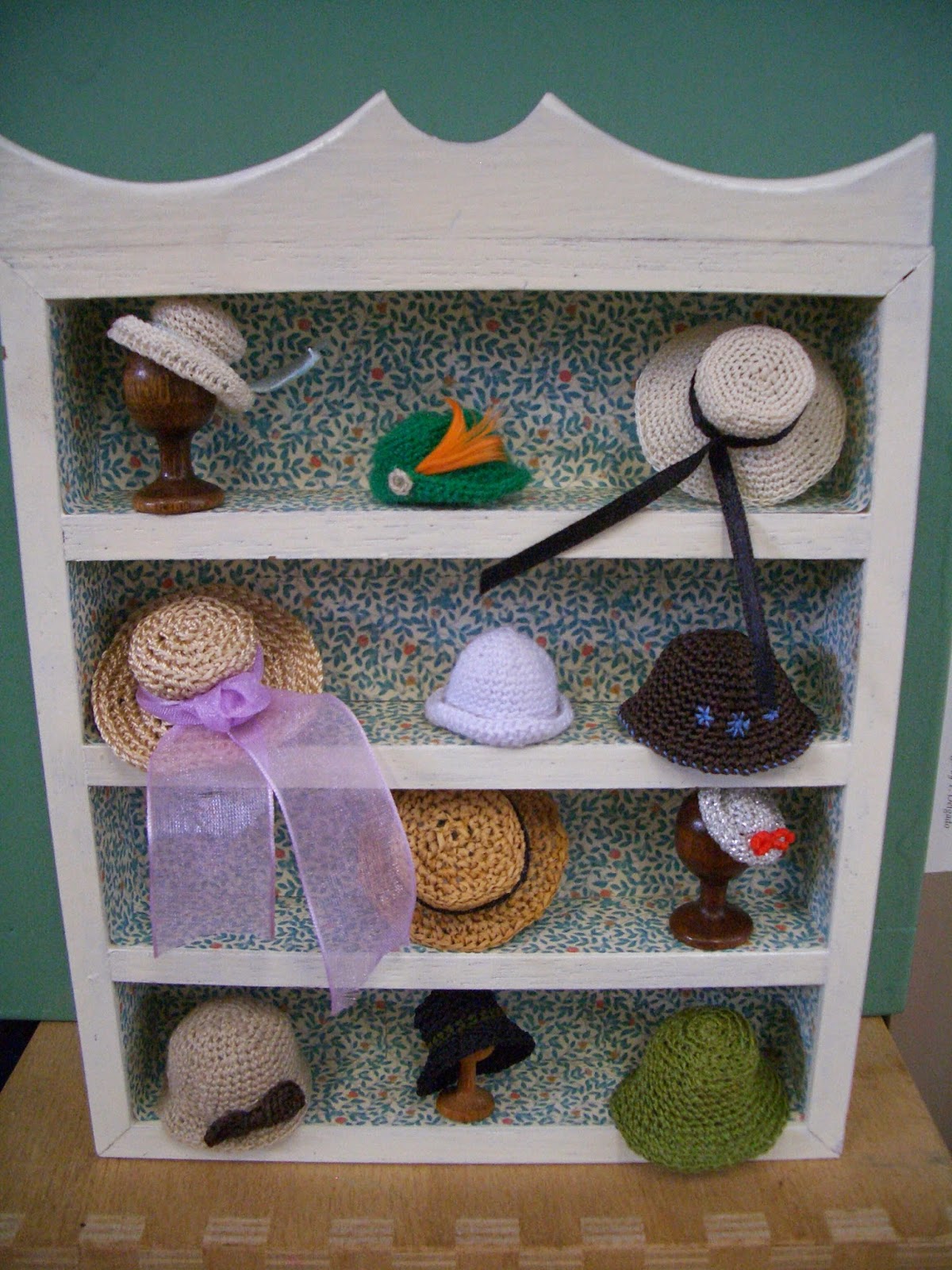 A Czech friend was here last weekend – I have christened her Milena the Milliner. 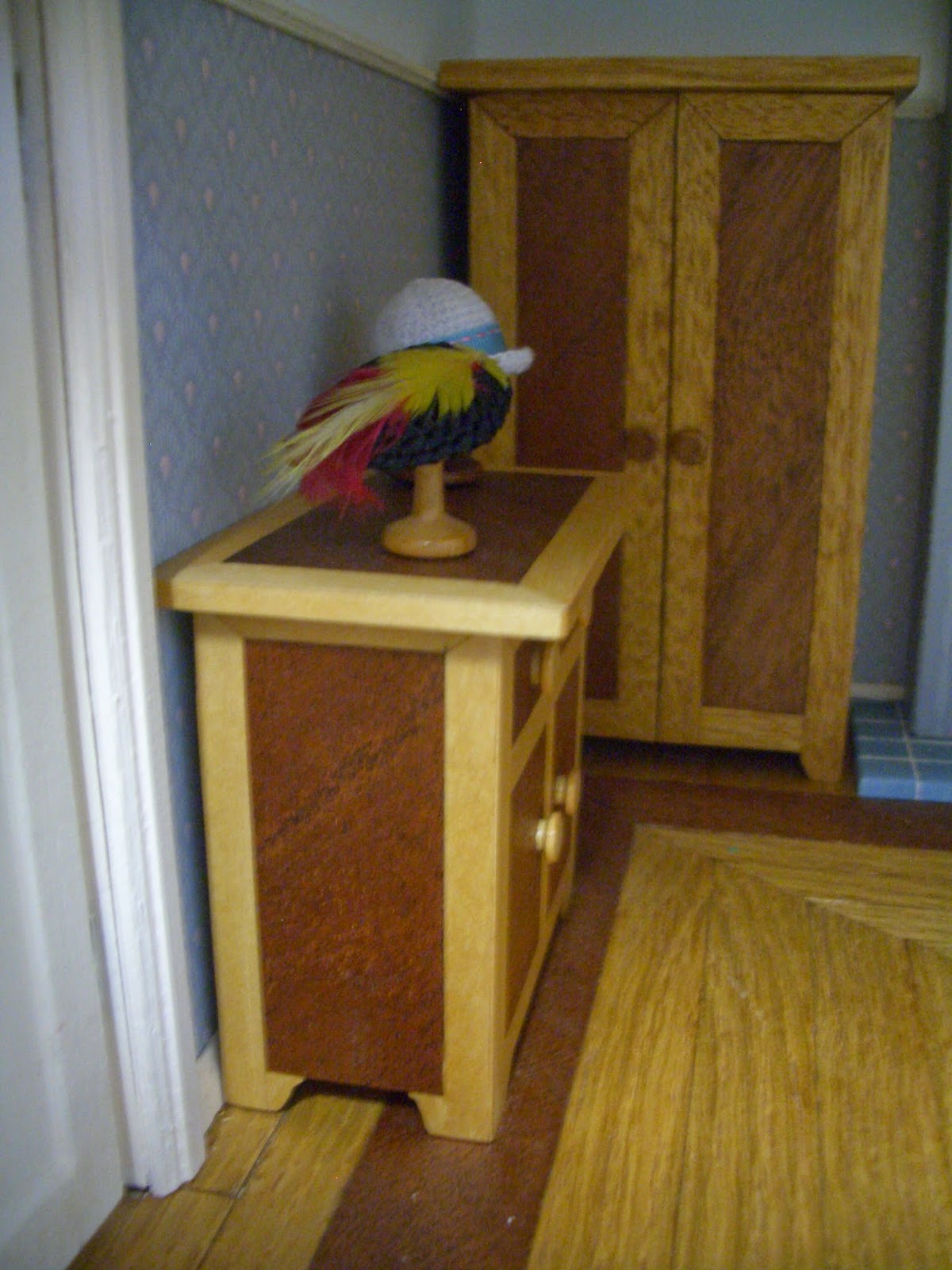 She makes beautiful hats for real people, as you can see here, and when I suggested last year that she could have a go at mini-millinery she proved to be just as skilled at that... 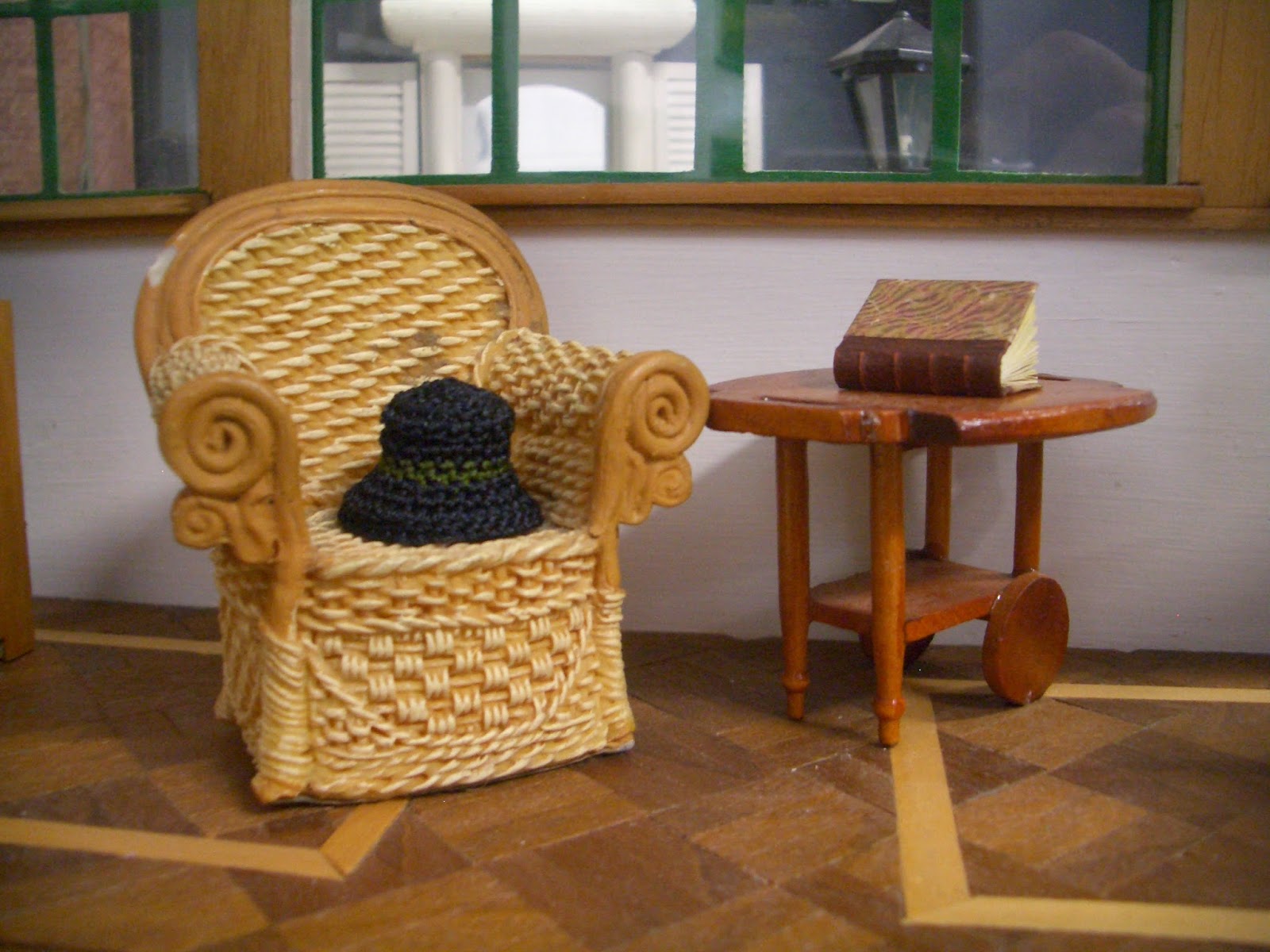 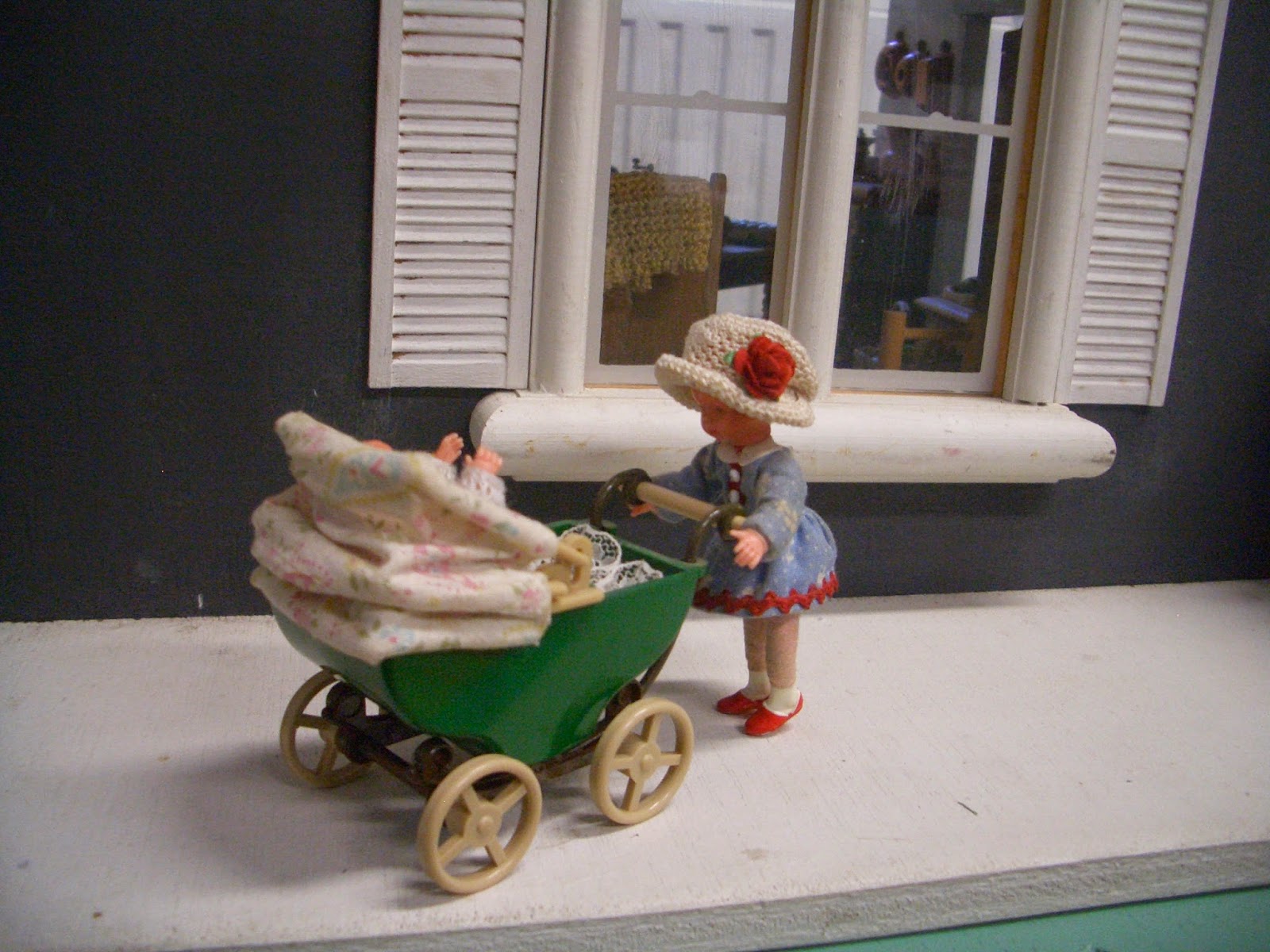 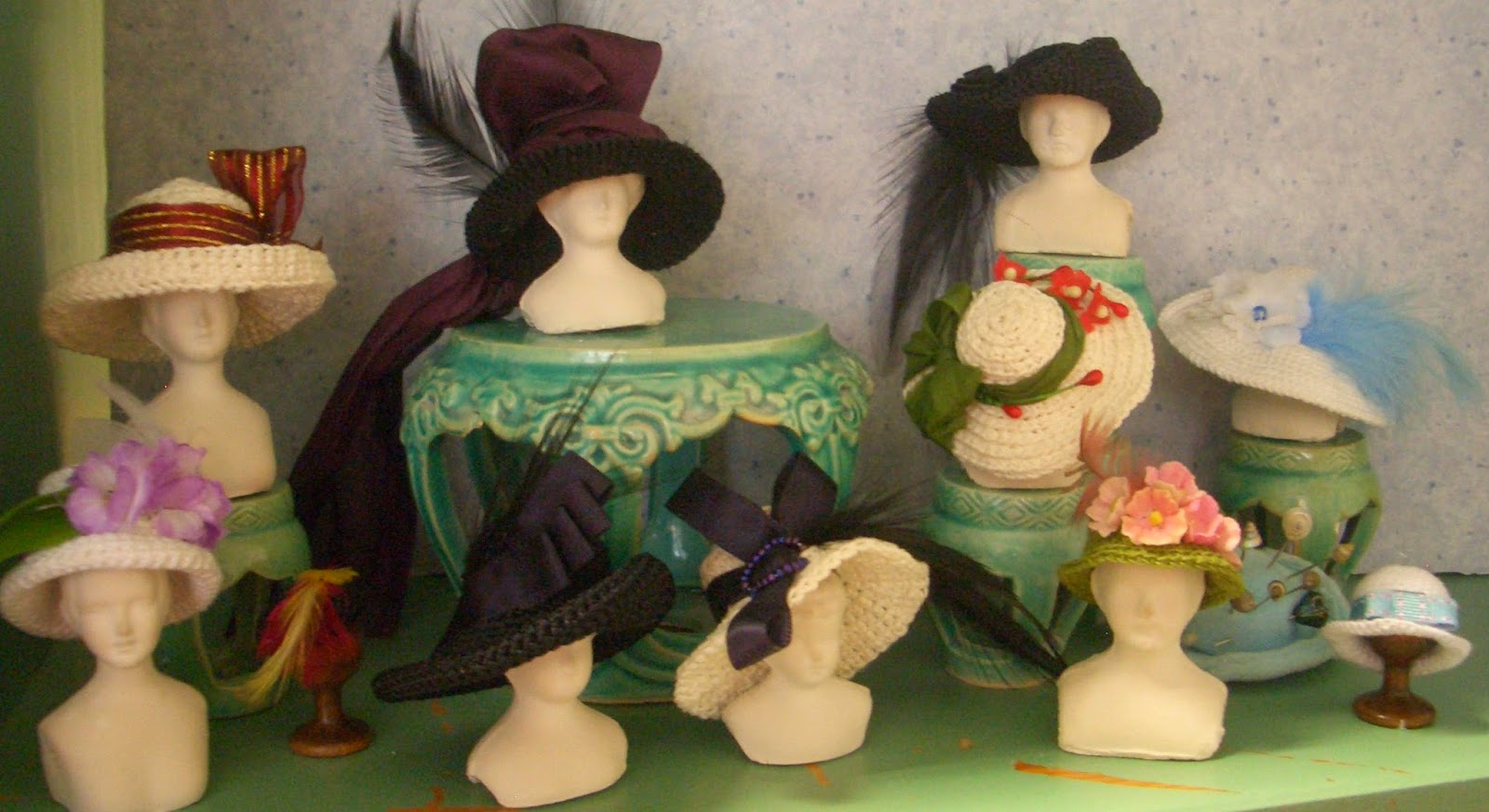 She spent the weekend as her very own production line, ably assisted by another friend, Jana, and the result was a glorious collection of hats for the 1914 store, including some for the mourning department.... 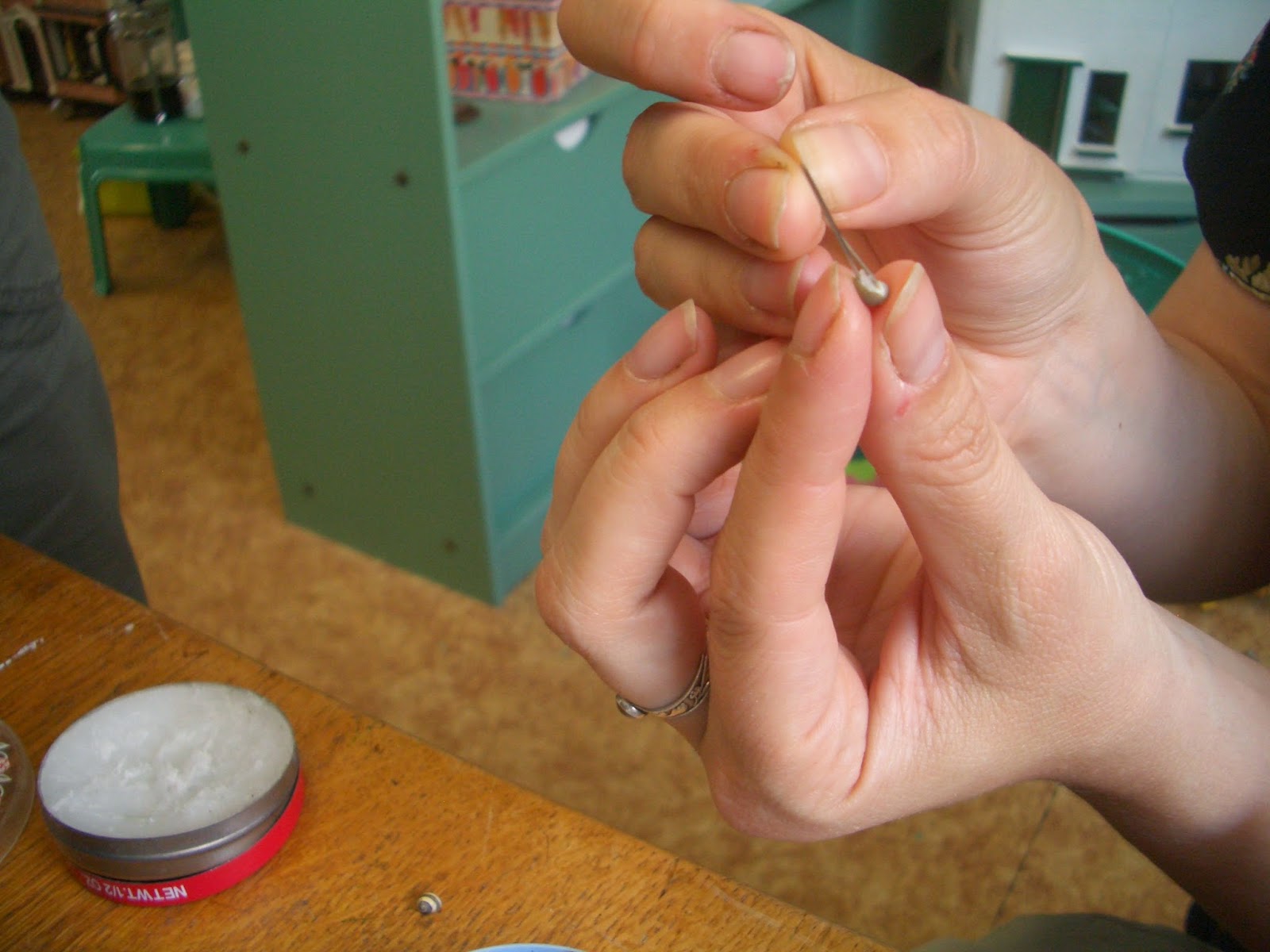 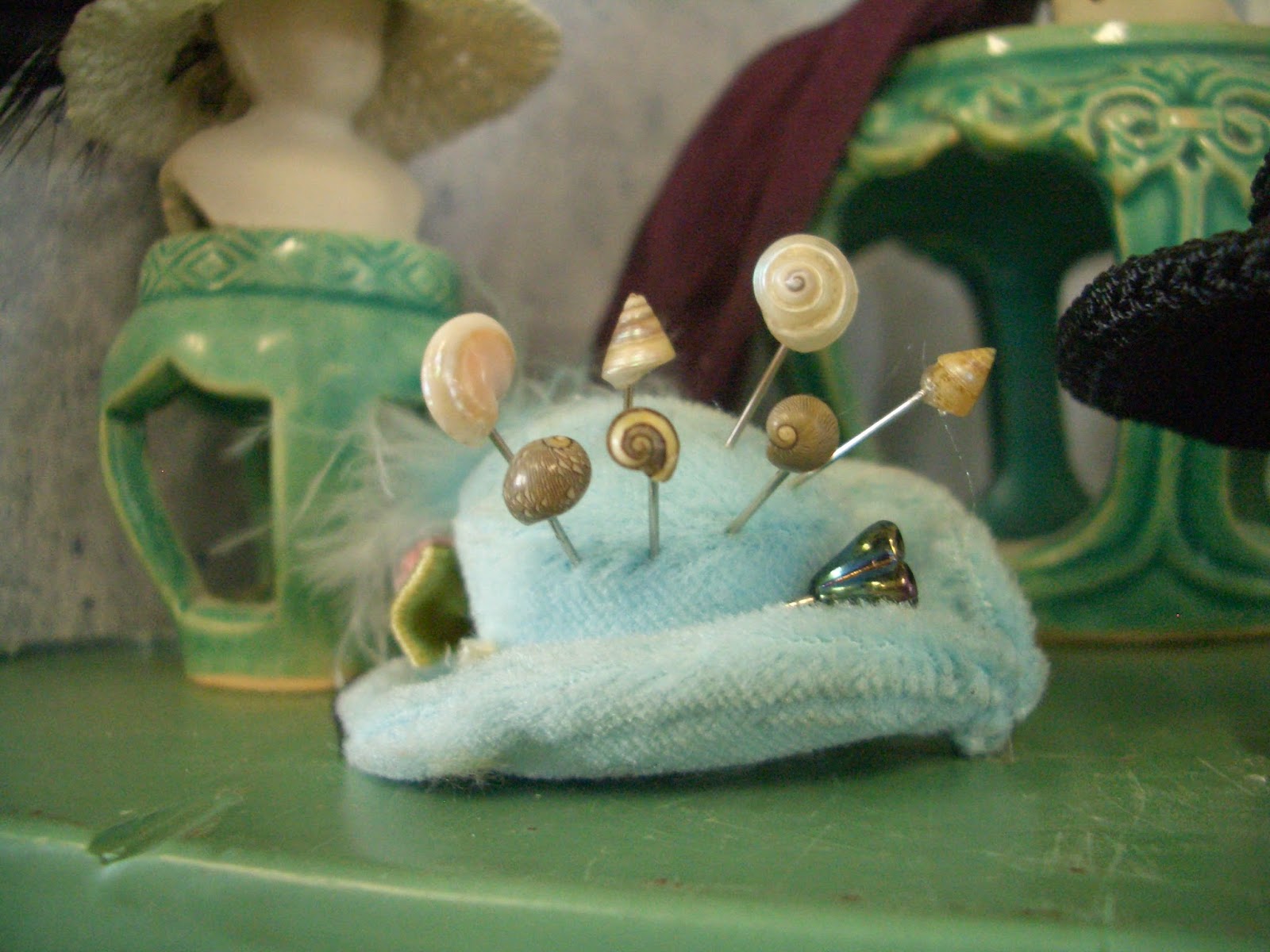 And not content with that, they also created some hatpins, a necessary adjunct to the hats of those days which often had to perch on the most improbable hairstyles .

Another donor, Anna Šlesingerová – her gifts will be revealed in the Old House in Paris – last year gave me some disembodied heads, arms and legs and it suddenly occurred to me that the heads would make fine stands for Milena's hats, and so they do....

Cue lengthy digression: I clearly shouldn't have said what I did about the weather. Far from keeping them away, a flock of people suddenly descended to take refuge from the deluge.   Once again I blessed the Children's Corner which allowed two very interested young mothers to enjoy themselves thoroughly.  Their visit was another example of the wonderful behaviour of small children here – and their mothers.  Before they took themselves off to the Children's Corner, these very small beings were walking round – two of them around 2 years old, if that, plus two slightly older ones - doing exactly as they were told.   Not touching, looking just with their eyes.   And much praise to the mothers who are constantly reminding them and watching out what is happening.   I fear it wouldn't work quite like that in England, or indeed many other countries.

They were still here when some more people arrived, closely followed by a very large group indeed.   It's interesting to see how differently I operate when there are many people – twenty years as a Citizens Advice Bureau manager, with eyes and ears open to what is happening on the phones, responding to an adviser needing help, talking at more or less the same time to the Benefits Agency or some such authority, and listening to whatever is going on in the General Office, has more than paid off when needing to notice which house needs opening, which people at the far side of the room are ready for a guessing game about what something is made of, or who by the door is burning to ask a question....

After that group arrived, I more or less lost count!   I have decided however that I am an unashamed opportunist.   I bought a new mobile this week and, as has been the case with every mobile I have ever owned, I could not get the back off to insert the battery for love or money.   I thought it likely that a young couple would appear at some point in the day so I brought the whole box with me.   Sure enough, the giant group contained both computer experts and a young man. They loved Small Worlds, were here for a long time, and so I felt able to ask for help.   A committee convened to try and open the phone.  In the end it was one of the older females in the group who guided the operation and I finished up with both SIM cards installed and a functioning phone - huzza!

More opportunism a bit later when a young mother with three children was clearly interested in all the clothed dolls, and also the hats.   It turns out that she is a dressmaker and completely fascinated by the tiny dresses.   So I half-jokingly asked if she would like to have a go at something for the Ladieswear Department of Gosthwaites?  The result is that she has gone off with a supply of lovely silks, some measurements (tricky for me in centimetres) and a mannequin model to see what she can come up with.   She will be back next week with the results and to pick up a book on miniature dressmaking which I had annoyingly left at home.  But who knew...?

Whilst all that was going on it emerged during a discussion with another family that the little girl's dollshouse at home was wallpaperless.   I at once hauled out the giant canvas barrel of wallpaper (truly a stash beyond life expectancy) and invited them to take their pick.  They spent a happy time choosing papers and flooring for the house, which is currently peopled with guess who? Yes indeed, Sylvanian families. Much like home in fact.  I rather think that the mother may end up with a dolls house of her very own one day.   Her story is not unlike mine – a search for a house for her daughter, and great delight in playing herself with the one she found.   I warned her of the consequences!

Dead on closing time a sole man appeared, hugely delighted by what he found.   Some of the flyers I have been leaving in various attractions around the area are clearly bearing fruit..... 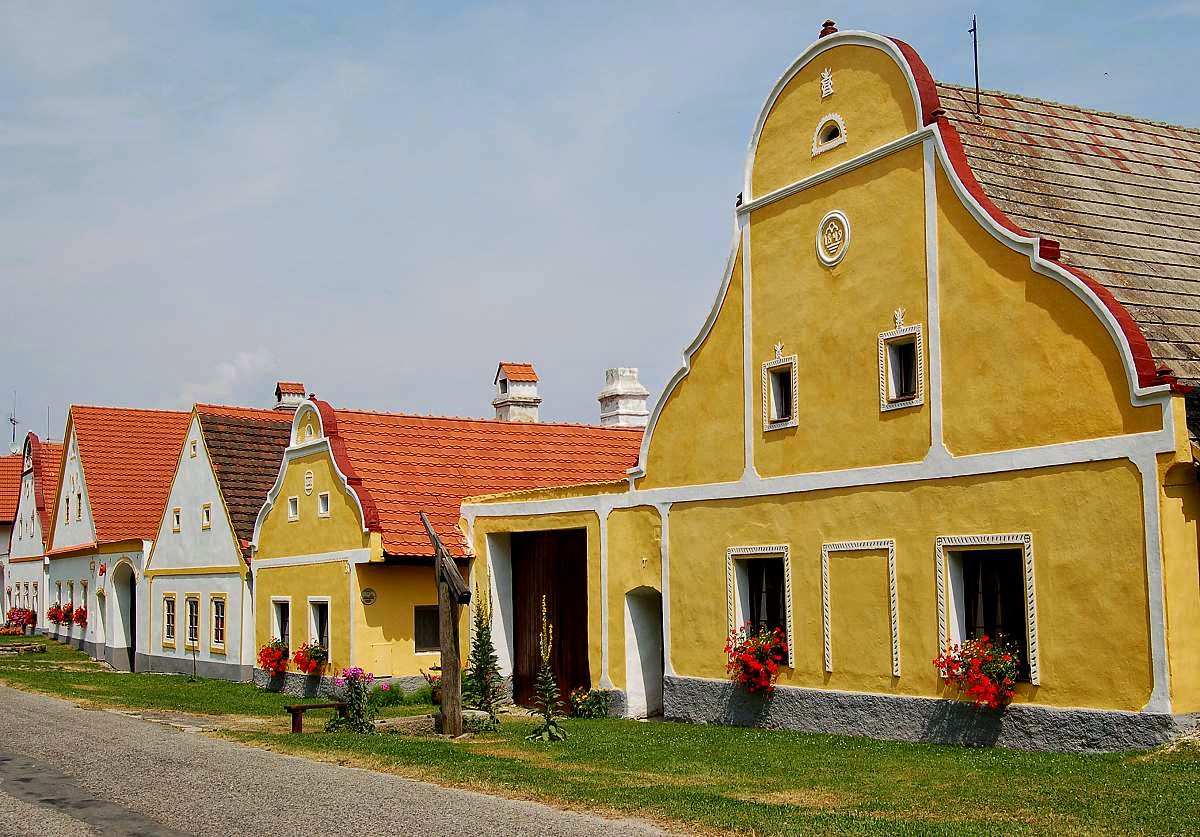 To return to the gifts to Small Worlds....last year Colin Rose who lives, like me, part of the year over here and part in the UK, said he thought that one thing lacking in Small Worlds was some local architecture, namely a typical Czech Rural Baroque house.....


He offered to make one and sure enough, come the beginning of June, I got the following email: I wish to apply for planning permission for the erection of a dwelling house in the town of Bavorov. The footprint of the foundations is 20” x 24”. single storey with attic and yard.

I at once replied: The Municipality of Small Worlds is delighted to herewith grant said planning permission and will seek suitable occupants, at least for the yard..... 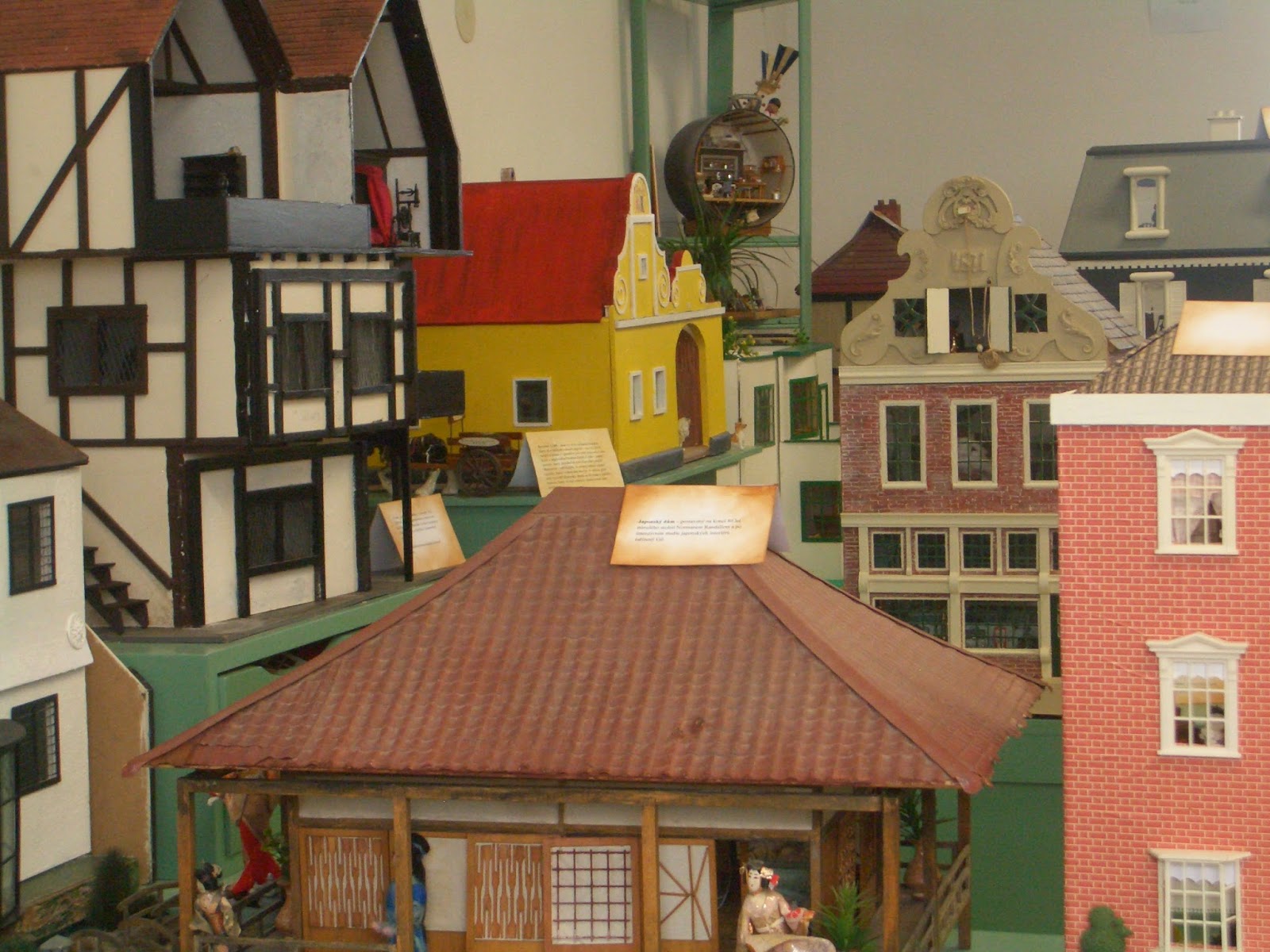 And last week the said dwelling house arrived; it can now be found nestling amongst the Japanese, the Tudor Tavern, the Dutch House, and the Art Deco Triang 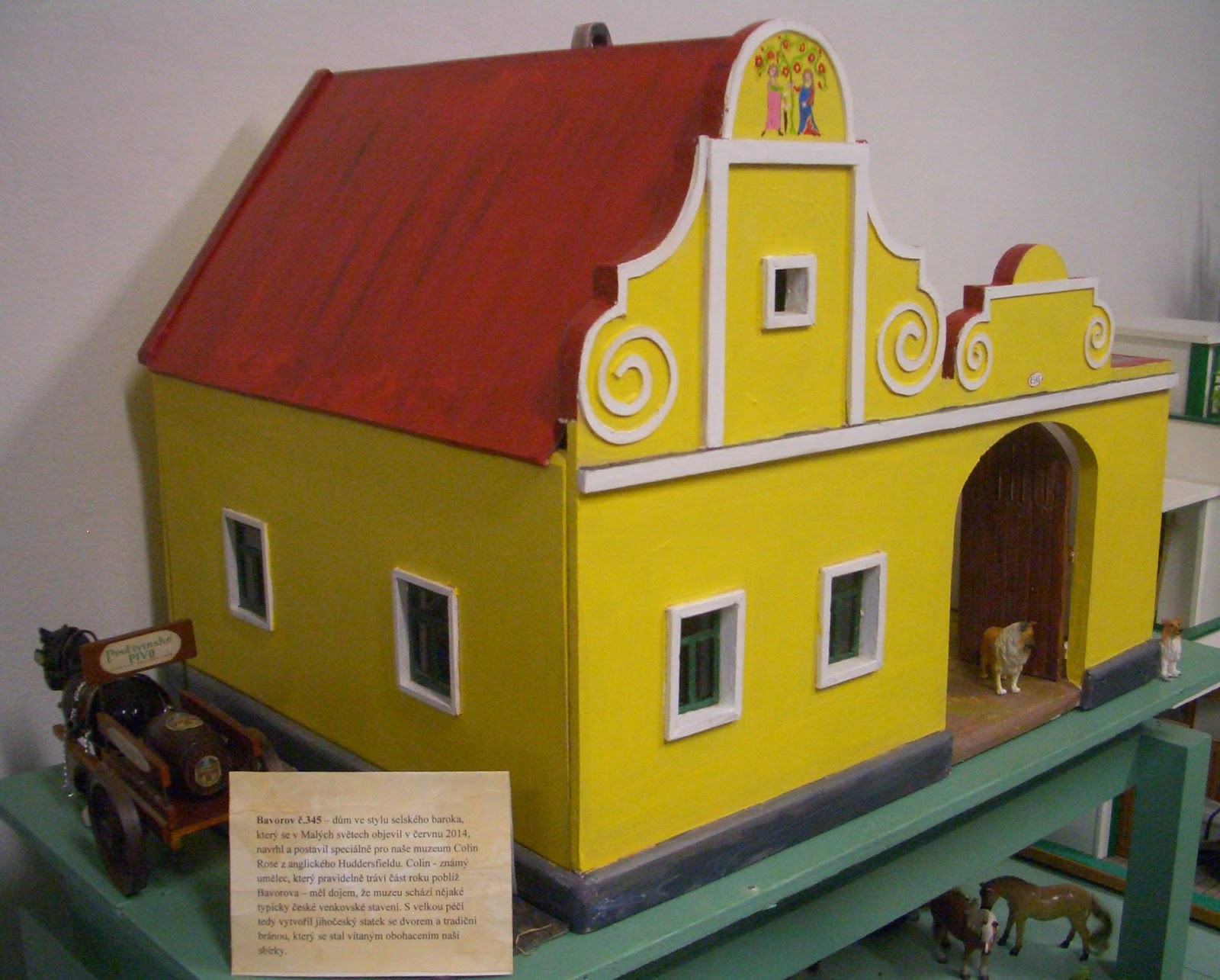 Colin has very intelligently worked out how it could best be displayed and has made it side-opening, and cleverly hinged, so that the front of the house and courtyard can be viewed in all its glory. 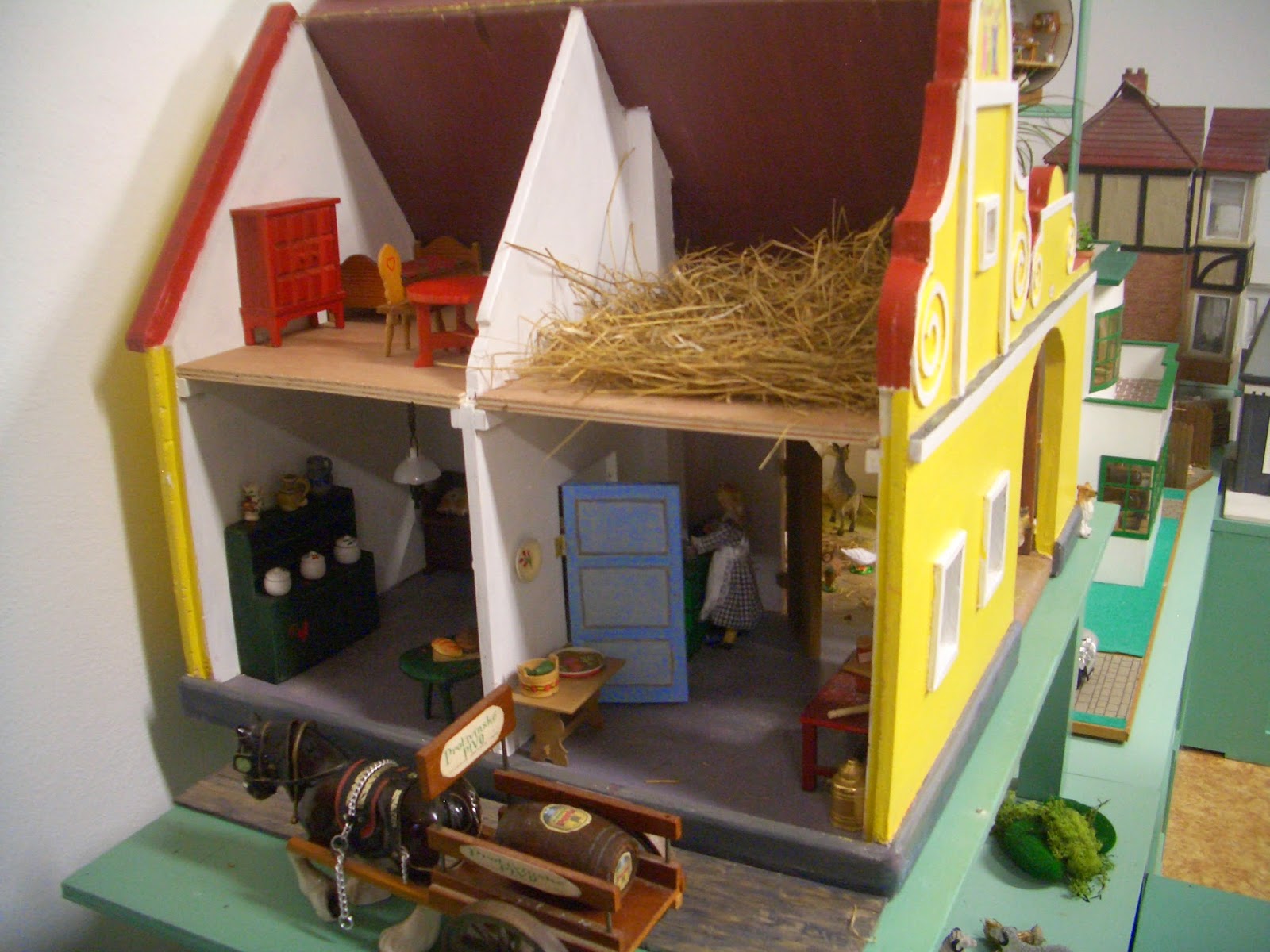 I am absolutely thrilled with it, rushed to furnish it as best I could (somewhat co dum dal – what was available) and to fill the yard with animals. 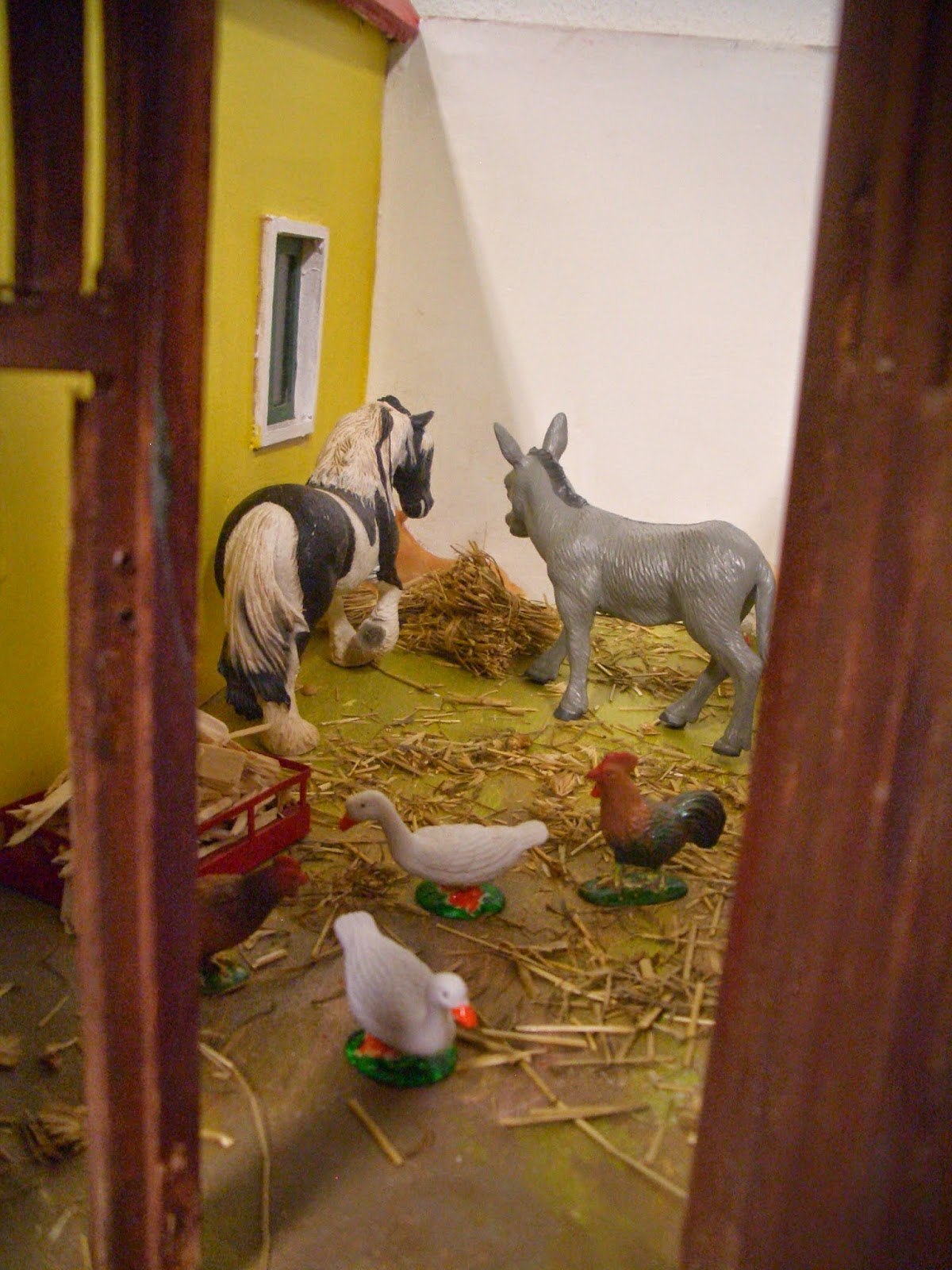 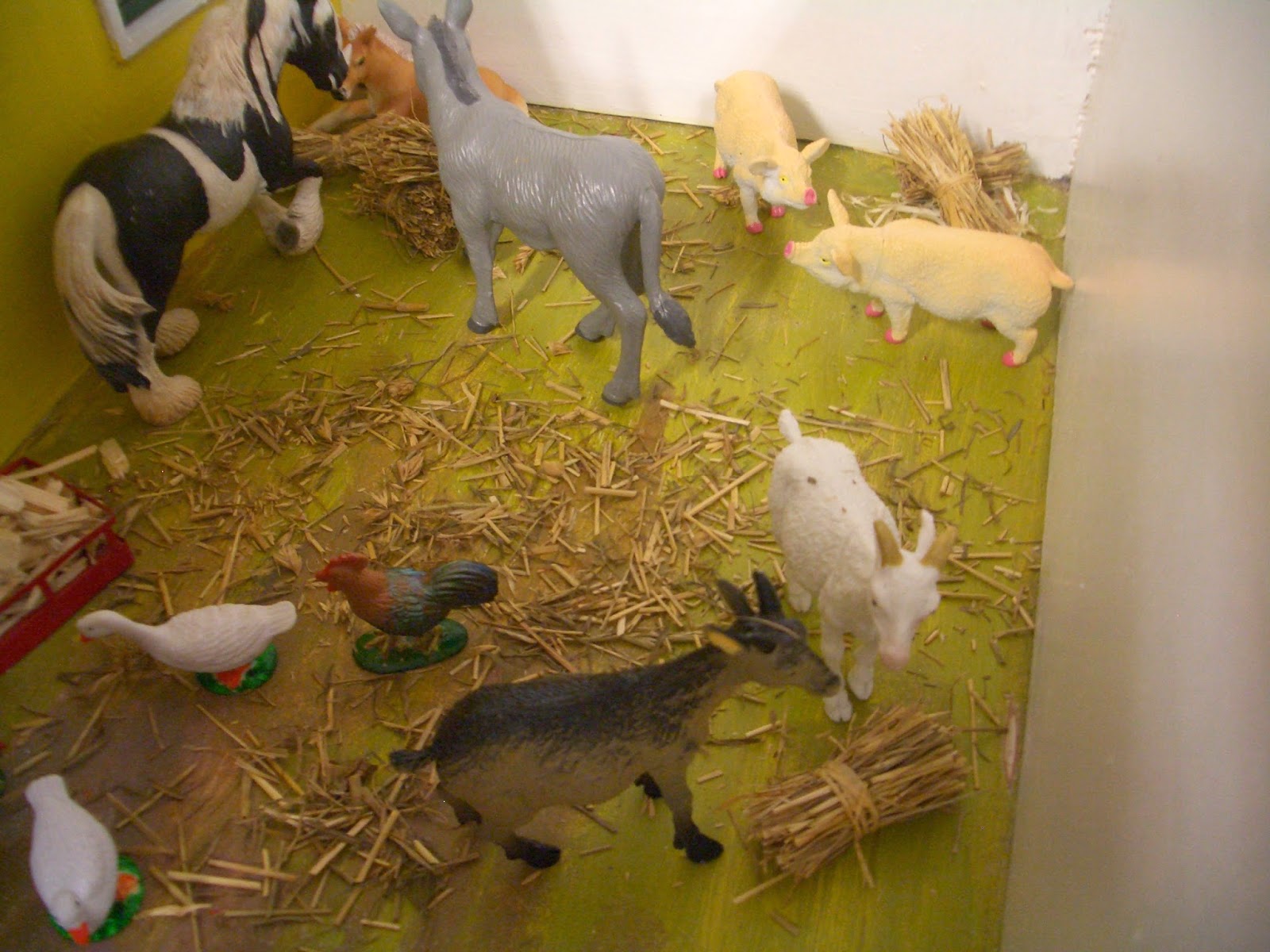 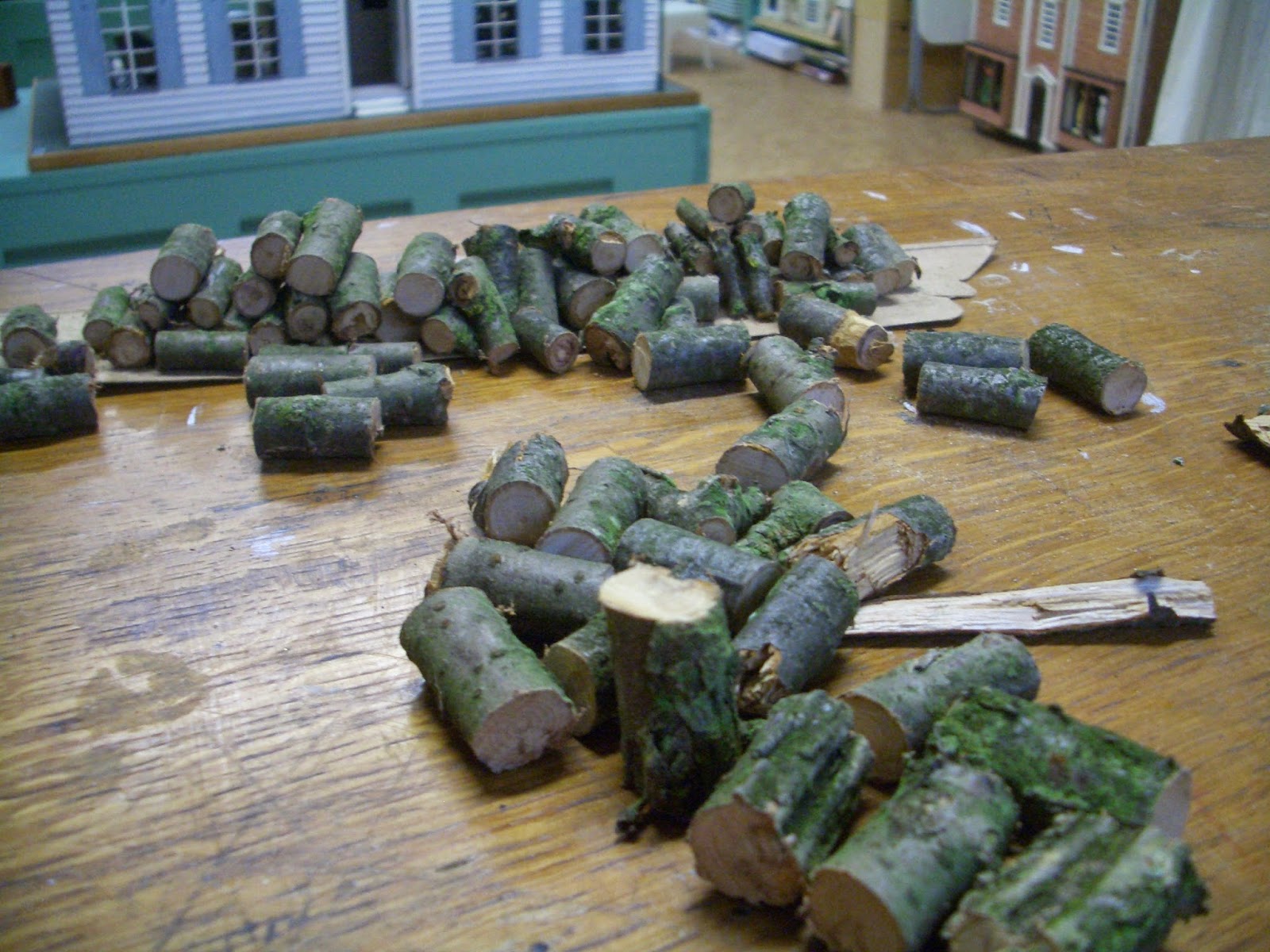 The next day I realised that no Czech house can be without a woodpile – there are some amazing constructions to be seen in the countryside around here – and hastened to begin one with some dead mini branches off my cherry tree.   Veronika, my helper,  and I were happy when Colin appeared during the day and took over the sawing.   However tiny the branches, it's hard work!  He also set up my nice new do-everything tool from Lidl  so such jobs should be easier in future. 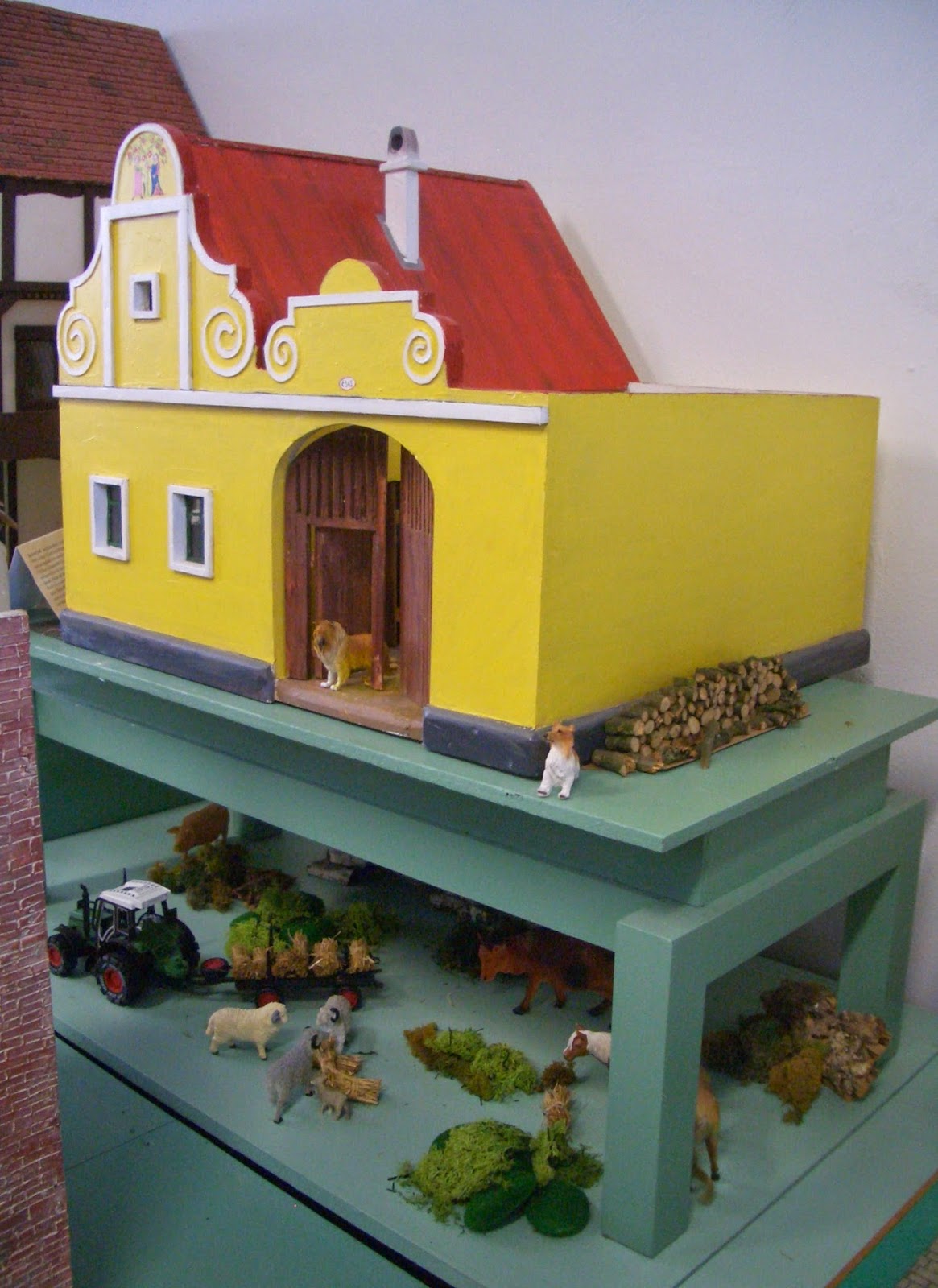 One visitor pointed out yesterday that the wood would get wet and that I needed to run a roof along that wall so tomorrow the corrugated card will come out to create one.  And I clearly need many more dead branches and much more sawing to make that pile truly worthy of the house!

In the meantime, I will leave you with  photos of one of my favourite elements - the traditional triple gateway. 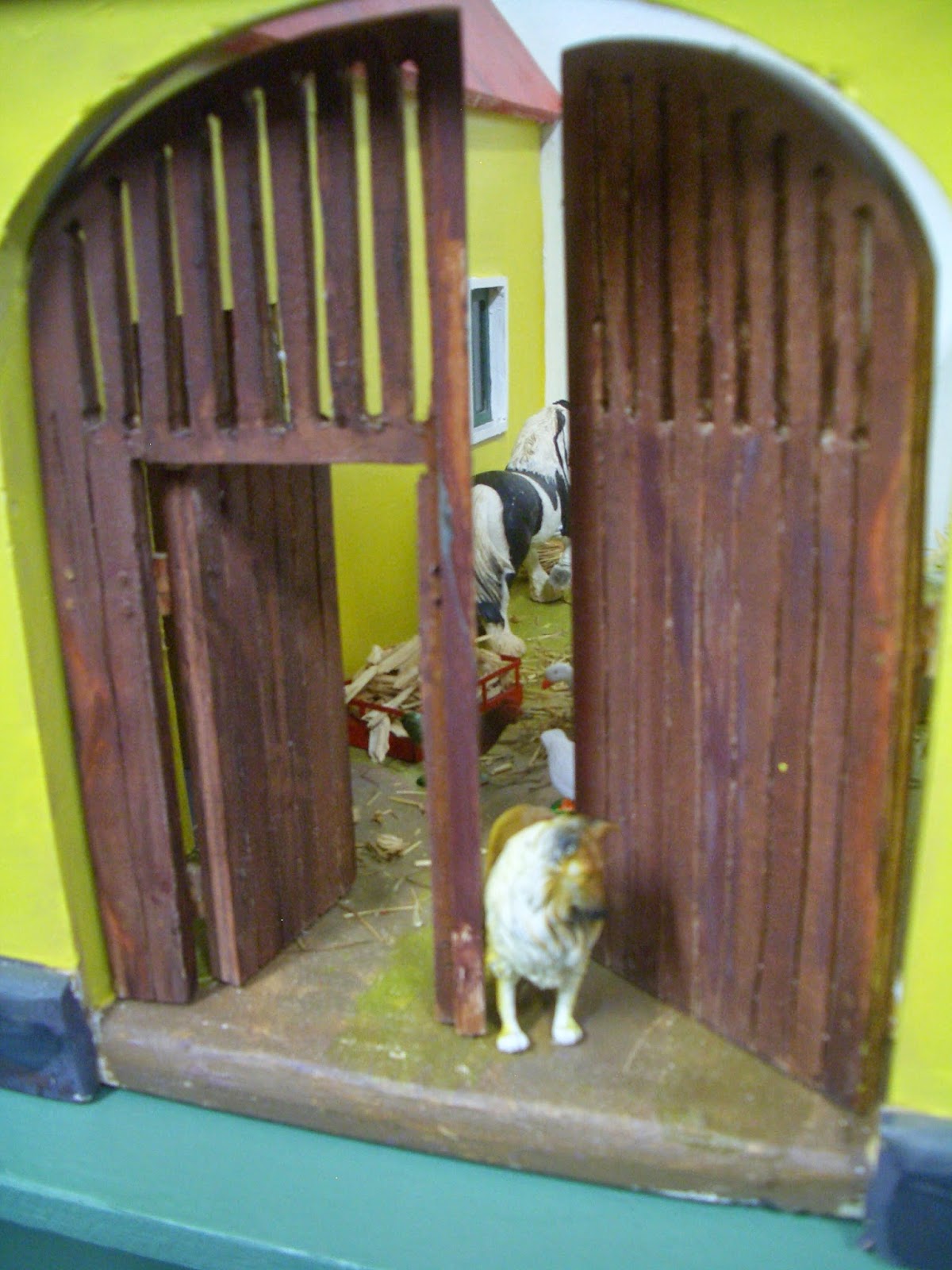 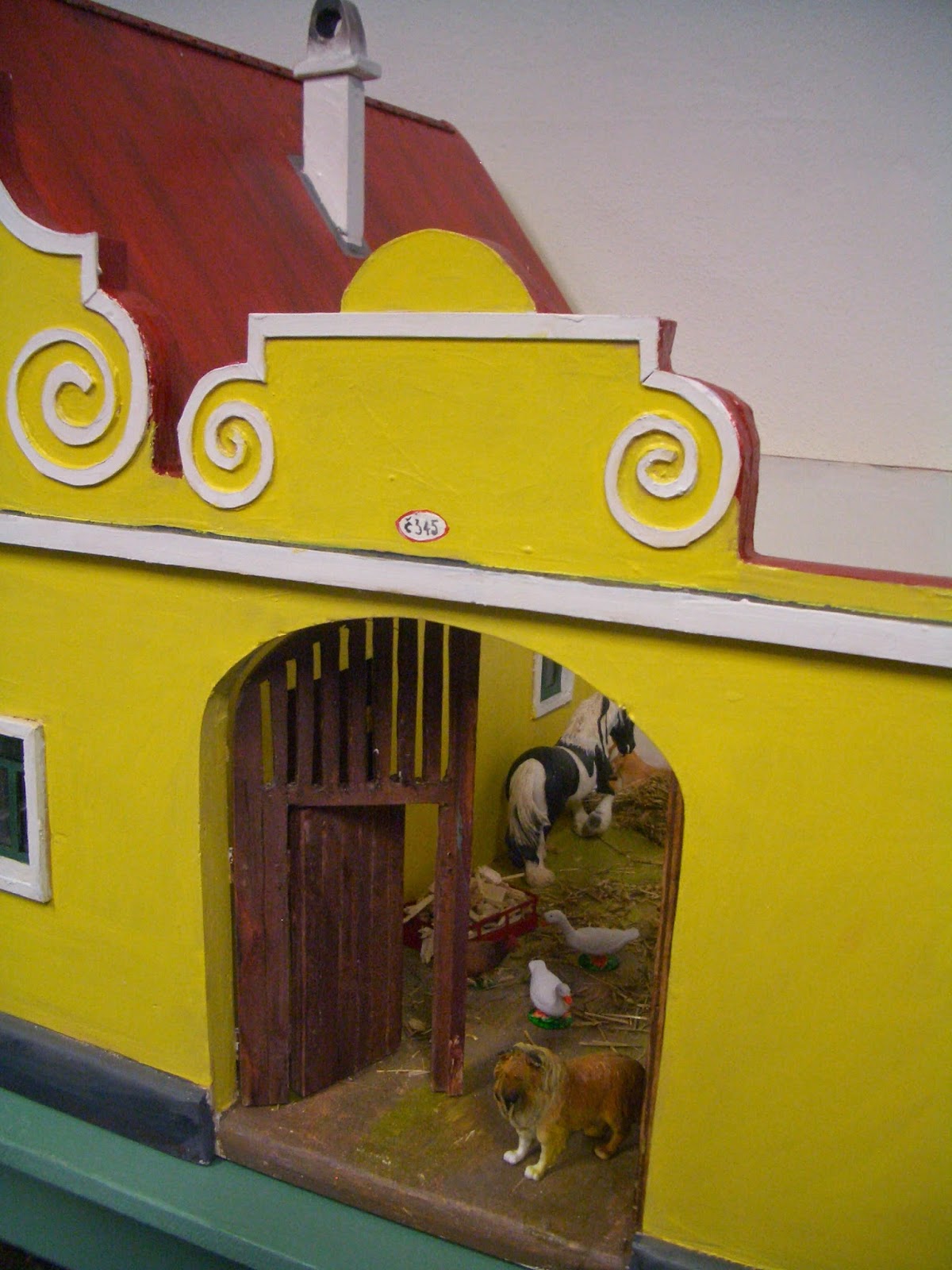 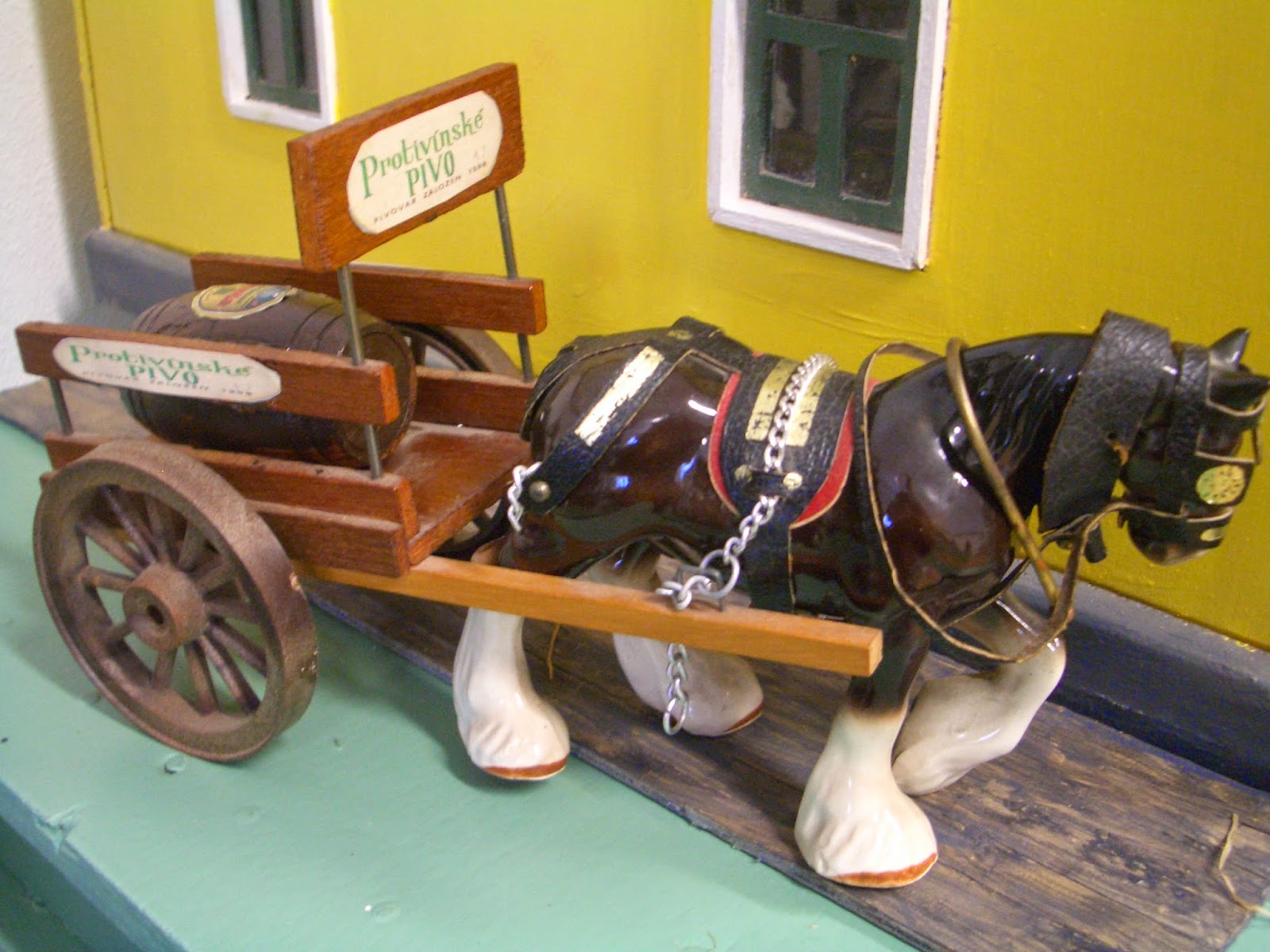 And let's not forget the all-important beer delivery wagon - hastily converted from Swanage Dorset Ales to the nearest local brewery in Protivin.


I am immensely grateful to Milena, Anna and Colin, and indeed to all who so generously give both their time and gifts to the museum.

Last, but not least, a plea for a little help if you enjoy Small Worlds. The museum is now on a rather nice Czech tourist website, as you can see from the banner on the top right of the screen.  (Kudy z nudy means "Where to go when we are bored?")

Unfortunately we managed to mess up our own star rating, which is easily done by misclicking on the wrong star.   If you would like to help Small Worlds achieve a top rating then please click on this link and then on the fifth star where it says "Hodnoceni".   It's the only one not filled in so far, though I hope that will change soon – the whole thing works on averages so you will probably still only see four filled stars;  we are having to build up from a low number.

Many thanks, and thank you too for continuing to follow me on this journey.   This has turned into a longer post than I planned but I hope you have enjoyed a little glimpse of what goes on day to day in Small Worlds.  I hope to see you again soon.