Butterfly and I arrived back in Bavorov the Friday after Easter.   On Saturday morning we went straight to Small Worlds ready to begin work - and we have barely stopped since.     And that's my reason for not having updated my blog since we got here.   We get home and collapse and I'm afraid that the last thing I feel like doing is reviewing all that we have got through during the day.

And my second excuse is the pitifully slow internet connection we have been dealing with until today.   Unlike me, Butterfly has been posting on her blog but she hasn't stopped bewailing the length of time it has been taking to upload photos.   Today we got a new, superfast internet connection (which is also going to save me about £20 a month so huzza for that) and having had my heart in my mouth for much of the afternoon whilst an agile young man cavorted on the roof installing it, I - and I hope you too - are now about to enjoy the benefits of his hard work.

For those unfamiliar with Small Worlds, and indeed to remind those of you who haven't seen it since last year, this is what it looked like when we arrived 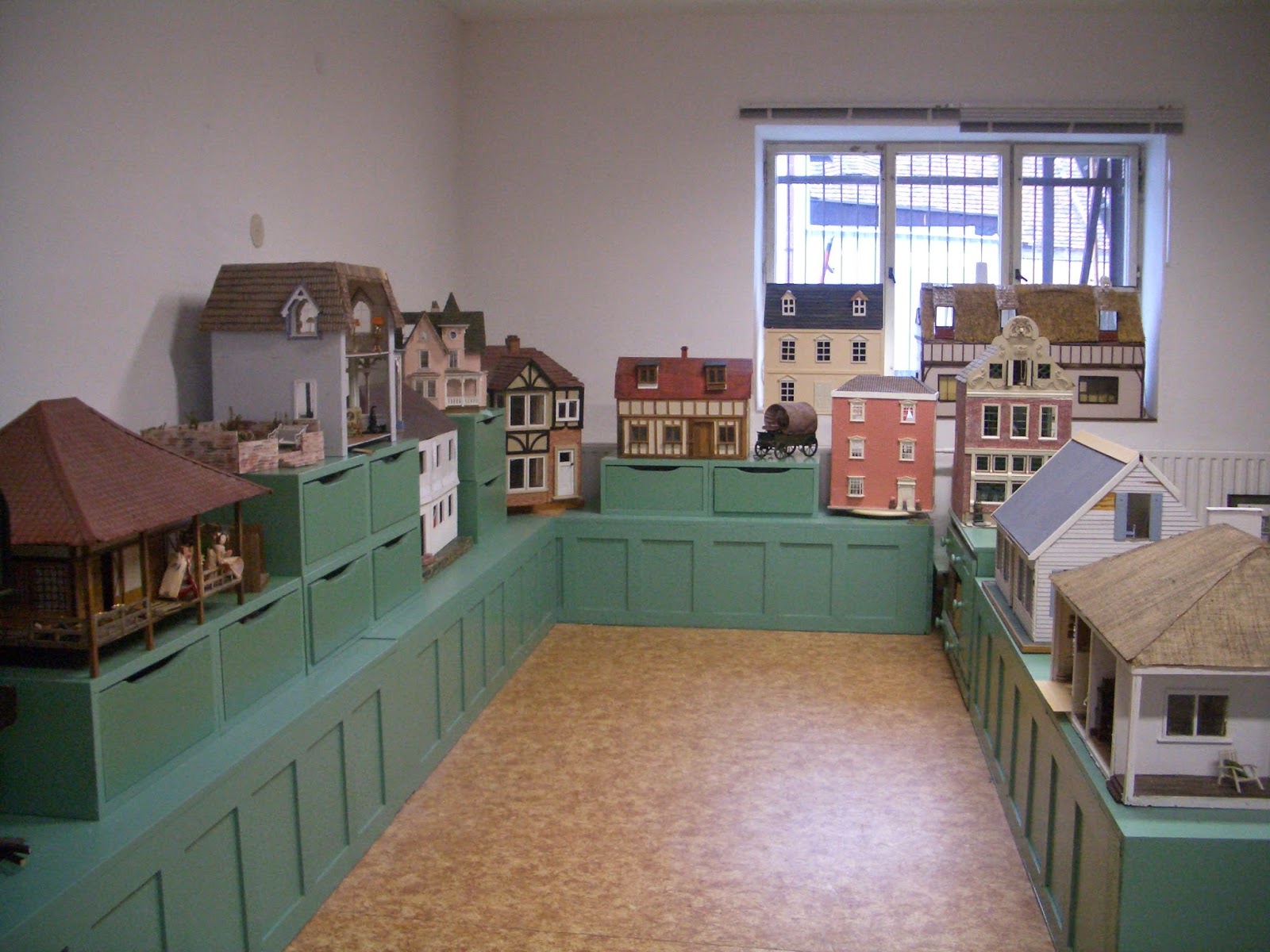 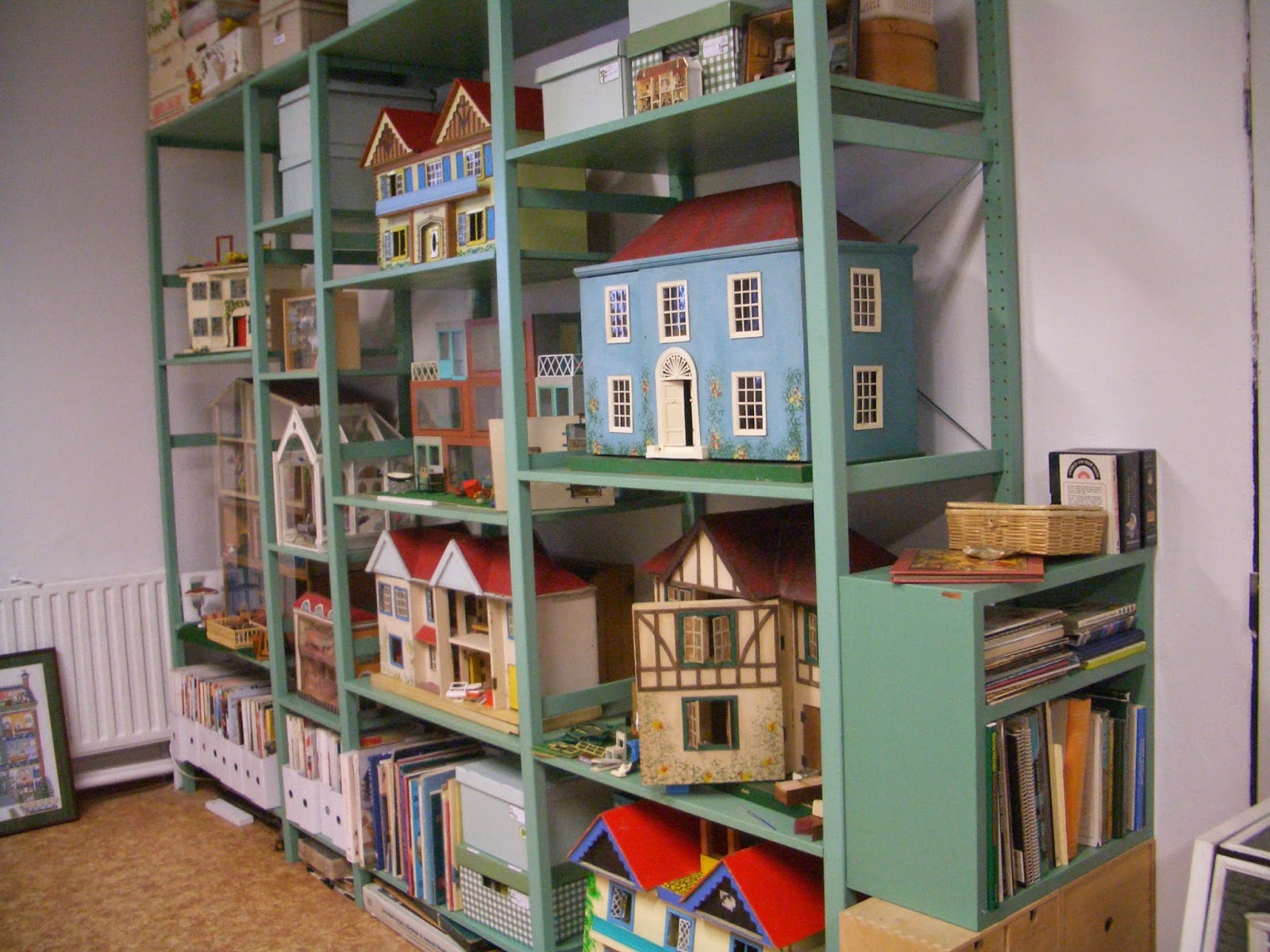 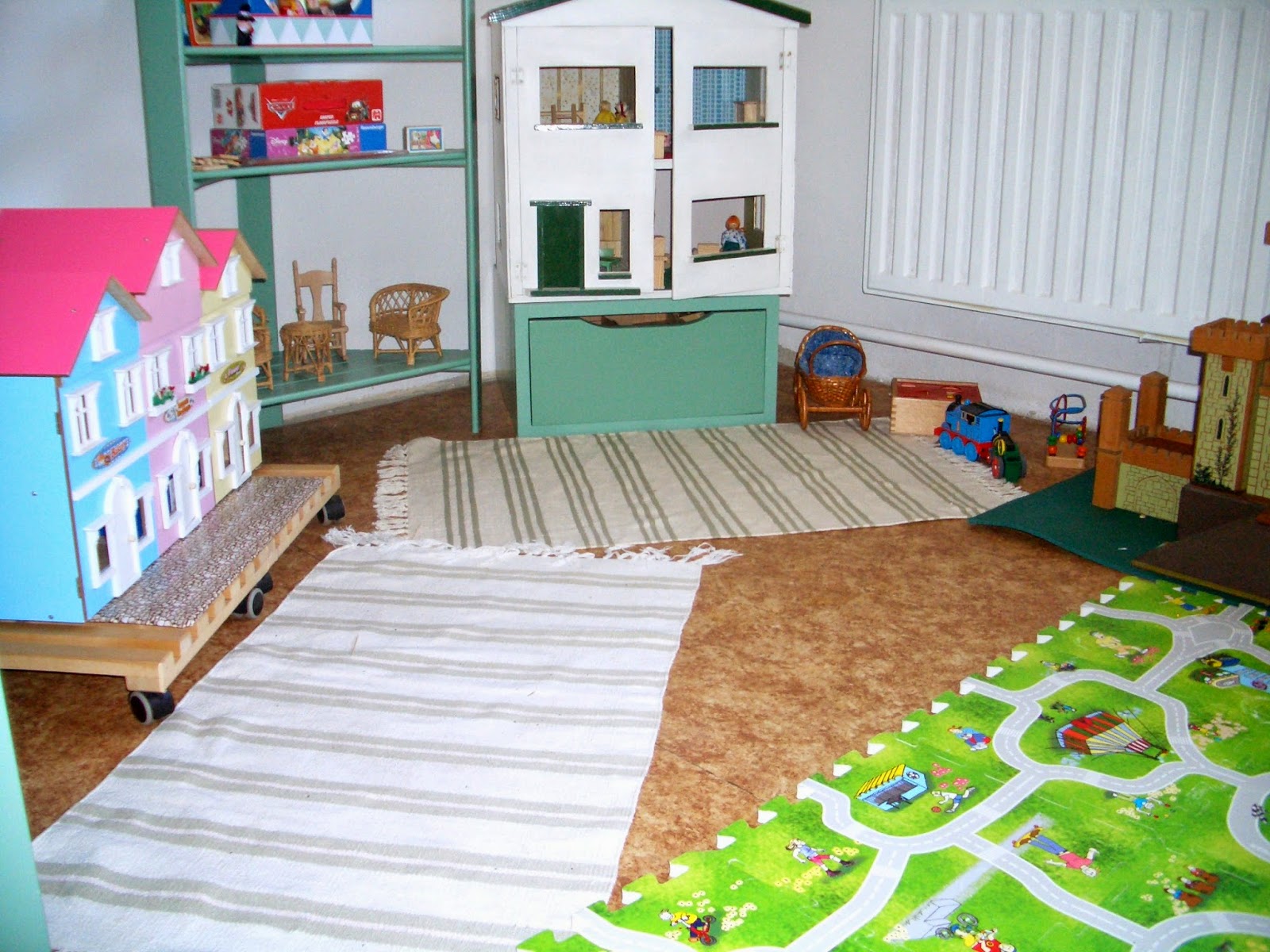 It didn't take us very long to change all that!   Why should we do that you may ask?   Blame six months in England when, having recovered, more or less, from moving house, I had time and energy to trawl ebay ......

The result of that was three large new dolls houses, to join the one large one that had been donated to Small Worlds last summer, and which was still sitting in the spare room in Bavorov, waiting for attention.  One of these you have already met.   The second, a very large, typically English, double-fronted detached house, which I simply could not resist because it reminded me forcefully of the house we had just moved out of, turned out to be riddled with woodworm.   So it has been thoroughly treated and is currently sitting in storage in England.

It has made up for its woodworm-riddled state by being a sheer delight, beautifully made, and clearly modelled on a real house.   It will hopefully appear, restored to its full glory, some time next year.

Like the Art Deco Triang, the last one I acquired at the beginning of this year is a house I have had my eye on for a long time.   A Bodo Hennig Classic Landhaus.   Very much out of my price range, even second-hand, so when one appeared on ebay, collection only, with a low starting price and very close to where my brother lives, who was I to resist bidding?   Especially since I was the only bidder and so it has joined the collection for the princely sum of £25. It wasn't actually labelled Bodo Hennig so that may have been why I was so lucky. 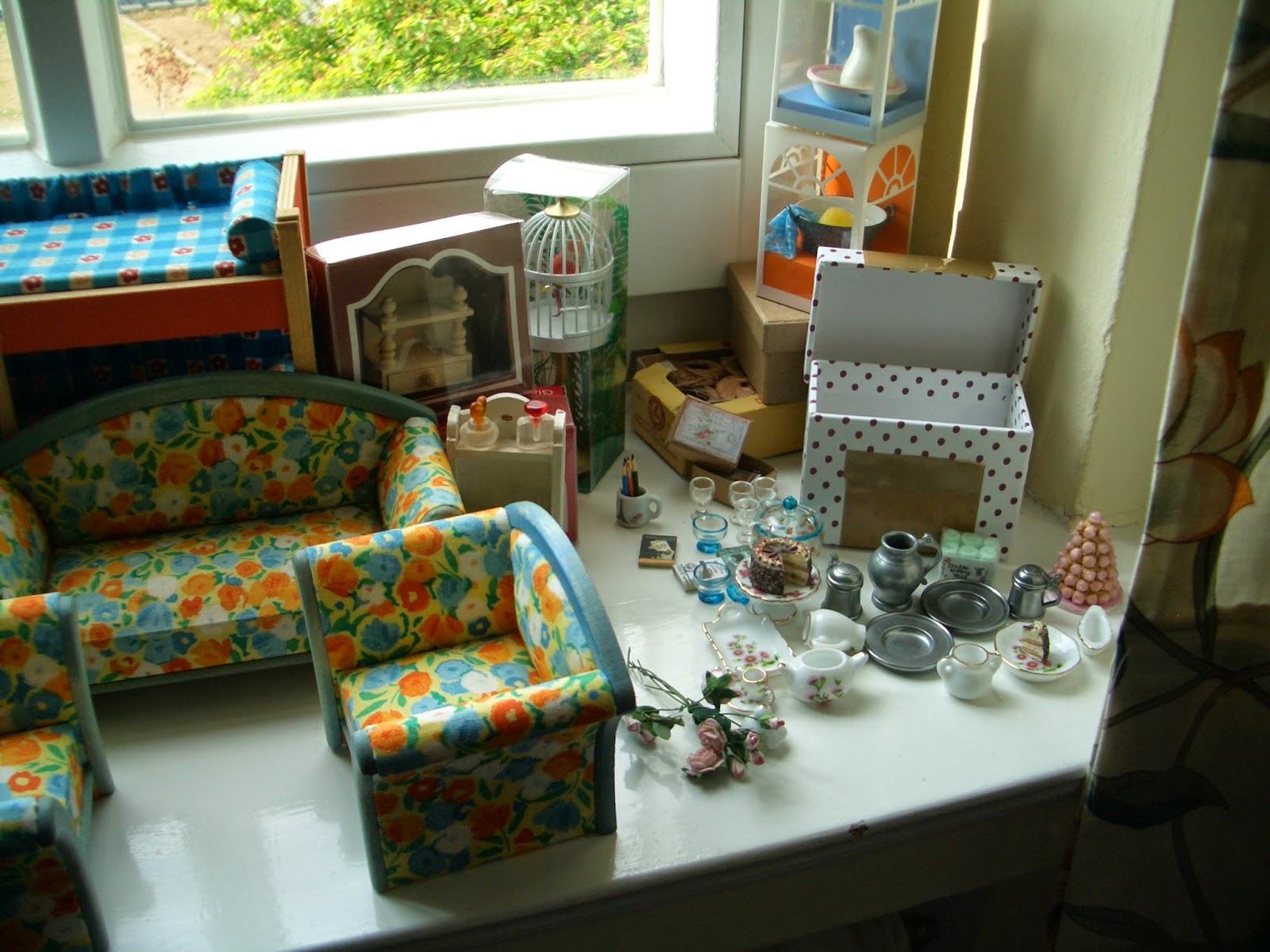 Since January I have been trawling both German and UK ebay to try and collect some Bodo Hennig furniture since I should like to keep the house true to its maker. 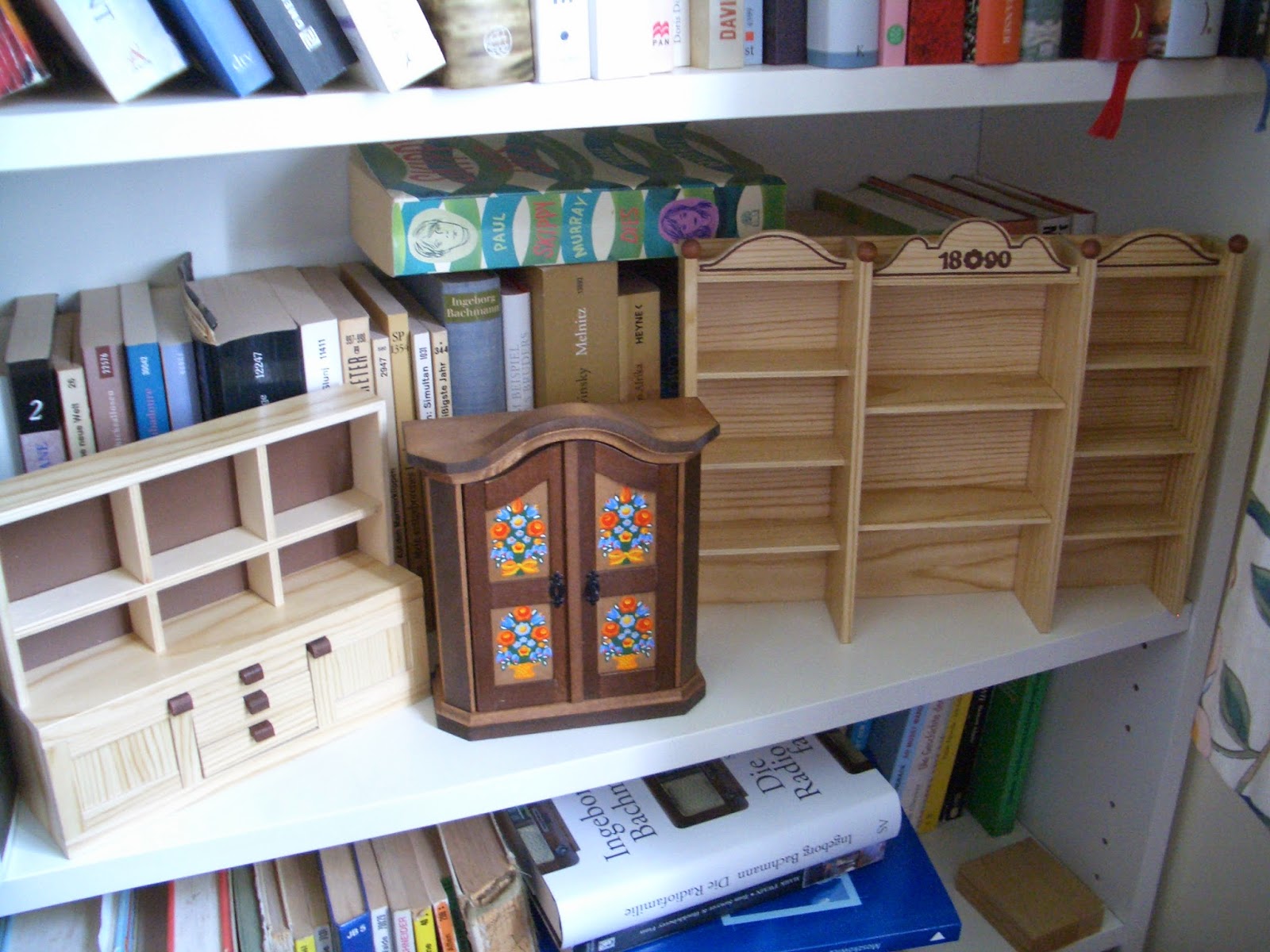 There was a pleasing haul waiting for me when I got to Bonn in April; most of what I bought came from German ebay. 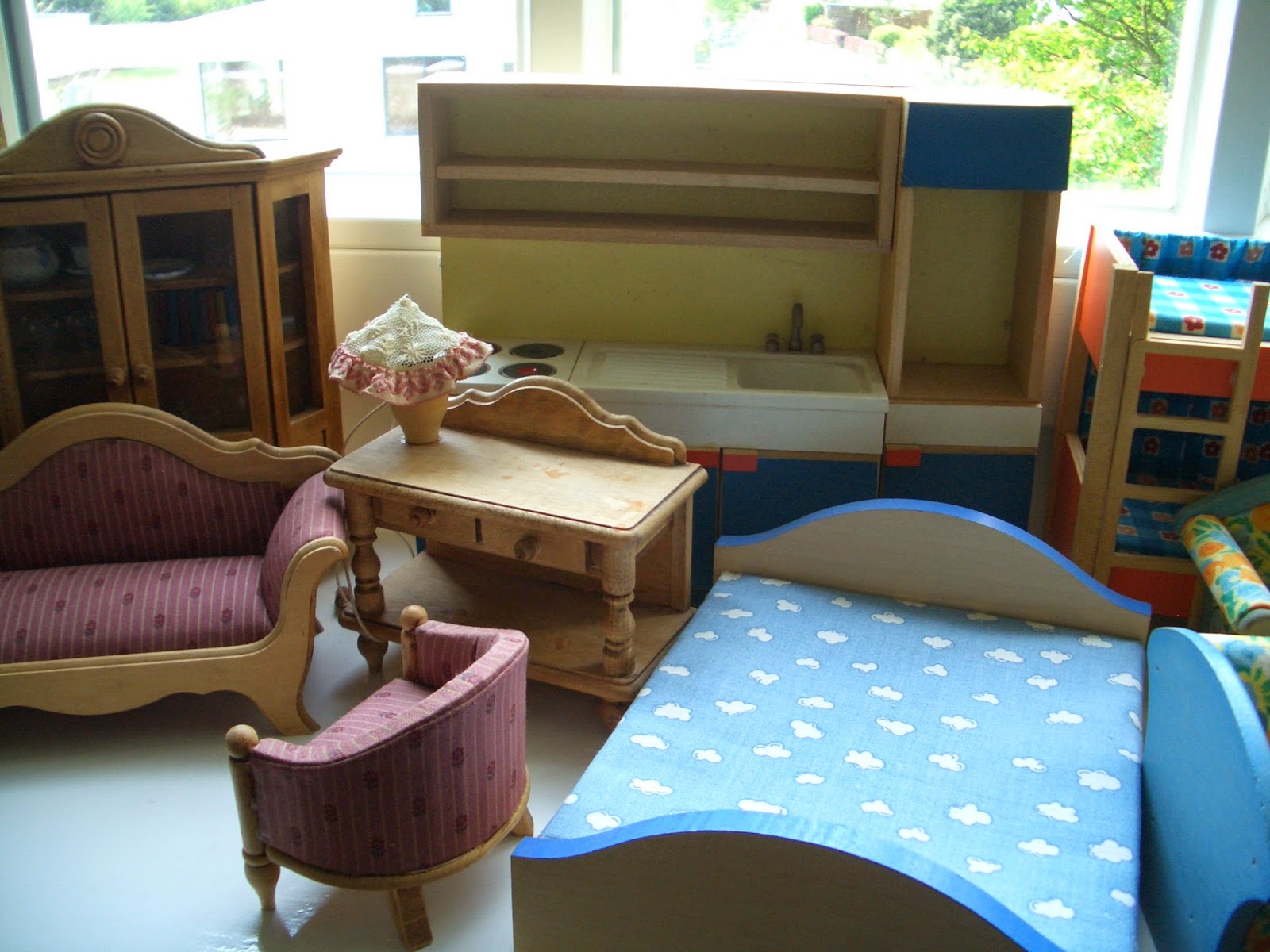 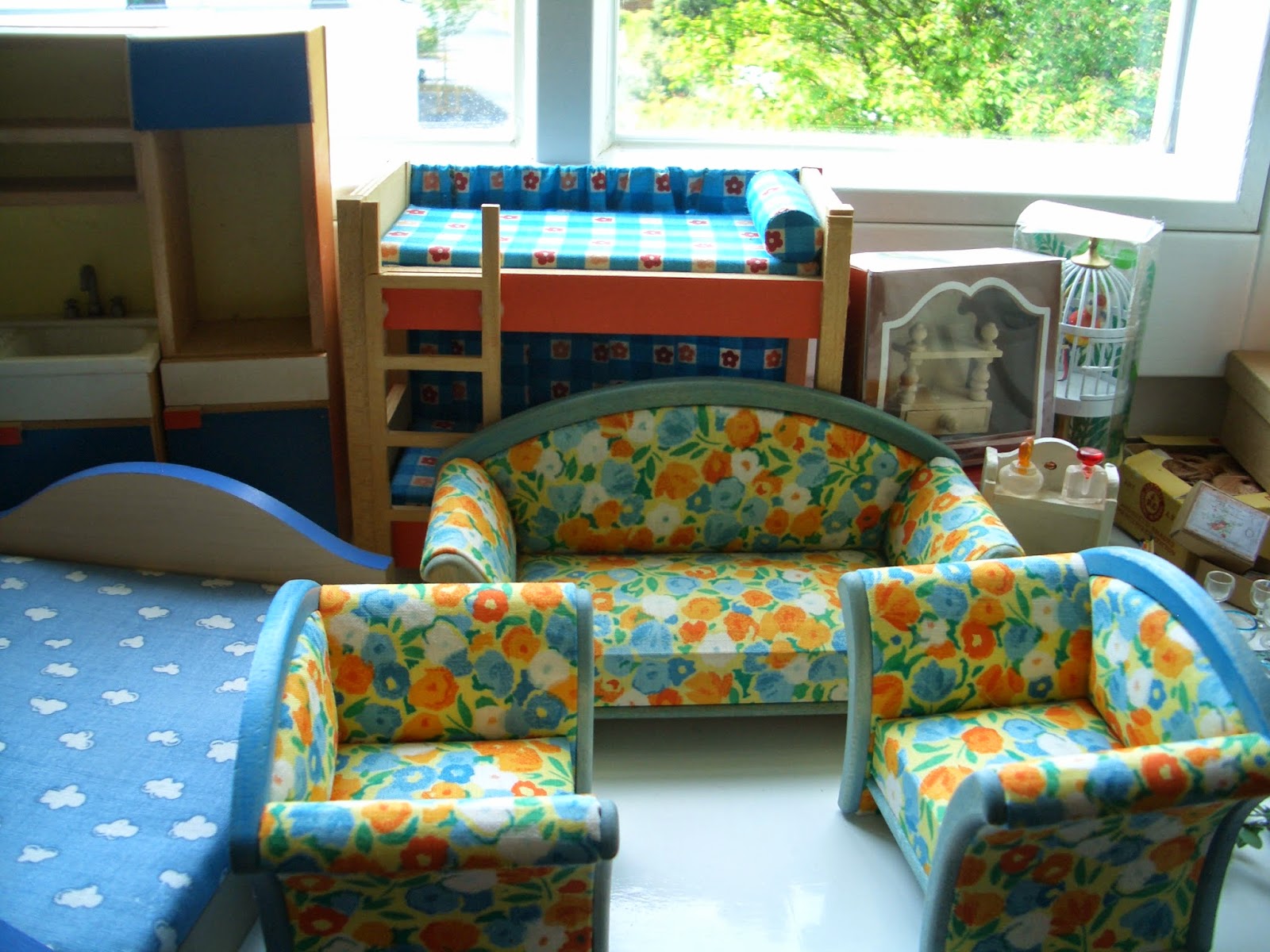 Like the other two houses, the Bodo Hennig is huge - fully three feet across - and at the moment it has now taken up residence in the spare room, while Susanne's house has moved across to Small Worlds for renovation.

"But where will you put them all?", I hear you cry.  Because Small Worlds already seemed full to bursting last year.   Butterfly and I have been mulling this question over for some months.   One idea I had was to see if there is a small store room in the same building so that I can shift houses in and out, thus creating an ever-changing display.   Another idea is to offer houses to some of the museums in nearby towns. My thought was that each house could go on display with some brief publicity material about Small Worlds, thus increasing the footfall and the space at one stroke.

However, the first thing to do was to see if we couldn't improve the layout in Small Worlds itself. So by the end of our first morning there the place looked like this 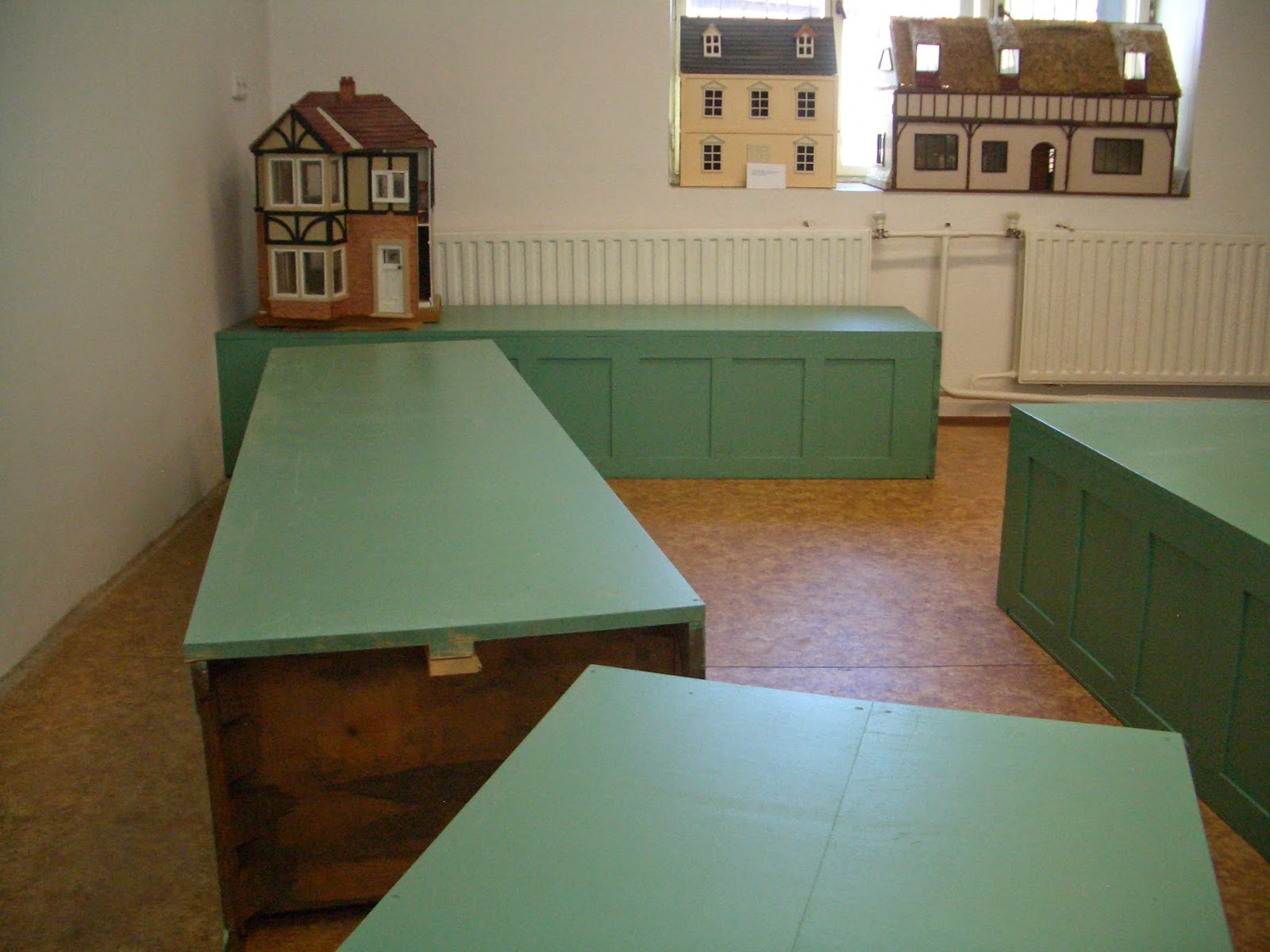 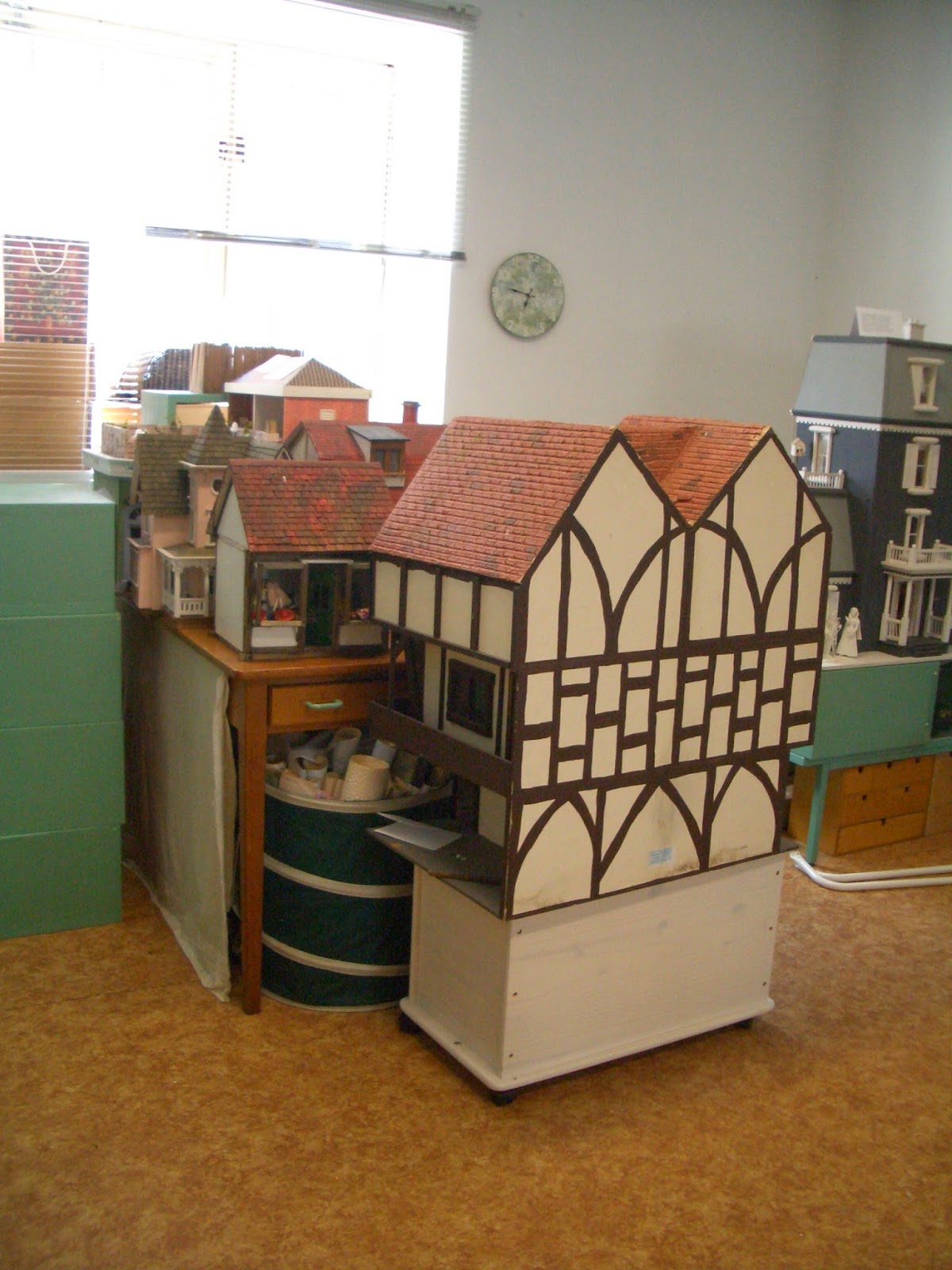 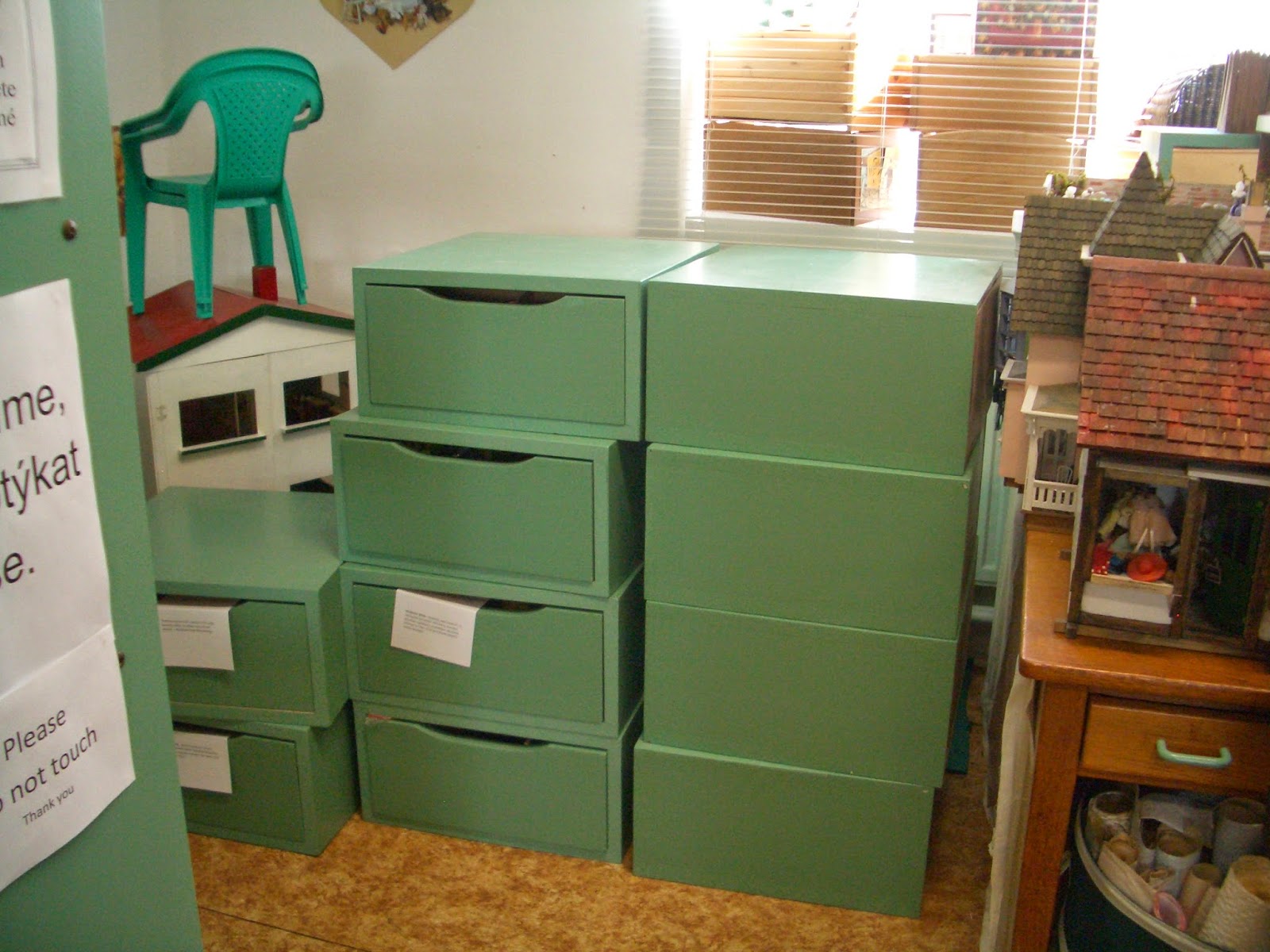 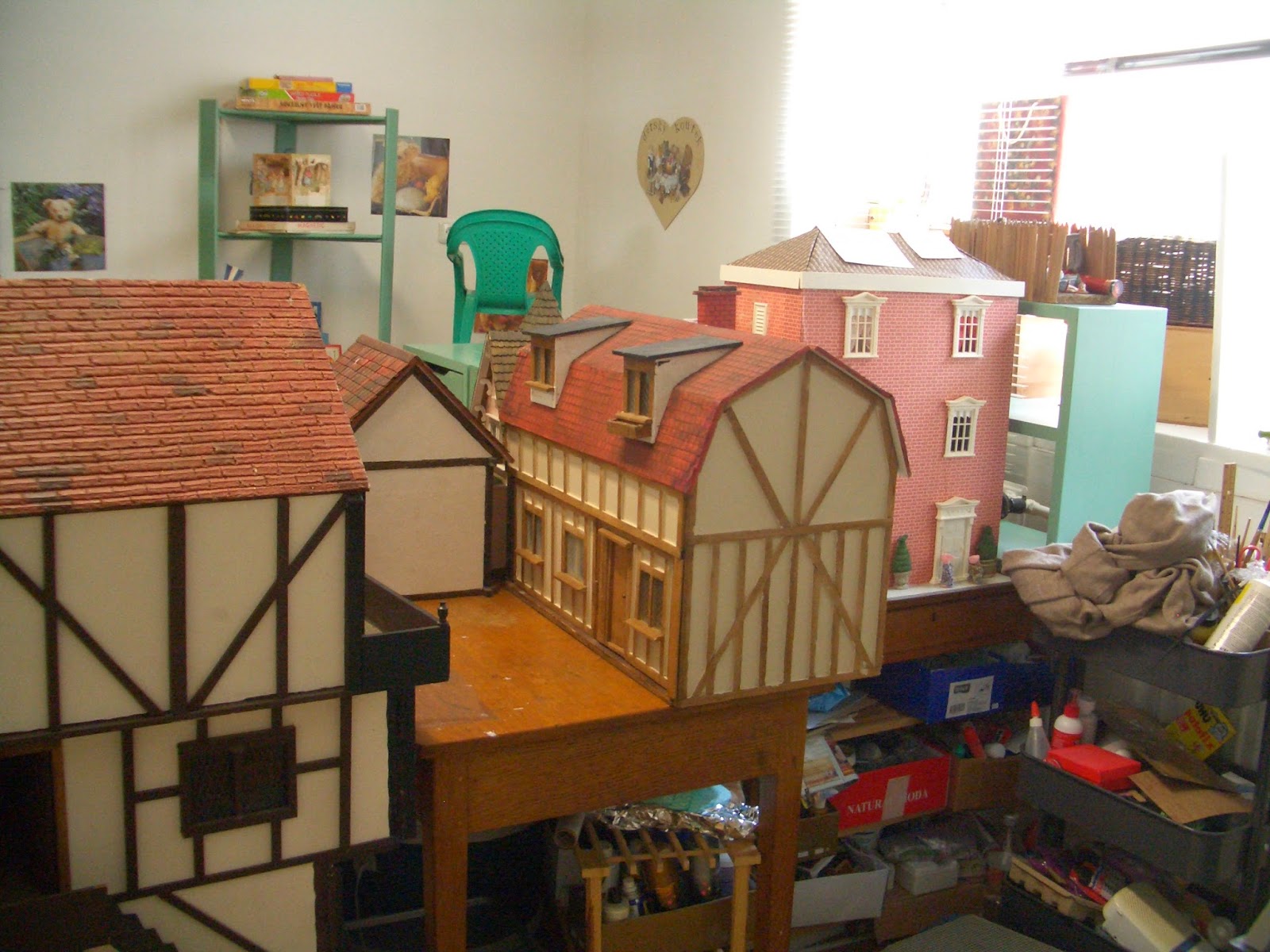 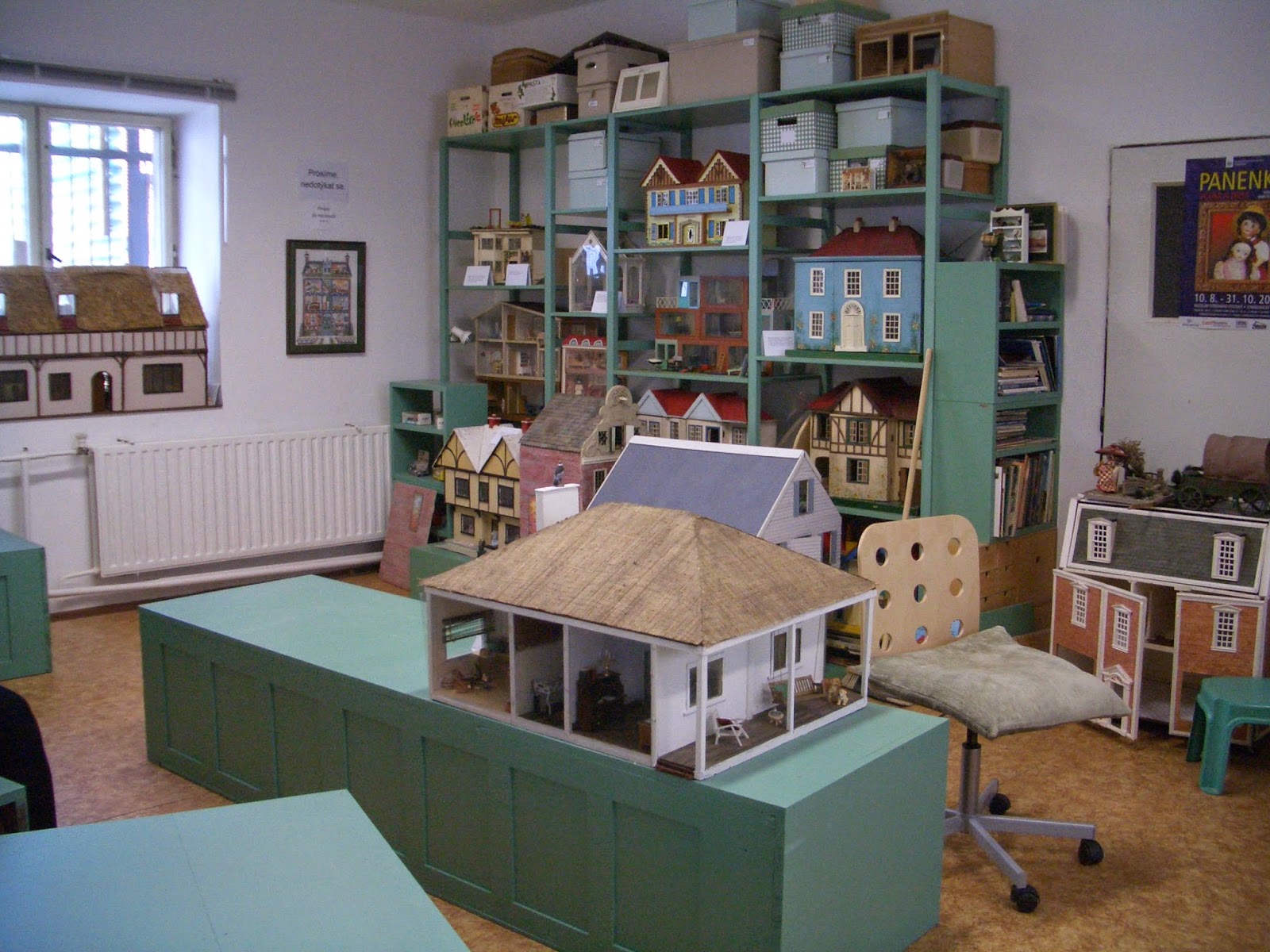 Our idea was to use the BBC archive cupboards (remember them?) to create bays and see if we couldn't gain space that way, without having to buy too much extra in the way of shelving or worktops.

All the houses went on the move again and Butterfly performed prodigies of strength hefting the weighty counters around, not to speak of shifting most of the houses solo.   Without her, none of this could have happened. 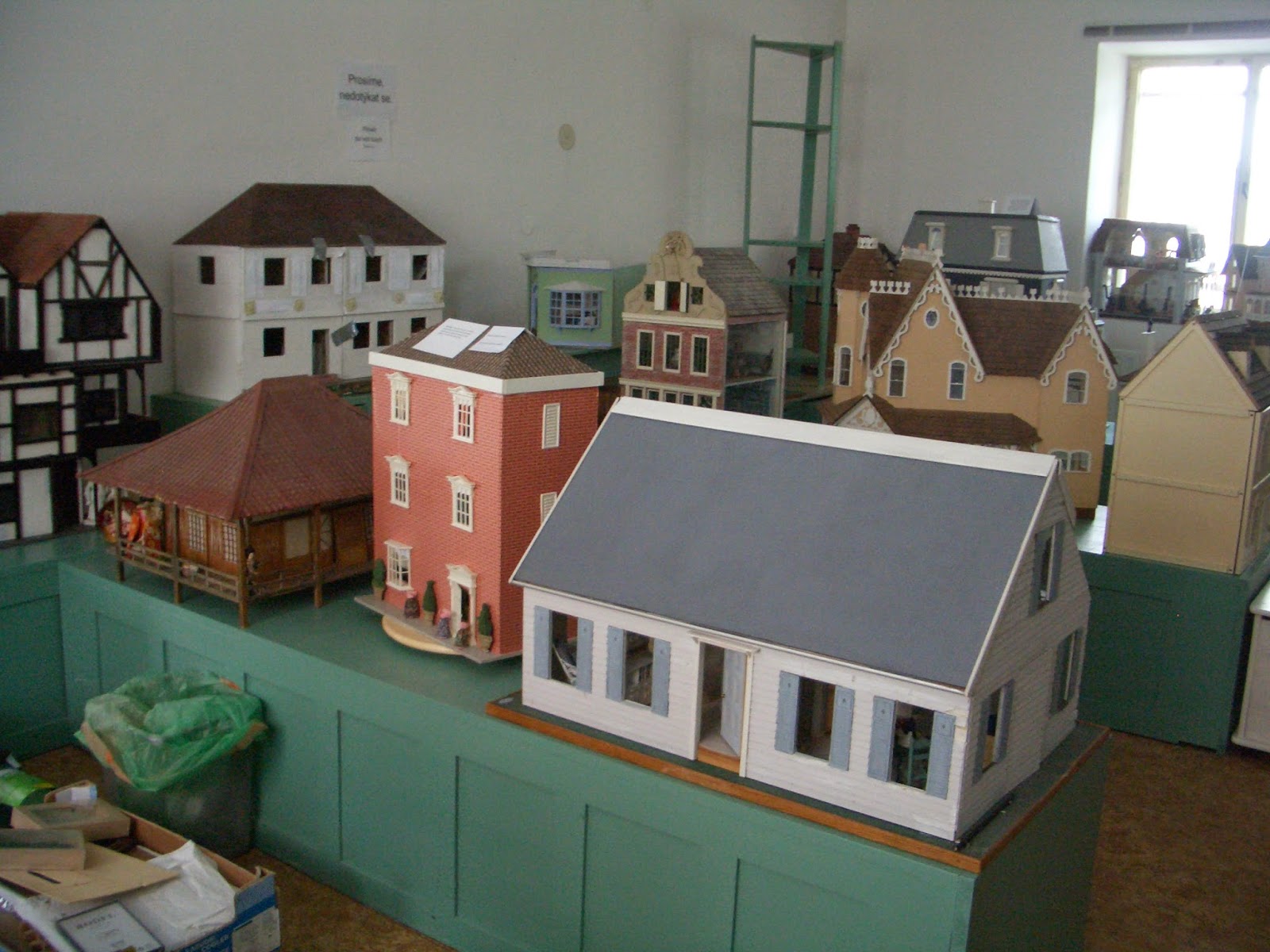 By the end of the first day we had a layout, and by the end of the second, every house had found a new home - and most importantly, so too had two of the new ones. And there is still a bit more room to manoeuvre when the other two are ready. 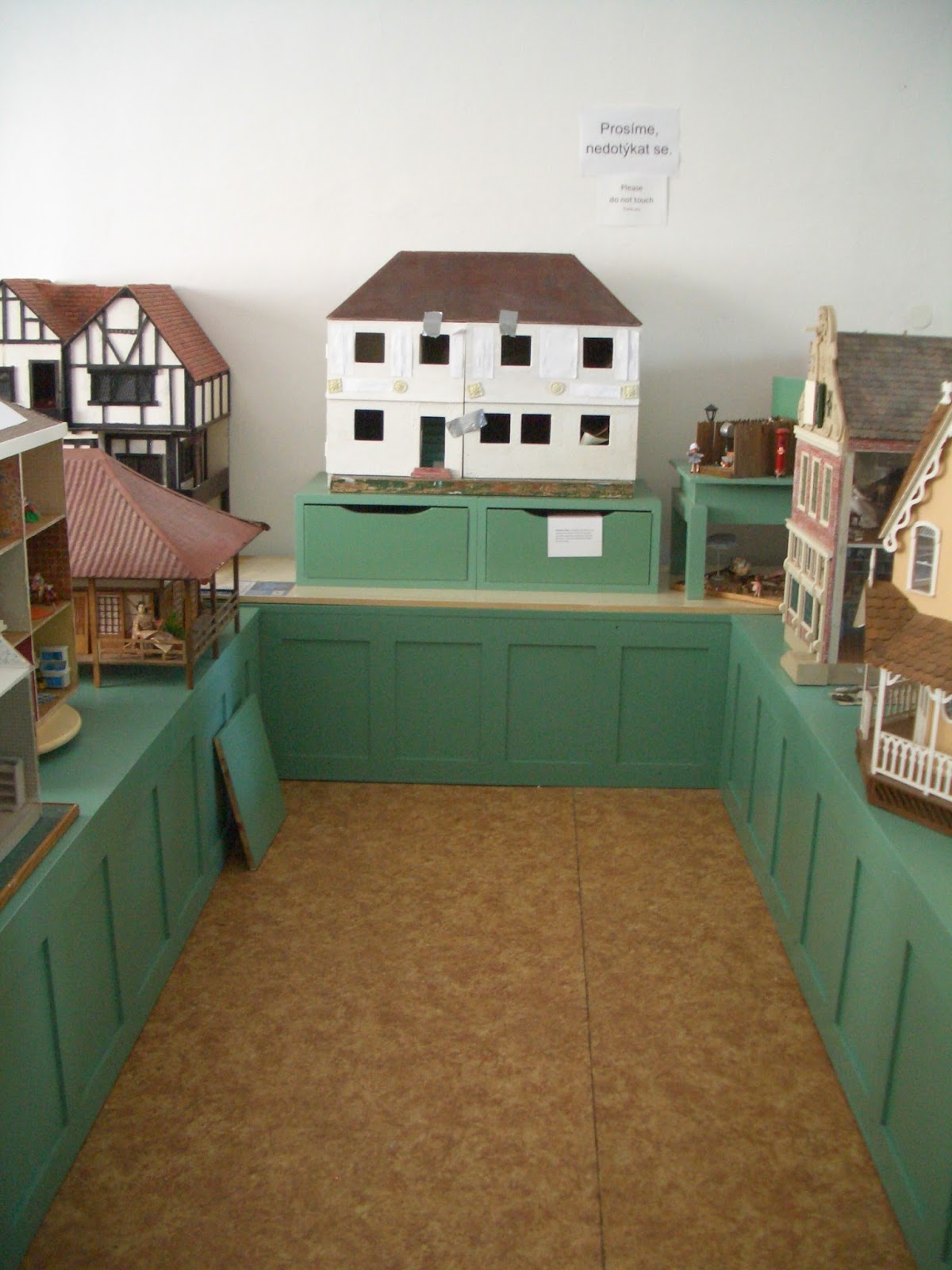 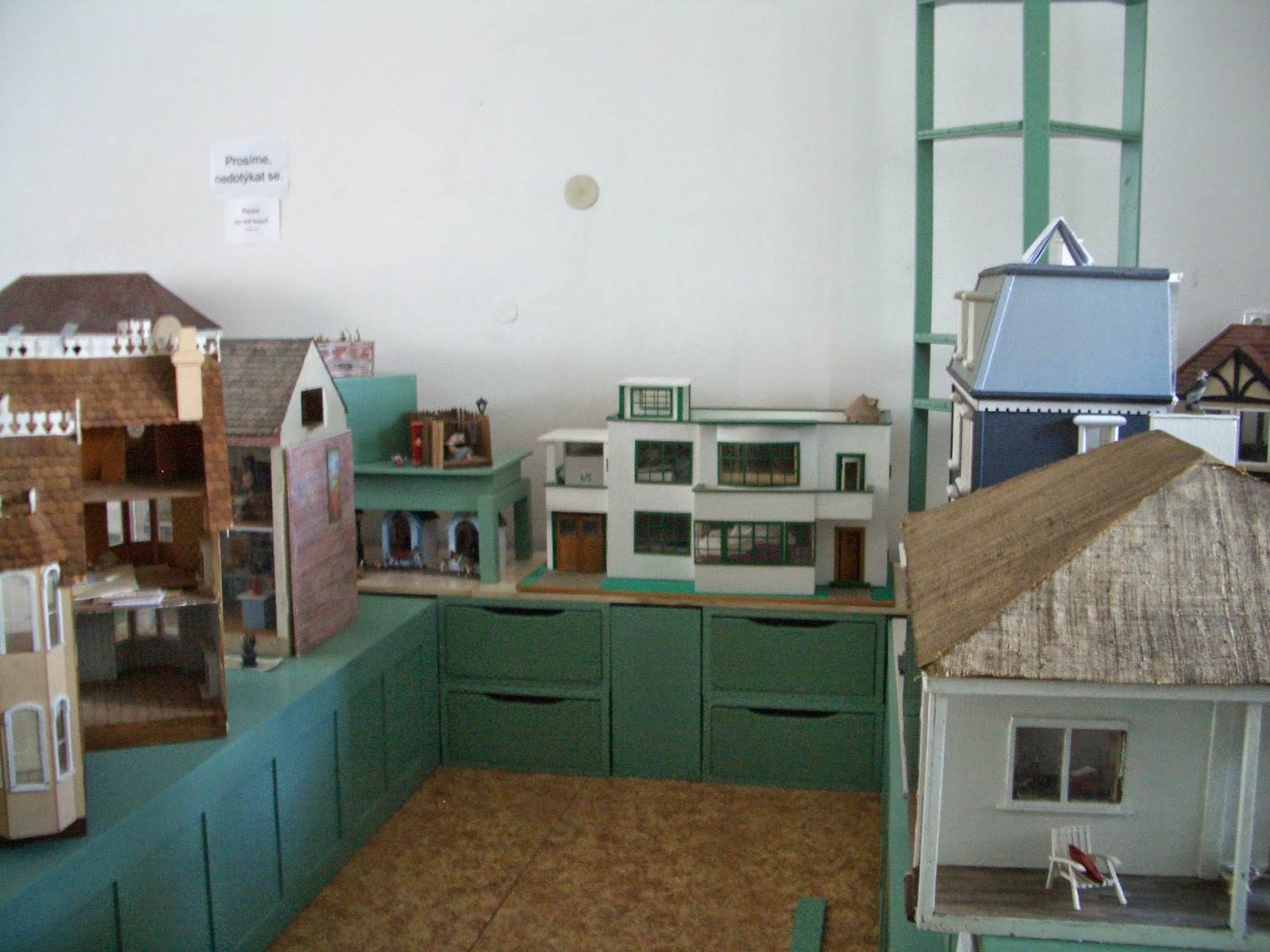 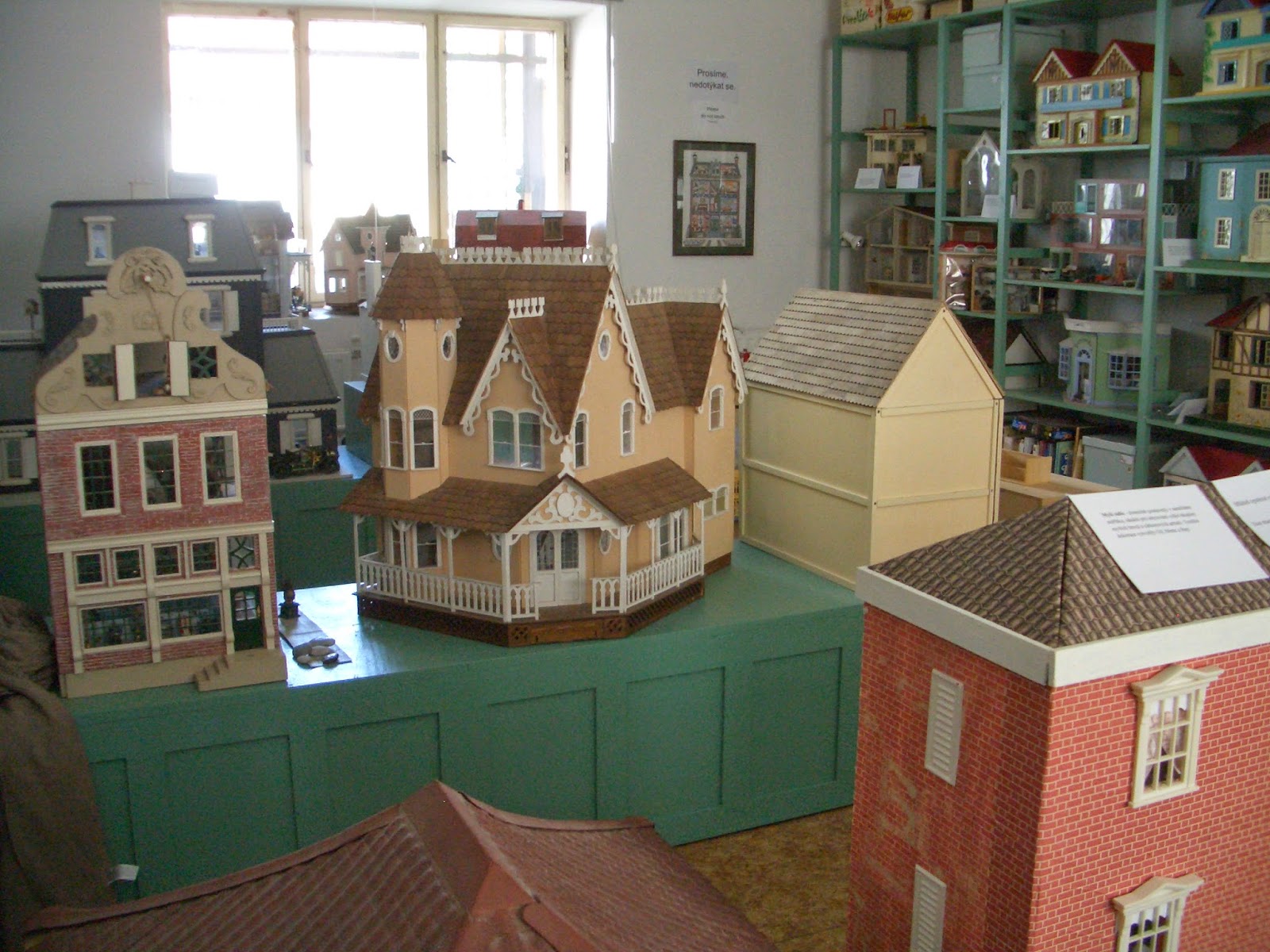 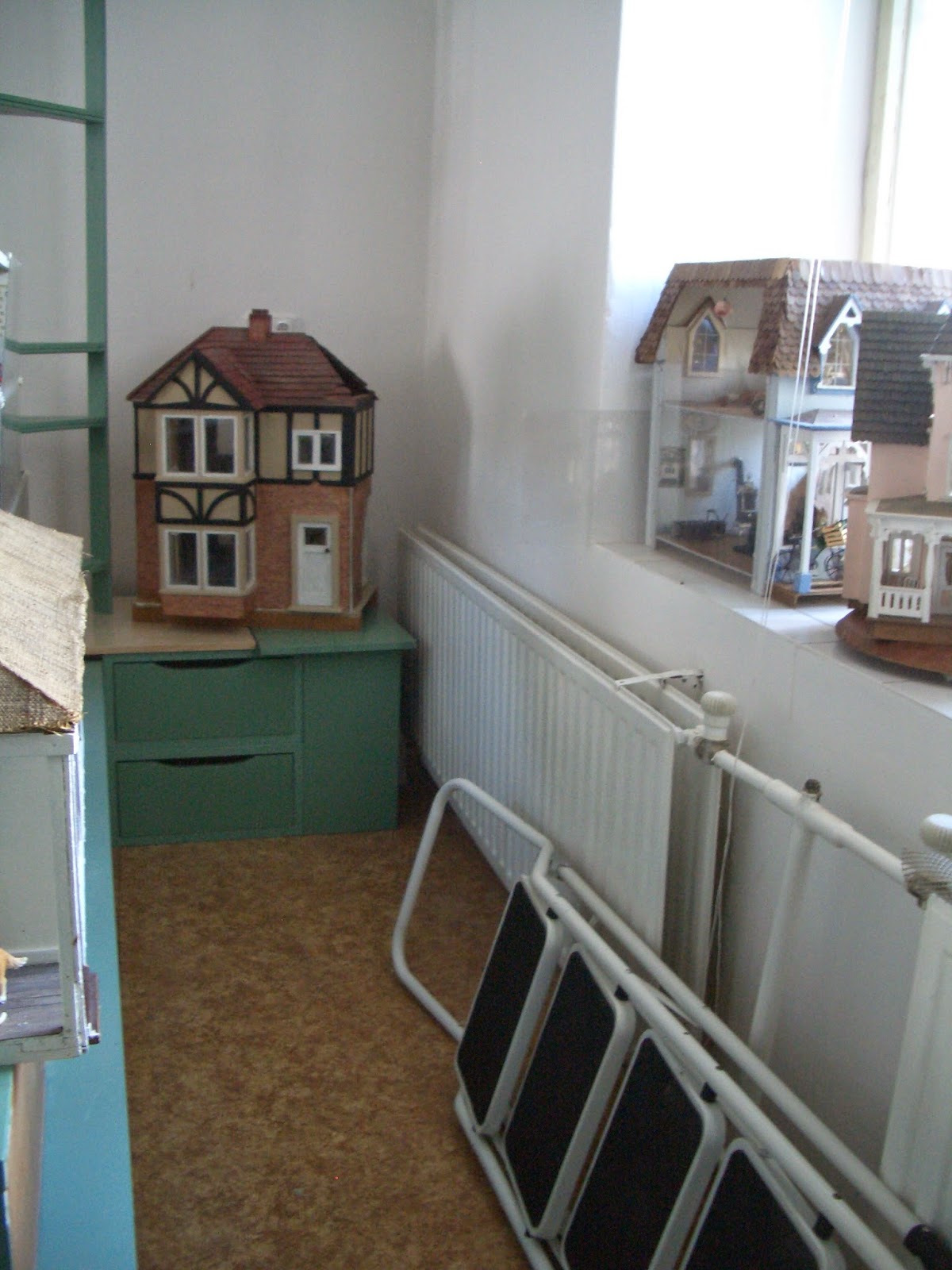 An unexpected bonus is a passage way right at the far end of the room - a sort of semi-bay - which allows us to make proper use of the large window sill.
After all that heaving and hoving, Butterfly worked her usual magic and created two separate workstations for us, so that I can be as messy as I like whilst she can work in an orderly manner.   She started work at once on the Tudor Inn and I yet again found myself facing many shoe boxes - back to the tedious task of sorting them all out so that the contents can be easily found. 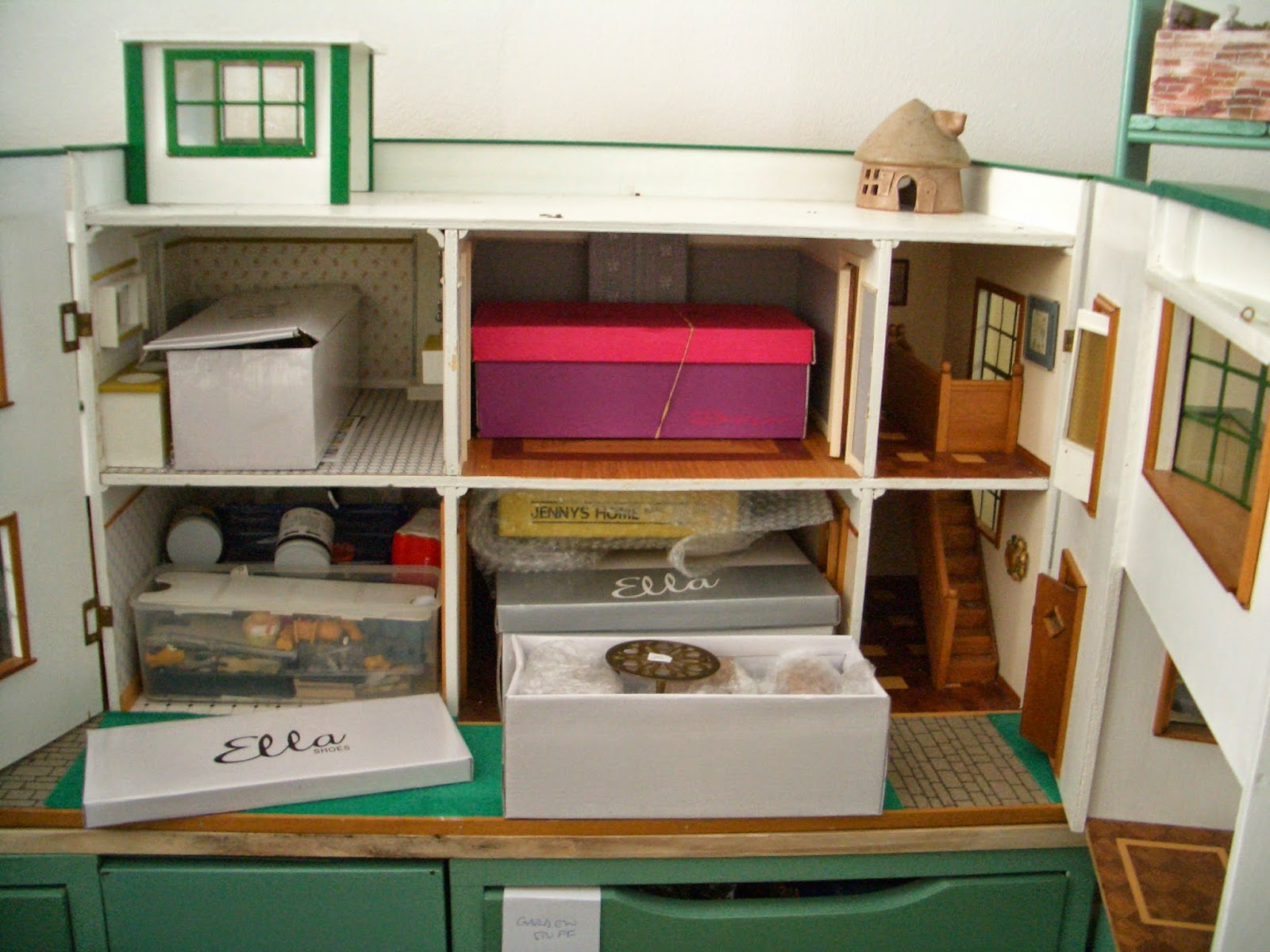 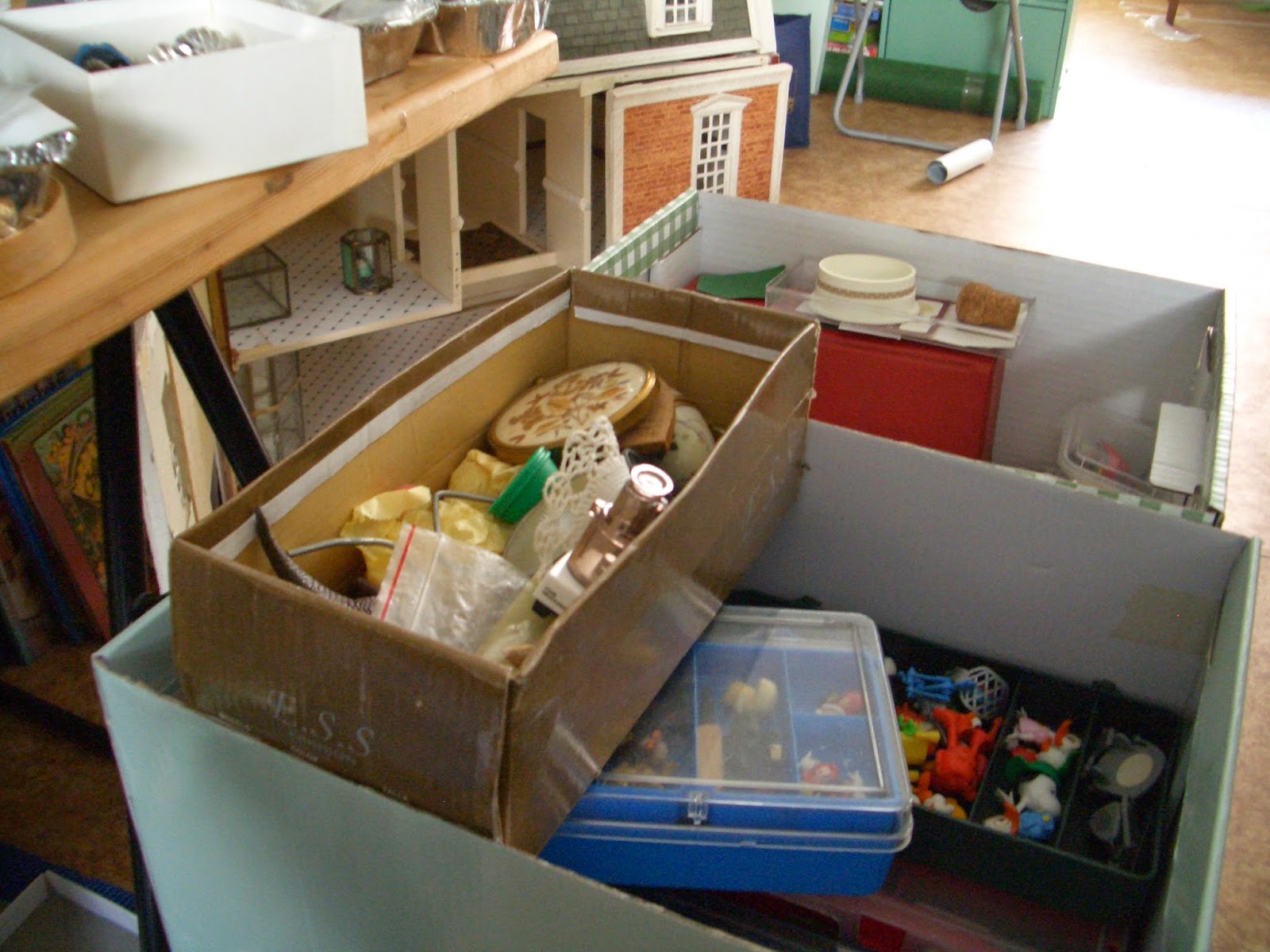 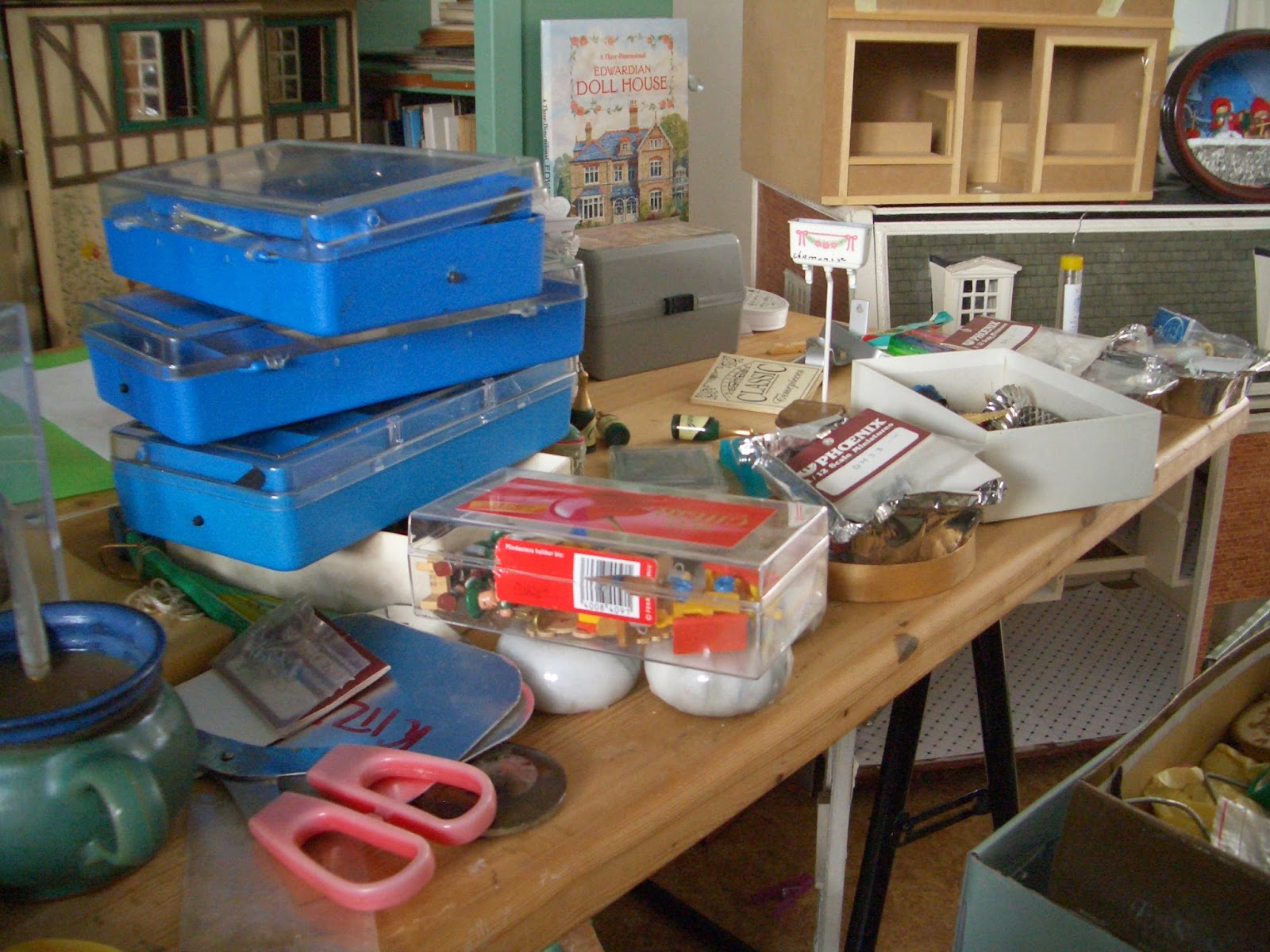 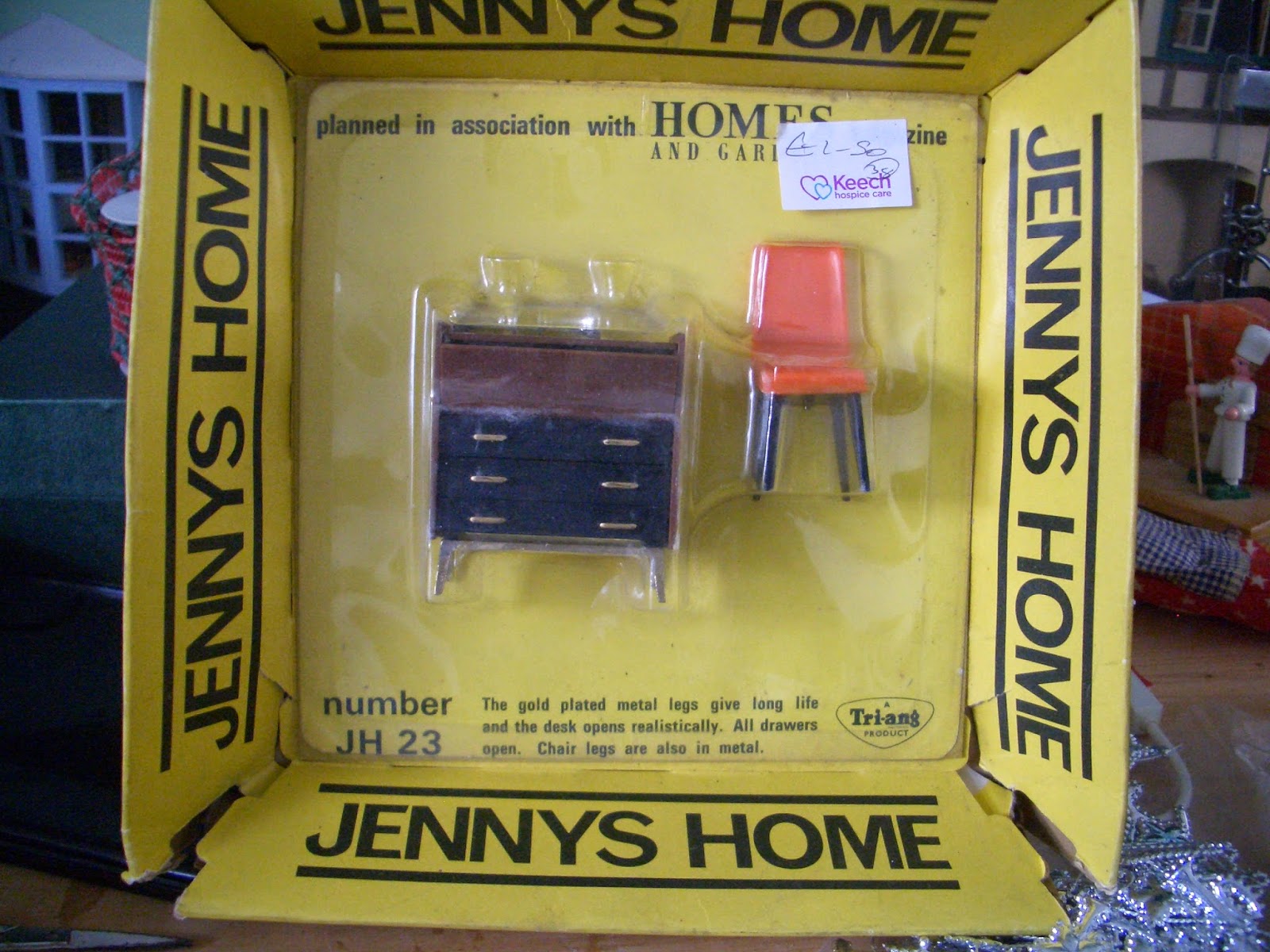 Ah well, I have only myself to blame - I not only spent many hours on ebay whilst in England but I also haunted the local charity shops....

So that was the end of our first couple of days back in Bavorov.   Butterfly has been working wonders not only on the Tudor Inn, but on Susanne's house.   I have been at work on the ballet school (now based in France) and the North London bedsits.   She will be blogging her achievements on Words and Pictures in due course, but not, I think, until after we leave here in two weeks' time.

Watch this space for news from me about "An old house in Paris, that was covered in vines......"    I promise not to leave such a long gap between posts this time.   Thank you for following me so far, and see you again soon I hope.