Oh my goodness, since I last posted on 2nd September so much has happened that the title of this post is well chosen.   I can barely remember what I was doing in Small Worlds before I set off back to England.   And the title also cunningly covers the current challenge at Our Creative Corner, one of the craft blogs that I do keep a weather eye on, since there is a heavy family involvement - you might like to take a peek at it.   And perhaps even have a go at the Challenge?   You have until 28th September to get your entry in.   Since this post covers several things I had forgotten about I shall cheekily pop in an entry too.

I just read through my last post and noticed that I promised to be back with you "towards the end of the week" so I apologise for not making it.  But since then I have "zazimovated" the house (apparently there is an American term for this process: "to winterize"), driven halfway across Europe, staying with some wonderful new friends en route,(not the dolls, though there were many in the house, but the lady in picture nine) arrived back in the UK only to get caught up in the Dartford Crossing closure, thus turning an easy one and a half hour journey on the M20 and M25 into a four hour one through the centre of London, viewed 17 properties to rent in the space of four days, settled on one we love, met with the landlord to clinch the deal, and started the house-packing in real earnest.   So maybe you will forgive me for the delay!


So back to the breadbins......I think we will look at the stable this week.

The idea of having something horse-related in Small Worlds was as a direct result of inviting the class of my friend Jana - remember her from the Opening Day? - to visit the museum as a group.   I needed to find out how many children I could cope with at once, because next year I should like to offer group visits to local schools.   So Jana's class of ten and eleven year old children was an obvious guinea pig.   I learned a lot about managing a big group and they gave me some good and willing feedback on the spot.   I also asked Jana to let them expand on that when I was not around so that they could be freer with their comments.

In general they had much enjoyed their visit but, predictably, the boys wanted more things of interest to them - again, watch this space - and several of the girls wanted something to do with horses.

I already had plans for a smithy but I also started looking out for stables on ebay in Britain and Germany.   It was after several that I had had my eye on went for what I felt were exorbitant prices, that I realised I had no need to buy anything - a breadbin would make a perfect stable.   No shortage of breadbins in Small Worlds!   I buy every one that I see at a carboot sale.....

So armed with an empty breadbin, I started to gather the makings of a stable interior.   First of all I needed horses of course.   I had one already - a relic of Butterfly's childhood, a Pippa pony.   I imagine that will bring back memories for some of you, it certainly did for me when I found it. 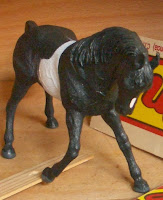 I had also bought a couple of horses in Czech toy shops - a somewhat spirited steed in black and white who took my fancy, and a rather tamer roan coloured one. 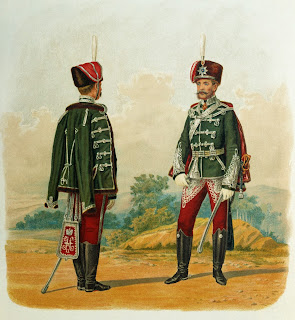 But before I had even started the stable I had a visit from an elderly lady and her granddaughter.  On getting into conversation with them I discovered that the latter was an avid collector of model horses, both Schleich and Breyer, and many others.   She offered to bring me some she no longer needed; I was delighted when her troop arrived before the stable had been completed.   I say troop advisedly - it turned out that her great-grandfather had been a Hussar, which I found very exciting. 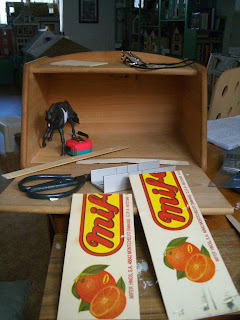 In the end the black and white horse didn't make it into the stable - he was replaced by one of the Hussar troop who has a very sweet face.

The horses would clearly need stalls and here the ever-useful orange crates came into play.   I didn't want oranges visible in my stable so I cut some end pieces of crate and then joined two bits back to back to make the stalls.

I was somewhat handicapped throughout this process in that I know nothing at all about horses, riding or stables so a lot of googling went on to find out how various things looked.   I suspect most of the things I made have some sort of technical name - for example the things on the wall in which the fodder (ooh look, a technical word, not sure if you can apply it to horses though) sits.   I had one stray hair curler - also long forgotten - which I thought would work well to hold the hay. 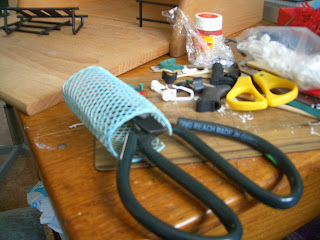 It had to be cut in half and painted brown, and I hunted in vain through the local shops for a second one since I needed three feeders.   No one sells hair curlers like that anymore!  Even my hairdresser, whose premises are right outside the back entrance to Small Worlds, couldn't help.

So in the end I resorted to a strange plastic object which came in a packet together with a miniature skateboard from one of our favourite cheapie shops - remember my clock?  I have no idea what it is meant to be, some sort of bicycle stand perhaps? 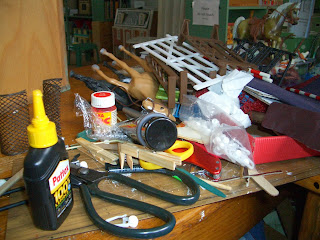 You can see in this next photo that I am not the tidiest of crafters - everything I am using, plus all the glues and tools, seem to end up in one chaotic heap, however hard I try to keep things tidy.

Once I had the stalls in place, and the feeders on the wall, I had to think about keeping the horses in.   The left and right hand stalls were easy to provide gates for - I used the grates of two metal ashtrays made in the shape of fireplaces.   And helpfully the places to rest cigarettes on made very handy hinges to fasten the gates to the wall.

The centre gate was rather more difficult but in the end my trusty party poppers once again came to the rescue, together with some kebab sticks painted black.  I experimented with straws first  but they weren't really strong enough.

So with the inside more or less sorted I turned my attention to outdoors.   The tricky thing with using the flap of a breadbin to provide a further display area is that everything has to be placed so that it does not crash into anything inside. It then has to be glued down very firmly.

The whole point of a breadbin is the big reveal, when one opens the lid and an ordinary household object turns out to be housing a miniature secret.....

I decided that the horses would need a source of water, and possibly some other animals to keep them company.   I looked around Small Worlds for the makings of a granite trough, such as I have in my fullsize garden.    (One of my rooms used to be the cowshed and I inherited four wonderful granite troughs.   I don't think my builders thought they were so wonderful once they had moved them all three times....). 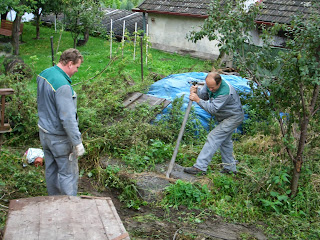 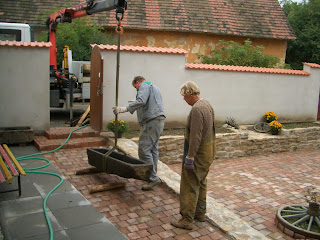 I came up with some assorted bathtubs - somewhat lighter than the troughs that my poor builders had to deal with.....

I chose the wooden one on the left and proceeded to coat it with a mixture of glue, sand, polyfilla, grey paint and a few scatterings of moss so that it ended up like this:

I then stuck a large sheet of sandpaper over the whole flap and spent quite a long time placing all the items in the most suitable places.   One cat gave me a lot of trouble.   I wanted a confrontation between the two cats, but could I place them so that one didn't knock over the centre gate when I closed the lid?

No I couldn't, so in the end one found its way onto the trough and that worked.

One of the difficulties when doing this placing and gluing is that it is almost impossible to temporarily stick heavy items down in order to test out whether the flap will close properly.   The whole process involves a great deal of swearing......

But in the end I was quite pleased with the result and the stable is an undoubted hit with everyone who sees it.   It has the wow factor - except that Czechs don't say "wow", they let out a long drawn out sighing sound of pleasure that I don't believe can actually be written in English unless one can use phonetics.

I am not likely to write another post until our house
move has been completed which will, fingers crossed, be in just one month's time.   But I hope to see you again then.   In the meantime thank you for continuing to follow this journey.
Posted by Cestina at 23:52