Or perhaps more to the point - how to thatch?

The house in question is big and once upon a time was very hairy.... 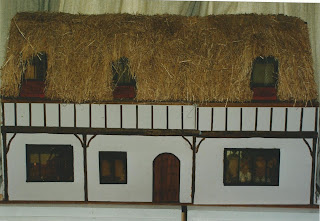 I bought it at an auction more years ago than I care to remember and I have always suspected that it was made by a man with more enthusiasm than knowledge of thatching.   One day his wife almost certainly lost patience with the constant clearing up of the straw that was being shed all the time from that very hairy roof and I imagine that she snapped at him "It's the house or me - get rid of it!" 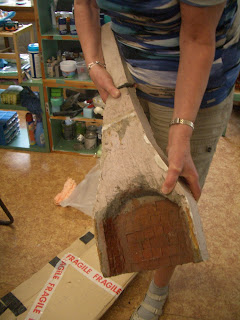 Inside and out are both delightful and the only other flaw was the extraordinary chimney.  Although the house is big and unwieldy, it's fairly light, unlike the chimney which is made of concrete and weighs more than the whole house....

The chimney was carefully packed to bring it to the Czech Republic, not because we actually wanted to keep it - it wavered dangerously at the back of the house, threatening to fall off every time we needed to shift the whole thing, so in the end we wrenched it off - but because we planned to use it as a pattern for the new chimney, due to be made of chunky polystyrene.

When Butterfly and I were working on the houses from March to May this year we had a lot of help from our friends and family, as followers of our blogs will know.   However I haven't yet revealed that we actually had a little list, in four columns, headed "Unskilled", "Semi-Skilled", "Skilled" and "Highly Skilled".   Each column had a list of tasks and another list of people.

Not many made it onto the "Highly Skilled" list (I wouldn't place myself on it, though Butterfly would qualify).   One person who did get onto it is a very old friend of mine from Holland, who is a retired art and craft teacher and who, together with the rest of her family, restored their full-size 17th century house in Dordrecht.   I know from years of experience that Irmel can turn her hand to anything.

I was delighted when she agreed to come to Bavorov for just over a week, to help with the setting up of Small Worlds.   Because on the Highly Skilled list was the task of rethatching the large cottage.   Every time Butterfly or I glanced across at it, we sat back happily thinking "We can leave that to Irmel...."

She came with an added bonus - a friend from their archaeology group who, it turned out, is a problem-solver par excellence.   I was fascinated to see that Bep, who has never worked with miniatures (though clearly is used to painstaking work with old objects dug up in many pieces) would just listen to what I needed, gather up the materials, and return later with a finished item saying "Is this what you want?". She worked on reconstructing dolls, rebuilt and restrung puppets (seen here with the partially finished polystyrene chimney), created costumes for the dance-school-to-be, restored tiny filthy dresses which I had been ready to chuck out, and all this alongside the major work of helping Irmel with the roof. 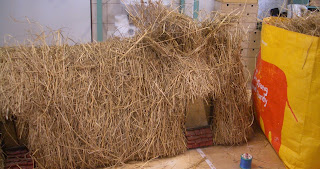 I had gathered up all the articles I could find in magazines and books about thatching miniature roofs.  They ranged from using brown towels, coir or plastic doormats, string, and coir bundles, right back to the straw with which we were all-too-plentifully supplied.

After a few practice runs, and much cogitation, it was decided to reject all fancy modern methods, strip the roof, comb out(!) and reuse the straw. 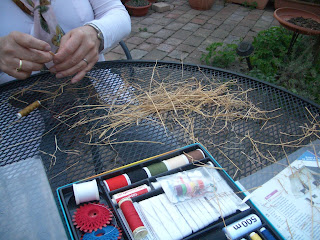 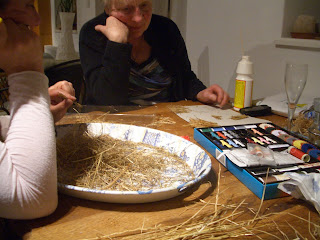 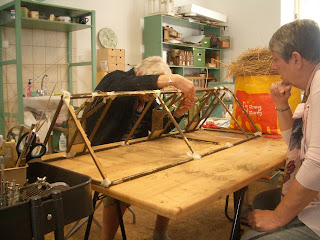 Unfortunately at that point perfectionist Irmel discovered, whilst stabilising the roof, that it had been badly constructed in the first place and needed an additional bay of timbers to make it secure enough to affix the panels bearing the straw.


This involved a trip to the DIY hypermarket in the next town for the appropriate wood and a number of tools that she felt were missing from my collection.   Several hundred Czech korunny lighter we returned to find that Bep had more or less perfected the technique for creating the necessary (very many) bundles of straw which were going to be fixed to the polystyrene panels. 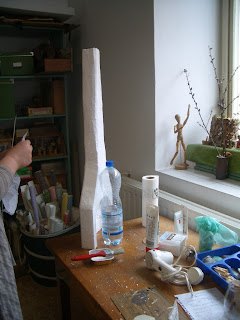 Butterfly had been busy digging out the fireplace area at the bottom of the chimney breast and coating the new chimney with a mix of glue, paint and polyfilla to get the right texture on it. 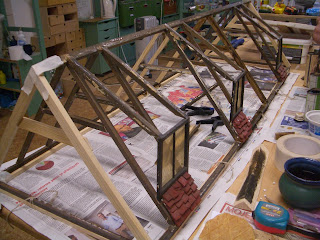 After successfully attaching the extra bay, 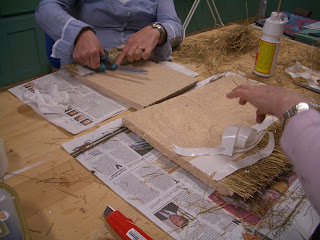 Irmel and Bep worked out the best method of fixing the straw bundles to the painted panels. 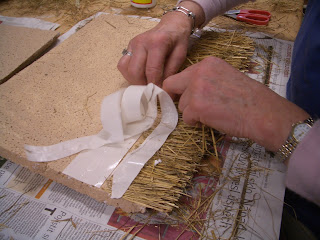 This involved much glue, sticky tape and general mess - old straw is not the easiest material to work with.   Apart from anything else it's quite dusty..... 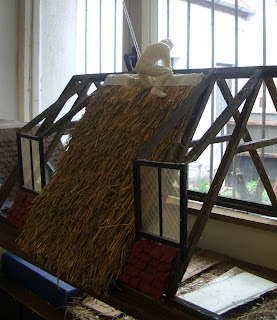 Maybe we should just have left it to the thatcher on the roof? 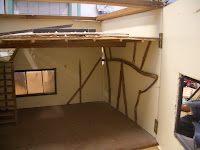 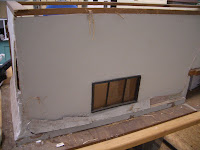 Whilst all this feverish activity was going on I, in my turn, was not standing idly around.  I was simultaneously cleaning and doing some running repairs on the cottage, 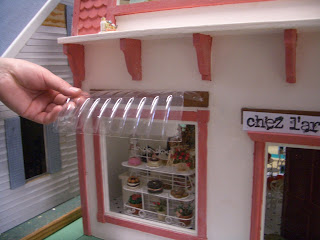 trying (unsuccessfully) to make a blind for the French patisserie, 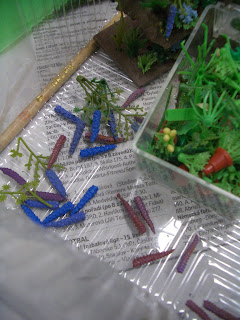 and making a spa scene, complete with wisteria.  (Yes, yes, I know those are really delphiniums - but hanging upside down.....)

Sadly, time ran out on the visitors from Holland and they had to leave with only half the roof thatched.   A blessing in disguise actually because, since the house stands on a windowsill, it means that the light comes in just where one wants it.   So it's just as well that the thatcher is one of the slowest workmen I have ever met....

I leave you with some photos of the now inhabited house.   We tell visitors to Small Worlds that it is an international commune - a typical English cottage,


inhabited downstairs by a large community of  Czech cornhusk dolls and upstairs a couple of German wooden dolls, grossly out of scale, but matching the giant furniture up there.

Remember you can click on the images to make them bigger.....

I hope you have enjoyed this further trip into Small Worlds - thank you for following and I look forward to seeing you again towards the end of the month when I hope to show you another display window.
Posted by Cestina at 22:25