Part two of the holiday window coming up....


The thermometer hit 42 degrees (107F) in my courtyard yesterday and I very much wished I could teleport myself to the seaside somewhere!   Instead I shall have to make do with this mini-version.... 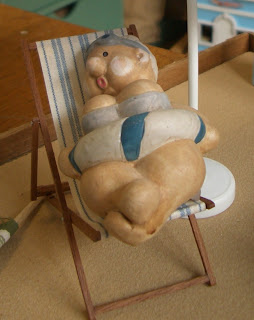 I have had a beach scene in mind for many years, ever since coming across this very Beryl Cook-like lady on my travels.   And the idea was boosted a couple of years later by the gift of two beautiful deckchairs from my sister-in-law Mette. Madam is now reclining on one of them - her original chair was nothing like as beautiful.


The trigger for starting on the beach scene was, as you may have read in the last post, the imminent arrival of Czech TV to film Small Worlds.   For those interested, this is the link to the actual broadcast, which went out on 21st July - it has already triggered quite a number of visitors.   Our local castle is at ca 14minutes into the programme , Bavorov's beautiful baroque church comes at around 16/17minutes with the local manor house immediately after that, followed by a tiny scrap of Small Worlds - blink and you have missed it!

I decided that I wanted most things on the beach to match the colour I already had which was blue.   So, since the only sun umbrella in Small Worlds is a rather ugly brown one by Lundby, I thought I would have a go at using it as a model to create a blue striped one.

This proved to be rather more fiddly than I had expected.... 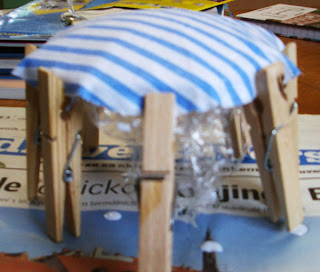 The striped bit worked fine - I laid clingfilm over the brown one, dipped my stripy material in diluted white glue, draped it over the clingfilm and anchored it into place with clothes pegs - no miniaturist can function without these amazing tools! 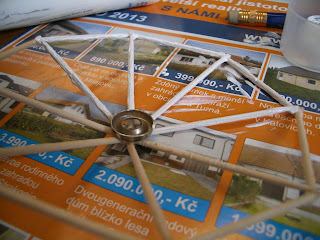 The spokes were rather trickier, toothpicks (equally important tools for the miniaturist), painted white, and attached to some sort of press stud. Trouble was, the whole thing kept moving around but I decided that total accuracy was not necessary since the only way one would be able to see underneath would be by lying down next to Madam. 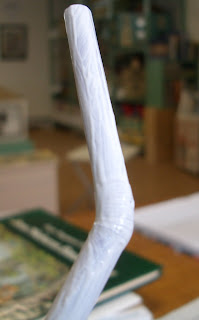 I attempted to make the stand with a bendy straw but gave up in the end and decided to use the white stand thoughtfully provided by Lundby...... 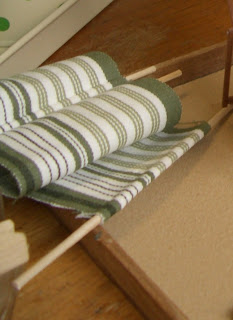 With that out of the way I spent rather a long time making a windbreak, green rather than blue, too short to start with so an extra bit had to be added.   Then having made it, I completely forgot to include it in the beach scene when I assembled it.   But it did find a home on the campsite eventually.


So to the beach huts......I decided to turn the photo frames into proper little huts which meant a roof and a floor each, and some side walls.   The back of the photo frames would serve as the back walls. Because I wanted to use foamboard for the walls, I needed to cover them with some form of weatherboarding.   I am too mean to use decent woodstrip on what were going to be more or less temporary structures so I pulled some woven mats to pieces - the strips are of very thin bamboo (I think it's bamboo), about 1 cm wide and we glued them onto the foamboard and then painted them white.  (I had my young helper that week). 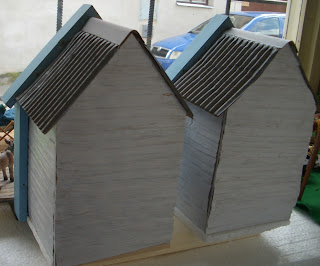 The roofs are made of one of Butterfly's favourite materials, corrugated card - she sneaks some into pretty well every project.   I set my brigadnik to ripping off the useless outer layer and when the walls and floors were in place, we stuck the roofs on and painted them with aluminium paint. 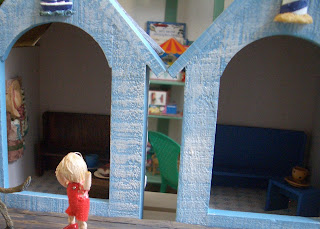 Some suitable lino-style wallpaper onto the floors, a couple of benches and small tables, discarded clothes hung on the walls and a cup of tea on each table and the rather sparsely furnished huts were done. 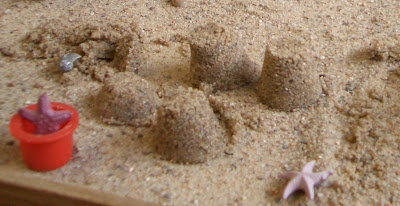 So then it was just the beach itself that needed to be sanded (note different use of verb "to sand" something).   Although I did actually in fact mainly use sandpaper to do it.....I laid down a sheet of sandpaper and then scattered some real sand over the top.  A while back I bought a tube of something called "Sand Hardener" in that wonderful shop "The Range" - my daughter-in-law often invokes it - with no real idea of what to use it for.   However I thought we might be able to make a sandcastle.   Far too ambitious I fear but we did manage a few tipped up buckets of sand that obediently hardened overnight.   We also threw a few tiny shells around and then all that was left was to add the human interest.....(the starfish were little "silver" charms off a bracelet from the Czech equivalent of a pound shop, Kik).

Madam was already cornering the best bit of the beach, close to the hut with a cup of tea to hand.   She was joined on the other beautiful deckchair by a man who clearly dwells in the past.   I dithered a bit about clothing him in the Edwardian swimming costume but it had been so lovingly knitting by one of my friends, Sheila Randall, whose husband Norman has been mentioned in other posts as the builder of several of my houses, that I decided it really deserved an airing.  And here's a contemporary version of the title song to keep the outfit company. 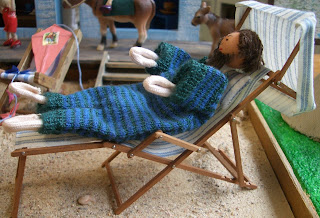 Yes, yes, I can see I need to do something about his feet and hands. Maybe they will look better when he has caught the sun a bit. 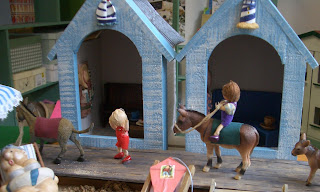 Oh my goodness, I have forgotten all about the Boardwalk (cue a favourite song).   I needed one in front of the huts so that there could be that very English beach thing of donkey rides.   So more dismantling of woven mats which worked just as well there as on the huts.   I held the donkeys back from the farm scene and since one of them looked as if he was making off as fast as he could, I let him do just that.   Who am I to argue with a donkey? (Butterfly will tell you just how unpleasant they can be....) The redundant steps from the Japanese house/garden lead down onto the actual beach.

To finish with, a few photos of the whole scene - 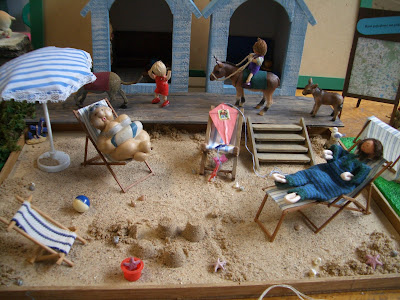 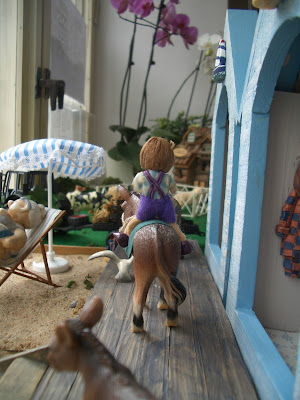 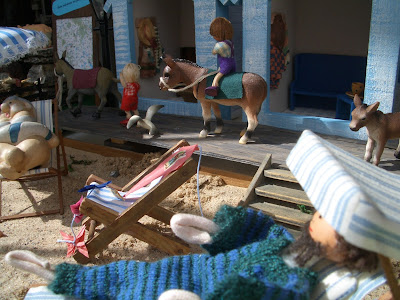 I hope you have enjoyed your day by the seaside.   There is sadly no coast here in Bohemia, despite what Shakespeare might have thought, so it will be a while before I see the real sea again.

Thank you for staying with me so far. I hope you will join me again for the last of our holiday adventures when we will go camping - in miniature.