I have just realised that it is just a year since I started this blog to keep track of my journey towards a dolls house museum of my very own in the Czech Republic - the first post was published on 26.6.2012.   To me it feels as if I have been blogging for ever! 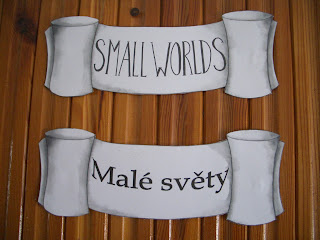 This post, which celebrates the actual opening of Small Worlds/Malé světy to the general public, seems the right place to thank all those without whom this journey would simply not have been possible. 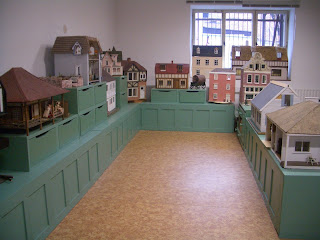 Because when I look round Small Worlds as it is today, and think back to last autumn and then again to March this year, I am amazed at what we have managed to accomplish in the time. 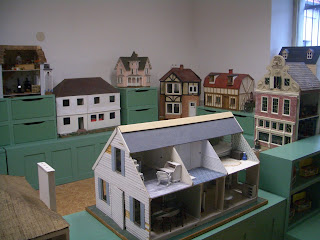 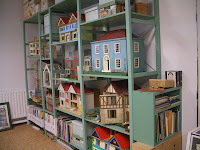 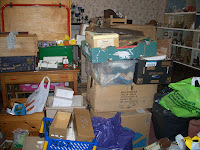 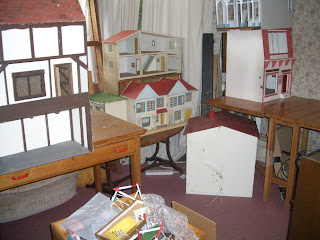 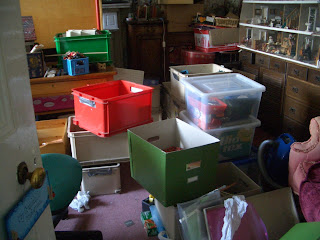 They were taken back in the autumn when I thought we would never emerge from the chaos.  Thanks to the sterling help of friend Lynda, some sort of order did finally triumph. Thank you Lynda..... 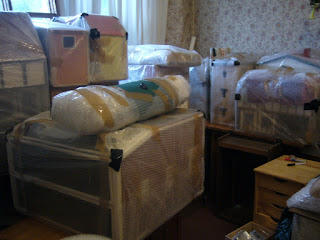 And then all the houses and hundreds of shoe boxes were lovingly (?) wrapped by my son and daughter and packed, 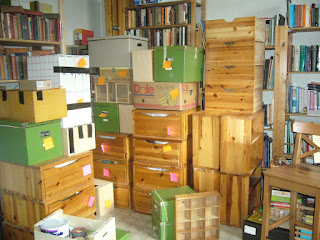 along with all the cupboards and drawers which the houses would be standing on,  into a van to trundle across Europe, courtesy of two more friends, to be decanted in neat piles around the newly decorated room. 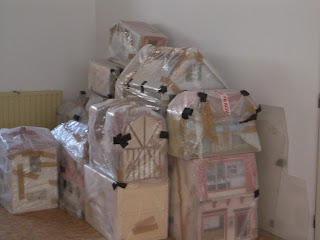 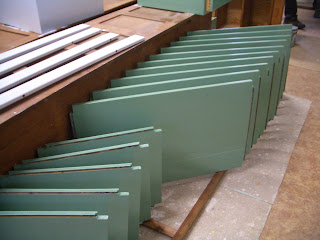 Thanks to the speed of the carpenter and painter here (deeply impressive to someone used to the much more laid back style of the English -catch a painter there starting at 5am - all the cupboards and shelves were adapted and painted before I left for the UK in November.

So when Butterfly and I arrived in March all we had to do was sort the enormous pile of heaven knows what collected over forty years  that I had refused to throw away "because it might come in useful one day", unpack all the houses, renovate a goodly number of them after their sojourn of twelve years in the spider-filled garage, and get set up for the Open Day on May 11th before heading back to the UK that same night........

Along the way we were helped by my sister-in-law Mette, who came over for four days just to sew a fine seam, Irmel and Bep from Holland who taught themselves to thatch a cottage roof (and did many other things as well) and by two Janas who as "unskilled labour" uncomplainingly cleaned the filthiest of houses.....Tak Mette, dank u wel Irmel en Bep, diky moc Jana x2.....

And then there was all the "intellectual" stuff, which includes, in my head, the artwork for Small Worlds - thank you Laura - I love the house logo and the banner; the text for the flyers - and indeed the name Small Worlds - thank you Ruth; the translating of blogposts, flyers, letters to the mayor, house labels, in fact everything that has to be correct rather than be in what has been termed my "darling Czech".   Thank you Heli, Jana, Jana, Mirka, Veronika.

The Bethnal Green Museum of Childhood is without peer in my book so support from a former curator was hugely welcome - thank you Noreen.   And thank you Andrea for two sparkling ideas which are now taking shape in Small Worlds.   The mouses' saga is yours alone and the ballet school is yet to come.....

And last, but hugely important, the technical stuff on the computer and the negotiating with the print company - thank you Mel (particularly for your unending patience when I yet again forget how to make the banner go where I want it to and lose the damn file....).

It would have been fantastic to have had all those people at the Official Opening on Saturday to thank them in person.   But although none of the "overseas" contingent could be there I was delighted that all the Czech ones were.   It was a glorious day and I think that kept the numbers down a bit - we have had such dreadful weather lately that people grabbed the chance of working in their gardens - but it was a lovely occasion. 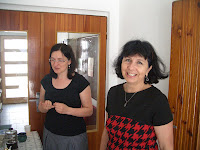 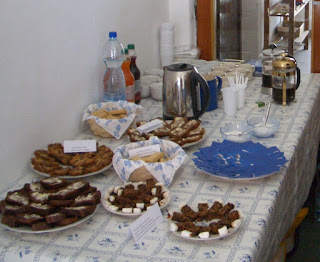 We (thank you again, Janas, for the crack of dawn stuff) served coffee and assorted goodies from across the Channel - Irish Whiskey Cake, Yorkshire Tea Bread, English Malt Loaf and Scottish shortbread. (I'm afraid I chickened out of making Welsh Griddle Cakes for a clean sweep).  They were all duly labelled which made for an animated discussion with the translators the night before - one can't apparently say something as simple as "Irish Whiskey Cake" in Czech......

Three people were running round with cameras but I only have the photos from my own and since some of them are just me, and the others are the houses you have already seen, there is a dearth of pictures of the event! 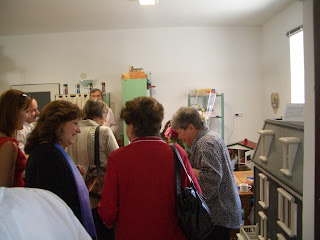 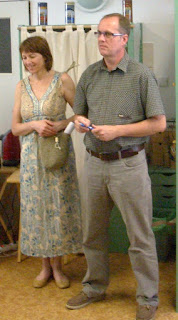 I said some words (in darling Czech) to thank not only all the people I have mentioned above but also the town of Bavorov for its support;  the Mayor also said some words (in proper Czech - at least I assume so), and I got lots of presents which I had simply not expected.

The wine, chocolates and flowers have made their way to my house, the beautiful orchids are gracing the windowsill in Small Worlds and look enchanting. 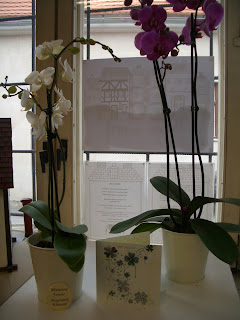 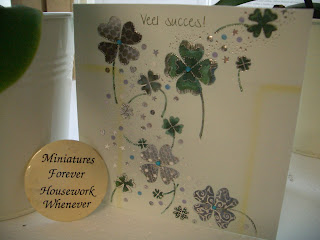 So another stage of the journey has been successfully accomplished, thank you for travelling with me so far and I hope that I will still have your company along this road, wherever it leads....
Posted by Cestina at 23:20