Mice on the move - houses too.

Much action in Small Worlds in the past two days.   The mice, having sent in an advance party to choose the soft furnishings for their new home, have arrived in full force to take up residence.   And the houses have all been on the move as well.

First the mice - you may remember this house 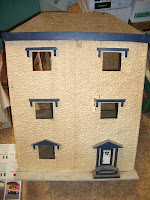 which stripped down to a tasteful brown, revealing the teeny, tiny front door, much smaller than any of the windows.   It has now undergone a complete makeover, which you can catch glimpses of in photos later in the post, though according to Butterfly it still needs another strip of differently coloured bricks part way up to finish it off.   (She painstakingly made a bay window since we were one window short.  There was some swearing when a fifth matching window emerged from a box this afternoon......) 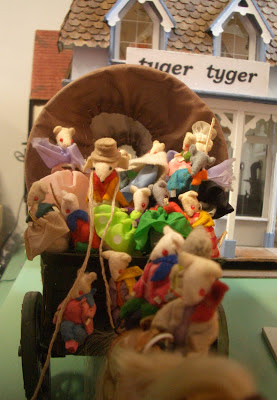 Once the advance party - clearly consisting of the staff since they are all in some sort of uniform, had chosen the curtains, carpets and bedding, it was time for the main party to arrive, which they did in style, and in something of a rush, as you can see. 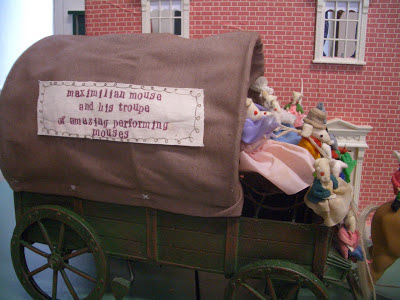 They pulled up smartly, right by the new front door (and hiding the bay window - photo to come) and got ready to take possession of their new home. 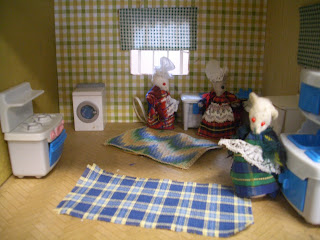 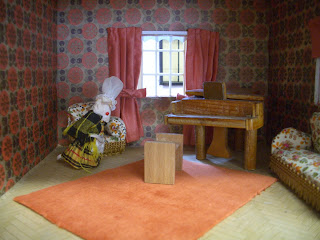 Inside the servants had been very busy, putting up curtains and blinds and laying down rugs on the newly polished floors. 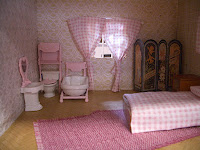 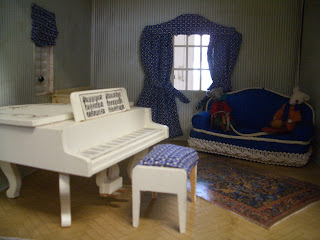 I suspect that the two lounging on the sofa in the French Drawing Room are troublesome teenage mice that Maximilian had not wanted to be bothered with on the journey.


Maximilian is of course a very famous mouse, who after retiring from a career in the bull-fighting ring, formed the troupe of performing mice who are about to take up residence here.   You will note he now wears a yellow tailcoat, not a red dressing gown.....

You will undoubtedly be hearing more of this famous troupe of performing mouses - for example, there may be trouble ahead if the hitchhiking pigs, clearly on the run from that pesky wolf, actually succeed in moving in..... 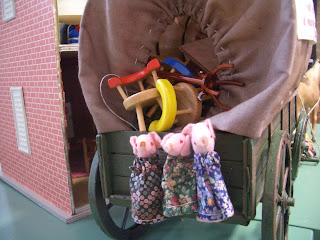 Whilst mouse-moving was going on, Butterfly and I were moving things in the real world, shifting out of workspace mode into a display set-up ready for the Open Day on Saturday.   This, of course, involved a great deal of chaos again, as things from our beautiful working shelves were bundled into fruit boxes whilst we tried to squeeze a quart of tools and paint into a pint pot of space.  Or temporarily into what will become the Children's Corner..... 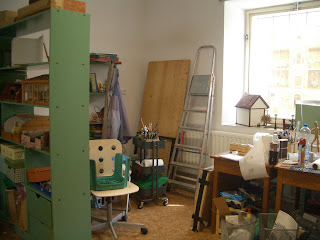 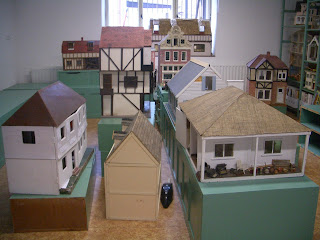 Today the houses, the drawers they were standing on and, in the end, one of the giant ex-BBC cupboards, were all on the move.   Butterfly excelled herself with much "heaving and hoving" as my then-four-year-old granddaughter once described it.   At one point the previously tidy room had barely one house in its original position and surplus drawers all over the place.

But by the end of an exhausting day, everything had found a suitable place 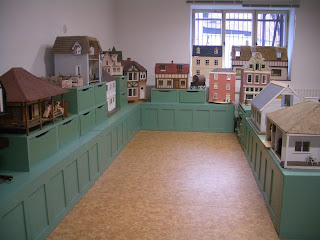 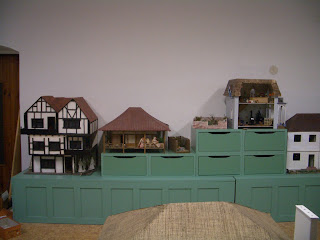 and the big Walmer Victorian dolls house - its redecoration will be fully described in a coming post - has taken up its position by the entrance door, with the large department store-to-be surprisingly ending up in front of the door to the "facilities", as the Czechs neatly describe them.   Fortunately the store is on castors.....Photos of these when everything is tidily in place.

And finally the frog-infested woodland window display has been removed, and the window covered ready for a grand reveal of the new display later in the week.   One of my readers will certainly recognise the house on the poster! 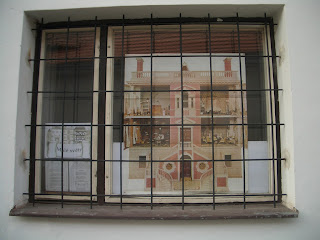 Thank you for following the journey so far - please stay with me for further adventures.......