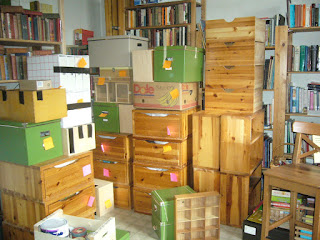 It's been a slightly nerve-wracking few days.   On Tuesday morning the friends driving the dolls houses and display units over to the Czech Republic arrived in Hoddesdon, picked up the van, and then spent a tough four hours or so loading it ready to head off to the midnight boat from Dover to Dunkirk.   My stalwart children had prepared everything like a military operation, right down to labelling each of the heavy pine drawers which then had to be reinserted into the giant ex-BBC oak cupboards in which they were travelling. 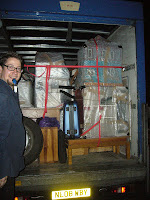 After about four hours of heavy lifting, and some animated discussion when it came to the final stages of getting the dolls houses themselves into safe positions, all was ready for departure. Though son has the van keys triumphantly between his teeth, I suspect he is somewhat relieved that he isn't the one facing fifteen to twenty hours of driving before getting to the other end.

In the meantime, in another country, I was getting the occasional question via Skype about whether something really needed to come, or could this house stand on top of that one?   In general, I was very happy to be here and not there!   (Those loading will have been pleased about that too.....)

Once the van had safely departed I revealed to those left behind that the last time I had crossed, 3 weeks or so ago, I had for the very first time in many crossings been pulled into the Customs Shed in Dover for a random check on my way out of the UK.   I have no clue what Customs might be looking for as one leaves the country but on Tuesday night I was having kittens that this might happen to the van. There would then have been no chance at all of catching the boat and in fact I would not have blamed the volunteer drivers for abandoning the whole lot in Dover and disappearing home! 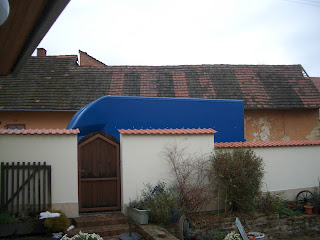 However, all was well, and apart from getting lost about twenty miles from their final destination, the van rolled up last night almost exactly twenty four hours after leaving Hoddesdon.   We left it outside my gates for the night and it was still there, looming over the garden wall, the next morning (good heavens, that's today!) 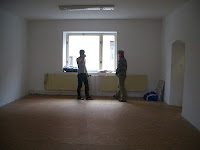 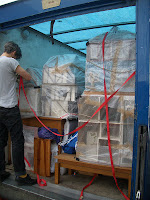 This morning, after a very well-earned sleep-in and a leisurely breakfast, we set off for the museum room and were joined by a Czech friend for the great unloading.   Nothing had shifted at all during transit, a tribute to both the packing and the careful driving across Europe.  There was a short hiatus whilst I went back home to get some scissors to cut the ropes and then unpacking could start in earnest. 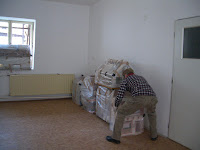 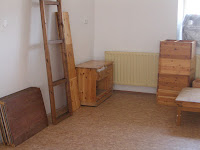 The houses began to take up their places in one corner of the room, and in another, all the wooden shelving and cupboards were stacked ready for a painter to give me a price on turning them into some sort of coherent display furniture.... 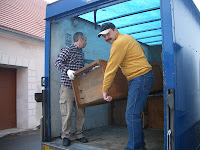 About thirty years ago I bought four giant ex-BBC filing cabinets, with roll down doors, and two ex-BBC oak tables which for many years served as the children's homework desks.   Who would have thought they would all end their lives in a new incarnation in a dolls house museum in the Czech Republic? 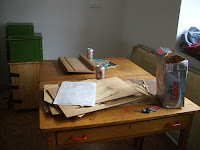 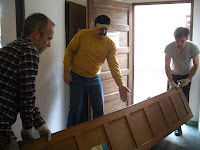 The (massively heavy) oak cupboards just fitted neatly through the doors and will serve in due course, on their sides or fronts, as base units to hold the dolls houses at a reasonable viewing height.   The many pine drawers will then be used to vary the display height of some of the smaller houses.   And will also act as very necessary storage units for working materials and dolls house furniture. 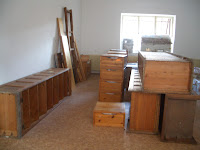 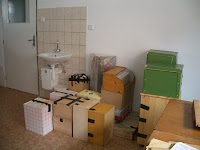 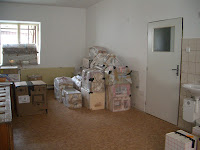 So after an hour and ten minutes work, everything was in the museum room and coherently sorted for the next stage (will these stages ever come to an end???).

When it was all spread out over several rooms in Hoddesdon I had grave doubts that it would all fit into the van.   And once we had it all unloaded into the museum room we looked around and once again marvelled at the miracle of packing that had taken place.   I am so relieved that it is all safely here, and delighted that we didn't opt for the expensive option of a removal firm.   I had been very uneasy about giving the houses into strange hands, however expert. 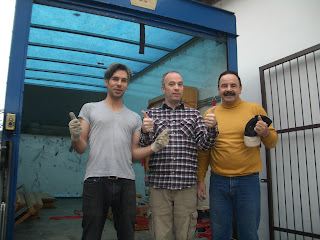 But this could not have happened without Alison and Adam, Paul and Simon.  A massive thank you to all of you - and thank you too to Pavel for adding some Czech help at the end!

My thanks too to those of you who are still following this journey to a mini-museum in the Czech Republic.  I am not sure when the next post will be or what it will be about.   Musings on a name perhaps, and what colour to paint the units....