I am very excited about this house!   Leaving aside all the others, this one would have been worth the trip to the far side of Essex all by itself.

Not long ago I was idly chatting with my daughter about the possibilities of creating a theatre set in Shakespeare's time -  one located in the courtyard of an inn of that period.   And then this house came along - serendipity strikes again.  Of course, so far there is no courtyard for the stage to go in but time and some hard work can soon alter that! 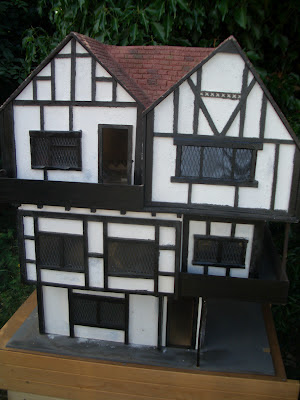 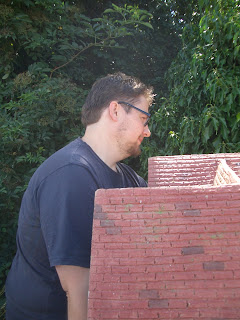 This is a really big house, and beautifully detailed, although needing quite a bit of finishing still, especially inside.   You should be able to get an idea of the size from this photo of my son manoeuvring it into the garage.  If you click on the photo you can zoom in to a close-up of the roof which looks as if it has been applied in much the same way as the brickwork on the first house I described when I began this blog - the Dutch House. 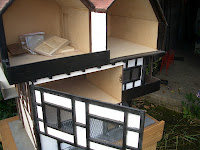 I haven't yet fully explored in how many places it opens.   The front comes off the top floor in two pieces and the next floor down is hinged in at least one place, possibly more, as is the ground floor.


It's possible to open up the whole house in various ways. 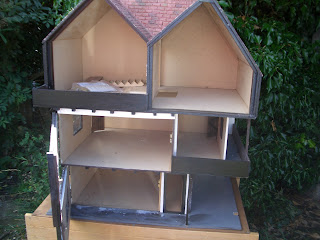 One thing it needs badly is aging.   So how very useful that my daughter is about to do the Timeworn Techniques course run on-line by Andy Skinner. 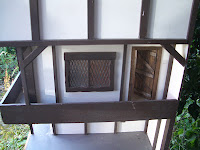 It has nicely detailed windows, a small balcony, and a supply of panelled doors, most of them lying inside the house at the moment.   Even the back of the house is "timber-framed" but there it is painted on rather than proper wood.

Below the balcony there is a veranda which could later form the link to a courtyard....... I expect one day to see William Shakespeare himself looking on from the shelter of the overhanging roof whilst one of his plays - Henry IV Part 1 perhaps - is staged for the very first time.....

And finally, in a tiny whisper, I have to confess that I bought another dolls house on ebay last week.....£8.55 this time.   More will be revealed when we have hauled it out of the car and made a space for it to be photographed.

Thank you so much for joining me in a further stage of my journey to a museum of my very own.   It's getting closer.   Phone calls to van hire companies are on the list for this week so that I can sort out a way of getting the houses from the garage at the bottom of my English garden to the room in the Czech Republic.   Though before they set off I had better check that the room has been decorated and is ready and waiting to receive them......