After the last post's digression into the melodramatic backstory of the house that is clearly now fated to become a ballet school, normal service is being resumed.

It is therefore time to expand on the tiny glimpse you previously got of house number 5 - and here it is: 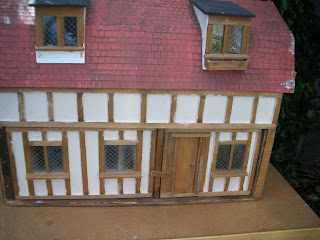 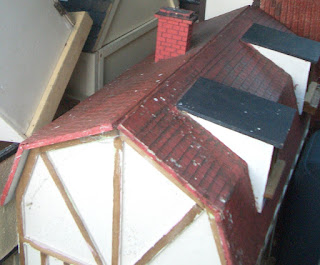 Above is the view from the front and on the right is one from the side, taken while the house was safely tucked into the back of the car, alongside its peers.

Again, it is quite large. definitely twelfth scale. 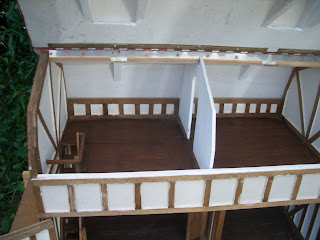 It opens in three places, which is always better than just a front opening because it gives much greater flexibility in use.   The roof lifts up, revealing two big, half-timbered rooms, with a door between them.   It's annoying when dolls house makers not only assume that a house's inhabitants can not only fly from floor to floor but also walk through walls!   So it is satisfying to find both doors and stairs in this house.   And, indeed, rather nice specimens of both. 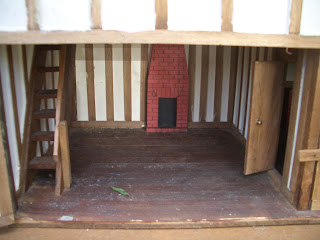 Downstairs there are once again two rooms, with an "oak" door between them.   Just one of the rooms can be seen here;  the second room is slightly smaller and of course has no staircase running up out of it.

The house is very solidly built, it has a nice feel to it and when opened up it looks like this: 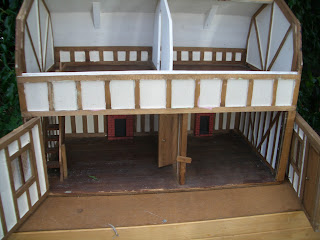 As soon as we unloaded it from the car, daughter and I both thought "farmhouse" and foreign farmhouse at that.   I think maybe Danish or North German, she is thinking Czech.   I need to do some research before deciding exactly which country to base it in but the research is always a fun part of this hobby.   I learned a great deal about how the Japanese live when making my Japanese bungalow.....and one day there will also be a Colonial bungalow based in some part of either Africa or India.   At the moment that particular house is painted bright orange and looks repulsive.  But its day will also come!

And now for that tantalising glimpse of the final house in the Essex Haul.   This is the one I am probably most excited about...... 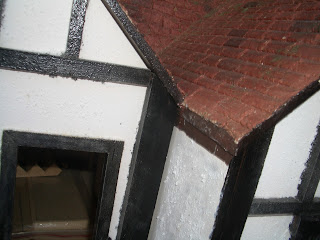 Yes, it's another timber-framed one, but just wait till you see it!

Thank you for visiting Cestina's Dolls Houses today and I hope you will stay with me for more of the journey towards a dolls house museum of my very own.