I am so excited!   Those of you who have been following this journey will know that right at the end of our stay in the Czech Republic I succumbed to an ebay offer of six dolls houses somewhere in Essex.   I had intended to just bid up to £25 - the start price was £10 - but I was watching the auction into the last seconds and decided to push up my bid to £35.55.  Which was enough!

We got back to Hoddesdon in the early hours of Friday morning and on Sunday I set off for Manningtree in Essex to collect my purchases.   Manningtree is almost as far from "our" Essex border as it is possible to get but I have an old friend in nearby Clacton so I was happy to kill two birds with one stone and pay her a visit at the same time.

I was greeted by the seller's father, who had been deputed to stand in for his son, with the words "You'll never get them in the car".   Anyone who knows me will realise that I regard that as a challenge - I have rarely had to leave anything behind in the many car-laden journeys I make to the Czech Republic and back.   Granted there is usually no chink of light to be seen in the rear of the car.   There was increased border security as we arrived in the UK on Friday and the very polite young border control officer expressed surprise at not being able to shine her torch from one side of the car to the other.   Rather like the German customs officer who pulled me over one November when I was travelling back to England with many Christmas presents. He too peered in, let out a loud "Im Gotteswillen!" and waved me through.

I wasn't worried by the remark that I would not be able to get them in but I could only stare in amazement at my haul, all stacked ready in the garage.   It was far, far better than I could have hoped.   The next few blog posts will be mainly photos so that you can see what I have acquired, with one or two thoughts about what they might turn into.   If anyone wants to throw in some suggestions for each house then please feel free to do so - it will be quite a while before we can get round to renovating them. 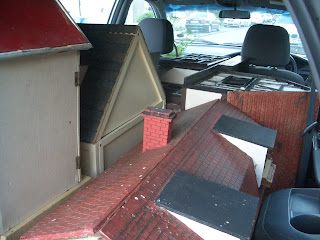 Here they are neatly tucked in the car, very kindly and successfully loaded by the somewhat surprised father.   One roof had to come off but I actually had a lot of rear vision which is just as well as I also had to collect a large number of items on the way home, ready for my son's wedding on this coming Saturday. 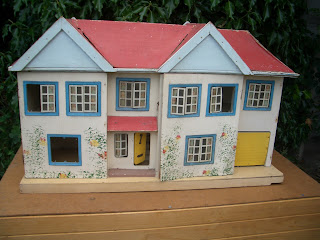 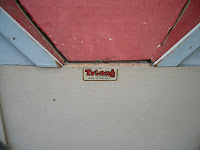 There was indeed a Triang house amongst the six.   Sadly it is the one that has suffered most from getting damp.  I have two or three other Triangs and although I am not particularly interested in collecting them it will be quite satisfying to put my new acquisition next to this much older, slightly smaller version which I already possess. 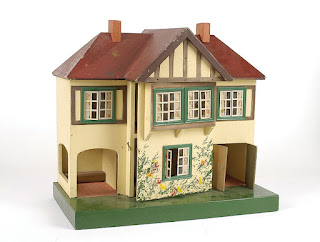 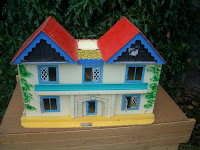 The least interesting house of the six is this little one but it might do as one of those for sale in the Czech Republic.   I have a feeling there is another very similar one buried in my garage somewhere. 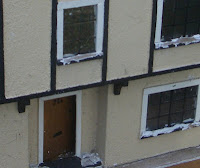 And to tantalise you a little, here is just a glimpse of the subject of the next post.......

I hope to see you all again soon - thank you for staying with me on this journey.