Or even better - Bomber's Pomsta.   Isn't "pomsta" a wonderful word?   I was enchanted to find from some Czech visitors that it is the Czech for "revenge".   I was trying to explain to them, as they struggled with the pronunciation,  why I had so meanly named my 1914 department store "Gosthwaites of Aberystwyth".

"It's in return" I explained, "for all the impossibly tricky Czech words I have had to master over the past years.   Words such as střevíčky, křtění, pryskyřice,  překližka and lichořeřišnice...." The ř sound is one of the trickiest to get your tongue round - apparently it is exclusive to Czech. In this short clip you can not only hear it, but also gather some of the delights of an inflected language where the nouns change according to their role in a sentence.

It's a fair exchange though -  the English "th" is a pit into which many non-native speakers of the language fall; if you then add a "w" or two, which in most other languages is pronounced as a "v", the pomsta is complete.

But enough of that and on to the creation of Gosthwaites itself. This will be another two-parter. The exterior today, and the interior to follow shortly. I bought the house about two years ago, for £8 on ebay. That was a lucky month - it was about then I also acquired the Essex Haul.

Friends kindly collected it for me and as we manoeuvred it from one car to the other bits began to fall off. This was a sign of things to come - the construction had not been well done and as I worked on it intermittently over the two years since its acquisition, more bits came adrift, the windows disintegrated, the front opening doors caused endless problems and hinged roof was a disaster.

But as soon as I saw the house, despite all its flaws, I knew at once that it was destined to become a department store. In fact I see that I even labelled the two first photos "Future department store"...... 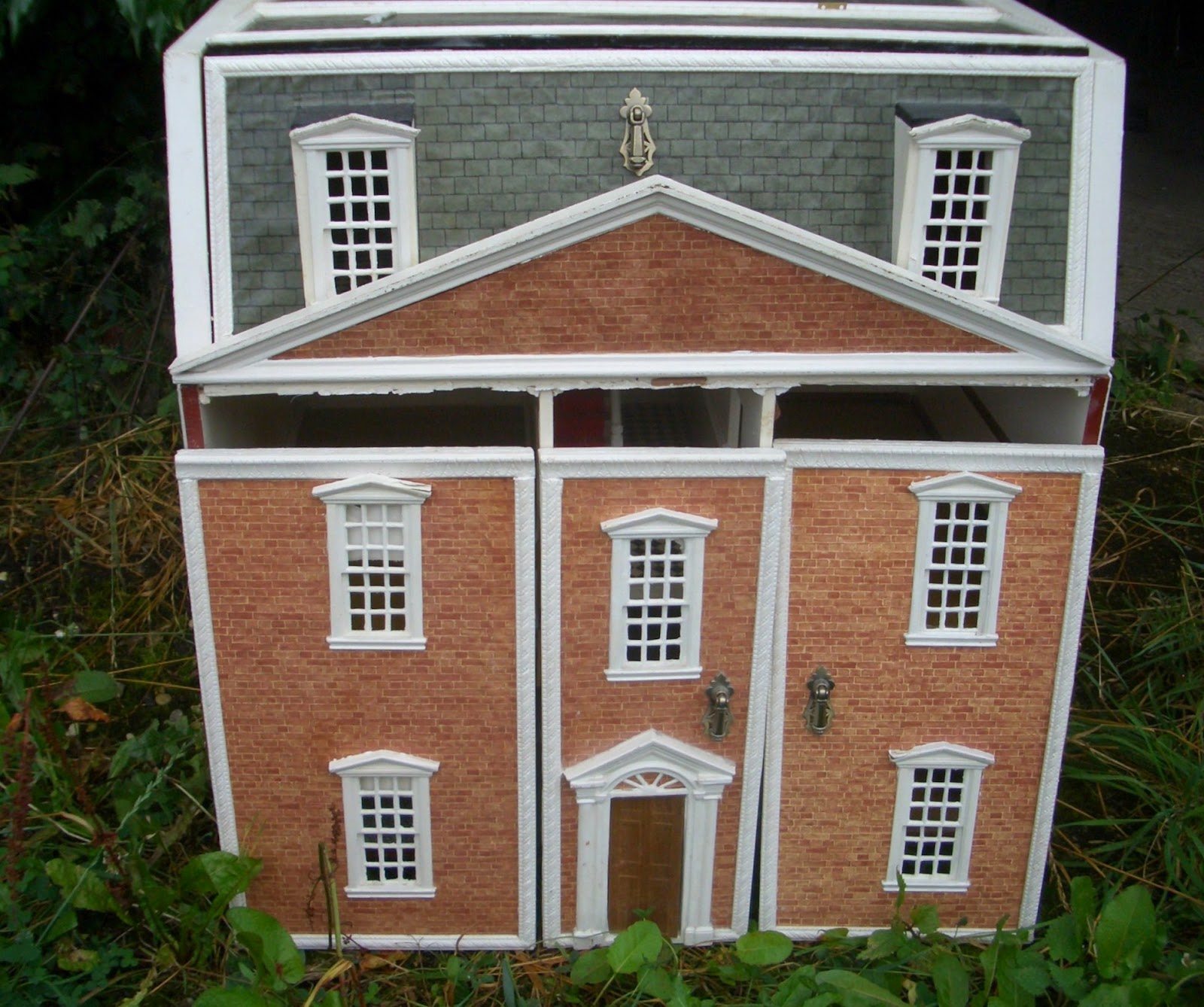 I think it's a homemade house, from a plan that must have been commercially available, because I have seen at least one identical house on ebay. Maybe someone recognises it? 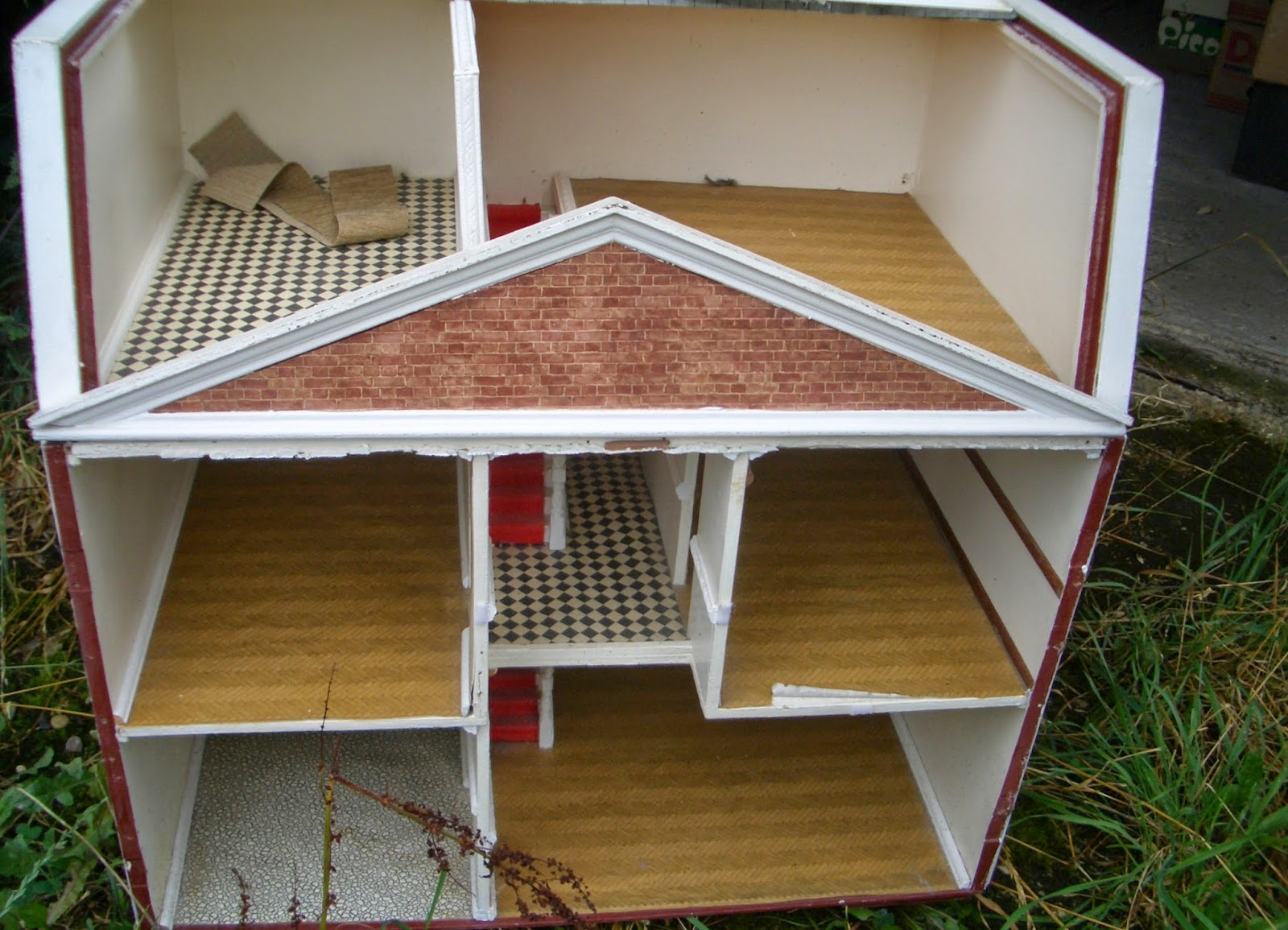 One of the first things to fall off was the triangular bit in front of the hinged roof.

Since the roof folded back far better without it, I was happy to leave it off. The next thing I removed were those silly door knockers......

The staircase was easily removable, as was the wall partition on the ground floor. To begin with I had dreams of a central staircase, dividing into two directions on the first floor but in the end the tricky logistics won and I decided that it would in any case be far more fun to have to have a working lift.

You may remember my post entitled "Unhinged" (the title of which caused all sorts of problems when being put into Czech. Puns don't translate well....) This was one of the two houses causing all the problems. Deciding to leave the solution to my Dutch friend Irmel - she of the thatching skills - was definitely the right choice. I had spent considerable time trying to make the large external doors hang properly - the centre one was supposed to fold back onto the lefthand one - and reattach the roof with more than just the two mini hinges that were supposedly holding it. 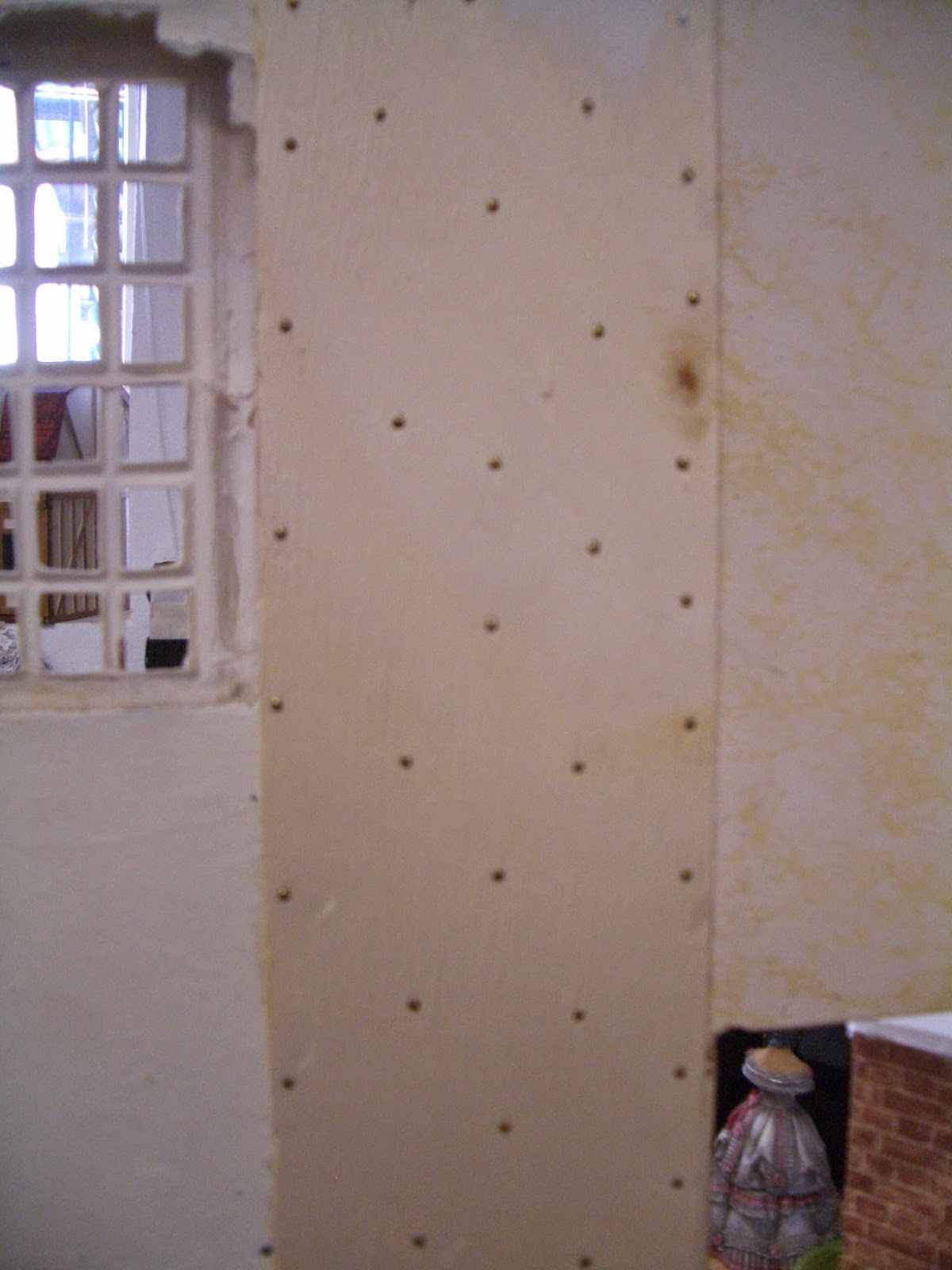 She took one look at the construction and said that we needed to join the two doors together, and that a piano hinge would be no use for the roof since there was nothing to screw it into. Many tiny panel pins were involved in joining the doors - the piece of wood looked as bit as if it had measles but a coat of paint soon dealt with that.

She considered the problem of the roof for a while - it was essential that it should open easily since I needed to put at least two departments up there - and remembered that she had once seen strong leather strips used where hinges could not be attached. No sooner said than done. In my store cupboard was a bag full of leather remnants, gathered in the dim and distant past from a skip in Soho, and we found a long enough strip to attach with strong glue and more panel pins. No photo I am afraid but the roof has been opened many times during the course of the summer and the leather is holding up just fine.

Before Irmel arrived I had removed the doors completely and had two large holes cut, taking out the small bottom windows so that I could install shop windows instead. Jean Nisbett's delightful book Dolls' House Shops, Cafes and Restaurants features a department store based in a house very like this one and the windows are a straight lift from her book.

I am the first to admit that I am not a precision worker. In fact "bodger" would be a far more accurate description. I see fairly clearly what I want to achieve but have not got the patience for painstaking measuring and preparing. I should have learned by now that taking shortcuts is often the longest way round to achieving what one wants but hey - old habits die hard, if they die at all!  Every Alexander Technique teacher (which is what I am in another life) knows that.

This style of working explains why cutting the acrylic sheets to cover the houses last summer was so challenging for me. (After rereading that blogpost I am not sure whether to be pleased or annoyed to be able to report that I have now removed almost all the protective coverings from the houses since the Czech visitors are so well behaved, even the smallest of them, that they have proved unneccessary....)

Making the display windows for the shop is a prime example of the pitfalls of this way of working. In fairness to me, it also did not help that the carpenter who had cut the holes had managed to create two different-sized gaps neither of which was completely straight.

I intended to use foamboard, also known as foamcore, since one can cut it with a craft knife or scissors and in theory is much easier to work with than wood. 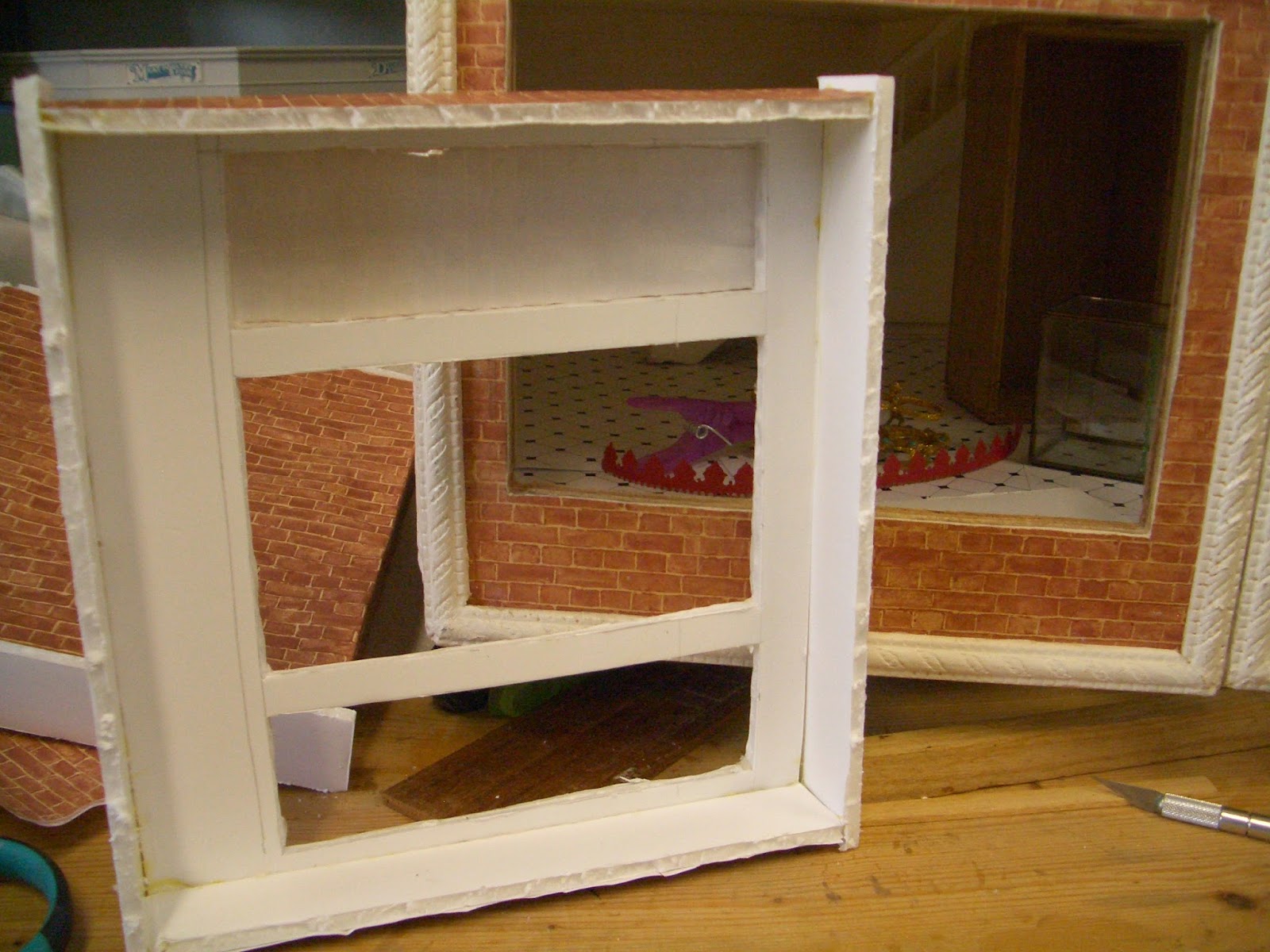 Fortunately I had some rolls of the same wallpaper as the house was covered in so I glued it on and then cut holes in it for the windows. 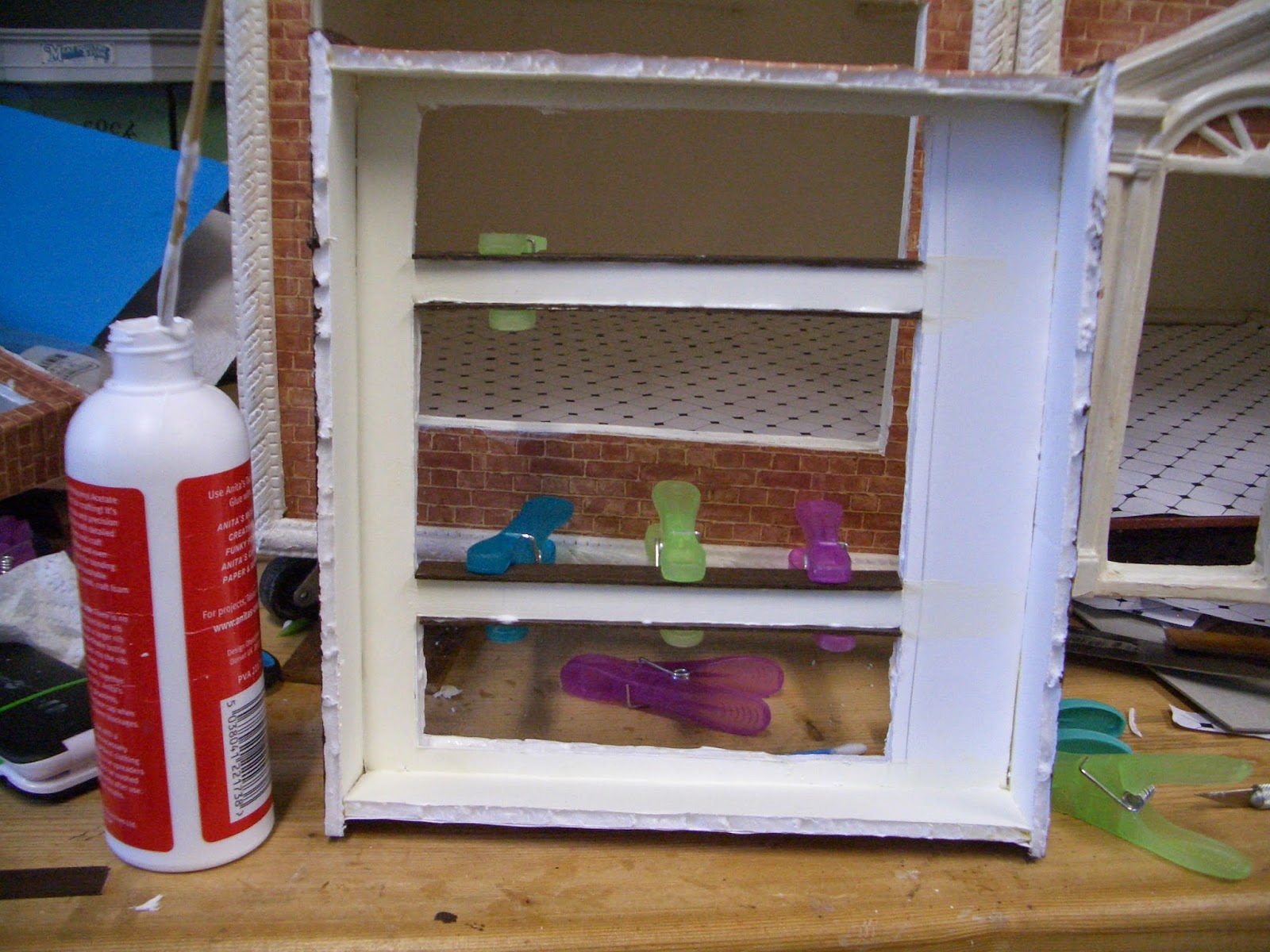 I then used one of my favourite materials - coffee stirrers quietly borrowed from ferries, hospitals, supermarket cafes etc to make the window frames - in the photo you can see one of the miniaturists most essential tools in action - clothes pegs. And that's a kebab stick poking out of the top of the glue bottle. 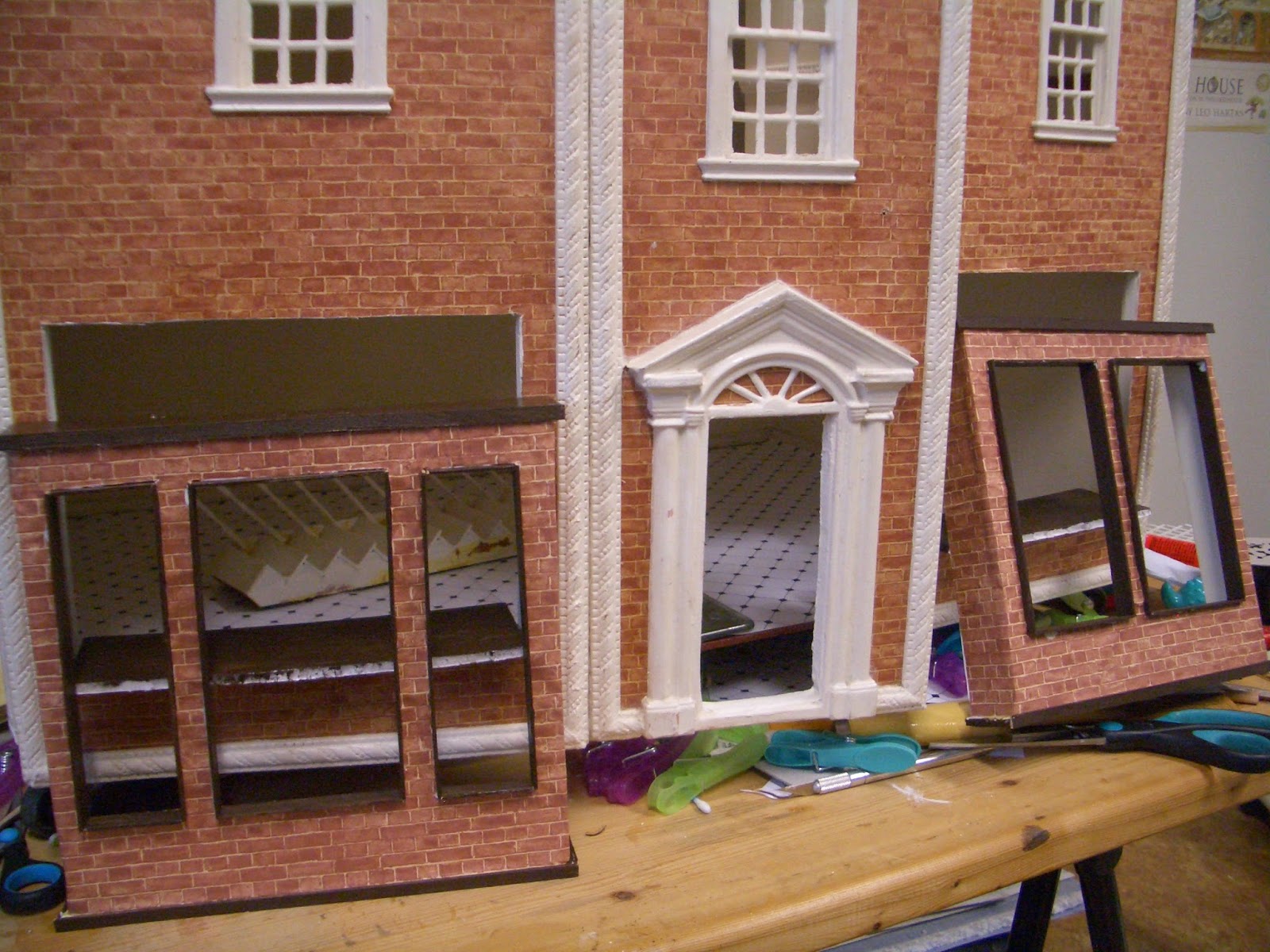 Note the ragged edges of the foamboard. It's nonsense to say it always cuts smoothly. Not when I have anything to do with it. However eventually the windows were finished and I presented them up to the house. 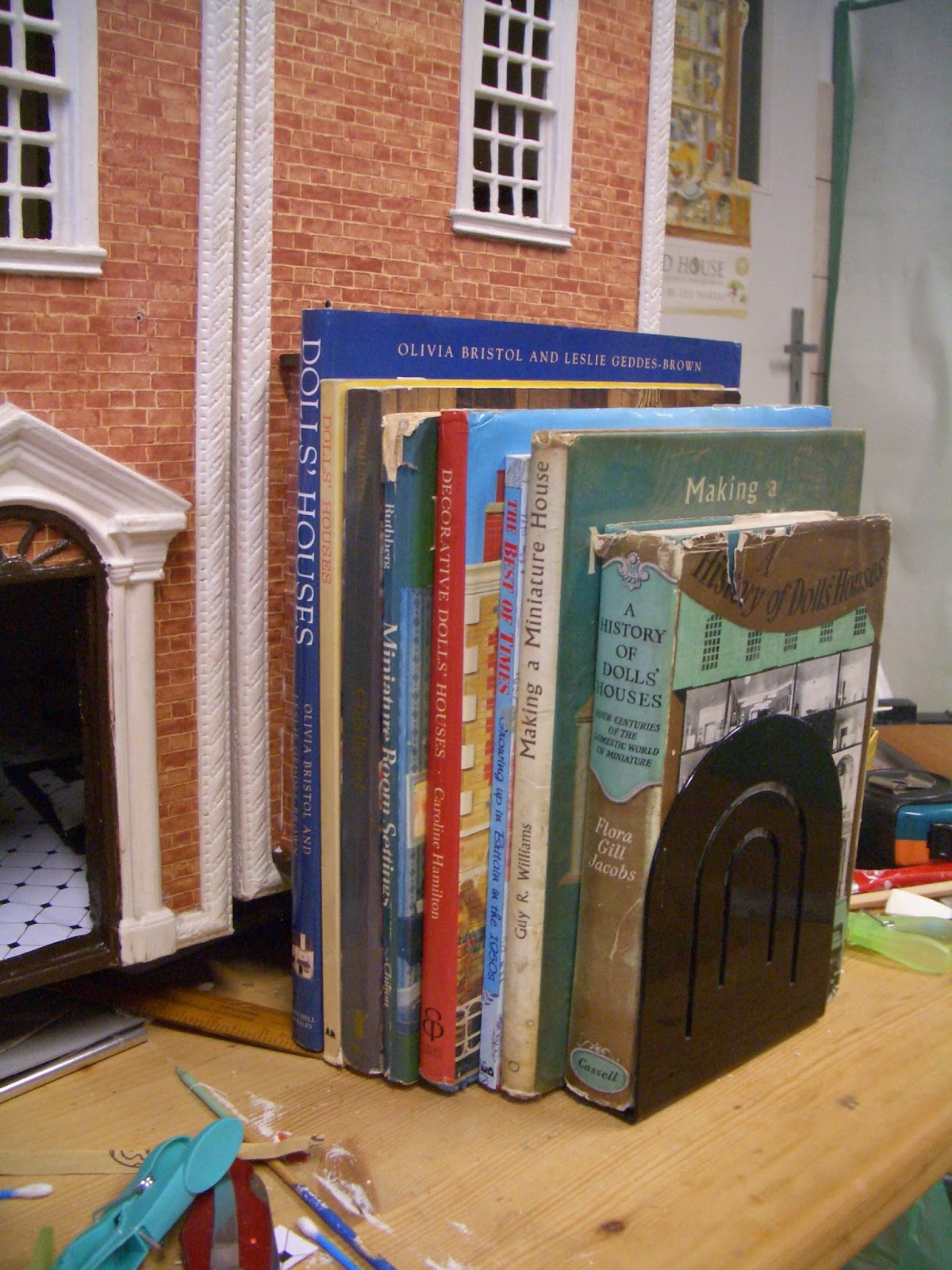 But how to put pressure on them whilst they were gluing - particularly since those rough edges meant an uneven fit and the house was too heavy to lay on its back? Where there's a will, there is always a way - I am delighted to report that sideways pressure works too.....

I then realised I also needed an entrance door with glass panels in it. The one the house came with was a solid wood panelled door but being very stingy I decided to reuse it. After digging away at it for what seemed like an eternity I finally achieved something not unreasonable. 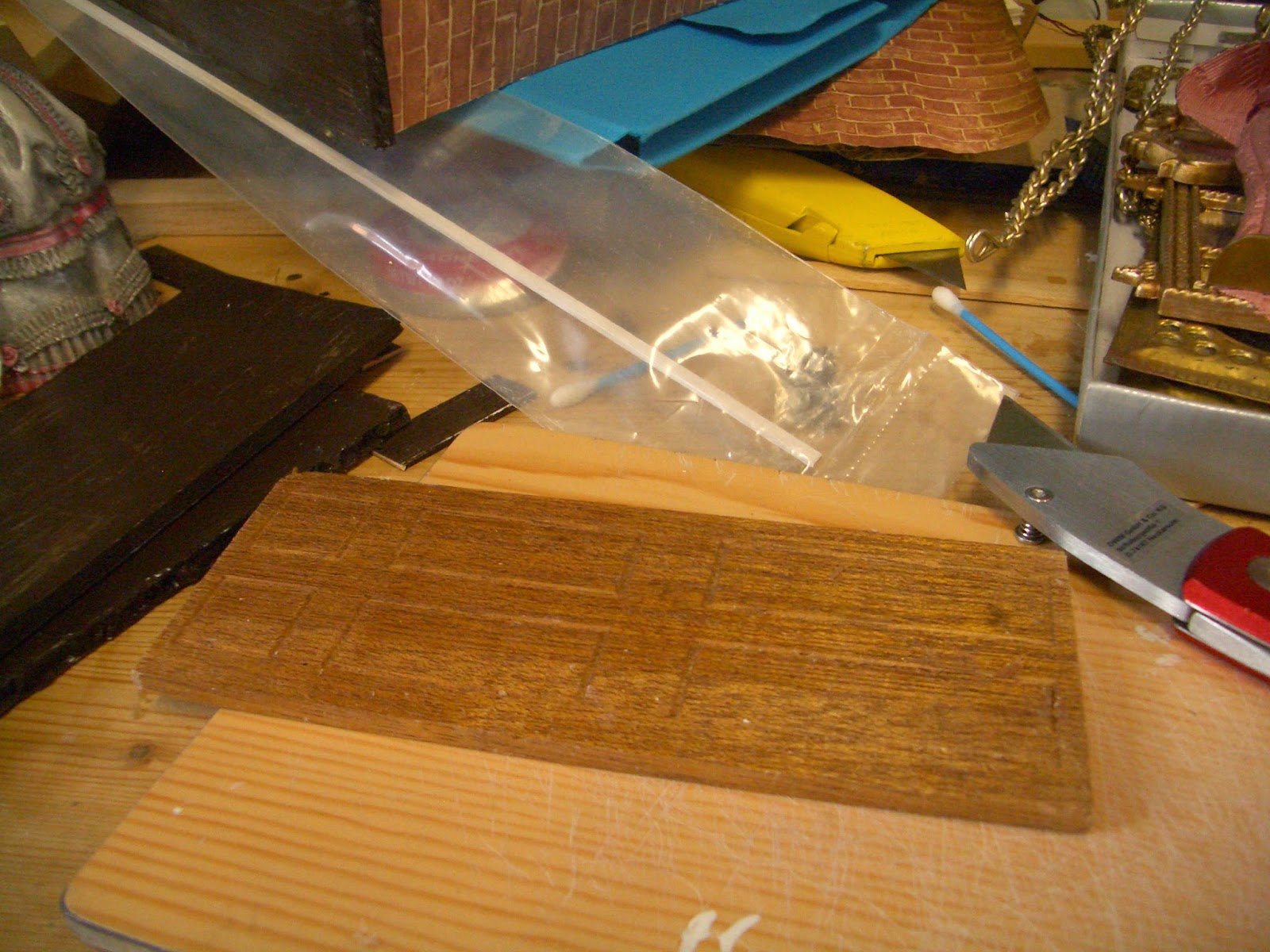 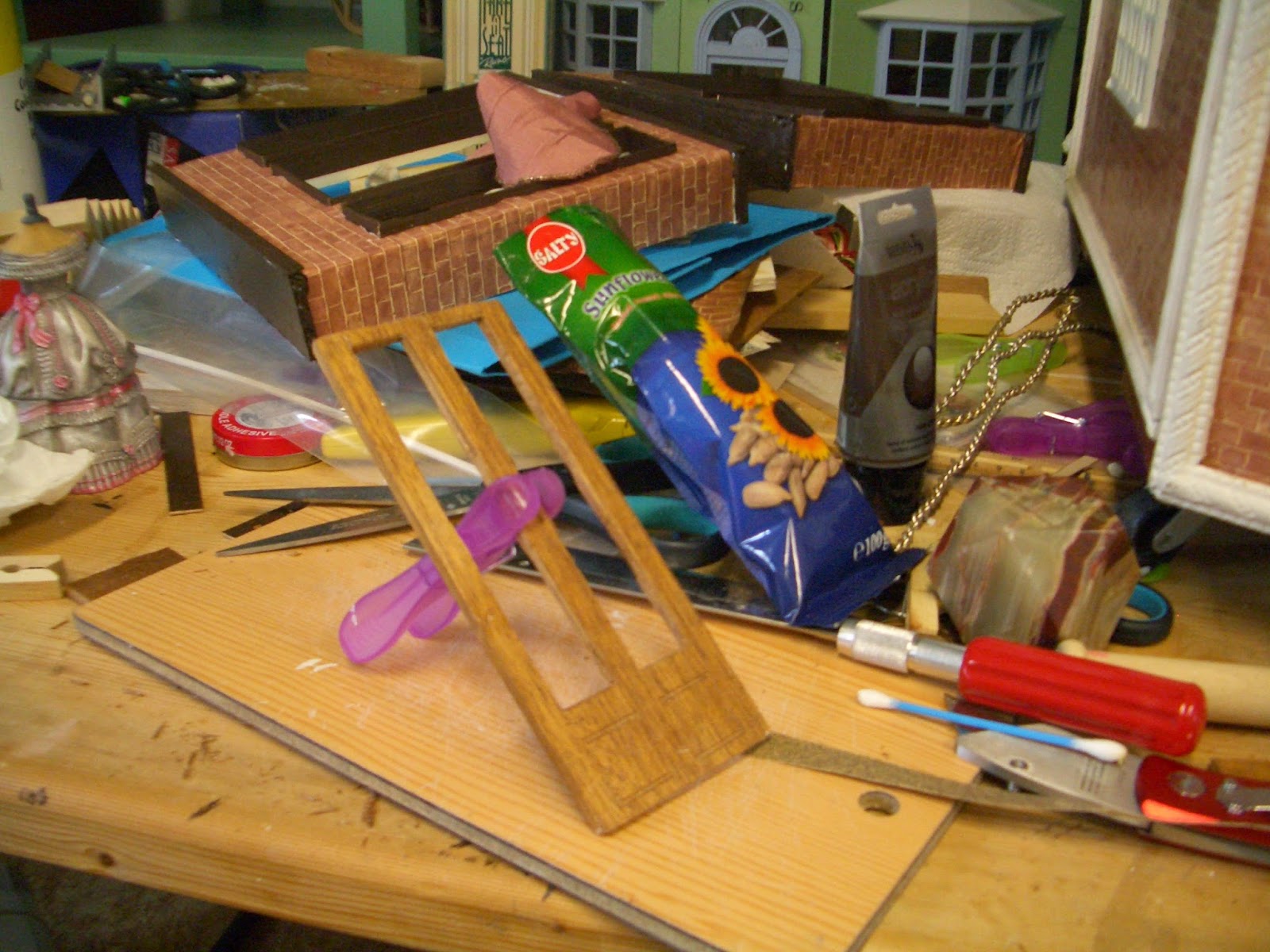 At least it fitted in the space properly - in fact I still haven't got around to hinging it although Gosthwaites has been open for custom for some time already..... 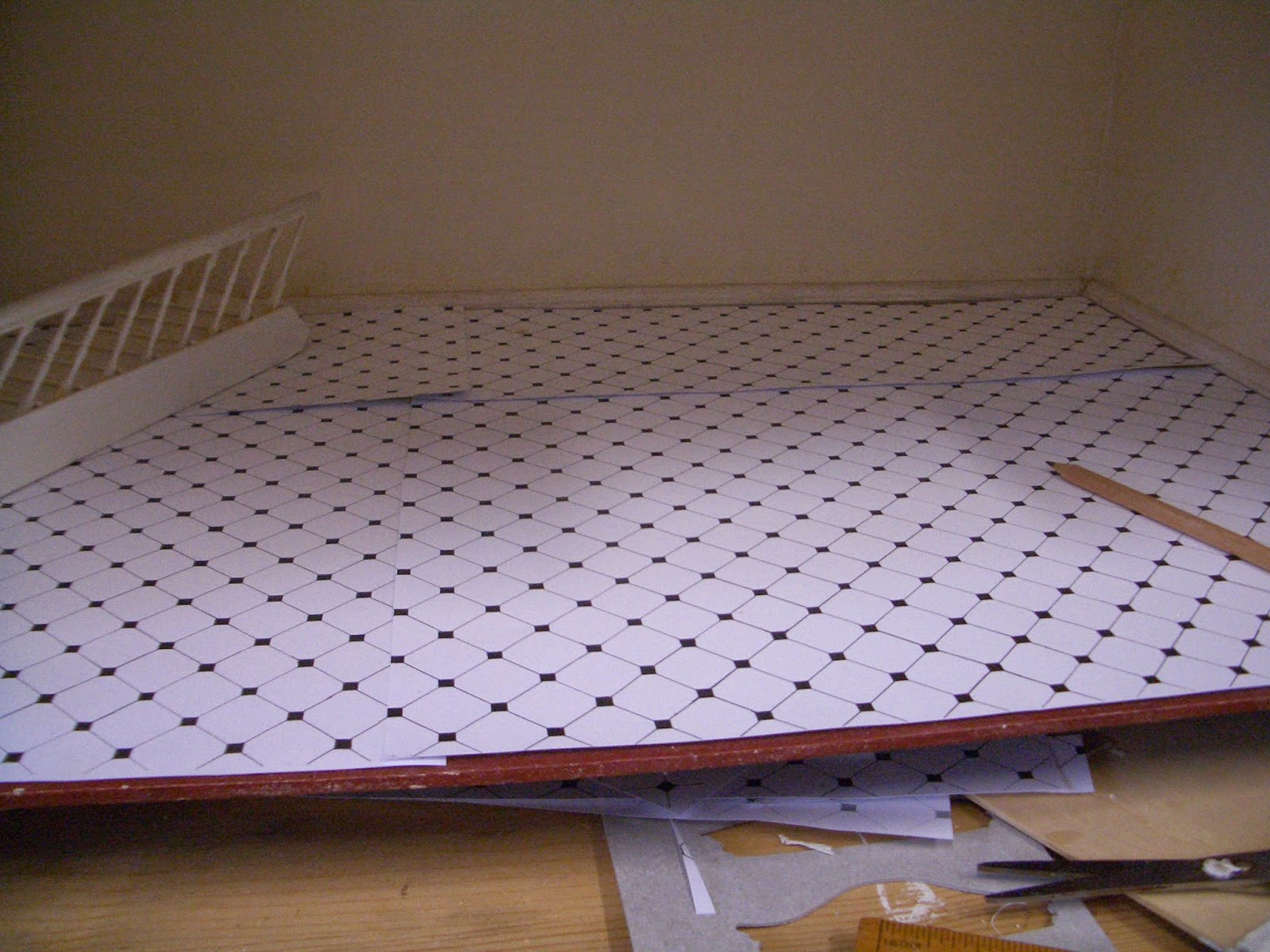 Meanwhile, inside, all the old paper coving and flooring had been removed and part of the staircase moved to the back for those customers who might be lift-phobic. Fortunately the walls did not need repainting - by now I was desperate to get on with filling the store with luxury goods for sale - but it did need some flooring. That was easily solved by a quick visit to the local copy shop for some A3 copies of black and white tiles found on line. They went in all over the shop. I should say at this point that pattern matching is another of my bugbears...
So now all that remained was to cut a hole for the planned lift. A handy cigar box of the right size was to form the basis for this and the lift decoration was in the capable hands of Butterfly thank goodness. I reminisced to her about the golden lifts in Selfridges I could remember from my childhood and asked her politely to produce something along those lines. In the meantime I thought I could cut the holes through the two floors. Hmmm.......
In the end it was very fortunate that Anna Šlesinger, the doll lady, was visiting with her husband. I dragged him away from his furniture-restoring task at Butterfly's workstation and implored him to have a go at accessing the almost impossible angles needed to saw the holes. "Had I known what you would need " he said plaintively at one point, "I would have brought the right tools for this job..."
In the end he was successful - diky moc Jiři- and Butterfly had somewhere to place her much-gilded salute to the golden days of Selfridges. But more of that next time - if I give you the link to her post describing it then too much of the interior of Gosthwaites will be revealed before we are ready to open.
So I will just leave you with a picture of how the store looked when we opened Small Worlds to the public in June this year - incomplete, but well on its way to opening. 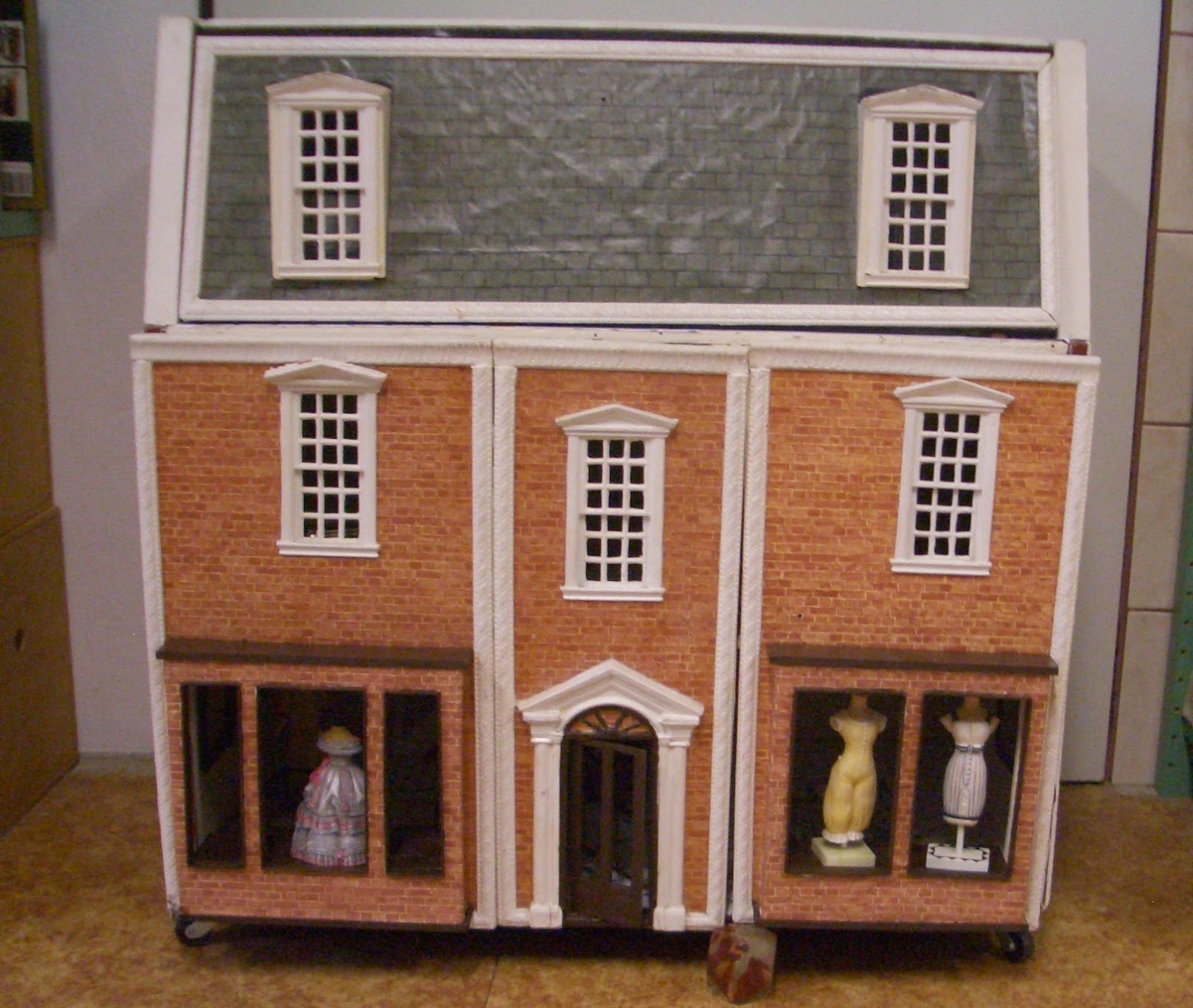 You will notice that those blessed doors still don't hang properly!
Thank you for reading along so far. I shall try to complete this saga next week - I now realise why it has been so tricky to pull together. The development has been happening over several months which means that the photos are scattered all over the place and need much hunting down. Next time I shall produce a folder into which to tuck an on-going project.
But do join me again soon for the really fun part of creating a department store - deciding what to sell and how to display it.